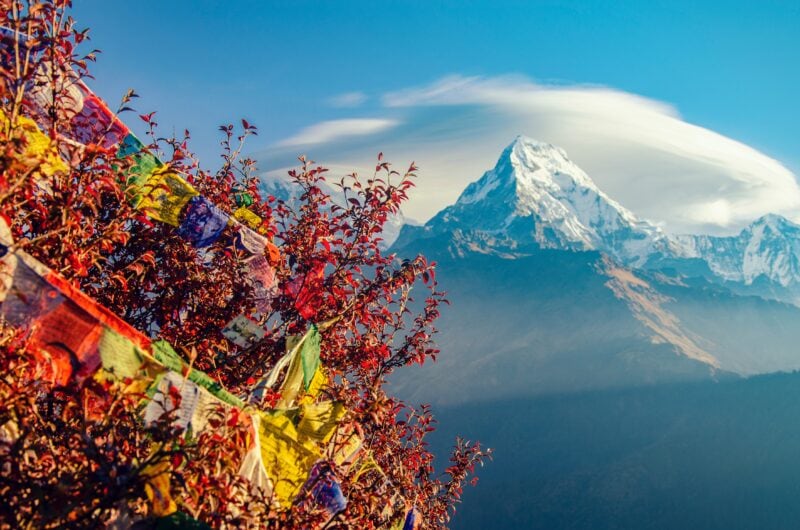 Nepal is famous for its unique and distinct culture, which is reflected through its people, festivals, and popular landmarks that leave a lasting impression on the people visiting the place for an experience. That being said, the country is packed with religious and cultural landmarks that are spectacular and boast their absolute beauty.

If Nepal is on your travel itinerary for the upcoming holidays, here are the 10 must-visit temples and cultural attractions of the country that will make your vacation unforgettable. 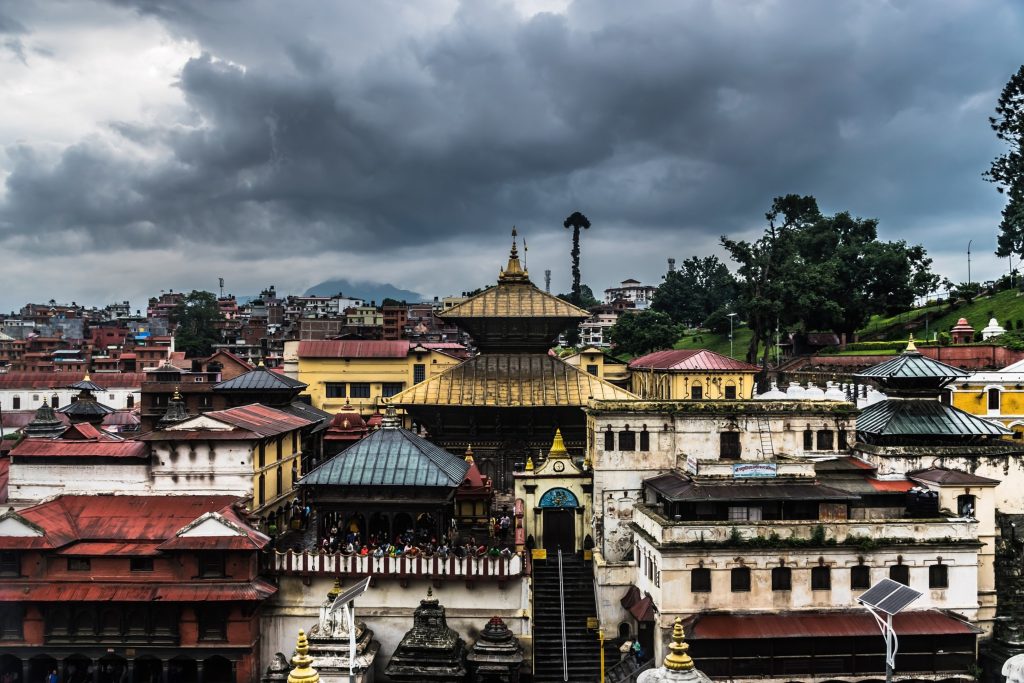 Shri Pashupatinath Temple in Kathmandu, Nepal is a famous and sacred Hindu temple that is located on the banks of the Bagmati River. The temple is dedicated to Lord Shiva and is one of the oldest temples in Nepal that dates back to 400 AD.

Besides religious significance, Shri Pashupatinath Temple in Nepal is an architectural masterpiece that features cubic constructions and wooden rafters. There are four wooden doors wrapped in silver sheets that facilitate the entry to the temple. Its roof is made from copper with gold plating. The main idol at the temple is a Mukhalimgam with a silver serpent. It has four faces facing four directions. What is unique about the temple is that its main idol is always dressed in golden attire except for when any specific rituals are performed. 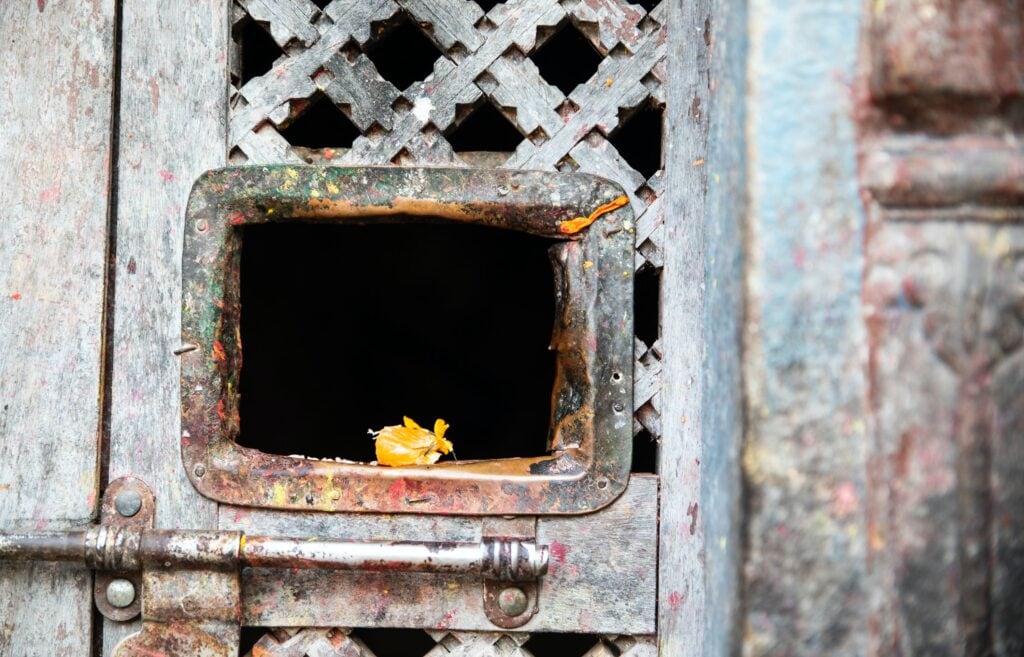 Changu Narayan Temple is also among the famous oldest temples in Nepal that was built during the reign of the Lichhavi Dynasty. The temple is dedicated to Lord Vishnu, worshipped in the form of Narayan as the main idol at the temple.

Talking about the temple’s architecture, it is built in two-tied pagoda style and features four doors guarded by stone lions that facilitate the entrance to the temple. Additionally, the statues of King Phupatindra Malla and his queen are also positioned in front of the temple entrance. What makes the Changu Narayan temple a part of this list of famous temples in Nepal is the Narasingha statue that is intricately carved out of stone and is believed to be 1500 years old. 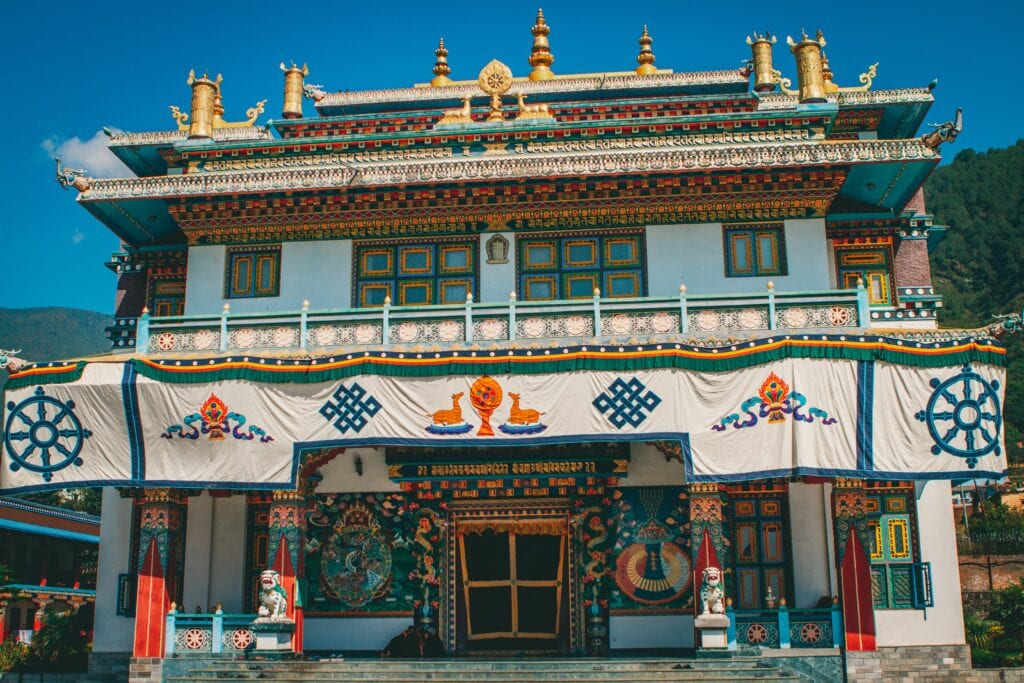 The famous Kali Temple of Nepal, Dakshinkali Temple is located on the southern edge of Kathmandu Valley and is famous for its main idol Kali, a ferocious form of Goddess Parvati that is intricately carved out of stone. Since Kali is the goddess to whom animals are sacrificed, such rituals are performed at the temple twice a week to please the goddess and get the wishes fulfilled.

Dakshinkali Temple was built in the 14th century during the rule of the Malla King. While the architecture is simple, it is nestled amidst a serene environment, making it a perfect site to include in your Nepal tour package. 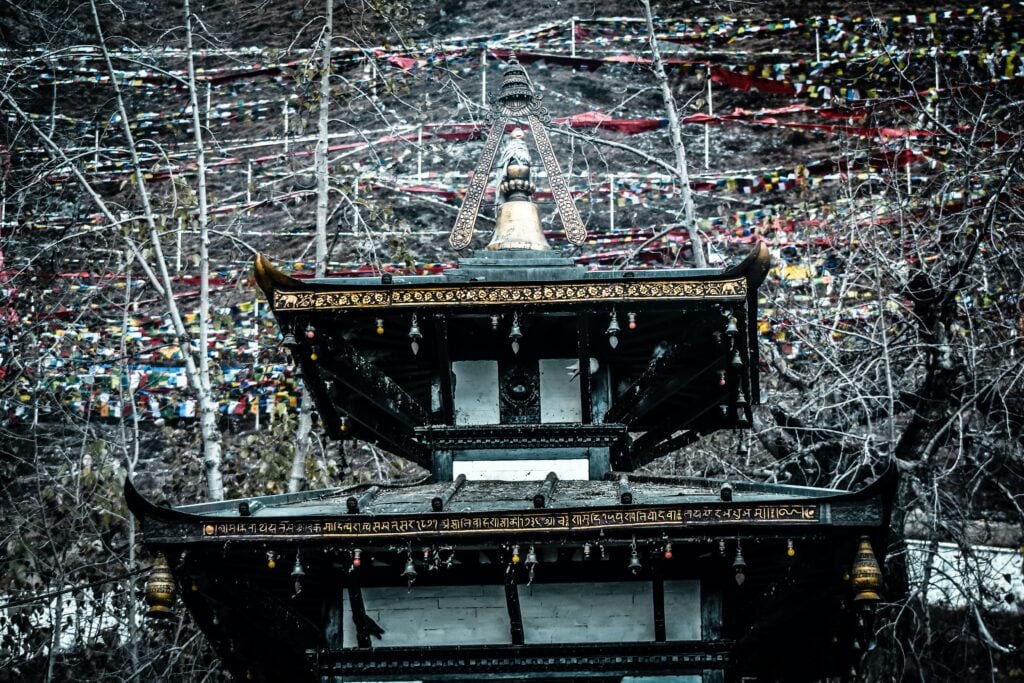 The iconic Muktinath Temple in Nepal sits on the lap of the snow-covered mountains at an altitude of 3710 metres. The temple holds a reputation for being one of the 24 tantric places in the country, making it a part of the list of famous temples in Nepal.

What is special about the temple is its main idol Sri Muktinath which is one of the holy shrines known as Svayam Vyakta Kestra. The idol is made of pure gold and is tall enough to match the height of a human. Besides, Muktinath Temple is the best place for people to learn and understand the culture and traditions of Nepal. 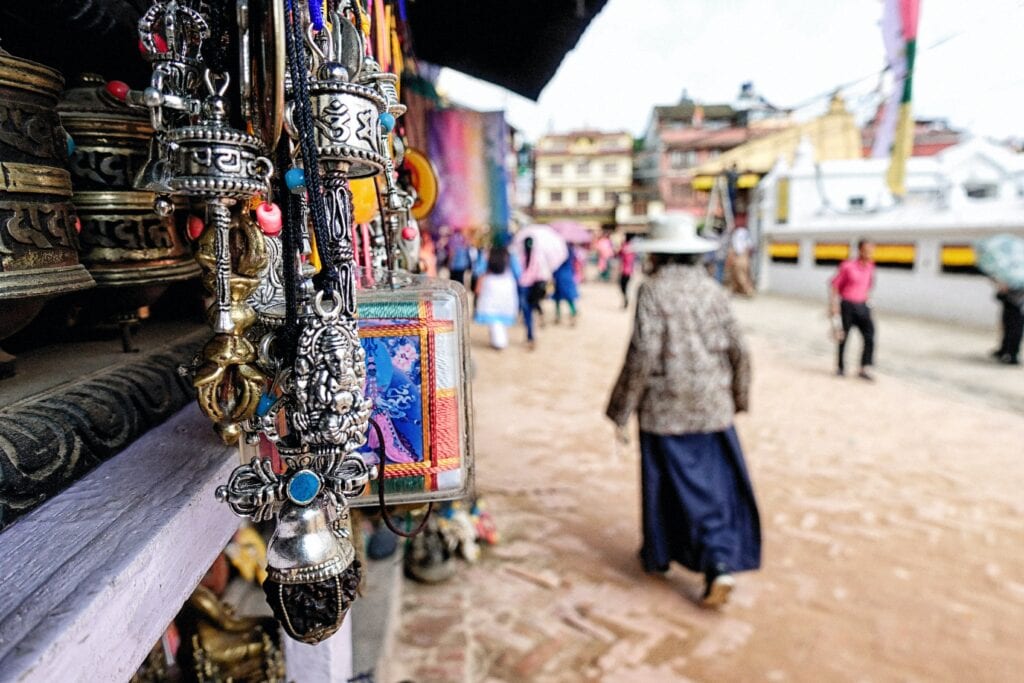 The famous Vishnu temple of Nepal, Budhanilkantha Temple is nestled at the foot of Shivpuri Hills and holds a religious significance not only for the people of Nepal but also across Southern Asia. It houses the biggest stone sculpture of Lord Vishnu lying on the bed of serpents. The statue is 5 metres long and is positioned in a lake that represents the cosmic sea. The idol is famous as the Sleeping Vishnu and has a history dating back to the 5th century.

Budhanilkantha Temple witnesses thousands of pilgrims every year on the occasion of Haribondhini Ekadashi that takes place between the months of October and November. This festival is believed to mark the awakening of Lord Vishnu from his sleeping position. 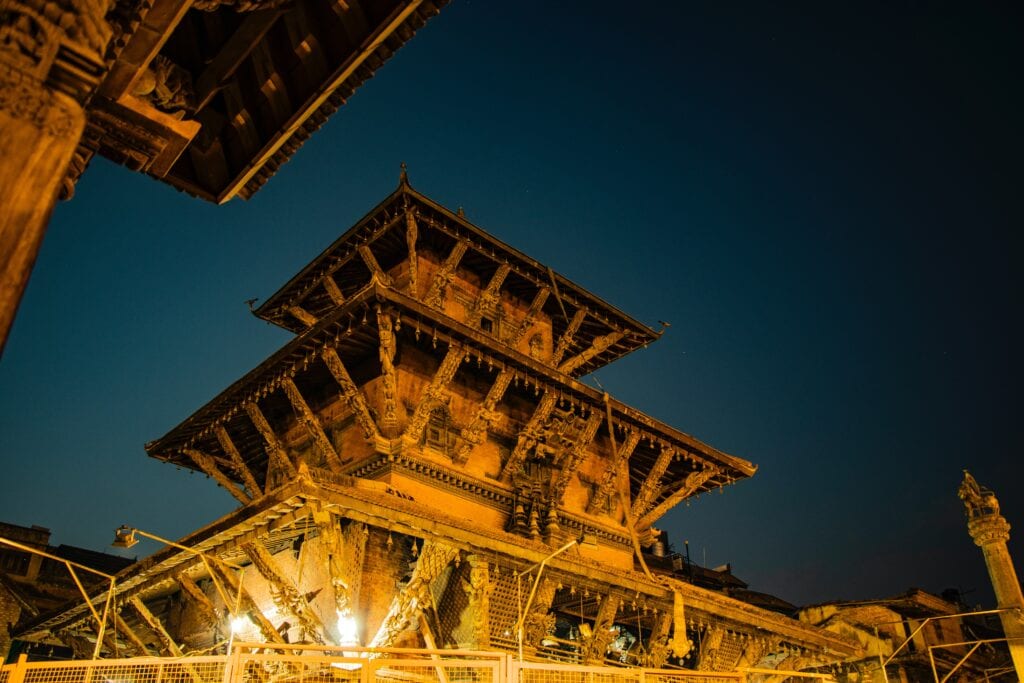 Manakamana Temple is the famous Hindu temple of Nepal that is known for fulfilling the wishes of the people who participate in the rituals. Goddess Bhagwati is the main idol of the temple, known to be the incarnation of Goddess Parvati.

Manakamana Temple is located 1,300 metres above sea level in Kafakdada Hill. The location is surrounded by lush greenery and overlooks beautiful mountain peaks, making it the perfect place for Nepal sightseeing. 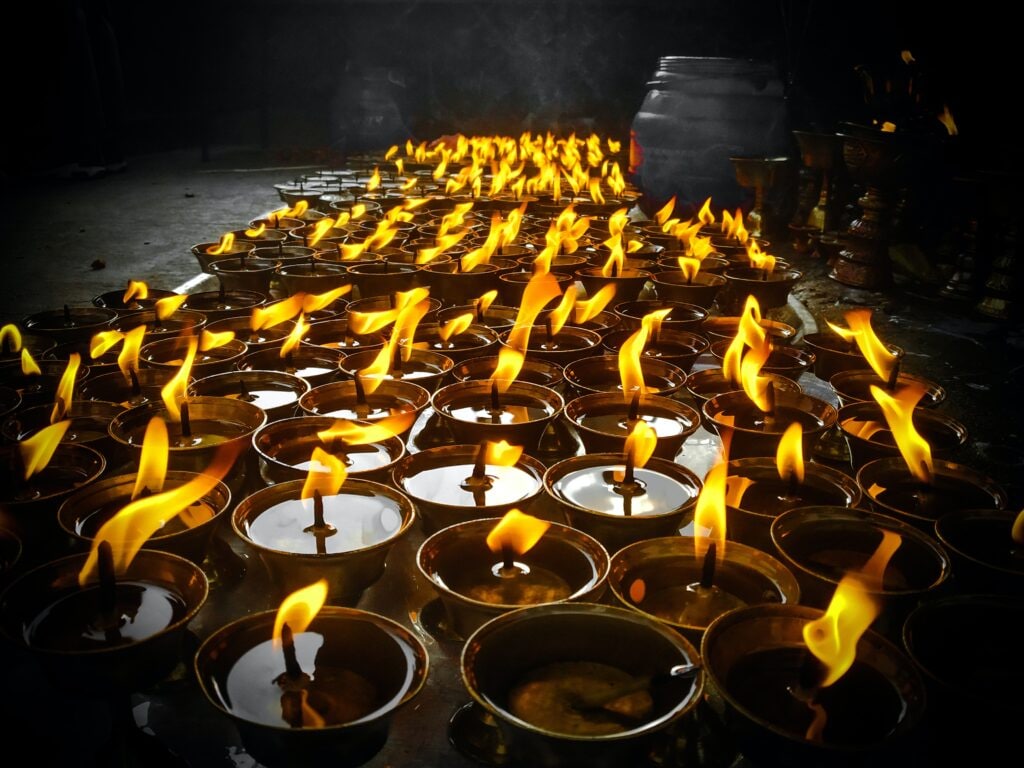 Doleshwar Mahadev is constructed in old pagoda style and is also known as Bimalesgwor, Sipare Mahadev and various other names as per the local language. The main idol of the temple is a huge Shiva Linga along with a huge statue of Nandi Bull, a trishul and other artefacts. Worshippers believe that paying a visit to the temple and offering milk to the Shiva Linga can help them receive lifelong blessings. 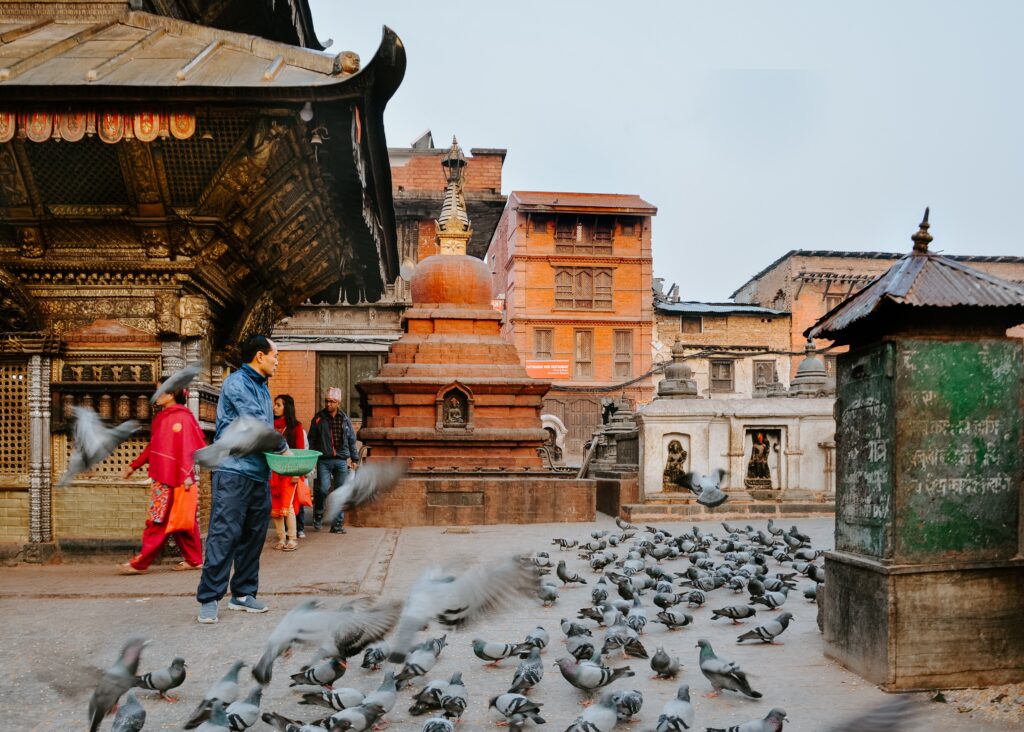 Frequented by tourists and pilgrims, Swayambhunath Stupa is a famous Buddha temple in Nepal that rests in a hillock in the Kathmandu valley. It is one of the most admired places in the country to soak up its cultures and traditions. What adds more value is the panoramic view of the city from the temple that is truly unforgettable.

According to some inscriptions, the Swayambhunath Stupa was built by King Manadeva in 460 A.D. The entire complex has a stupa, shrines and temple that belong to the Lichhavi Dynasty. It is an architectural marvel in the shape of a white dome that signifies planet Earth. 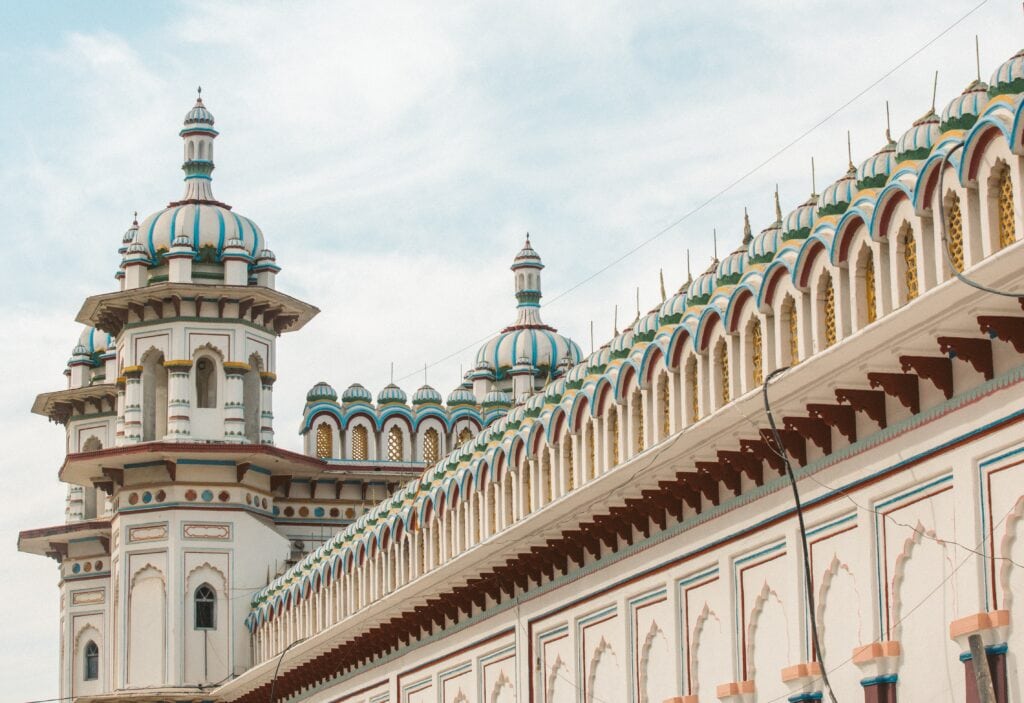 Janaki Temple is located in the Mithila region and is dedicated to Goddess Sati. It is among the famous and the biggest temples in Nepal that are frequented by tourists and pilgrims from across the country as well as India and Sri Lanka. Besides the daily rituals, Janaki Temple is beautifully decorated on auspicious occasions of Ram Navami, Diwali, and Dashaini and people gather to celebrate the festivals in full fervour.

Janaki Temple was built in the year 1910 by the Queen of Tikamgarh and its architecture reflects the intricacy of the designs from that time. It is a spectacular place that features domes, verandas, pillars with intricate carvings and beautiful paintings, and windows with coloured glass.

Last on our list of famous temples in Nepal is the Baglung Kalika temple. It is one of the famous religious sites of Nepal that is dedicated to Goddess Kali, a powerful form of Goddess Parvati who is the consort of Lord Shiva.

Baglung Kalika Temple is located inside a dense forest above the Kali Gandaki River. Locals believe that the temple was built by Pratap Narayan but it was renovated in the year 1990. It has a beautiful complex that includes other temples visited by both Hindu devotees and the tantrics from different parts of the world.

Nepal is a country with no dearth of temples and cultural landmarks. While the list is huge, we have tried to squeeze it down to 10 must-visit temples that you should include in your Nepal travel itinerary. Besides, you can also check out other tourist places in Nepal to experience other aspects of the country. 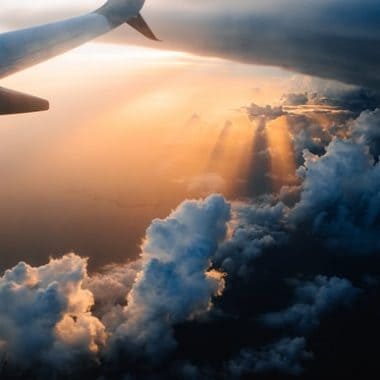 Which seat is better on a plane: Window or aisle?