One of the biggest journeys of spirituality that you can take in India is the Char Dham Yatra. Among the most famous pilgrimages in the country, this journey to the four abodes of the almighty brings you closer to inner peace; away from the chaotic city life, in a serene aura where only good thoughts reside. And, to make the most of it, you should definitely consider Uttarakhand tour packages designed specifically for this pilgrimage; some experiences are better enjoyed in unison.

The Uttarakhand circuit consists of Yamunotri, Gangotri, Kedarnath, and Badrinath as the four abodes dedicated to the almighty. Each of these Char Dham locations has a touch of uniqueness to them. Here’s what you need to know about these four dhams: –

The first of the four dhams in India, the Yamunotri is the source of River Yamuna that is located in the western part of the Garhwal Himalayas. Perched at a height of 3,291 metres in the Uttarkashi district of Uttarakhand, the Yamunotri Dham is dedicated to Goddess Yamuna. The temple opens on the auspicious day of Akshaya Tritiya in May and closes on the second day after Diwali i.e. on Yama Dwitiya for the winter. With the holy and serene ambience that is offered to the visitors, the temple has a majestic idol of Goddess Yamuna which is sculptured out of black marble. Other than being famous for the Char Dham temple, the destination is also well-known for the breathtakingly picturesque views that is surrounded with lush greens, vibrant meadows, and spurting cascades.

Honestly, visiting the Yamunotri temple is an adventure in itself – you have to trek for around 13 km followed by a 6 km walk. There are two trekking trails available for the same; one is on the right bank of the Yamuna River through the Markandeya Tirth and the other one is on the left of the river via Kharsali. Though horses and palanquins are available for the commute, trekking through the route with mesmerising sights and lush greens is a different feeling altogether. Not to forget, there are various stays and camps available near Yamunotri; Camp Nirvana being quite a popular one.

In India’s Hindu culture, there is one belief that everyone swears by – ‘Maa Ganga saare paanp dho deti hai’, which means, our holy mother, the River Ganga, will wash away all our sins. The Gangotri Dham, one of the holiest places of Char Dham tour, is the source of River Ganga or the Ganges. You will be surprised to know that the temple was constructed by Amar Singh Thapa who was a Nepalese General. The holy river originates from Gaumukh, which is located at the Gangotri Glacier. Although the holy river is called Ganga; at the source of its origination, the river is known as Bhagirathi. Here again, the temple opens on the propitious day of Akshaya Tritiya and closes on Diwali. However, when the temple is closed, the idol of Goddess Ganga is kept at a village named Mukhba near Harsil to allow for the Char Dham darshan of the idol. Along with the temple, you can also visit the Bhairath Shila which is said to be the holy rock where Lord Shiva was prayed by King Bhagirath. Also, make sure to visit the Pandava Gufa that is located around 1.5 km from Gangotri. It is believed that the cave is where the Pandavas (from the epic Mahabharata) meditated and rest while they were going to the Kailash Parvat. You have to trek up to the cave but it is totally worth the view. This Char Dham location will definitely bring you closer to the essence of spiritual salvation.

3. Kedarnath: One of the Twelve Jyotirlingas

One of the most famous Indian holy places, Kedarnath is dedicated to the mighty Lord Shiva. Located amidst the spectacular mountain-scape of the Garhwal Himalayas at the head of the Mandakini River, this place holds extreme importance to Hindu devotees. The Kedarnath temple is one of the twelve Jyotirlingas and is considered to be the highest amongst all. Since the temple is located in the Rudra Himalayan range, due to extreme weather conditions – it opens in April again on Akshaya Tritiya and is closed on Kartik Purnima in November.

When the Char Dham temple is closed during the winters, the idol of Lord Shiva is bought to Ukhimath where he resides for the next six months and devotees pay their visit. Along with the temple, the Kedarnath trek is also pretty famous because of the alluring views that if offers. Of course, the trek might be a little difficult and tiring. Once you see the snow-capped mountains and the clear blue sky, you will forget everything and lose yourself into its embracing beauty.

Lastly, conclude the Char Dham yatra with yet another mesmeric location, the seat of Lord Vishnu –Badrinath. Along with being one of the four abodes of the almighty, the Badrinath Temple is also one of the 108 Divya Desams. Elevated at an altitude of 3,133 m i.e. 10,279 ft. above the sea level, the temple is constructed in the Chamoli district of the Garhwal hill tracks along the banks of River Alaknanda. Here again, due to harsh weather conditions, the temple is open for tourists’ Char Dham darshan from the end of April to the beginning of November. It has a 1-feet-tall idol of Lord Vishnu’s Badrinarayan form which is sculptured out of black granite. To be honest, out of the four dhams, Badrinath is one of the most-visited Char Dham pilgrimages because of its various legends and mentions in the ancient texts.

Other Details of Char Dham Yatra

Reaching Uttarakhand is very easy – you can book a flight, train or bus according to your convenience. However, travelling to the Char Dham sites by train is not possible. The only way to reach the shrines is by road. So, make sure that you plan everything accordingly and book a cab beforehand for a hassle-free Char Dham tour.

Since the state of Uttarakhand is located in the mountainous region of the Himalayas; it is always a safer option to pack more warm clothes because nights are cold up there – especially in the shrine sites. Don’t forget to carry a jacket, shawl, trek pants, good pair for walking shoes (you have to trek a lot to reach the Char Dham temples), a cap, water bottles, and dry snacks for your ease.

The Char Dham yatra in the Uttarakhand circuit is considered to be one of the best travel destinations. Not only do you get closer to the feel and vibe of positivity and spirituality but also get to have a lot of adventurous treks and fun. For those worried about the Char Dham yatra cost, you can take a sigh of relief. There are a lot of customized packages available at the best price from which you can select the one that best suits your needs.

Let your worries drown in the abode of the almighty, let your mind wander into good thoughts and your heart and soul attain the spiritual nirvana with the Char Dham visit!

11 Must Visit Ancient Temples in Rishikesh 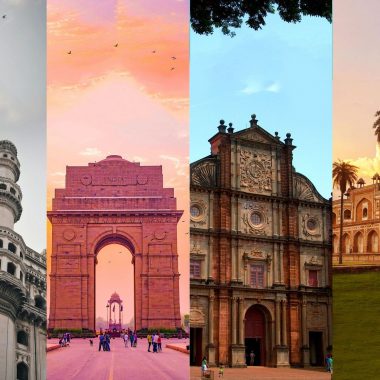 Take This Quiz: How Many Indian Monuments Can You Recognise?