India is a special country when it comes to cultural beliefs and religious faiths. The places of worship in India go way back in history and that is what makes them so special! A country that is home to an exceptionally large number of religious faiths, India is a secular country with no religion of the state. At the same time, India is also the birthplace of four of the world’s major religions; namely Hinduism, Sikhism, Jainism and even Buddhism.

Sikhism, however, has a substantial presence in the state of Punjab, Haryana, and Delhi. Besides a large number of the people from the Sikh community in these states, the state of Delhi is also associated with a special significance in the history of Sikh religion. Not only was the state the seat of power for the Sikhs during their peak, but it is also one of the very few places that have been blessed with the presence of 5 of the 10 great Gurus. And because of that, there are some of the most beautiful and historically prominent Gurudwaras in Delhi. What’s more amazing are the legends that are associated with each of these Gurudwaras.

Here are 6 of the most famous Gurudwaras in Delhi: – 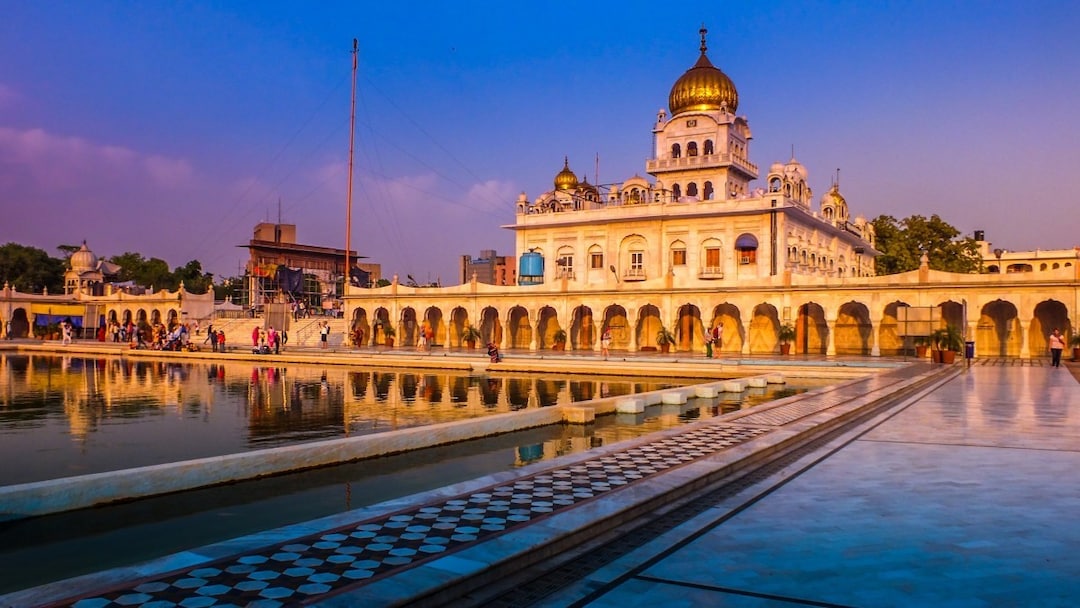 Renowned for its association with the 8th Sikh Guru, Guru Har Krishan, Gurudwara Bangla Sahib has been one of the most prided Gurudwaras in the state. It is also the biggest Gurudwara in Delhi. Built by the Sikh General, Sardar Bhagel Singh in 1783, the construction of this magnificent Sikh shrine was accompanied by 8 other shrines that year under the supervision of the Sikh General. Since its construction, Gurudwara Bangla Sahib operates all 24 hours and welcomes each and every one highlighting the large-hearted nature of the people of the Sikh community.

What’s surprising is the number of things the Gurudwara’s massive complex consists; namely the main prayer hall, the ‘Langar’ space, a hospital, higher secondary school, a library, the Baba Baghel Singh Museum and even the holy Sarovar. Now that’s quite rare!

If you wish to experience a direct connection with the divine power, walk into the Shabads and Paaths (sacred chants) happening 24 hours a day at the ‘Delhi ka Gurudwara’, Gurudwara Bangla Sahib! 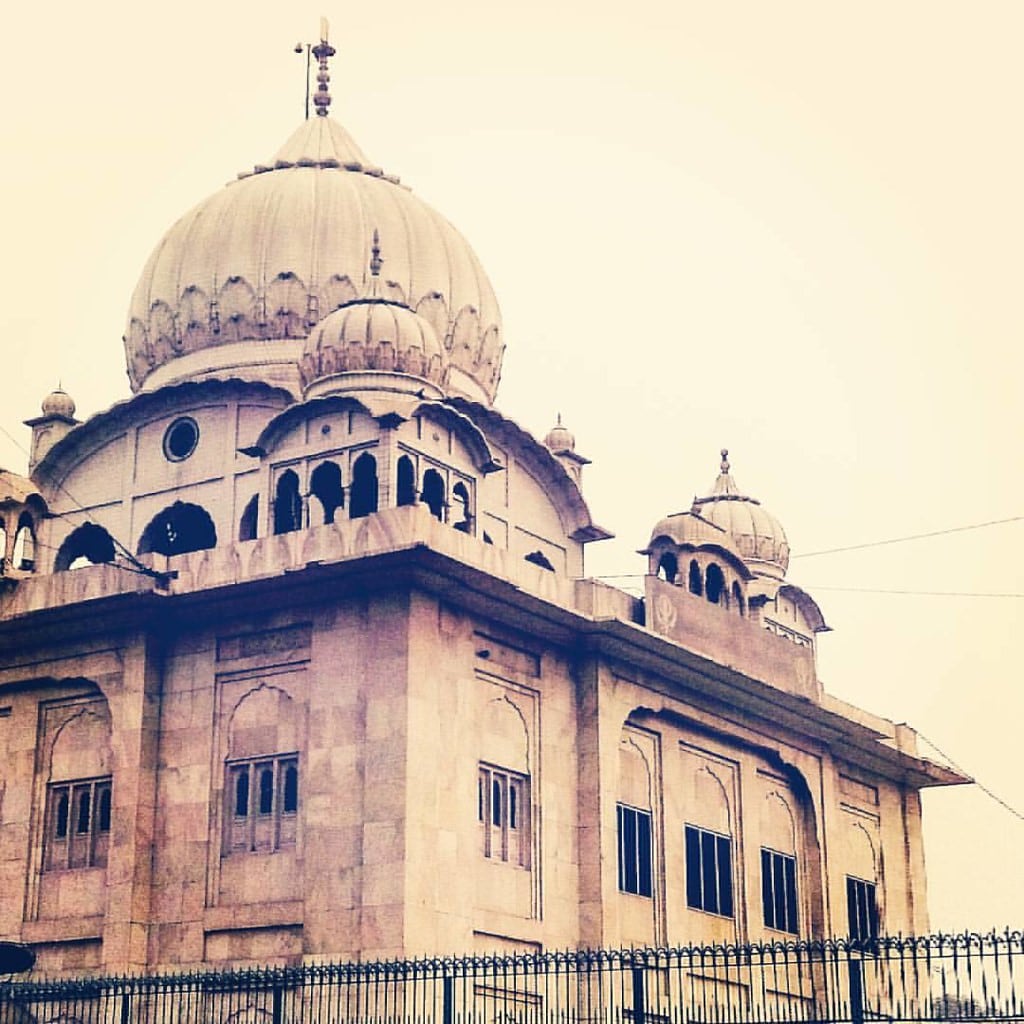 Constructed atop the Yamuna River is the Gurudwara Majnu ka Tilla. A famous Gurudwara in Delhi that was actually named after the man named Abdulla, famously known as ‘Majnu’ (crazy/passionate). Majnu was a man who ferried people across the river without charging them anything, all in the name of God.

Guru Nanak Dev Ji impressed with his devotion decided to meet him in the year 1505 during which he blessed Majnu and took shelter at the Tilla for a while. This was a time when many came to the Tilla to seek Guru Ji’s blessings and hence, the place came to be known as ‘Majnu ka Tilla’, literally translating into the Hillock of Majnu.

Typically included in many of our Delhi tour packages, Gurudwara Majnu ka Tilla is one place where you will experience a sense of peace and receive the strength to be able to help yourself and others around you! In the year 1707, when Guru Gobind Ji first stepped on the soil of Delhi, Gurudwara Moti Bagh Sahib was the place where he, along with the army, chose to rest.  It is also believed that Guru Gobind Singh Ji shot 2 arrows from this Gurudwara in the direction of the Red Fort where Prince Muazzam, later known as Bahadur Shah and the son of Mughal Emperor Aurangzeb, sat on his throne. The story unfolds that when the arrow first shot landed at the foot of the emperor’s throne; Bahadur Shah was astonished by the accuracy and declared it to be a miracle. But when the second arrow landed at the same place, the Prince had to acknowledge the skill and supremacy of Guru Ji’s archery.

Standing in the same spot from where Guru Ji shot his arrows can be regarded as one of the best experiences this Gurudwara in Delhi has to offer. 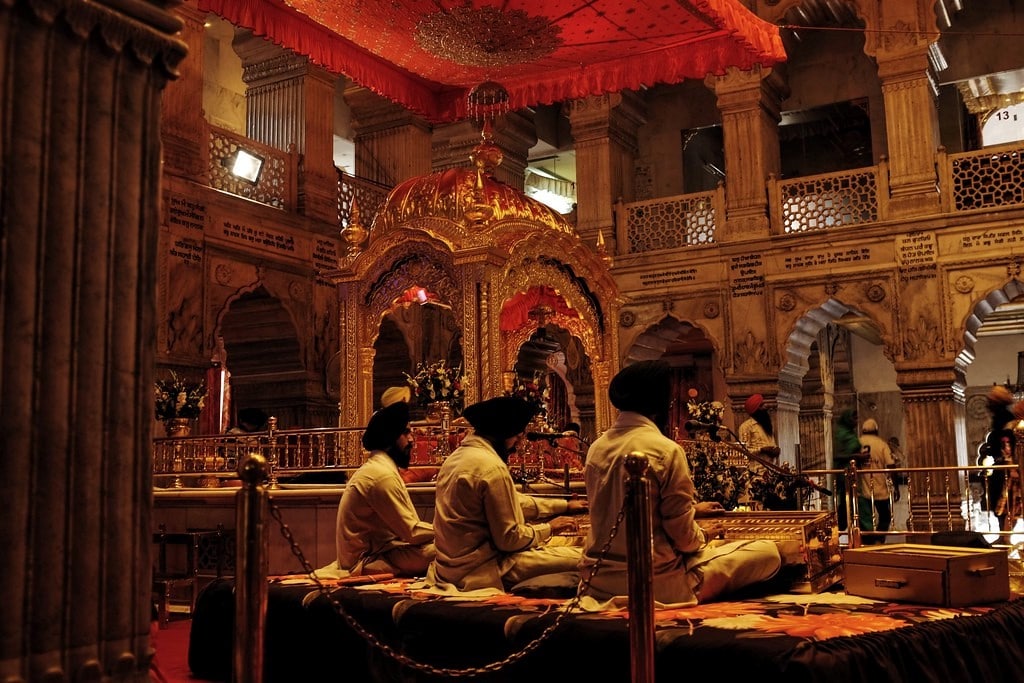 One of the most famous Gurudwaras in Delhi is the Gurudwara of Sis Ganj Sahib. One among the 9 historical Gurudwaras the were built by Military General Baghel Singh in 1783, Gurudwara Sis Ganj Sahib is situated in the famous Chandni Chowk area of Delhi. This Gurudwara marks the martyrdom site of Guru Tegh Bahadur, the 9th Sikh Guru. The Sikh Guru, on the order of Aurangzeb, was beheaded on 11th November 1675 after he refused to convert to the religion of Islam. However, before the emperor could display the body, it was stolen by one of Guru’s disciples, Lakhi Shah Vanjara and carried back to his house.

Gurudwara Sis Ganj Sahib is an extremely venerated place of worship for the Sikhs due to Guru Tegh Bahadur Singh’s example which highlighted the importance of steadfastness in religious beliefs and the defence of the community as a whole.

When you visit this Gurudwara in Delhi, do take out the time to savour its massive ‘langar’. 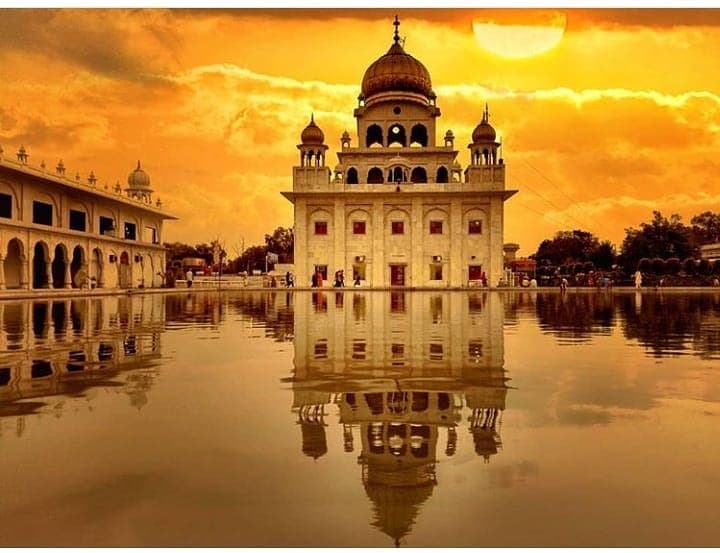 Gurudwara Nanak Piao Sahib has been built where Guru Nanak Dev Ji, during Sikander Shah Lodhi’s rule in 1505, had set up his camp. This is because, during Guru Ji’s stay, he had begun serving food and water to the passers-by. Guru Nanak Dev Ji, along with his disciple Mardana, took immense pleasure in serving the people in need. Both of them even set up a well to be able to serve water to all people that passed by, and hence, it became a popular place. Piao literally means to offer something to drink.

Once there was a group of people that came to Guru Ji while mourning for the death of their dear elephant,to that Guru Ji replied that the elephant wasn’t dead but was merely resting. What surprised the people was that upon checking, they realised that the elephant, in fact, was very much alive.

This news had spread like wildfire and also reached Sultan Sikander Shah Lodhi; who upon hearing asked Guru Ji to pay him a visit to his palace and bring back his elephant to life as well. When Guru Ji refused with saying that he was a ‘nobody’, that the death of the animal is God’s doing and none can interfere with that; enraged, Sikander Shah ordered the imprisonment of Guru Nanak Dev Ji.

During the time Guru Ji spent in prison, a profound impact could be observed not only on his fellow prisoners but even the prison guards. This was owing to his divinity and spiritual nature. Eventually, after the release of Guru Ji, he also asked for many other prisoners that were with him to be released as well. Such was the aura and holiness of Guru Nanak Dev Ji!

You would not want to miss Guru Ji’s death anniversary that is observed at the historic Gurudwara in Delhi. This place was marked by the meeting held between Guru Gobind Singh Ji with Bahadur Shah erstwhile Prince Muazzam, son of Aurangzeb in the year 1707. Bahadur Shah was on the quest of overthrowing his father to take over the throne. As he had failed to do so several times and was imprisoned for the same, he was eager to meet Guru Gobind Singh Ji so that they could together plan a strategy for Bahadur Shah to take over the throne from his brother after the death of Aurangzeb.

Not only did Bahadur Shah treat Guru Gobind Singh Ji with the utmost respect, admiration and regard, but he was honoured by the Mughal army. Despite the tortures that Sikh Gurus had to face at the hands of Mughals, especially Aurangzeb, for so many years, Guru Gobind Singh Ji had agreed to help Bahadur Shah as he believed his reasons to be fair, rational, and also in the interest of the masses.

Ranked very high amongst Delhi’s most famous Gurudwaras, you must pay a visit here when in town.

Steeped in historical references and legends, the Gurudwaras in Delhi permeate spirituality for a myriad of reasons. The overwhelming yet calm aura at these places of worship is something that you must experience if you plan on sightseeing in Delhi; it is divine in every sense of the word.