The festival of Dasara in Mysore is celebrated with a lot of pomp and show; from the grandeur with which the people of Mysore celebrate Dussehra to the rich cultural heritage that surrounds these festivities; festival time in Mysore simply cannot be missed. It has been about 400 years since the Mysore Dasara festival was first inaugurated by Raja Wodeyar, and till date, the Royals have managed to maintain the traditions. Even the celebrations still have that regal touch of the old days!

If you too have been looking for a good Mysore tour package to visit the City of Palaces, here are 5 reasons why you should make a plan for this Dussehra: –

1. To see the Mysore Palace when it is all lit up! 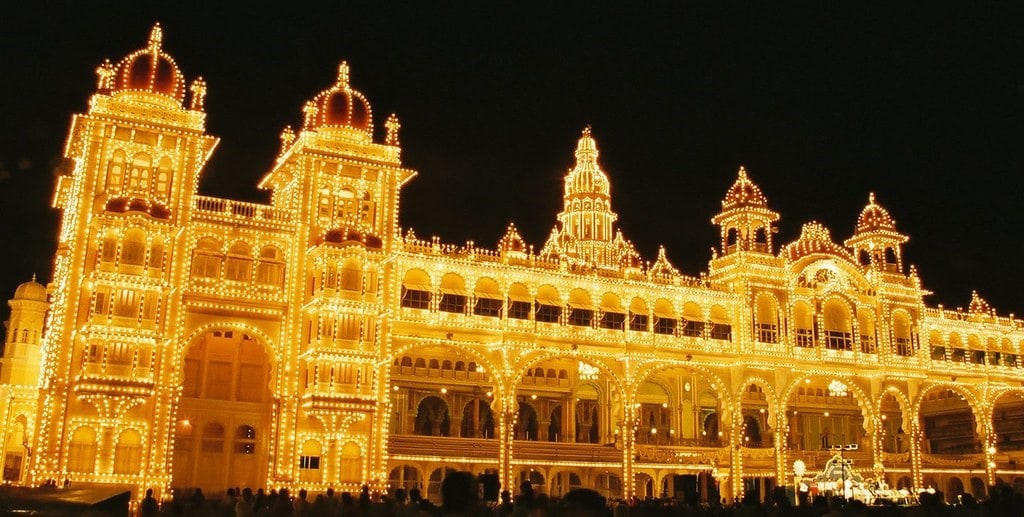 The Dussehra celebrations at the Mysore Palace are a feat of beauty that must be seen to be believed. The palace is the royal residence of the city, the seat of the Kingdom of Mysore, and the official residence of the Wadiyar dynasty. Located in the heart of the city, facing the Chamundi Hills, the palace showcases Indo-Saracenic architecture that also shows elements of Rajput, Hindu, Mughal, and Gothic styles.

Mysore Palace is a three-story structure that is replete with marble domes and a 145-foot five-story tower. It is also surrounded by a large beautiful garden and its entrance gate and arch are inscribed with the emblem and coat of arms of the Kingdom of Mysore, which, in turn, is surrounded by the kingdom’s motto.

As impressive the structure is throughout the year, Dussehra celebrations transform Mysore Palace into a fairy tale destination. Dussehra in Mysore Palace is celebrated by lighting up the entire place with more than 100,000 light bulbs. When it comes to celebrating Dussehra in Mysore, there is no doubt that Mysore Palace is a major highlight. The palace, in all its regal grandeur, is illuminated throughout the days of celebration. Adding to the whole experience are the amazing cultural performances by singers, dancers, and bands at this time.

The Jamboo Savari during Mysore’s Dasara is another highlight of this beautiful city’s Vijayadashami celebration. On the tenth day i.e. Dasara, Jamboo Savari takes to Mysore’s streets. This is the traditional Dasara procession, the main attraction of which is the idol of Goddess Chamundeshwari.

This idol is kept atop a golden mantapa which is approximately 750 kg of gold, which is then placed on top of a decorated elephant. Goddess Chamundeshwari’s idol is first worshipped by the royal couple and their invitees before being taken around in the procession that starts from Mysore Palace. This procession includes several elephants, horses, camels, colourful tableaux, dance groups, and music bands, and culminates at the Bannimantap where the people worship the banni tree.

The entire procession is full of verve as it travels through the city streets, spreading joy and zeal throughout the city. The passion and devotion that is showcased throughout the Jamboo Savari can transport you to the ethereal plane of celebration, which marks the singularity of celebrating Dussehra in Mysore.

The Jamboo Savari is followed by the torchlight parade, which, simply put, is a deserving finale to the celebrations. This is the last event of the festival and is a parade that is full of daredevil bikers, performers, and artists who regale the audience with their awe-inspiring stunts.

3. To indulge in the cultural extravaganza The fact that Dussehra or Dasara festival in Mysore was started back in 1610 AD by the Wadiyar King at the time (Raja Wadiyar I) lends the celebration a wistful element. The sheer cultural heritage that has come to be associated with Dussehra in Mysore and the traditions that come along with it are enough to ignite a feeling of awe among those who are visiting the city at this time. Apart from the highlight of the Jamboo Savari, the entire city is full of cultural programmes that are held at various important spots in the city, including the Mysore Palace, Jaganmohan Palace, Town Hall, and the Kalamandir.

These cultural programmes offer you the unique opportunity to take part in a celebration that lets you feel at one with the heritage of the city, all the while giving you a special insight into the traditions and culture of the city.

4. To witness the exhilarating exhibition 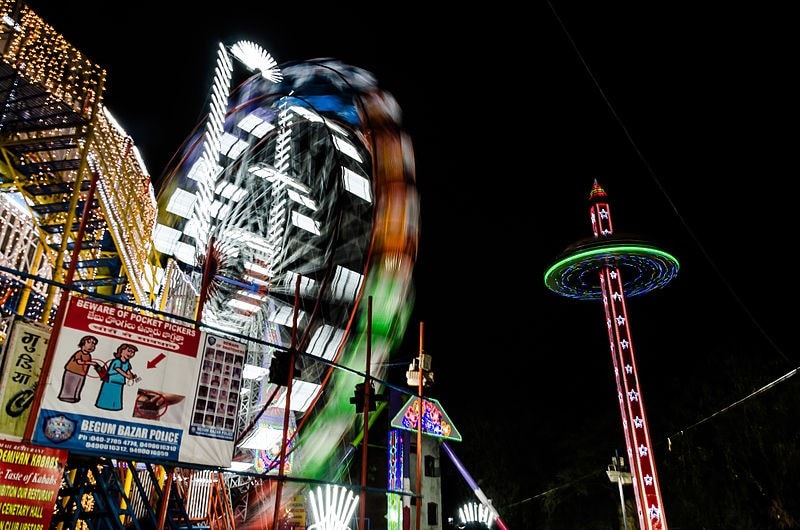 Another one of the major attractions that make celebrating Dussehra in Mysore quite the treat is the exhibition that takes over the city. The exhibition starts during the Mysore Dasara Festival and continues to cater to the population and tourists alike till the month of December. Apart from the local delicacies that you can try to satisfy your taste buds, the exhibition is significant for the sheer variety of items it has to offer for purchase. The exhibition is generally held in the grounds opposite the Royal Palace and also includes a Ferris wheel alongside other attractions. During Dussehra in Mysore, you will also get to experience the celebration of Durga Puja. In Mysore, Vijayadashami not only marks the victory of good over evil but also marks the day, when according to Hindu legends, Goddess Durga defeated and killed the demon, Mahishasura. This is also the reason behind the popularity of the Jamboo Savari during Dussehra in Mysore. The Goddess is celebrated in her warrior form as the people of the city proudly celebrate the warriors fighting for good, with ritual worship and displaying of their state sword and weapons during the days leading up to Dussehra in Mysore.

The Dasara Festival of Mysore is an all-encompassing experience for someone visiting the city at this time. Time it right, and you might end up celebrating Dussehra in Mysore, probably the most memorable one you’ve had till date!