“Not all those who wander are lost!” said J.R.R. Tolkien, creator of the different exotic worlds of the Middle Earth. Ambling around Cape Town feels that way. Cape Town is located on the southernmost tip of the African continent and was earlier referred to as the “Cape of Good Hope” by the daring explorers who set their sails out to connect Europe to the Eastern Orient.

Cape Town is literally the beach paradise you’ve been looking for! Indeed, there is a fiesta of beaches in Cape Town within South Africa’s Western Cape Province that has a whopping 1000 kilometres of coastline, ranging from exotic to regular manmade beaches, all very breath-taking amidst Cape Town’s natural beauty. Without further ado, let’s take a look at a few of the most sublime beaches to visit in Cape Town: – The picturesque granite cove of Llandudno on the Atlantic Seaboard of the Cape Peninsula is one of the best beaches in Cape Town. Apart from being the city’s most naturally diverse beaches, it falls in one of the most affluent neighbourhoods of Cape Town. Surfers as well as the general public throng the beach, laze around, sunbathing, and swimming. However, the water here is extremely cold so check before you go ahead and take a dip! Nearby is the Sandy Bay, which is an isolated beach that has a bit of a reputation as a nudist or topless beach. 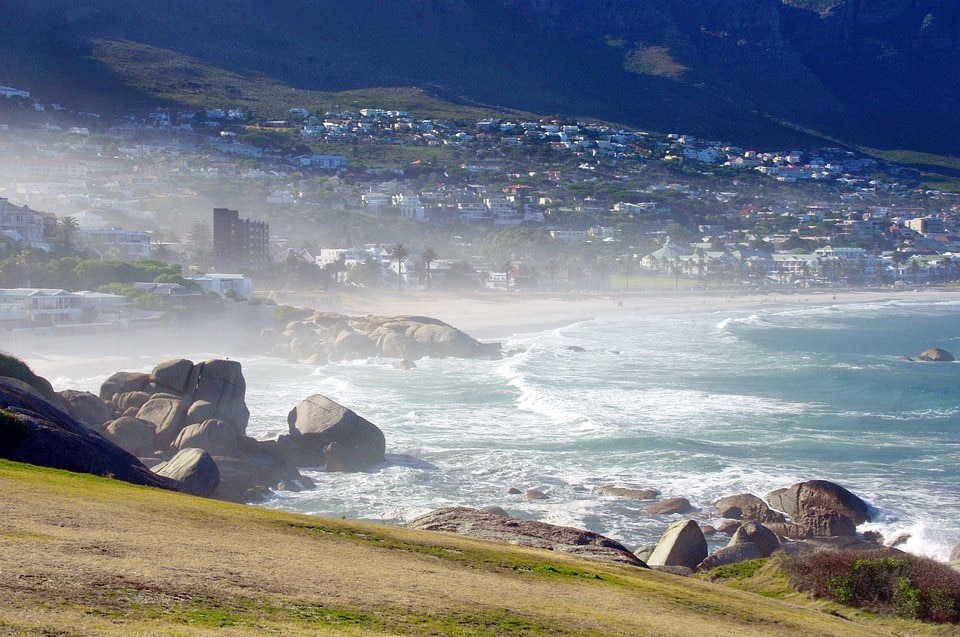 If there is an iconic image of Cape Town to highlight the naturally beautiful beaches in this place, it is that of the Clifton Bay with four pure white granite beaches uniquely divided by falls of granite boulders. Achieving Blue Flag status in 2004, Clifton beaches make the perfect backdrop for jaw-dropping sunsets and high wave surfers as well as people watchers occupy these beaches all day long. Beach no. 4 is one that is most family-friendly with locals as well as tourists visiting it for quality beach time with their families. 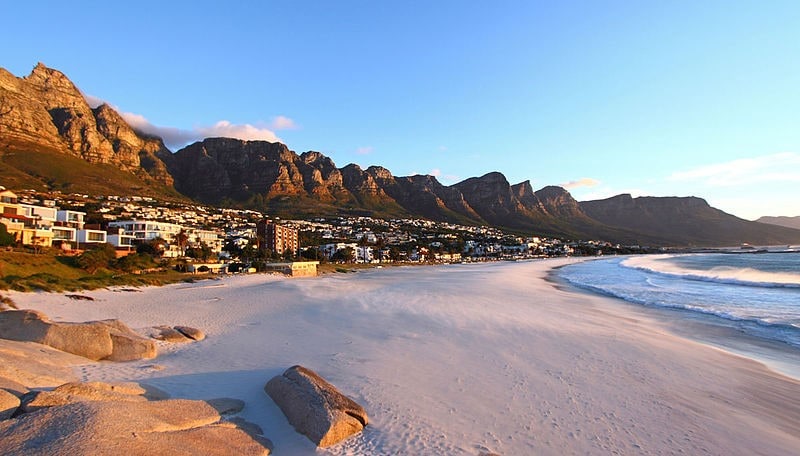 Camps Bay is a small bay located quite near to Clifton on the west coast and is another affluent suburb of Cape Town. It is home to one the best beaches around Cape Town for locals and tourists alike; it offers a spectacular view of the ocean against the pristine backdrop provided by the Twelve Apostles peaks of the Table Mountains that can be seen from the beach.

The beach is a special treat for family outings as it is comparatively peaceful with friendly beach games going on besides being a favourite among active travellers who will be able to dive and see the numerous underwater caves and colourful reefs. 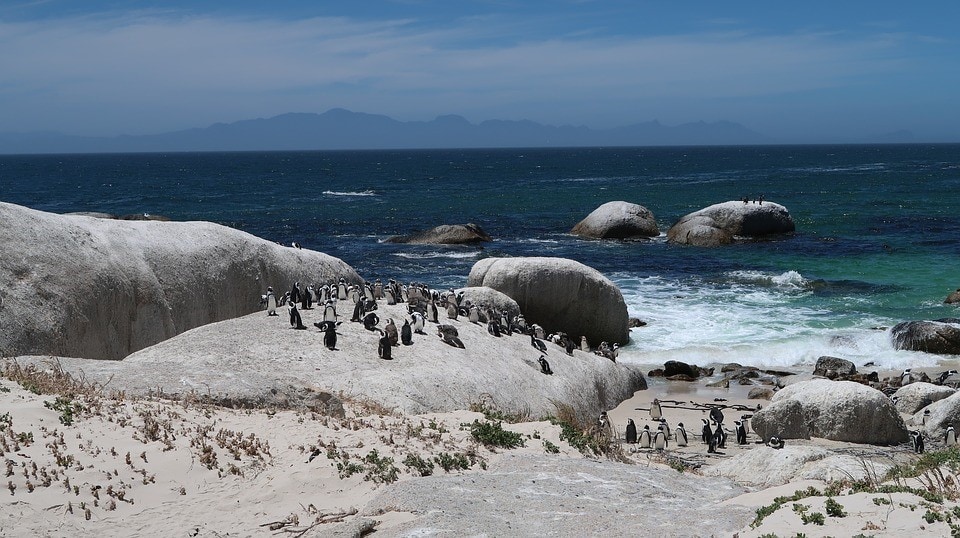 Boulders Beach is one of the most popular beaches in Cape Town, being a personal favourite of every family living Cape Town. Located in Simon’s Town, this beach is famous for the 540 million old granite boulders that have you will be able to see lying around the beach, along with a large colony of the endangered African penguins (found specially on the coast of South Africa and Namibia) that settled in the Boulders Bay area over three decades ago. Boulders Beach, in its natural setting, is a popular tourist attraction as it is a part of the Table Mountains National Park. 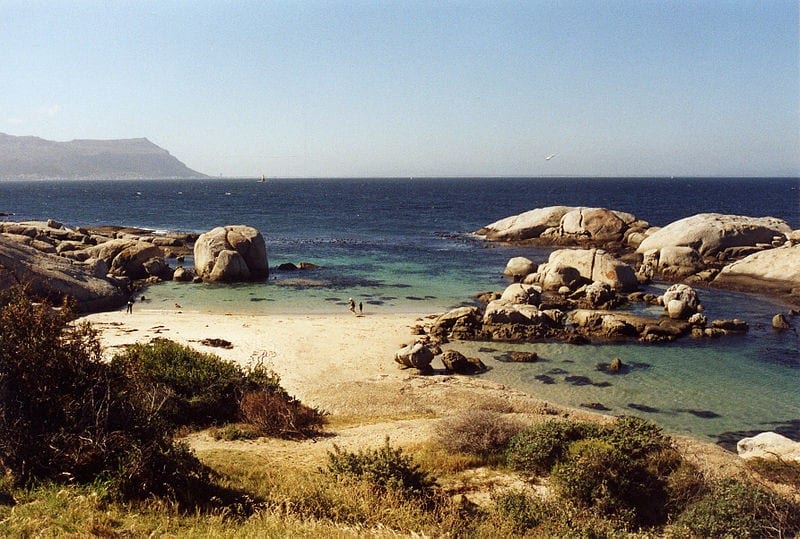 Windmill Beach is very close to Boulders Beach in Simon’s Town and could be settled for the other, whenever the latter is crowded, as your Cape Town beaches map will suggest! The water in this beautiful bay is ideally turquoise as the waves hit and pool around this rocky beach. This is a rather safe beach to swim and do fun beach activities for adults and children alike. Basically, this beach is very similar to Boulders Beach, only that there are no penguins and the fact that this is a much less commercialized place. Active travellers use this beach for surfing and diving to check out the unique and colourful inland reef. 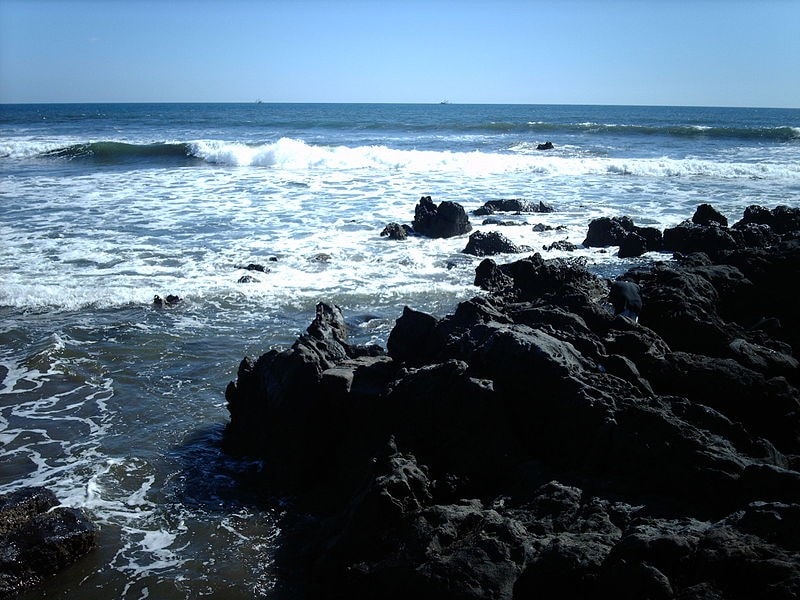 Platboom literally means “flat tree” and is a secluded beach with an amazing landscape view of the ocean, located just 65 kilometres away from the town centre, making it one of the must-see beaches around Cape Town. It is a part of the Cape of Good Hope Nature Reserve, which is why you get to see different and rare breeds of birds and animals around this beach. Among the beach sports played here, the most popular ones are kite surfing and windsurfing. Swimming, on the other hand, is not advisable as the currents are strong around the beach. 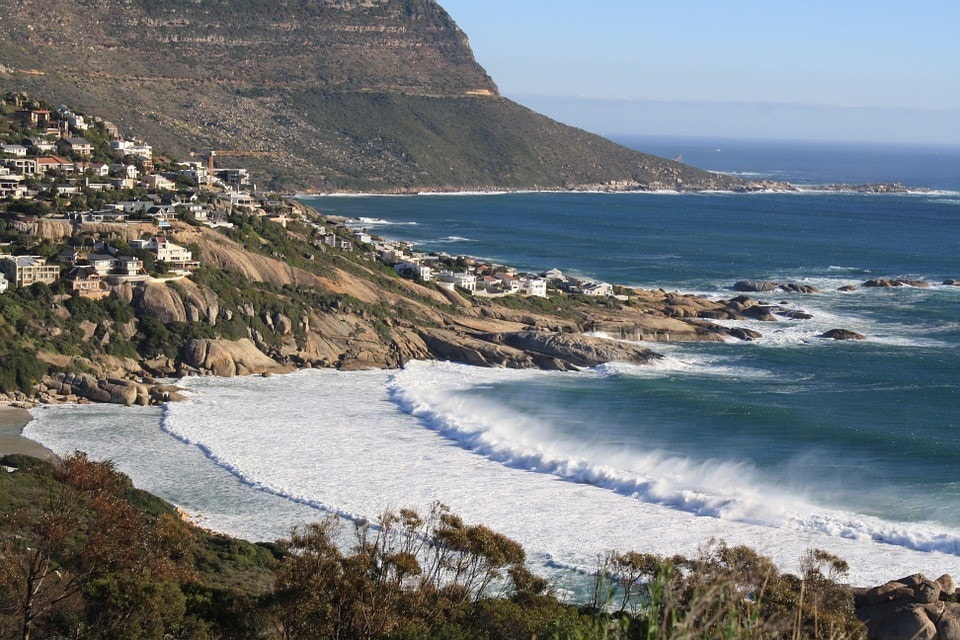 Hawstone Beach is a blue flag beach that is very popular among tourists for the many attractive features you get to see around the area. There are gigantic mountains and snow-white sand and azure waters that make this beach one of the most beautiful beaches to visit in Cape Town. It is not usually crowded which is why you can go here to rest and spend a splendid day under the sun getting tanned and swayed by the wind. 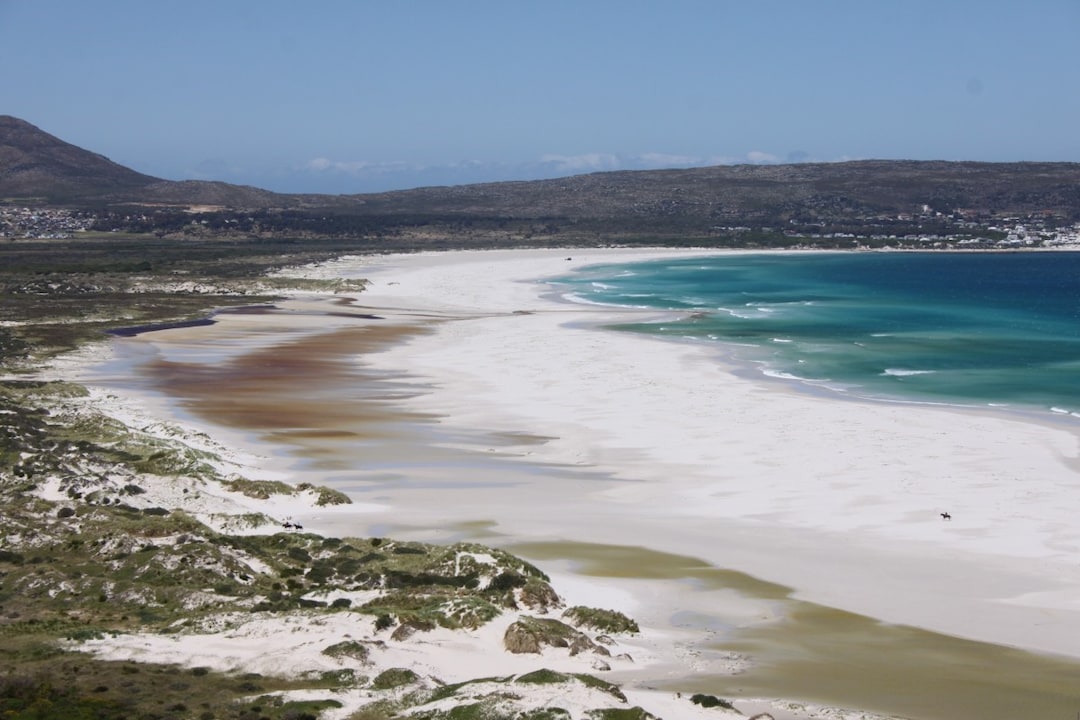 The beach at Scarborough is particularly scenic set against the towering mountains with a full frontal view of the endless Atlantic Ocean. Beach aficionados will find themselves mesmerized as apart from the pristine white sand of the beach they will find their time occupied wonderfully as they explore the unique rock pools around the area. This beach in Cape Town is rarely crowded which makes it perfect for idyllic long walks on the beach and kite flying and playing beach ball. Bikini Beach is a colloquial term used to refer to the beach on the Whale Coast of Gordon’s Bay that is a family-friendly blue flag beach. The name of the beach is speculated to have rolled down locally since this beach is a frequent haunt of the bikini-clad girls from the nearby Stellenbosch University. The warmth and cleanliness of the sands and water, safety, and publicly available facilities make this beach a glamorous choice among Cape Town beaches. St. James Beach is located on the edge of the suburb by the same name, on the False Bay coast between Muizenburg and Kalk Bay. The beach is set against a rocky shore on one side and a steep mountain on the other. St. James Beach is a pretty iconic beach and identifiable too as one of the best beaches in Cape Town with its colourful Victorian-style bathing boxes built on the beach.

When it comes to visiting the exotic beaches of Cape Town, South Africa, it is advisable to choose a wholesome Cape Town tours package that covers highlight exotic as well as popular beaches in and around Cape Town along with other tourist delights the city has to offer. Go answer the call of the beach!