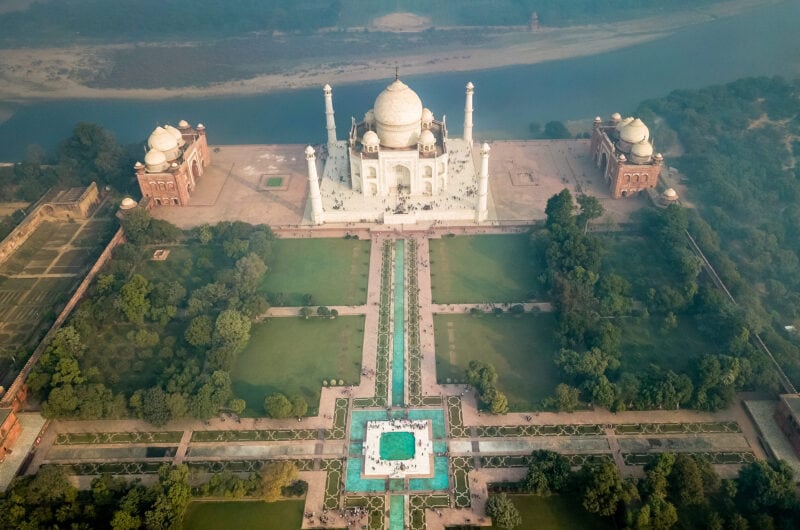 The Taj Mahal, which is the symbol of India, an architectural jewel and the monument to a grand passion, was built in the 17th century by Emperor Shah Jahan, ruler of India’s mighty Mughal Empire. Shah Jahan, whose name literally means ‘king of the world’, gave the world an architectural masterpiece of a kind it had never seen before. It’s also the legend of his beloved queen, Mumtaz Mahal, and of their immortal love. Mumtaz Mahal, which also means ‘the chosen one of the palace’, has her final resting place in this world’s most beautiful building.

Today, this eternal love poem created in stone is one of the world’s greatest tourist attractions and, not to our surprise, finds a place on the list of the 7 Wonders of the Modern World. Of all the places to visit in Agra and India, it’s almost impossible to skip the Taj Mahal for first-time visitors to Agra and India, respectively. But did you know that one of the world’s greatest memorials to love is shrouded in mystery?

With Taj Mahotsav, an annual 10-day festival invoking the memories of the old Mughal era, just around the corner, we bring you 10 unknown facts about the Taj Mahal that will take you by surprise. So here we go… It’s instantly evident when you visit the Taj Mahal that its architects and craftsmen were masters of proportions and tricks of the eye. The first view of the monument is framed by the main gate. As the visitor moves closer, the Taj Mahal seems to get smaller. It seems to grow bigger as you walk away. It’s said that when you leave, you take the Taj with you in your heart. An optical trick went into the building of the minarets too. They lean slightly outwards. If they were truly vertical, they would seem to be leaning inwards. By leaning away from each other, they look perfectly upright, and that brings another advantage. God forbid, in the case of an earthquake, the minarets would collapse outwards, sparing the Taj and its mighty dome.

2. The Crowning Glory of the Taj Mahal – Its Dome:

One of the hidden facts about the Taj Mahal is related to its dome. The dome is the element that makes the Taj Mahal so timeless and graceful. Today we have other options. We can build giant supporting structures in steel for a dome-like structure. We have other materials. They had to solve all their problems with the stone. So they laid the stone on stone and built up the dome in rings. The dome rises layer by layer. The mortar between the stones gives it stability. The result is self-supporting, with no reinforcing struts or columns. The weight of the dome is transferred directly downwards to the massive masonry below. The dome is more than 40 m high and 4 m thick, yet it seems to float over the marble façade – a miracle of stress calculation, still admired by engineers. For over 350 years, this dome has been the ultimate expression of Mughal architecture. 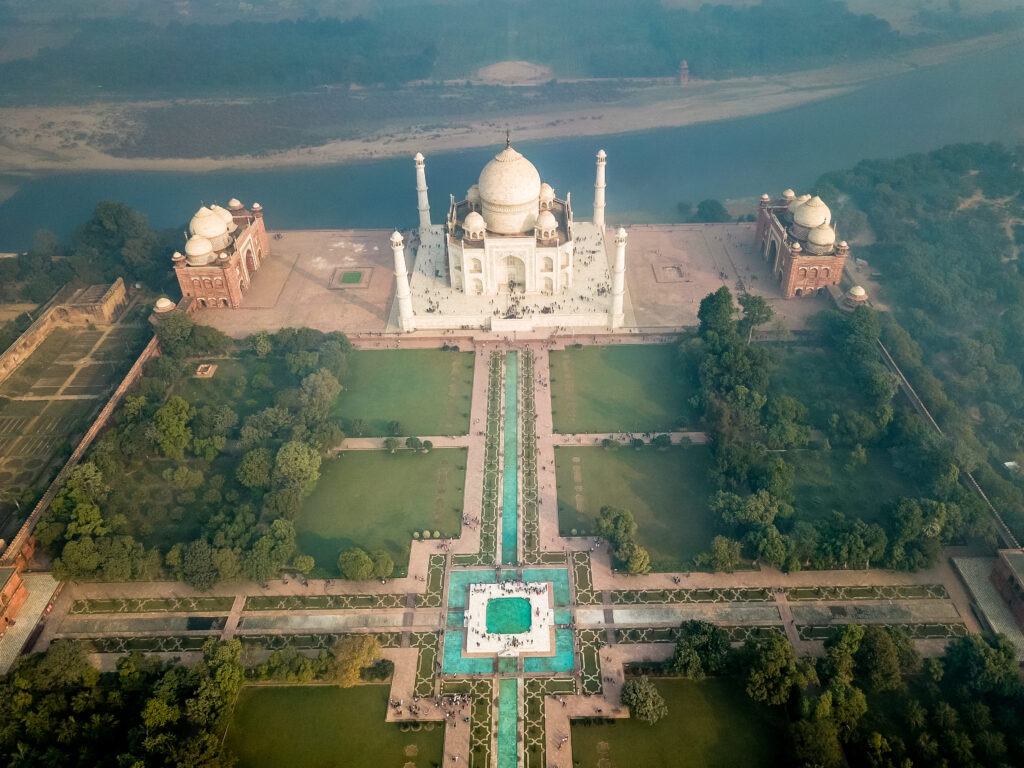 3. A Representation of Paradise:

One of the most fascinating facts about the Taj Mahal is that it is not only a symbol of eternal love, but it is also a representation of paradise as it is associated with the Last Judgement in Islam. The plans for the monument were made compared to the ‘Plain of Assembly’, which is the concept of the place of the Last Judgement. The Assembly Plain is a rectangular area surrounded on the right and left by two rows of angels, and below by three rows that can be seen as the boundaries of the gardens of the Taj Mahal. The throne of God, which is, according to Islam, carried by eight angels, is on the upper part. It is represented by an 8-pointed star that is closer to the octagon of the mausoleum. The central basin of the plain of the Assembly is near the place where the prophet is, who uses the scales to weigh the souls of the dead. The garden of the Taj Mahal consists of two long channels oriented along with the cardinal points. They form a cross. At the centre of the cross, the canals do not join, the centre being occupied by a square basin. The four channels symbolise the four rivers of Paradise as believed in Islam—namely the river of water, that of milk, that of wine, and that of honey. This description is found in sura 47, verse 15 of the Holy Koran. The central basin is a representation of the possibility for the deceased to refresh. 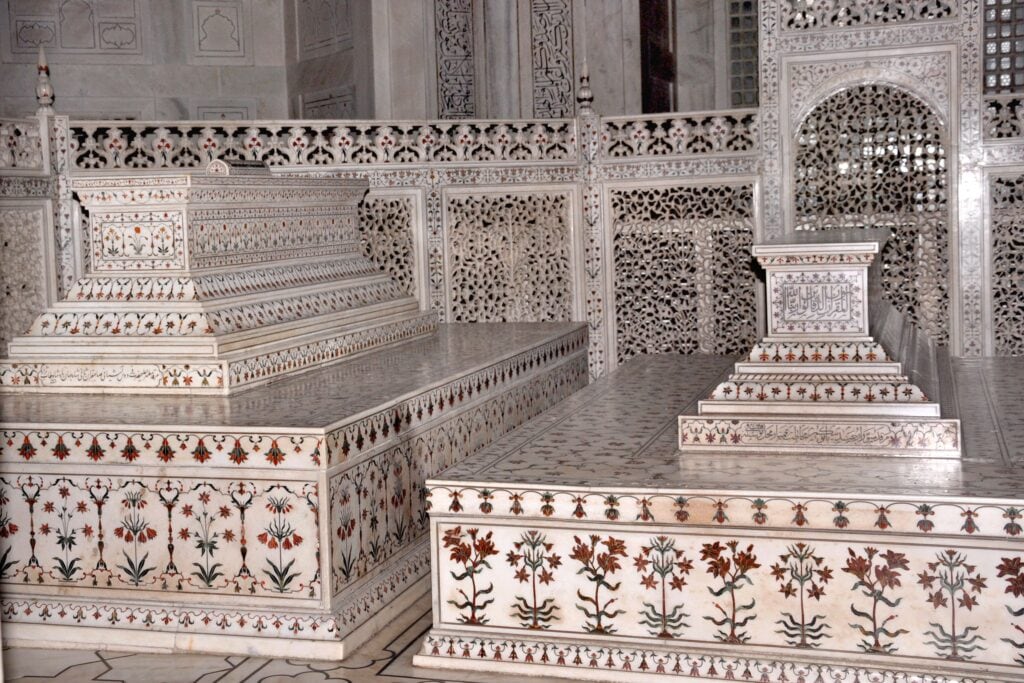 4. Both of the cenotaphs are empty:

At the heart of the Taj Mahal are cenotaphs honouring Mumtaz Mahal and Shah Jahan, enclosed in an eight-sided chamber ornamented with pietra dura (an inlay with semi-precious stones). The cenotaphs are surrounded by an exquisite marble lattice screen and beautiful calligraphic inscriptions in the form of verses from the Holy Koran. marble lattice screen and beautiful calligraphic inscriptions of the Koranic verses that frame the arches of the chamber. However, did you know that these beautiful cenotaphs are empty commemorative mausoleums and that both Mumtaz Mahal and Shah Jahan are buried in unmarked graves in a quiet room below, at garden level, because Islam prohibits the decoration of graves? one of the hidden Taj Mahal facts, quite literally, isn’t it?

The Taj Mahal is built in line with Persian and Islamic architectural principles and is constructed with impeccable symmetry according to the doctrines of the period’s style. One of the amazing facts about the Taj Mahal’s architecture is that it is almost perfectly symmetrical. The minarets, or towers, walls, rooms, and even gardens follow perfect symmetry. Minarets flank the domed tomb, and a central pool reflects the main building. The gardens are divided into quadrants, and twin red sandstone buildings—an east-facing mosque and a west-facing guesthouse give the mausoleum complex a balanced harmony. There is, however, one exception. Shah Jahan’s cenotaph is peculiarly positioned west of the central axis, throwing off the equilibrium. The odd placement has led many to believe he was not meant to be buried there at all.

6. The Taj gets regular facials:

The alarmingly high pollution levels in the northern part of India have taken a toll on the Taj Mahal’s gleaming white marble façade, turning it brownish-yellow under sooty conditions. To counteract this yellowing, occasionally, the monument is given a spa day. Specifically, a mudpack facial called Multani Mitti. This traditional recipe used by Indian women to restore a natural glow on their faces is applied and then washed off with a brush, after which the Taj’s blemishes vanish and its glow returns. Archaeologists believe that this treatment will help restore the natural sheen and colour of the mausoleum. 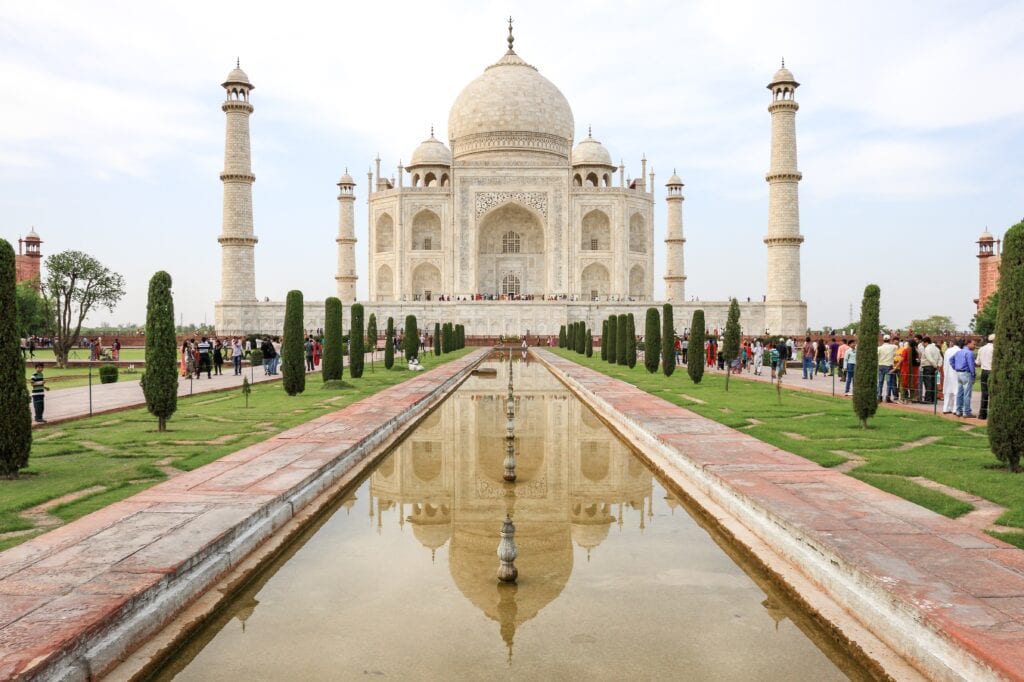 7. The Taj Mahal changes colour throughout the day:

One of the other very interesting facts about the Taj Mahal is that it’s constantly changing hues. From dawn to dusk, the sun transforms the mausoleum. At sunrise, it may appear pearly grey and pale pink, dazzling white at noon, orange-bronze as the sun sets, and a desolate deep blue at night. People have imagined, poetically, that the colour changes reflect the feelings the emperor Shah Jahan underwent during his time with Mumtaz Mahal and after her death. Special tickets are also available for eclipse and full moon night viewings at the Taj Mahal. So on your Agra tour package, make sure you stay at a hotel near the Taj Mahal, preferably the one that overlooks the Taj, so that you can behold its magical changing hues throughout the day. 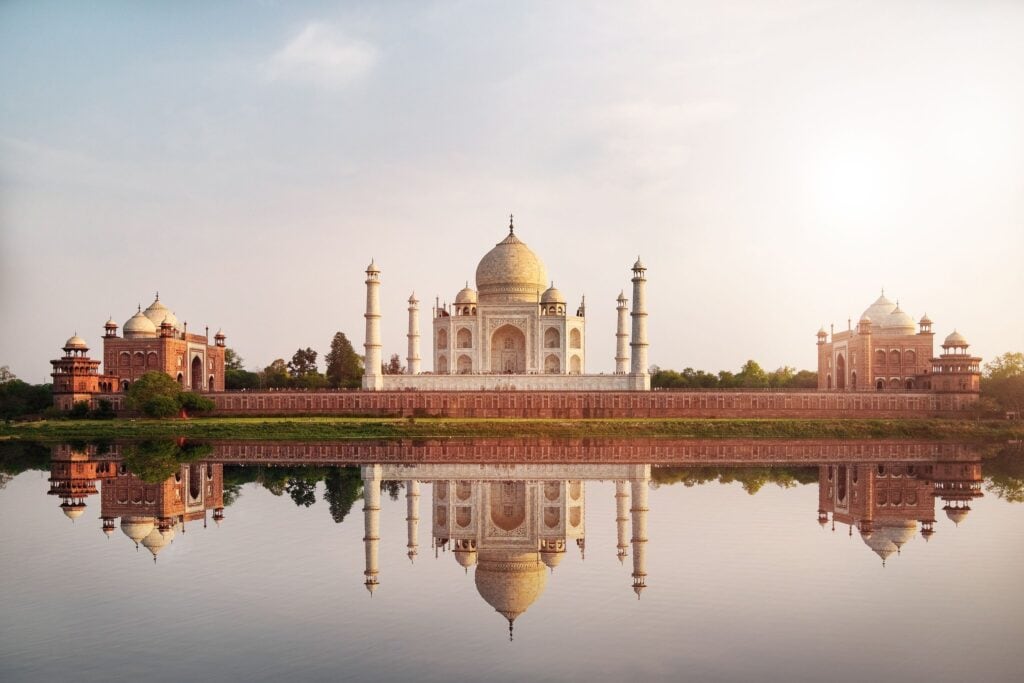 8. Its location on the banks of the Yamuna was a special challenge:

Being located on the banks of a river, you don’t find ground solid enough to build on. Therefore, you have to dig deep until you hit hard, dry earth. They came up with a brilliant solution to this problem, one that is still used today in a slightly different form. They decided to build a well foundation, which was a novel idea at the time. The great Mughal engineers dug deep wells below the water table. Then they fill them up with rocks and mortar. On this base, the master builders erected stone columns linked together with massive arches. The result was a solid mountain of stone to support the foundation slab of the building, protecting the Taj from the currents of the Yamuna River forever. 9. The Taj Mahal demonstrates the links between India and Europe:

One of the important facts about the Taj Mahal is that it demonstrates the links between India and Europe. Sumptuous stone flowers adorn the filigree marble latticework and colour the entire interior of the Taj Mahal. Techniques and motifs come from distant Europe. These mosaics of semi-precious stones are called Pietra-Dura. One doesn’t know whether Pietra-Dura came directly from Europe or whether came via some intermediary zone. Nevertheless, it tickled the imagination of Shah Jahan in a very interesting way, so much so that the building looks like a treasure chest. Pietra-Dura in Italian means ‘Hard Stone’. In the Renaissance, these precious inlays decorated palaces. This art of stone cutting travelled from Italy to India, where it experienced a new heyday. 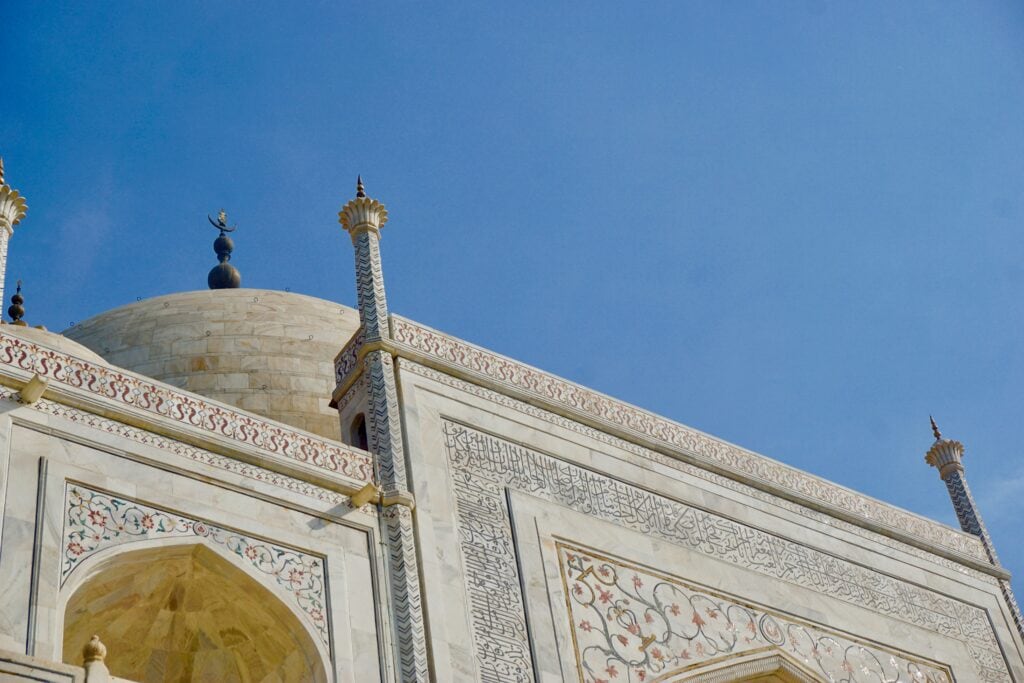 One of the most impressive elements of the decoration of the Taj Mahal is the extensive calligraphy on display. The calligraphy was designed by Amanat Khan and primarily consists of quotations from the Holy Koran. For example, the inscription over the main gate as you approach the tomb reads, “O soul, you are at rest. Return to the Lord in peace with him, and he at peace with you”. What makes the calligraphy so incredible is the fact that, at first glance, it might look like it’s been painted on by hand, but it’s actually a technique of inlaid stone. Amanat Khan designed the lettering and then oversaw artisans who cut the black marble pieces and fitted them perfectly to create the effect. Calligraphy like this was considered incredibly important at that time because it was seen as a way of transcribing the word of God. This explains why Amanat Khan took the very unusual step of signing his work. The phrase ‘Written by the insignificant being, Amanat Khan Shirazi’ appears several times below the inscriptions.

So these were the top 10 interesting facts about the Taj Mahal, many of which you probably haven’t heard of before. Have you come across any other secrets of the Taj Mahal apart from those mentioned here? Do let us know in the comments. Just as all things beautiful in this world hide many secrets within them, so does this ‘teardrop on the cheek of the time’ as wonderfully worded by Gurudev Rabindranath Tagore. These secrets are probably what make the Taj Mahal a timeless and eternal creation by a man on the face of the earth. 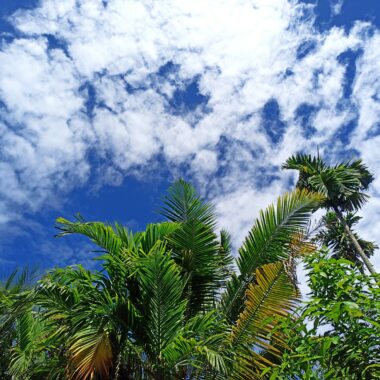 10 Must Visit Places in Ernakulam For A Perfect Vacation