Blog › Mattur in Karnataka: A Sanskrit Speaking Village Of India

Mattur in Karnataka: A Sanskrit Speaking Village Of India

Probably the earliest memory that we have of Sanskrit is when we first heard the chants being recited by a priest at a household puja or at a wedding. However, as kids, we could hardly get what the priest was chanting, leave alone understanding the mantras and stotras. Later in life, probably some of us opted for Sanskrit as an optional language in our higher secondary school. So all this while, little did we know that what seemed to be a mere murmuring or just another subject that would fetch us a good score in our exams is in fact one of the oldest languages in the world still in existence, with a 3500-year history.

Considered to be ‘Deva-Vani’ or the ‘Language of Gods’, Sanskrit has always been closely linked with Hinduism. However, it’s time we cleared up this common misconception… Similar to how we tend to relate Urdu with Islam in India. Language is never ever related to any religion; it is always related to a region. So accordingly, the people of a particular region may create religious literature in a particular language, but that doesn’t mean that particular religion manifests itself only in that language. As the region differs so does the language in which the literature is created – be it religious or secular.

Every year, World Sanskrit Day, also known as Sanskrit Diwas is celebrated on the full moon day of the ‘Shravan’ month in the Hindu calendar. This year we celebrate this day on Monday, the 3rd of August. On this occasion, let’s revisit the language in all its glory. Let’s rediscover it beyond the long difficult words and tongue-twisting pronunciations and get to know about some of its lesser-known yet super-amazing facts.

Sanskrit – The Mother of all Languages

Talking about the origin of Sanskrit, it is said that Brahma was its creator and introduced the language to the Sages of celestial bodies. Considered to be the Mother of all Languages, Sanskrit belongs to the Indic group of the language family of Indo-European and its descendants, which are Indo-Iranian and Indo-Aryan. Known for its clarity and beauty, Sanskrit which as a compound word literally means, refined, decorated, or produced in the perfect form has also been a predominant language of some of the principal texts of Buddhism and Jainism. In the 1st millennium AD, along with Buddhism and Hinduism, Sanskrit migrated to South East Asia, parts of East Asia, and Central Asia.

The history of Sanskrit is quite interesting. The earliest form of Sanskrit language was Vedic Sanskrit that came approximately around 1500-200 B.C. This was the period when knowledge was imparted orally through the generations. Sanskrit literature is the richest literature in the history of mankind. Along with the composition of hymns, poems, and puranas during the Vedic period forming sacred scripts, all our four Vedas – Rigveda, Sama-veda, Yajur-veda and the Atharva-veda are the oldest known texts in Sanskrit. Classical Sanskrit based on the old Vedic speech came up approximately between 500 B.C.-1000 A.D. It was the period after which Panini composed his grammar of Sanskrit. The two great epics Ramayana and Mahabharata are from this very period. Imparted only in the oral forms in its early stages, the writing in Sanskrit was introduced to India, only when it evolved into Prakrit. Sanskrit was then written in various scripts which include – Devanagiri, Brahmi, Kharoshti, Gupta, Bengali, and even Oriya across various parts of India, over different time periods.

The fact would take you by surprise that Sanskrit is related to Greek, Latin as well as many other living and extinct languages with historical significance to Europe, West Asia, Central Asia, and South Asia. Sanskrit is also the root language of many Prakrit languages, which include numerous, modern, North Indian, subcontinental daughter languages such as Hindi, Marathi, Bengali, Punjabi, Gujarati, Sindhi, Kashmiri, Urdu, Maithili, Konkani, Assamese, Nepali, and more. Sanskrit has significantly influenced the grammar, phonology, and vocabulary of the Kannada, Telugu, Tamil and Malayalam languages of South India, which were also the scripts along with Grantha in which Sanskrit was written in the south.

The facts about Sanskrit are as amazing as the language itself. Time to surprise ourselves!

1. The most computer-friendly language

An ancient, yet, a highly technical and systematic language of the world, did you know, Forbes magazine has found Sanskrit to be the most computer-friendly language. Following research, a report given by the NASA scientist, Rick Briggs, Sanskrit is one of the most suitable languages for computers. It is considered to be very efficient in making algorithms.

One of the reasons for the fact that you can say something in the least amount of words in Sanskrit is that Sanskrit has the largest number of synonyms for each word each with a specific meaning. For instance, Sanskrit has some 100 synonyms for ‘Elephant’, over 70 for ‘Water’ and 96 for ‘Love’.

3. A language of the future

Some 17 countries around the world, including the US, have universities that are dedicated completely to Sanskrit and research on the ancient language. In fact, there is a separate department in NASA as well to conduct research on Sanskrit. With all of this, don’t you think, Sanskrit might really be the future language?!

4. The only clear language in the world

According to NASA, Sanskrit is the only unambiguous language in the world. In every other language, the same sentence can be interpreted in many different ways with the context, way you speak and body language being necessary to understand the meaning. Not so in Sanskrit.

5. Much more than a language

Did you know, Sanskrit mantras, when recited in combination with the sound vibration, have a specific effect on the mind and the psyche of the individual. Moreover, Sanskrit has also been proven to help in speech therapy. It enhances memory power and concentration and also helps one learn mathematics and science better. All in all, Sanskrit does improve brain functioning and helps students improve academically.

6. A Newspaper in Sanskrit that still exists

‘Sudharma’ is a Sanskrit newspaper that has been in publication since 1970. It is published out of Mysore, Karnataka, and is even available online now.

7. A British School where Sanskrit is compulsory

It’s very true that today, Sanskrit is studied more in Germany than in India. In Germany, you would literally find people wearing suits and reading shlokas from the Vedas. With 14 universities in Germany offering Sanskrit as a subject, the country is still finding it hard to meet the demand of people wanting to learn Sanskrit.

Who speaks Sanskrit these days… Well, this entire village does!!!

It’s easy to confine Sanskrit to the sacred texts only until you visit this one village in Karnataka. So what a Karnataka tour package would normally include? Probably Bengaluru, Mysore, Coorg, Chikmagalur, Udupi or maybe even the trending Hampi, Gokarna and Murudeshwar… But try and go a little off the beaten track and you would find yourself in Mattur – a tiny village on the banks of river Tunga, located in the Shimoga district, in central Karnataka. Well, the village must be tiny, but what you would experience there would probably be the biggest surprise ever.

It’s in Mattur that you can see and hear villages speaking eloquently in Sanskrit. Mattur, that surprisingly and perfectly blends Vedic times and the 21st century is indeed a slice of ancient India, which retains its charm even today. Imagine entering any home and confronting the questions – ‘Katham asti?’ and ‘Coffee va chaayam kim ichchhathi bhavan?’ Well, don’t let the questions boggle your mind… They would be simply asking you ‘How are you?’ and ‘What will you have, coffee or tea?’ but of course in Sanskrit!

It all began some 40 years ago, in 1981, when Sanskrita Bharati, an organisation that promoted Sanskrit, conducted a 10-day workshop in Mattur, which was attended, among others, by the seer of the Pejawar Mutt in nearby Udupi. Seeing the villagers eagerly take place in the unique experiment to preserve Sanskrit, the seer exclaimed, “A place where individuals speak Sanskrit, where whole houses talk in Sanskrit! What next? A Sanskrit village!” It was a call the residents of Mattur took to heart and this is how Sanskrit became the primary language of the village.

More about Mattur and its people

On visiting Mattur you would find that the entire village is built as a square, with a central temple and a village ‘Pathshala’. The Vedas are chanted at the Pathshala in the traditional way. The students learn them meticulously in their five-year course, under the supervision of village elders. Here, children learn Vedas from the age of 10 at the local school. Over the years, many students from abroad have also stayed and undergone crash courses at the pathshala to learn the language.

Mattur is an agrarian village that primarily cultivates areca nuts and paddy. It is inhabited by the Sankethis, and ancient Brahmin community that had migrated from Kerala and settled down in Mattur about 600 years ago. It’s indeed very interesting to know that everybody in the village, from the vegetable vendor to the priest and from young men flaunting their mobile phone to kids playing cricket on the ground speak Sanskrit fluently. Even you would find the walls of the houses in Mattur adorned with the graffiti in Sanskrit.

Moreover, the schools in Mattur have some of the best academic records in the district. Remember reading how Sanskrit enhances memory power and concentration and how it is the most computer-friendly language, just a little while ago above? Probably that’s the reason why many of Mattur’s young have gone abroad to study engineering or medicine and the village boasts of at least one software engineer in every family!

So the next time you plan a holiday to Karnataka, do make it a point to add Mattur to you Karnataka sightseeing. While time travel seems to be a fantasy, at Mattur, it definitely does become a reality up to a large extent. Your visit to this slice of ancient India will indeed be an experience of a lifetime.

This year as we celebrate World Sanskrit Day, let’s brush-up our Sanskrit, even the little of it that we know. You know what’s the best way to not let a language die out… It’s as simple as speaking it! So the least we can do to keep this invaluable heritage of ours alive is speaking in Sanskrit. Well, we may not be able to do it as the Matturites do, but at least learning a word or two every day and trying to make them a part of our daily conversation with family and friends will definitely go a long way. And you what’s the best part… We would require minimum effort to learn Sanskrit, for we have been knowing and speaking our mother tongue, which it ought to be a daughter of Sanskrit. So let’s Celebrate Sanskrit, Celebrate Life!

A Guide to the Top Weekend Getaways from Kolkata 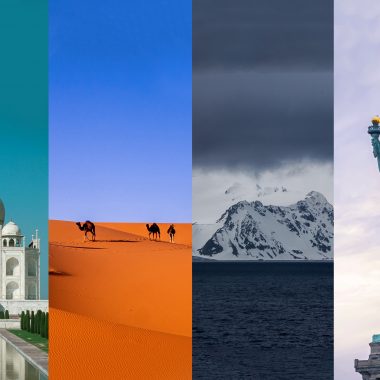 Quiz Time: So You Think You Know All About Travel? Take this Quiz