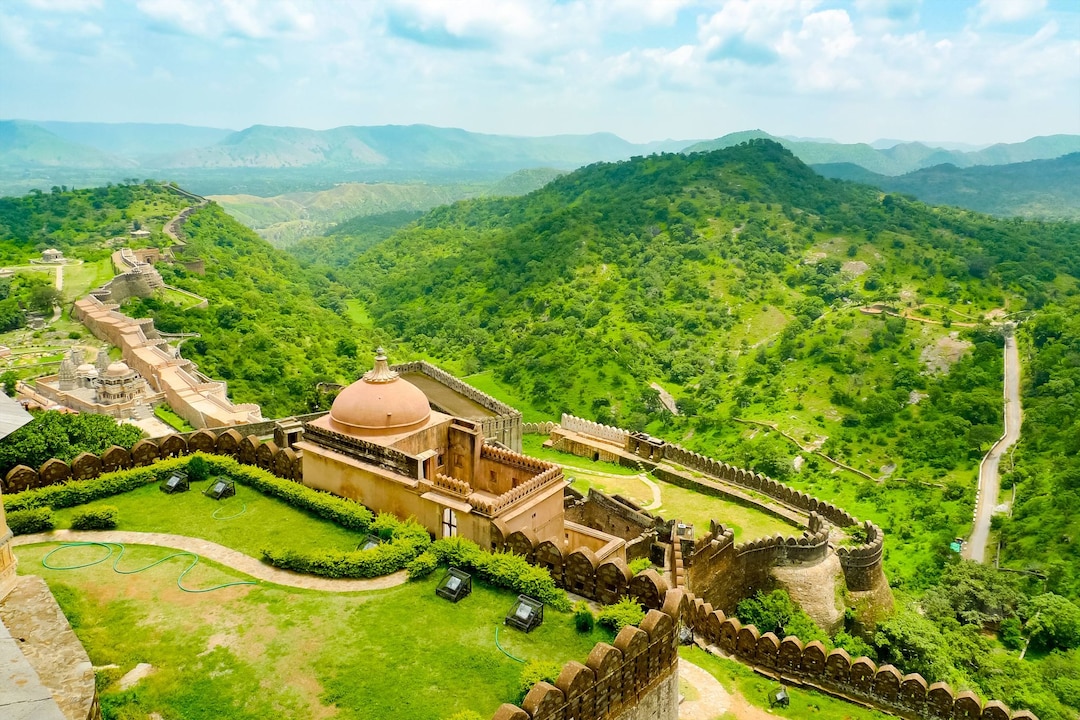 One of the most prominent forts of Rajasthan, Kumbhalgarh Fort is an architectural masterpiece from 15th century India.  The glorious fort is located in the middle of the forest, which has been changed into a wildlife sanctuary. The fort was declared the UNESCO world heritage site in 2013.  Named after king Kumbha, the fort was intelligently constructed on a hilltop to provide a tactical spot to the Mewar kings to protect the kingdom against the attack. Surrounded by the Rajasmand Lake and Kumbalgarh Sanctuary, the fortress perfectly depicts the rich history and culture of the Rajput dynasty.  The citadel, with a height of 1900 meters, provides a spectacular view of the Aravalli hills. One of the best places to visit in Udaipur, the Kumbalgarh Fort is home to many Hindu and Jain temples, along with a giant Shivalinga.

Here is everything you need to know about Kumbhalgarh Fort, including history, architecture, and timings.

Constructed on a hilltop 3,600 ft (1,100 m) above sea level on the Aravalli range, Kumbhalgarh Fort is encircled by a 36-km long wall with fortified gateways. The Kumbhalgarh Fort wall runs through the entire fort, known as the second-longest wall in the world after the Great Wall of China. The main gate of this famous fortress is called Ram Pol or Ram Gate. Also, the Aaret Pol, Hanuman Pol, and Halla Pol are some other gates in the fort. This gigantic 15th-century fort has several fortified gateways for entry and houses many creative structures in its premise, including Hindu and Jain temples. Also, there is a sacred place dedicated to Lord Shiva, displaying a huge Shivalinga. Due to the hilly location, the fort was structured in the Rajput military hill architectural style. It offers a beautiful sight of the dunes in the Thar Desert from the fort. The ramp in the Kumbhalgarh fort leading up to the mountains of the hills has several sharp turns, designed to make it complex for rival armed forces, horses, and elephants to proceed fast. Inside the fort, the Bad Shahi Bavdi is a stepped tank built when Shahbaz Khan attacked India in 1578.

Kumbhalgarh fort was constructed over a period of almost 15 years under the care and supervision of the renowned architect, Mandan. The Mewar rulers would use this place for safety during the invasion by rivals. The Kumbhalgarh Fort, in its present structure, was built by Rana Kumbha, who was the ruler of Mewar from the Sisodia Rajput family. In 1303, the citadel was attacked by Alauddin Khilji. The next incursion was done by Ahmed Shah of Gujarat, but it was failed. Later, Mahmud Khilji attacked the Kumbhalgarh fort at different times and years, including 1458, 1459, and 1467 but he could not be successful in winning the fort. The next attack was done by the combined forces of Raja Uday Singh of Marwar, Emperor Akbar, Mirzas of Gujarat, and Raja Man Singh of Amer. Shahbaz Khan, Akbar’s general, took control of the fort on the orders of Man Singh, but it was reacquired by Pratap in 1585 during Guerilla warfare. In 1818, Marathas captured the Kumbhalgarh fort. The Fort was also taken over by the British rulers but was returned to Udaipur State after independence.

Kumbhalgarh Fort entry fee is INR 10 for Indians and INR 100 for foreigners.

The Kumbhalgarh Fort is open from 9:00 AM to 6:00 PM, all days of the week throughout the year. The best time to visit this striking fort is during winters between October to February when the weather is cool and pleasant.

Attractions inside the Kumbhalgarh Fort

Some major attractions inside the Fort include:

Built during the kingdom of Maharana Kumbha, the Ganesh temple is situated on the way leading to the palaces inside the fort. The earliest of all temples constructed in the fort, the Ganesha temple is a major attraction for Hindu devotees.

Situated near the Pagda Pol, the Kumbha Palace is the best illustration of Rajput architecture. One of the best Kumbhalgarh tourist places, Kumbha Palace is a two-storey construction, along with a gorgeous blue durbar hall. A hallway divides the zanana (women’s) palace from the mardana (men’s) palace inside the building. However, the beautiful wall paintings of camels and crocodiles also give a distinct look to Zenana palace.

A renowned shrine inside the castle derives its name from the bawan or fifty-two shrines in a single complex. Out of fifty-two temples, two are big and situated in the centre. The remaining temples are smaller in size and are built all around the external wall.

Constructed by Rana Fateh Singh in 1885-1930, Badal Mahal is one of the highest points of architect brilliance of Kumbhalgarh Fort. The Mahal is adorned with attractive friezes and wall paintings of 19th-century style. Like the Kumbha palace, this is also a two-storey building -divided into two interrelated distinctive sections – Zanana and the Mardana palace. The stone jali panel in Zanana mahal was intended to help the queens witness the court proceedings and other activities in privacy.

The Vedi temple is a three-storey octagonal Jain temple situated near the Hanuman Pol. Constructed on a high platform, the temple is accessible through a flight of steps. It was built by Rana Kumbha for performing rituals and customary work after the completion of the fort. The temple has thirty-six pillars to support the domical ceiling.

The light and show at the Fort is a key attraction for tourists who want to get more information about the Kumbhalgarh Fort and its rich history. The timing of the show is 6:45 PM to 7:30 PM, every evening. The light and sound show perfectly narrates and displays the history of the Kumbhalgarh fort.

Just like other famous forts in Rajasthan, this magnificent fort is also full of some enthralling tales.  It is said that the initial attempt to build this castle kept failing for long as the wall would fall during the construction.  Then the priest advised the king to seek voluntary human sacrifice to remove the hindrance in construction work. A hermit offered himself for the sacrifice. Later, as per guidance from the priest, the ruler constructed a shrine where the rolling head of the hermit stopped and built the palace where the body fell.

The Kumbhalgarh Fort was home to the prince, Udai Singh II. There is also a tale of how a maid Panna Dai, sacrificed her own son to save prince Udai Singh II – the future king of Mewar. Rajasthan is famous for many such tales and stories of courage and sacrifices.

One of the best destinations in Rajasthan, Kumbhalgarh Fort has many stories from the past to be told and retold. You can choose the best Kumbhalgarh tour package and enjoy a memorable trip to this historical fortress near Udaipur. 10 Best Places to Visit in Kochi (Cochin) with Family