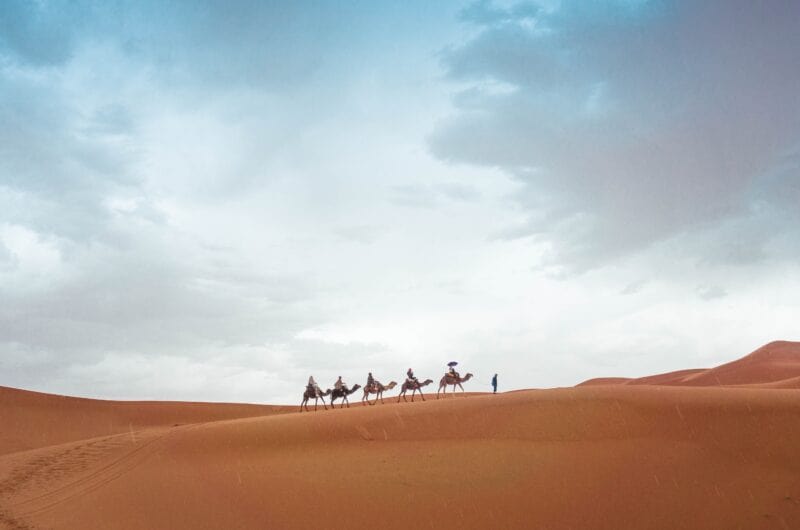 One of the most popular tourist places in Jaisalmer is the Sonar Kella (Sonar Killa). The sandstone walls of the imposing structure tend to shine bright yellow under the radiance of the morning sun and turn into an enchanting shade of honey-gold, earning the Jaisalmer Fort the name – Sone ka Quila (the fort of gold).

Exploring the Thar Desert, indulging in the rich heritage and culture of the local people, or spending a night under the stars, surrounded by vast expanses of sand in one of the desert camps in Jaisalmer, the city, without a doubt, has a lot to offer to the tourists. But it is the Jaisalmer ka Kila, the second oldest fort in the state and one of the largest in the world, which steals the spotlight when you visit the Golden City of Rajasthan. 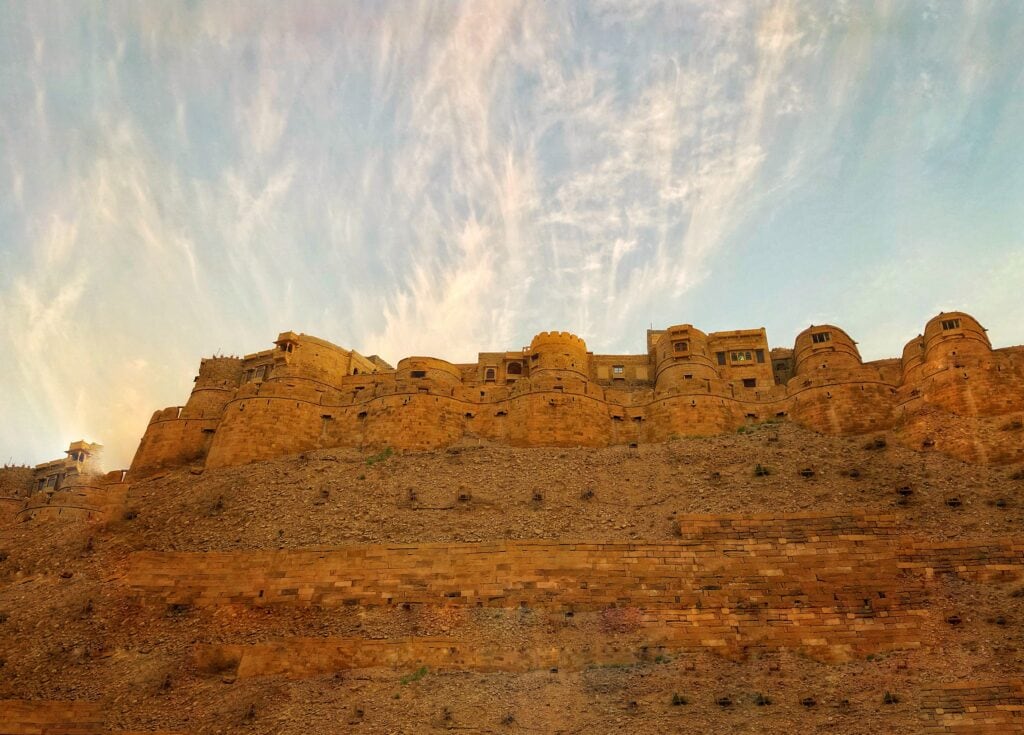 The Golden Fort of Jaisalmer is a UNESCO World Heritage Site that is known not only in India but all over the world. Standing atop the Trikuta Mountains of the Thar Desert, the fortress has stood witness to many historical battles and the evolving culture of the city under the different dynasties that ruled over it. Jaisalmer ka Kila forms a vital part of the glorious Rajputana past of Jaisalmer and is still as significant, being one of the very few living forts of Rajasthan that remain till day.

30-feet high fortifications surround the magnificent structure as multiple entrance gates take you within, where almost 3000 people still reside. The Jaisalmer Fort is no longer an important trade centre or military post, but a small town in itself with homes, eateries, shops, and even hotels.

The nomadic ambience created by Jaisalmer’s desert safaris and the unending blankets of golden sand amalgamates with the opulent vestiges of royalty to create a unique experience for visitors to bask in.

Some Interesting Facts about Jaisalmer Fort

Reaching out majestically towards the skies stands the Jaisalmer Fort with a history that is long and rich, full of mystique and wonder.

A very noticeable characteristic of the Golden Fort of Jaisalmer is the blend of Muslim and Rajput architectural styles, which is quite prominently showcased. However, it is not the combination of styles, but how they came to be, that makes for an interesting read.

The history of Jaisalmer Fort stretches as far back as 1156. Jaisalmer Fort was built by Rawal Jaisal, who also founded the city of Jaisalmer. In the beginning, the fort was no more than a mud fort on top of a hill until almost a century later, Rawal Jethsi added bastions to the fort to strengthen its defence. Regardless, the fort fell to Allaudin Khilji in 1294-95, who laid siege to the fort and caused quite a lot of damage.

Through its long history, the Golden Fort of Jaisalmer underwent major expansions as well as repairs, which were done by Rajput and Muslim artisans, and carries the stories of a number of rulers, dynasties, and times. The colourful backstory of the fort has today resulted in a subtle and fascinating mix of architectural styles that does not fail to impress.

To understand this legend that surrounds the fort, you have to go back to the king of Jaisalmer’s past. Rawal Jaisal, whose name is where Jaisalmer Fort and Jaisalmer got their identity, was the eldest son of the ruler of Deoraj. But when the time came, he was passed over as the successor to the throne in favour of his half-brother. Not only this, but he was also exiled from his kingdom, and eventually found his way to Trikuta Hill. It is said that this was where Rawal Jaisal met Eesul, the sage who lived there.

In conversation, Eesul discovered that the man in front of him had a prominent lineage that could be traced to the Yaduvanshis, the Rajput clan with claims to have descended from the ancient Yadus. The Yadus in turn find mention in the Rig Veda and are said to be the descendants of Lord Krishna himself.

That is when Eesul showed him a spring that had been created by Lord Krishna and a rock, which was where Krishna had prophesied that a Yaduvanshi descendant will create a new kingdom at the very spot. This prophecy, whether belief, truth, or fancy, was one of the reasons that led to Jaisal finally building his fort on Trikuta Hill. Even today, Jaisalmer ka Kila has the legendary rock within its walls.

Not just an imposing structure with a rich history, Jaisalmer Fort has three layers of walls surrounding it that add to its majesty. At first, a lower layer was constructed using solid stone blocks to add strength to the fort’s foundation and to steady the loose soil of the hill. Then there is the middle wall that encircles the entire fort and acted as the first barrier of defence. The final barrier is the third wall, which back in the day was used by the kingdom’s soldiers, who would throw boiling oil and water and huge boulders onto the invading soldiers that made it across the third wall but were stopped by the middle one.

When King Jethsi reinforced the defences of the fort, he constructed 56 bastions to surround the fort. In the subsequent centuries, even more bastions were added to the fortifications. According to recorded facts, Jaisalmer Fort had 92 bastions constructed between 1633 and 1647, and today, it has a total of 99 bastions.

The famous attack on Chittorgarh Fort by Allaudin Khilji is not just well-known but has also been immortalised by the Sufi poet Malik Muhammad Jayasi in his poem, Padmavat. What is not that widely known however is that before Chittor, Allaudin Khilji laid siege to the Jaisalmer Fort, which lasted for 8-9 years, ending with the kingdom’s male warriors meeting a fatal end and the women committing Jauhar (self-immolation) in 1295 to escape a horrible fate at the hands of the invaders, when the fall of the fort’s forces seemed imminent. After this incident, Allaudin Khilji held the fort for 8 years.

A melancholic tale from Jaisalmer Fort, named the Half-Jauhar of Jaisalmer Fort, shows how unkind fate can be at times. It was under the reign of Rawal Lunkarna (1530-51), when a local Afghan clan’s chief, Amir Ali, attacked the fort. Amir Ali’s warriors infiltrated the fort under the guise of accompanying the chief’s wives on a visit to the queens of Jaisalmer. Rawal Lunkarna lost his soldiers in the battle that ensued, and he began thinking that they were fighting a losing battle. There was no time to build funeral pyres, so he decided to kill the women in the palace with his own hands to spare them the horror of capture.

But fate was not done, even after coercing Rawal Lunkarna to get through this gruesome task, as soon afterwards, reinforcements arrived at Jaisalmer Fort and helped Rawal Lunkarna win the battle.

The incident went down in the history of Jaisalmer Fort for the tragic twist of fate that it was.

The Bengali writer and filmmaker, Satyajit Ray wrote a mystery novel, “Sonar Kella”, where Jaisalmer Fort is quite an important plot point and after which the story is also named. The story revolves around Ray’s famous sleuth, Feluda, and a man who is plagued by visions and memories of his previous life where he used to live in a fortress made of gold that housed a lot of gems and treasures. The novel was also adapted into a movie, “The Golden Fortress”, which was released in the United States and was the first film adaptation of Ray’s Feluda.

When you’re at Jaisalmer Fort… 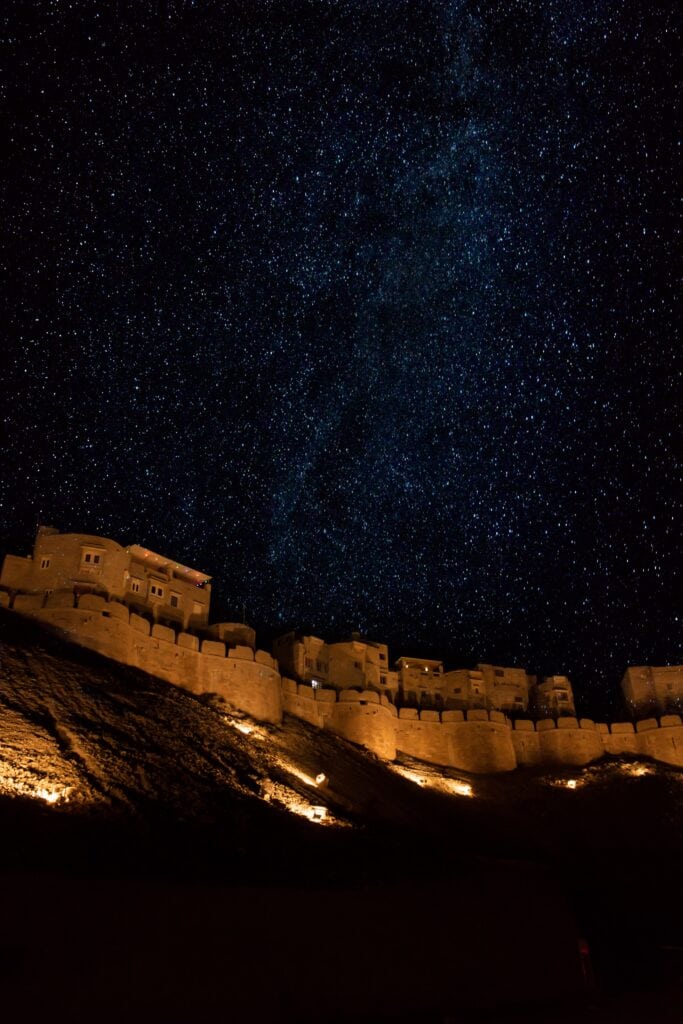 You can visit the Laxminath and Jain temples or climb the hill for mesmerising views of the city, explore the alleys of the town or lay back and just gaze at the sky as it changes with the day, or try out the delicious local dishes. Whenever a Jaisalmer tour package takes you to the Golden Fort, make sure you put aside enough time, so you can take in all the fort has to offer. Here’s some important information about Jaisalmer Fort that can help you plan the perfect visit:

Trust us, Jaisalmer knows how to entrance in its palpable glory. When are you planning to experience this spectacle of a destination?! 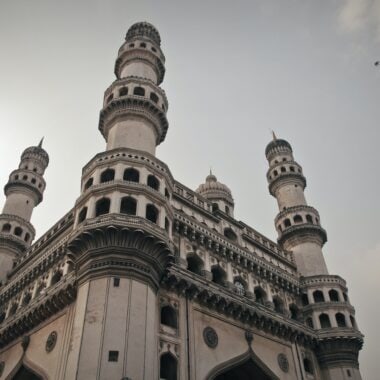 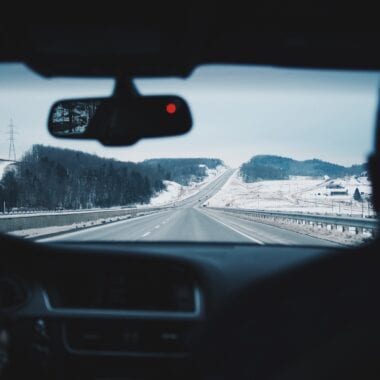 7 Winter Road Trips in India that you must go for