11 Must Visit Ancient Temples in Rishikesh

Situated in the Himalayan foothills, on the banks of the River Ganga, Rishikesh is one of the most prominent heritage cities in Uttarakhand in India.  Also known as the ‘Yoga Capital of India’, Rishikesh attracts both spiritual souls and adventure enthusiasts. Surrounded by mountains, majestic waterfalls, and the River Ganga running speedily through town, Rishikesh is a paradise for nature lovers. Be it adventurous activities like river rafting, kayaking, rock climbing, and hiking; attending yoga and meditation classes; or witnessing the glorious Ganga Aarti; there are plenty of attractions to engage in and several places to visit in Rishikesh for visitors. Also, the city is home to many shrines, yoga ashrams, resorts, and meditations centres.

Mentioned below are some of the most highly revered ancient temples in Rishikesh reflecting the holy vibes and essence of this beautiful city: –

Bhootnath Temple is another temple in Rishikesh that is dedicated to Lord Shiva. Located on the top of the hill, the temple provides a beautiful panoramic view of the city. This famous Shiv Mandir in Rishikesh also has an interesting history. It is said that Lord Shiva rested here when he was going to marry his first wife Sati. The temple has several floors where the main holy place is a small shrine on the top floor. Here, the deity appears as Shivling that is bordered by ten bells from four sides. Just like Neelkanth in Rishikesh, Bhootnath Temple is also very popular among Lord Shiva devotees.

Dedicated to Goddess Sati, Kunjapuri Temple is another religious place to be explored in Rishikesh. Nestled on the Kunjapuri Hill, this temple is one of the fifty-one Shakti Peeths. Every year, thousands of devotees come to get Goddess’s blessings, especially during ‘Navratras’ (April and October). Shakti Peeths are different places where body parts of Goddess Sati dropped when Lord Shiva was carrying her burned and deceased body in his arms and wandering around unconsciously on the Himalaya. This famous temple in Rishikesh is known for offering gorgeous sights of the snow-ranges of the Himalayas.

Situated near Lakshman Jhula, Trayambakeshwar temple is one of the most prominent holy shrines among Lord Shiva devotees. This famous Shiva temple in Rishikesh is a 13-storied building with many deities inside. However, it is mainly famous for Lord Shiva as the name Trayambakeshwar refers to the ‘The Abode Of Three-Eyed’. Also popular as the Tera Manzil Temple, the temple attracts people with its intricate designs and brilliant architecture. Quite significantly, the Trayambakeshwar Temple in Rishikesh is one of the twelve Jyotirlingas of Lord Shiva.

Situated around 0.3 km from the Ganges River, Madhuban Ashram is one of the best places to stay in Rishikesh during your trip to this holy city. Devoted to Lord Krishna, the Ashram is known as the Iskcon Temple in Rishikesh.

ISKCON Temple is all about the beliefs of Sanatan Dharma, the world’s most ancient religion which has no beginning and no end. It is the best place for those who seek serenity and peace while getting indulged in the devotion of Lord Krishna. Surrounded by luscious greenery and pleasant environment, the Madhuban Ashram has spacious and well-maintained rooms spread across three floors.

Situated on the banks of river Ganga, Lakshman Temple is one of the most ancient temples in Rishikesh. This temple is dedicated to Lord Lakshman, the younger brother of Lord Ram. With ancient sculptures and striking paintings on the walls portraying some eminent scenes from history, the temple attracts several tourists from across the world. It is believed that Lord Lakshman meditated at this place to attain spiritual enlightenment. Lakshman Temple in Rishikesh is a place that you should not miss during your trip to this beautiful city.

Known as the oldest temple in Rishikesh, Bharat Mandir is situated near Triveni Ghat in the middle of Rishikesh city. Built in the 12-century by Adi guru Shankaracharya, the Bharat Mandir is dedicated to Lord Vishnu whose idol present here is carved out of a single piece of Saligram. This famous mandir in Rishikesh is an ideal blend of traditional architecture and aesthetical values which is reflected in its beautiful interiors and architecture.

Dedicated to Lord Rama and Goddess Sita, Raghunath Temple is one of the most significant places for pious ceremonies in Rishikesh. Situated near Triveni Ghat, the temple has a small water pond (Kund), known as Rishikund. It is said that Lord Ram used this kund to take a bath while he was on his exile. This beautiful temple in Rishikesh was damaged during an earthquake in 1893 and was later rebuilt by the local king.

Shatrughna Temple is an ancient temple that attracts Hindu devotees from across the country. Situated near Ram Jhula in Rishikesh, this historical temple is dedicated to Shatrughna, the youngest brother of Lord Ram. It happens to be one of the most beautiful temples in Rishikesh, attracting visitors with its serenity and peaceful vibes. Here, you can worship inside the temple and practice yoga and meditation in the premises of the Shatrughna Temple.

Dedicated to Lord Hanuman, this Rishikesh Mandir should be next during your trip to this holy city. This significant temple draws a massive crowd of devotees on every Tuesday and the auspicious occasion of Hanuman Jayanti every year. The famous Ganga Aarti happening at this place is a highlight of this temple.

Located in Swarg Ashram on the banks of river Ganga, Parmarth Niketan is a famous temple in Rishikesh. You will feel sacred energies and peaceful vibes all around as soon as you step foot in here. Parmarth Niketan also has a religious school that teaches principles of Hinduism. The temple is famous worldwide for its yoga and meditation classes and for organizing Ganga Aarti and Hawan at sunset every day. Here, the mesmerizing views of the mother Ganga, and the divine energy of the temple will rejuvenate your entire being.

Temples in Rishikesh offer a supremely delightful experience. So, the next time you are looking for a Rishikesh tour package, make sure you get to visit these magnificent temples. Bask in the sacredness and spiritual power of this Dev Bhoomi. 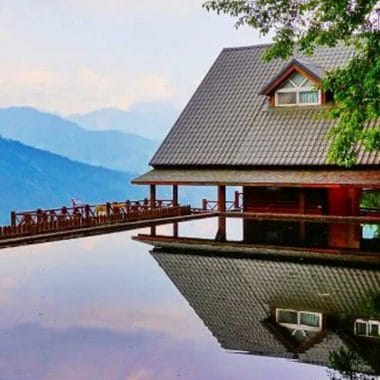 10 Offbeat Hotels Around The World That Will Leave You Awestruck