Kanyakumari, a coastal town located in Tamil Nadu, is the southernmost point of the country where the Bay of Bengal, Arabian Sea, and the Indian Ocean meet. At specific times during a year, you can see the moon rise and the sunset over the three seas simultaneously. Housing several important tourist places, Kanyakumari is a surreal town that offers a refreshing respite to travellers. Apart from serene views of nature, the town also holds spiritual significance. Moreover, right from the ancient times, the town has been a significant centre of culture, art, and religion.

Previously known as Cape Comorin, Kanyakumari’s tourist places include many historic buildings, temples, churches, and pristine beaches. Bordered by sparkling seashores, lined with coconut trees and paddy fields, and surrounded by mountains, Kanyakumari knows how to charm its visitors. It is the only place in the country where you can catch the sunset and the sunrise from the same beach. Providing the perfect setup to unwind, one can always plan to check out the best places to visit in Kanyakumari and get enamoured by its captivating beauty. Kanyakumari has something for everyone and if you too are planning to visit the town soon, here are some of the best places in Kanyakumari that you can add to your itinerary: – In the year 1892, revered Hindu philosopher and Indian poet Swami Vivekananda visited Kanyakumari when his trip across the country was approaching an end. He spent a total of three days meditating on a massive offshore rock. A memorial was constructed on the same rock in the year 1970 in honour of Swami Vivekananda and was named as the Vivekanand Rock Memorial. It consists of a pavilion with Swami Vivekananda’s bronze statue, a hall that sheds light on his life, and an area for meditation. It is one of the best places to see in Kanyakumari and therefore, a visit to this place must form a part of your Kanyakumari trip. The Padmanabhapuram Palace offers you a sneak peek into the conventional Keralan architecture in its finest form. Credited as being one of most exciting places to visit in Kanyakumari, it surprises you with its humble facade. However, you can’t help but admire the architecture and craftsmanship of the palace, particularly the intriguing woodwork on the ceilings and walls. One of the best places in Kanyakumari, the palace complex houses a museum as well and spans more than 6 acres inside a fort. 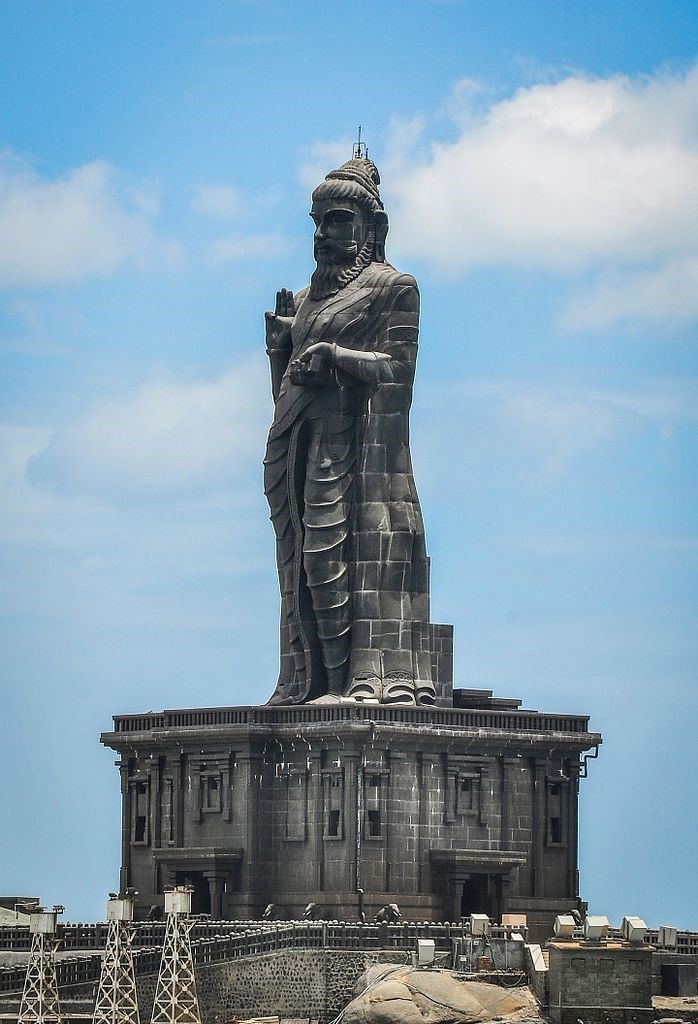 Just off the coast of Kanyakumari, an imposing statue of Thiruvalluvar, the great Tamil poet and philosopher, stands on a rock. It is one of the most famous tourist spots of Kanyakumari where ferries halt en route to Vivekananda Rock Memorial if the tide allows. One can go inside the base of the statue and climb the stairs that lead up to the feet to witness a splendid sight. The work on the statue was finished in 1999, twenty years after its foundation stone was laid.

This is one of the best tourist places in Kanyakumari to catch a mesmerising sunrise along the side of the statue, making for one of the most breathtaking views you will get to see in your lifetime. 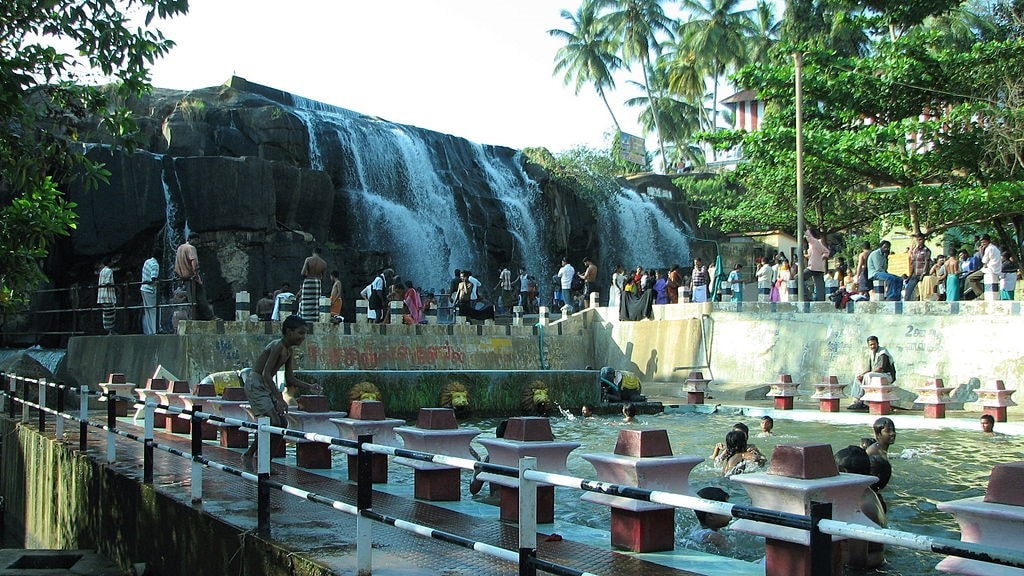 Situated about 55 kilometres away from Kanyakumari, the cascading waters of Thirparappu Falls offer a delightful sight to visitors. Falling from a height of 50 feet, the manmade waterfalls collect in a pool. Wrapped around by indigenous fauna and green foliage, the falls are definitely one of the most charming tourist places near Kanyakumari. Here, a one-of-its-kind combination of steams flows together to make one spectacular waterfall!

The Thirparappu Falls are a magnet for nature lovers, a perfect place to spend some quality time with your family and friends while being surrounded by the beauty of nature. Located in Suchindram, the Thanumalay Temple bears inscriptions that go all the way back to the 9th century. Being one of the best places to visit in Kanyakumari, the marvellous temple showcases amazing architectural magnificence. When you reach the alankara mandapam area, you will be spellbound as you see 4 musical pillars that have been carved out from one stone. The temple is among the Shiva Temples that are revered by the Kerala Hindus; it holds importance for both the Vaishnavite and Shaivite sects of Hinduism. 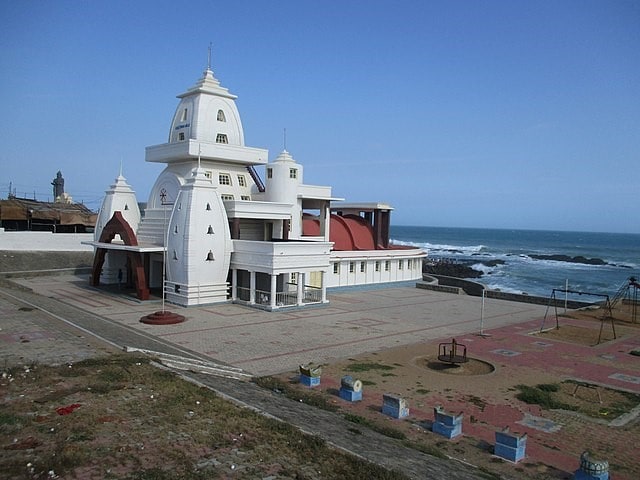 Kanyakumari Beach is one of the best tourist spots of Kanyakumari. Attracting travellers from around the world, the beach is famous for its breathtaking sunrise and sunset. The reason why this beach forms an important part of Kanyakumari sightseeing is that one gets to gaze at the three different shades of the Indian Ocean, the Arabian Sea, and the Bay of Bengal from the beach. Bathing in the confluence of the three water bodies is truly an enriching experience for tourists. This phenomenon makes it one of the best places to see in Kanyakumari that affords some peaceful time.

There is a host of activities that one can do at the beach along with plenty of options to shop. Numerous handicrafts crafted from rustic seaside materials and many other things are available for purchase here. There is a lighthouse as well at the beach that offers the most spectacular views of the salty water going up till the horizon. 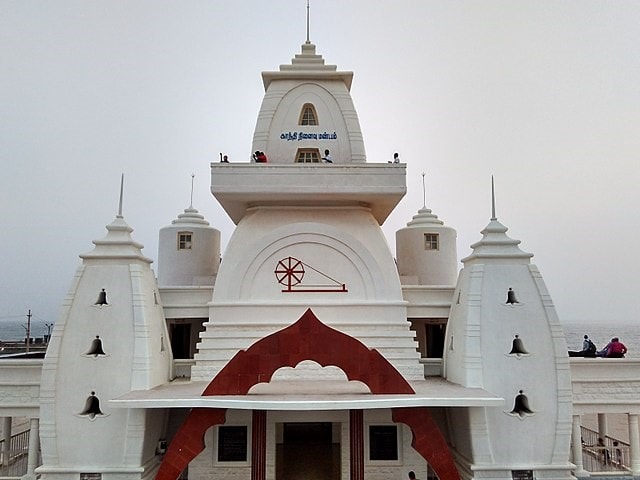 One of the top tourist places of Kanyakumari, the Gandhi Mandapam is a huge memorial dedicated to Mahatma Gandhi, the father of the nation. The memorial has been constructed at the exact spot where the urn of his ashes was laid to rest so that the public could pay homage. After the death of this eminent personality, his ashes were split up into 12 separate urns and spread across India and the coastal town of Kanyakumari was one of them. It is one of the best places to see in Kanyakumari and must be included in your tour itinerary of Kanyakumari. 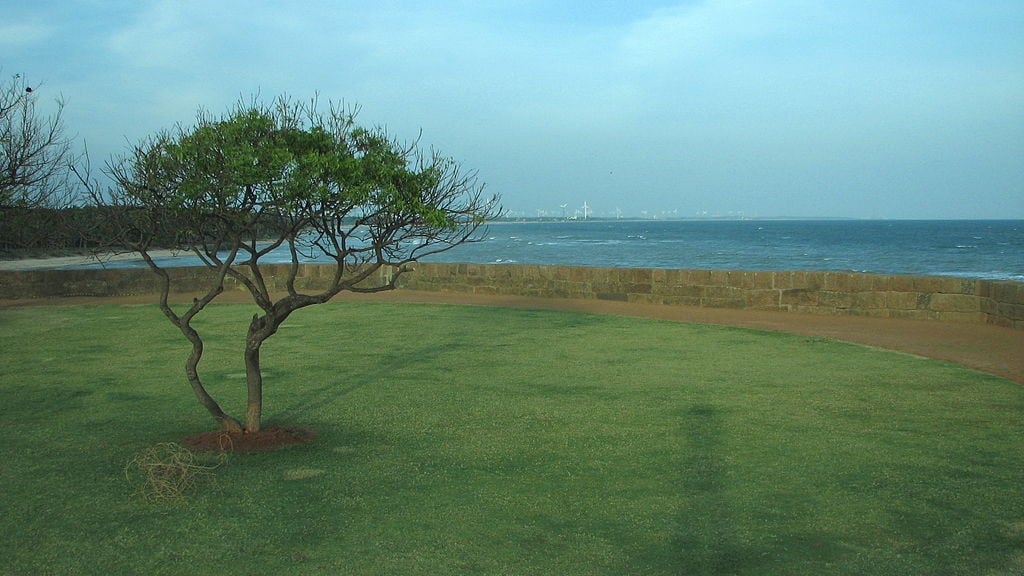 The Vattakottai Fort is one of the best tourist places near Kanyakumari. Perched on the coast of the Bay of Bengal, this fort adds to Tamil Nadu’s beauty. Both the architecture and the aesthetics of the fort are popular among tourists. Tourists also visit the fort to capture a marvellous view of the Bay of Bengal and the mesmerising hills of the Western Ghats on different sides. The scenic setting of the fort makes for a fascinating visit.

9. Our Lady of Ransom Church Our Lady of Ransom Church is one of the most famous places in Kanyakumari. It is a gorgeous white-coloured structure of gothic style that looks spectacular amidst blue skies. This church looks even more breathtaking when its lights are turned on during the night. This place forms a part of the list of the best places to visit in Kanyakumari for many travellers and can always be visited on your trip to this quaint town. 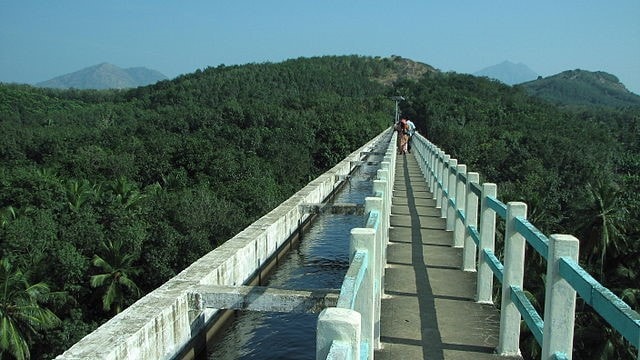 Mathur Aqueduct is an engineering marvel constructed across the Pahrali River. Built as a measure for drought relief, it is a place that you will come to admire on your Kanyakumari trip. Its purpose is to take water from one hill to another hill. As you walk across the extremely thin aqueduct, you will be able to feel the adrenaline kick in. So, do make a pit stop here while exploring the town and don’t forget to try some pineapple when you are here. Set in the Tamil Nadu’s Tirunelveli district, the Courtallam Falls are one of the most exciting places to visit in Kanyakumari for a laid-back time. The ferocious and gigantic falls are a sight to behold indeed! With its green surroundings, the falls provide the perfect spot to kick back and catch up. There are many food stalls in the proximity as well. It is one of the most famous places of Kanyakumari for photography enthusiasts as well.

Kanyakumari has many tourist places that beguile travellers. It is blessed with stunning temples, tranquil beaches, and historical monuments that make for an altogether fulfilling trip. The popular tourist spots of Kanyakumari offer quite a varied experience. Whether it is diving deep into history, taking a stroll by the beach, or gawking at some mesmerising views of nature, there’s a lot to do in Kanyakumari.

One of the best ways to see the town at its best is by opting for one of the Kanyakumari tour packages. This is because they come with pre-planned itineraries and you get the chance to concentrate on the fun part of the trip instead of the planning. The best tourist places in Kanyakumari add to the relaxing vacation you are going to have here.