Holding its own the top European tourist places, Greece is a country that’s well-known for its sunny beaches, ancient ruins, delicious cuisine, whitewashed villages, and of course, the warm and friendly atmosphere. Tourists and travellers can find a unique sense of beauty on the many scattered islands that dot the sea, like tiny gems glittering around the Grecian peninsula. The main reason behind the popularity of Greece amongst the tourist places in Europe is just how beautiful it is. Each island that surrounds the peninsula has its own take on historic sites, stunning landscapes, nightlife, and cultural experiences to offer to visitors.

If you have been planning a getaway to Greece, and are eyeing the best places to visit when there, there is a wealth of options to explore. From the Ionian Islands like Kefalonia and Corfu towards the west to the Aegean Sea playing host to Mykonos, Santorini, Kos, and Rhodes, there are so many places to see in Greece.

From experiencing the pre-Hellenic Minoan culture of Crete to enjoying a landscape worthy of the Greek gods; the monastery at Meteora, the ruins of Delphi; and of course, who can forget the most famous Athens and the Parthenon. Here’s a small list to help you in your quest to find the best places to visit in Greece: Located at the southernmost tip of Attica, Cape Sounion is known to be the site where you can find ruins of Poseidon’s (god of the sea) ancient Greek temple. The remains of the temple are perched on the headland and are surrounded by the sea on three sides. The site of the temple is quite a popular place to see in Greece and is great for a daytime excursion from Athens. Experiencing the sunset over the Aegean Sea right from the ruins of the temple is a spectacle that is bound to leave you mesmerised! 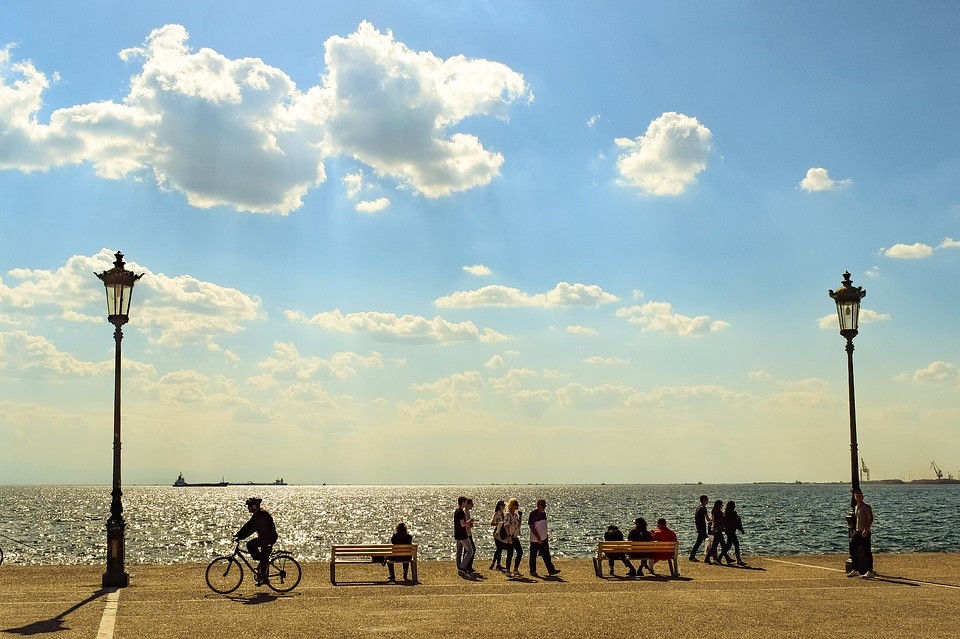 Next on the list of the top tourist places in Greece is Thessaloniki, which is the second largest city in the country. Thessaloniki is also the capital city of the Macedonian region of Northern Greece. Some people even refer to this city as being the cultural capital of Greece as it offers both old and new attractions to visitors, ranging from its Byzantine walls, Turkish baths, White Tower, colourful markets, art galleries, and museums. Other major aspects that make Thessaloniki one of the best places to visit in Greece are its social events, lively festivals, and bustling nightlife which span small tavernas, nightclubs, and other entertainment options. While looking for places to visit in Greece, you cannot miss out on Zagori, a region that is abundant in natural beauty. Located in the north western region of Greece, the place has some striking geology and is home to two national parks as well. The rugged mountains and dense forests of Zagori have powerful rivers flowing through them as the scene is completed by traditional villages that dot the landscape. Many of these villages feature grand stone houses that date as far back as the late eighteenth century. The best way to explore this quaint area is to hike along the numerous paths that connect these villages. Quite close to the city of Thessaloniki is a trident-like peninsula called Halkidiki. This area makes it to the list of the most interesting places to visit in Greece as each and every ‘prong’ of the Halkidiki trident forms a separate peninsula. To summarise these three peninsulas, one may say – Athos is home to the monks, Sithonia is the one with the beaches, and Kassandra for the nightlife. As Kassandra is the closest to Thessaloniki, it is the most built up ‘prong’ while Sithonia is home to campgrounds, clear waters, and even some hidden coves. On the other hand, much of the eastern peninsula belongs to the Mount Athos monastic community, is accessible by boat, and is open only to male pilgrims.

“Do you know why the prominent attractions of Greece are painted in blue & white?” 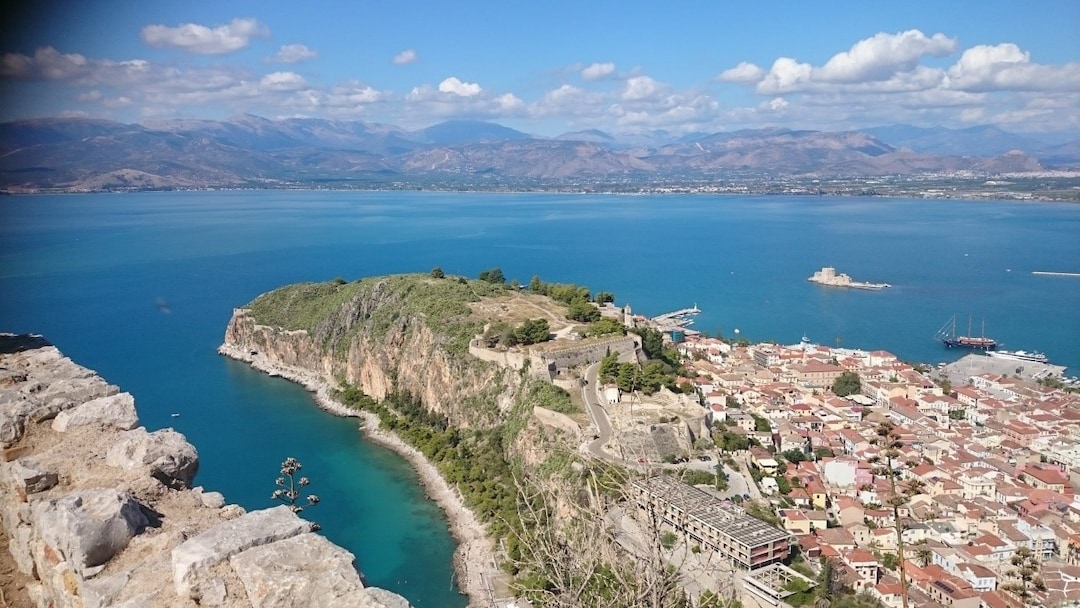 Traditionally known as Morea (meaning a mulberry leaf), Peloponnese is located in the southernmost region of Greece. Peloponnese has a leaf-shaped outline and is a wide peninsula that is connected to the mainland via the Rio-Antirrio bridge. Another one of the best places to visit in Greece, Peloponnese showcases its ancient culture in its classic Greek temples, Mycenaean palaces, Byzantine churches, and Venetian fortresses. Also included in these places is Olympia; it is said that the first Olympic Games were held here to honour Zeus, the god of the skies. 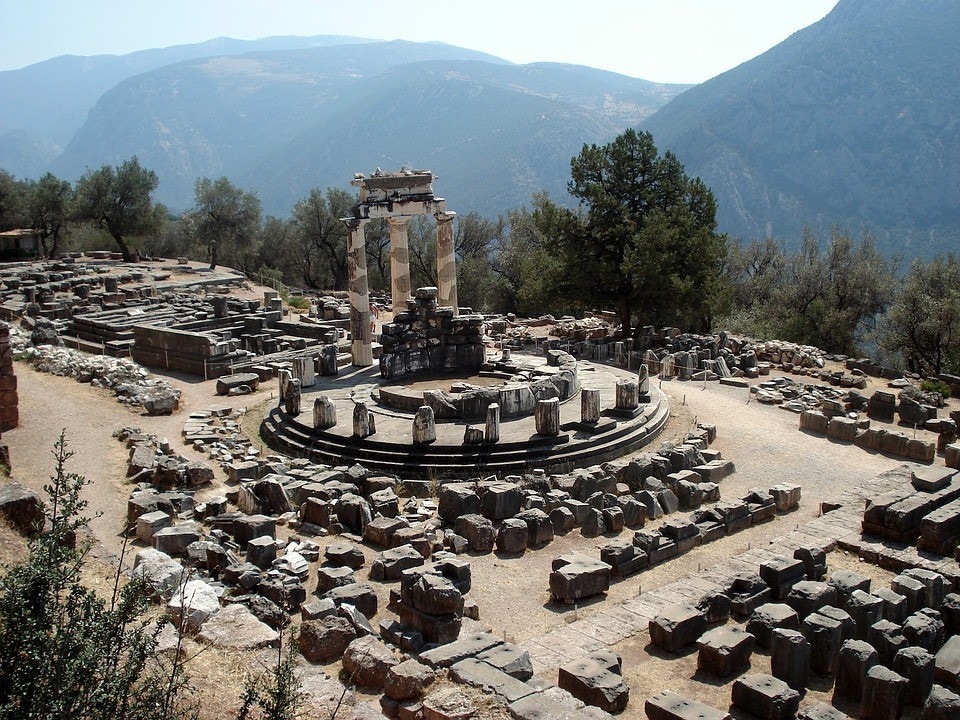 This is possibly the most popular archaeological site and place to visit in Greece, right after the Acropolis in Athens. Delphi is located about 2½ hours away from Athens and falls along the slopes of Mount Parnassus. Among all the places in Greece, the ancient Greeks used to revere Delphi as the centre of the earth. Delphi was also an important oracle, dedicated to the god, Apollo. People used to visit this sacred spot to consult the priestess for advice on a number of things that ranged from farming to politics and relationships. Some of the places that you can visit here include the temple of Apollo, the Athenian Treasury, and the theatre and hippodrome that had once hosted the ancient Pythian Games. In Greek, the word Meteora stands for being “suspended in air”. This phrase can aptly be used to describe one of the best places in Greece – these spectacular cliffs that rise for more than 366 metres, or 1200 feet into the air. These cliffs overlook the villages of Kastraki and Kalambaka in the north-central mainland. Another fact that makes these cliffs count among the most popular places to go to in Greece is that it is home to a number of historic monasteries that perch along the summits. These monasteries at Meteora were built back in the 14th and 16th centuries by monks who were seeking spiritual isolation and freedom from religious persecution at the time. 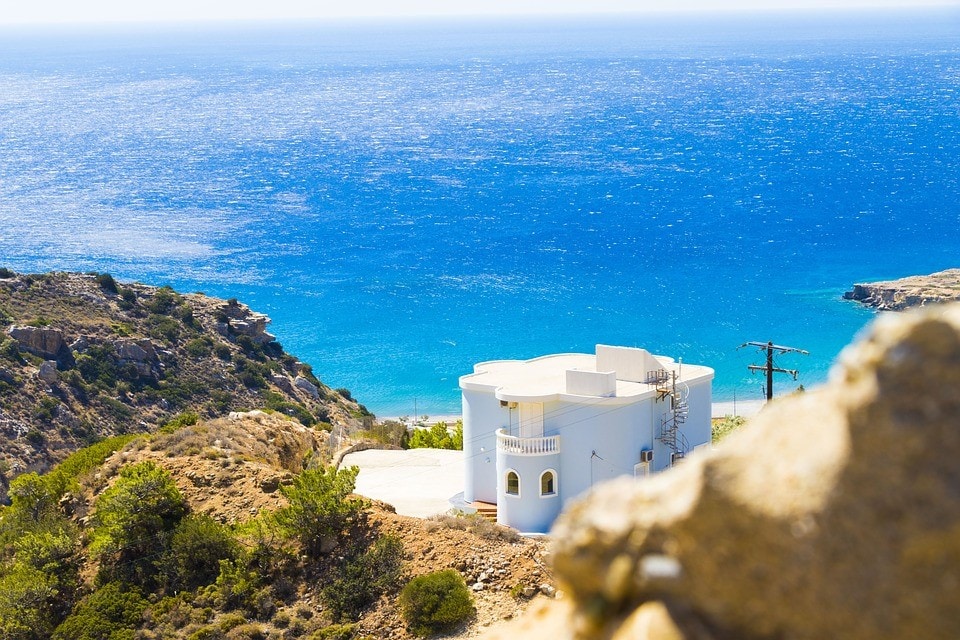 Crete is the largest among the Greek islands and among the most amazing places to go to in Greece. It is a land that offers you some very pleasing contrasts. It is home to landscapes that range all the way from rugged mountains to stunning coastlines and a rolling countryside with olive trees. Owing to that, Crete is among the places in Greece that are steeped in history and bear archaeological traces of the numerous civilizations that had inhabited the area in the past. 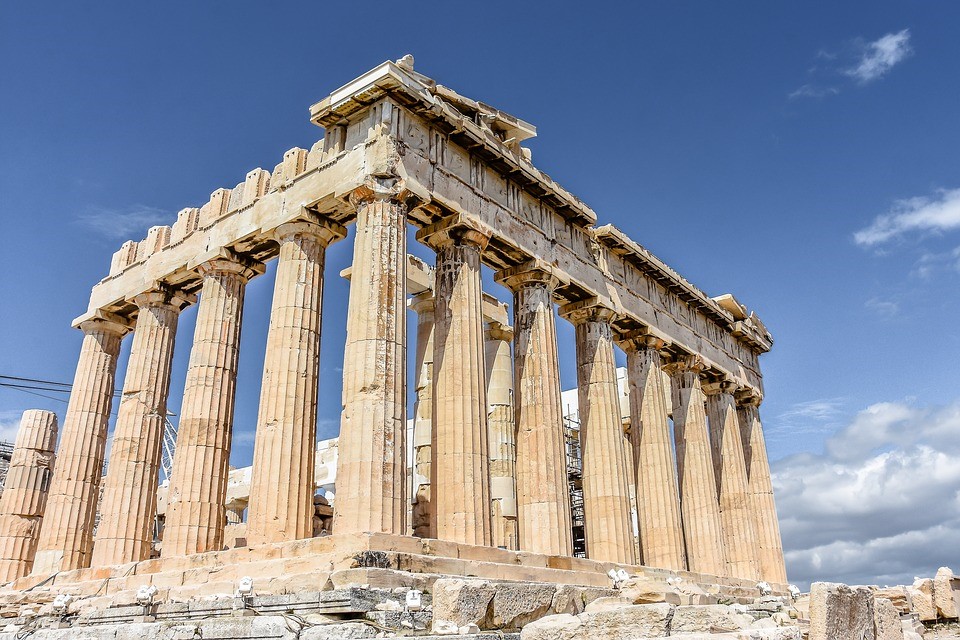 Athens is one of the most popular places in Greece. It has been inhabited for more than 3000 years and is also known as the birthplace of democracy as well as the cradle of Western civilization. The city has a perfect blend of modern and historical features and is most famous for the archaeological ruins and monuments that it houses. Some of the most famous monuments in Athens include the Theatre of Dionysus, the Ancient Agora, the Acropolis, and the Parthenon. However, the ancient ruins are not the only things that make Athens one of the important places in Greece, as it is also an important centre of business, nightlife, and culture. Among all the places in Greece, it is the beautiful and exotic Greek Islands that lure tons of tourists each year, so much so that they are considered to be the most popular place to visit in Greece, and one of the top tourist destinations in the world. From even more ancient ruins and gorgeous beaches to active volcanoes and colourful harbours, the Greek Islands have a lot to offer. There are more than 2000 islands that you can choose from to visit.

This European destination has a wealth of travel experiences on offer, some so mesmerising that they almost feel surreal. Find it hard to believe? Travel to Greece; you’ll change your mind. Book Greece vacation packages today!