Blog › The Ultimate Diwali Quiz: Let’s see how well you know about the festival The Ultimate Diwali Quiz: Let’s see how well you know about the festival

Earthen lamps and homes filled with the aroma of delightful sweets, the warmth of families & friends, and the chill of the upcoming winter season, that’s how we celebrate Diwali. The ‘festival of lights’ is the biggest festival in India, commemorating the victory of good over evil. There is nothing more culturally exuberating than the celebration of an auspicious festival like Diwali, or as some people call it Deepavali. It presents with itself a time of the year where every individual reminisces of family, friends, home, togetherness, and many other aspects that this religious and socially auspicious festival brings together. It is much more than a celebration of folklore, it is childhood memories, it being back with family after a long-time and it is the fireworks that light up the sky.

To some, Diwali celebrations are loud and colourful, with people vying for who has the loudest and brightest firework! For some, Diwali means the annual cleaning and decorating of the house. And for some, it means the last bit of sweets, the end of an array of Hindu celebrations for the year.

Diwali is an official holiday in India, Nepal, Sri Lanka, Myanmar, Mauritius, Guyana, Trinidad & Tobago, Suriname, Malaysia, Singapore, and Fiji.. Billions of people worldwide celebrate Diwali, a multi-day festival that marks the beginning of the Hindu New Year and much more—but many still do not know much about the holiday. Are you one of them? Take this Diwali quiz to find out and while you’re at it, why not check out some interesting Diwali tour packages for this season.

1. The name Diwali is derived from the Sanskrit term Deepavali. What is its English translation? 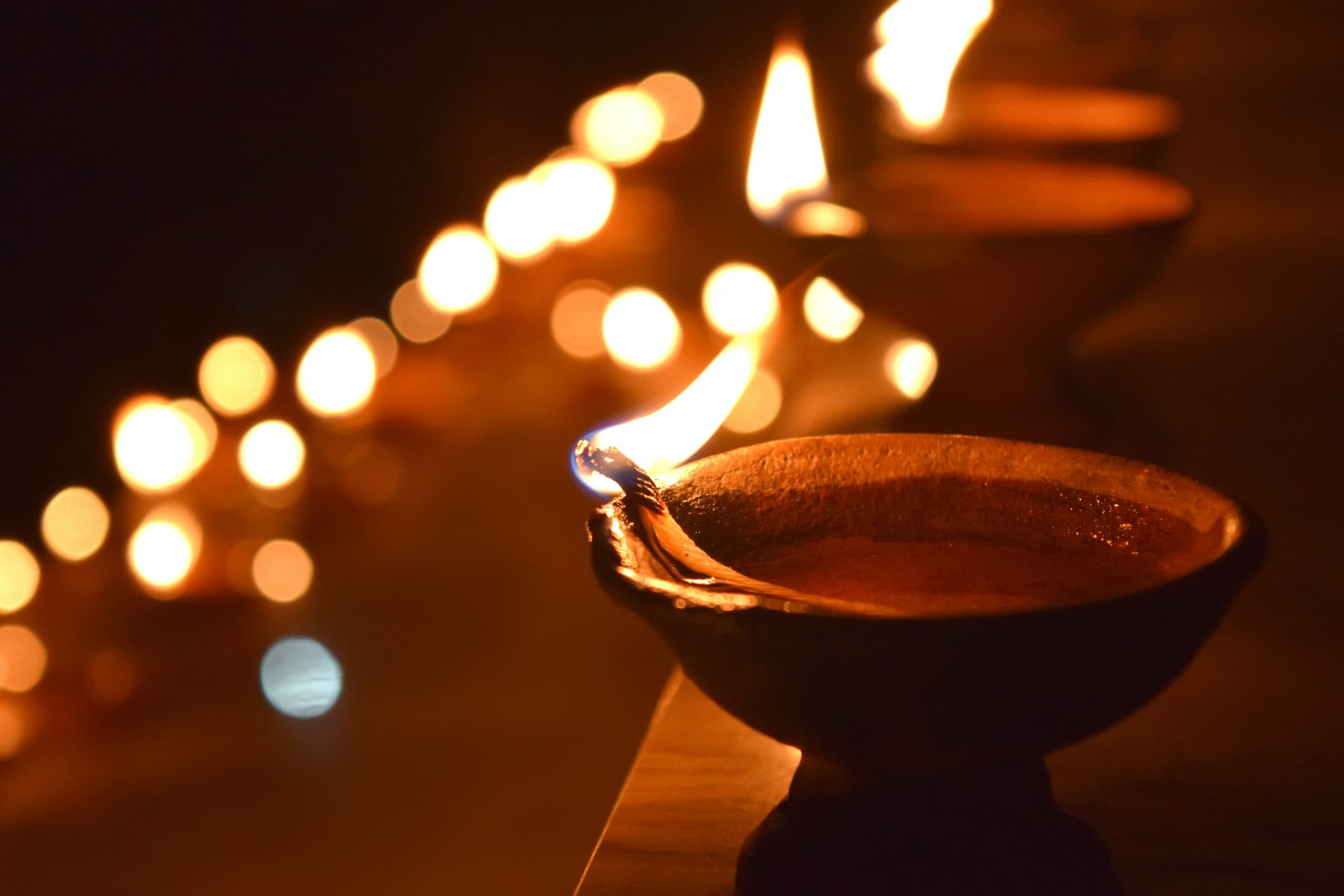 The word Diwali has originated from Deepavali, which in turn is formed as deep (lamp) + avali (row). Diwali is a row of lamps.

2. Which is the first day of Diwali, dedicated to cleaning homes and purchasing small items of gold? 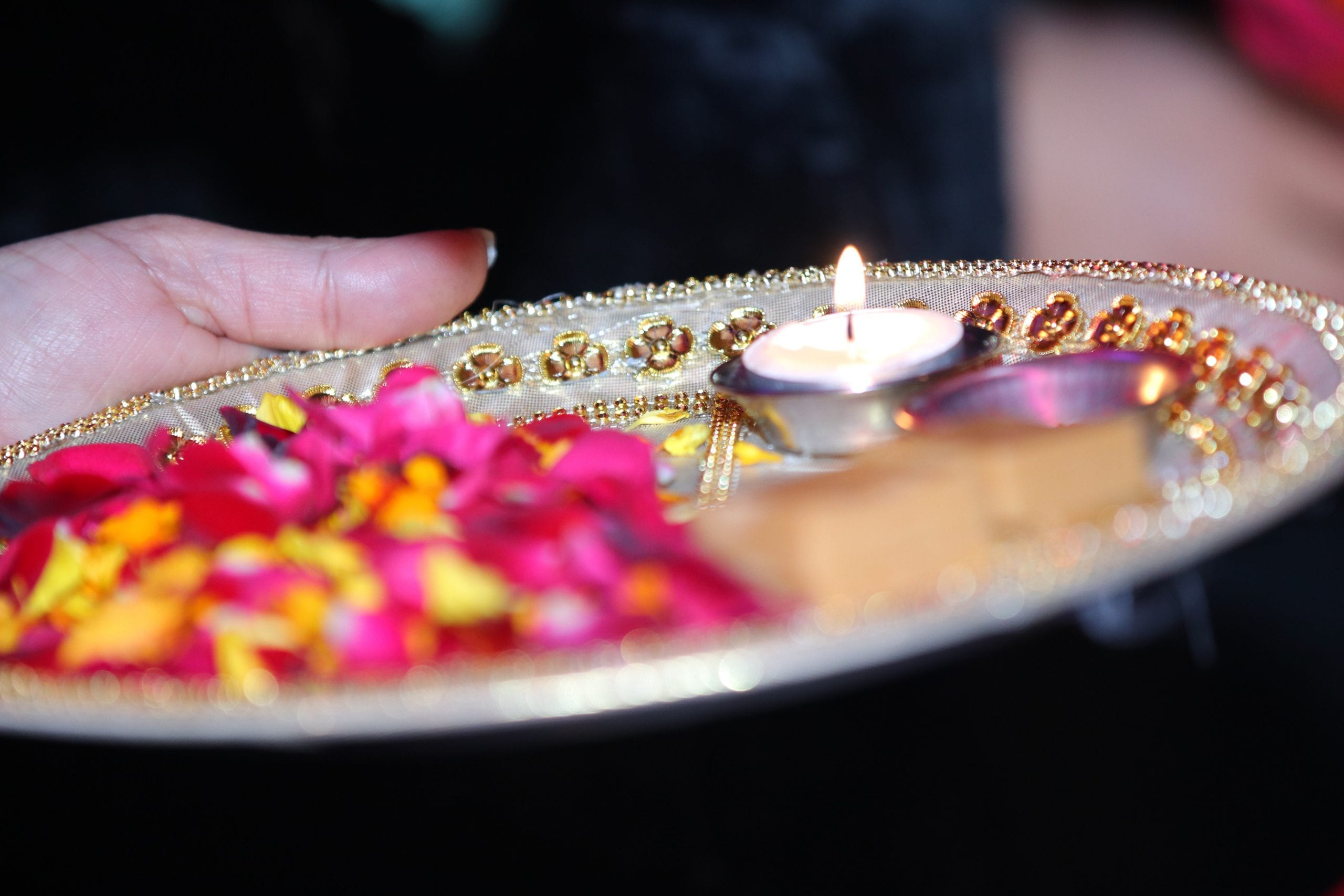 Most Hindu devotees do Lakshmi Puja on Dhanteras and buy utensils or expensive items like cars and jewellery. Dhanteras marks the first day of the big Diwali festival.

3. Diwali commemorates the spiritual enlightenment of which two saints? 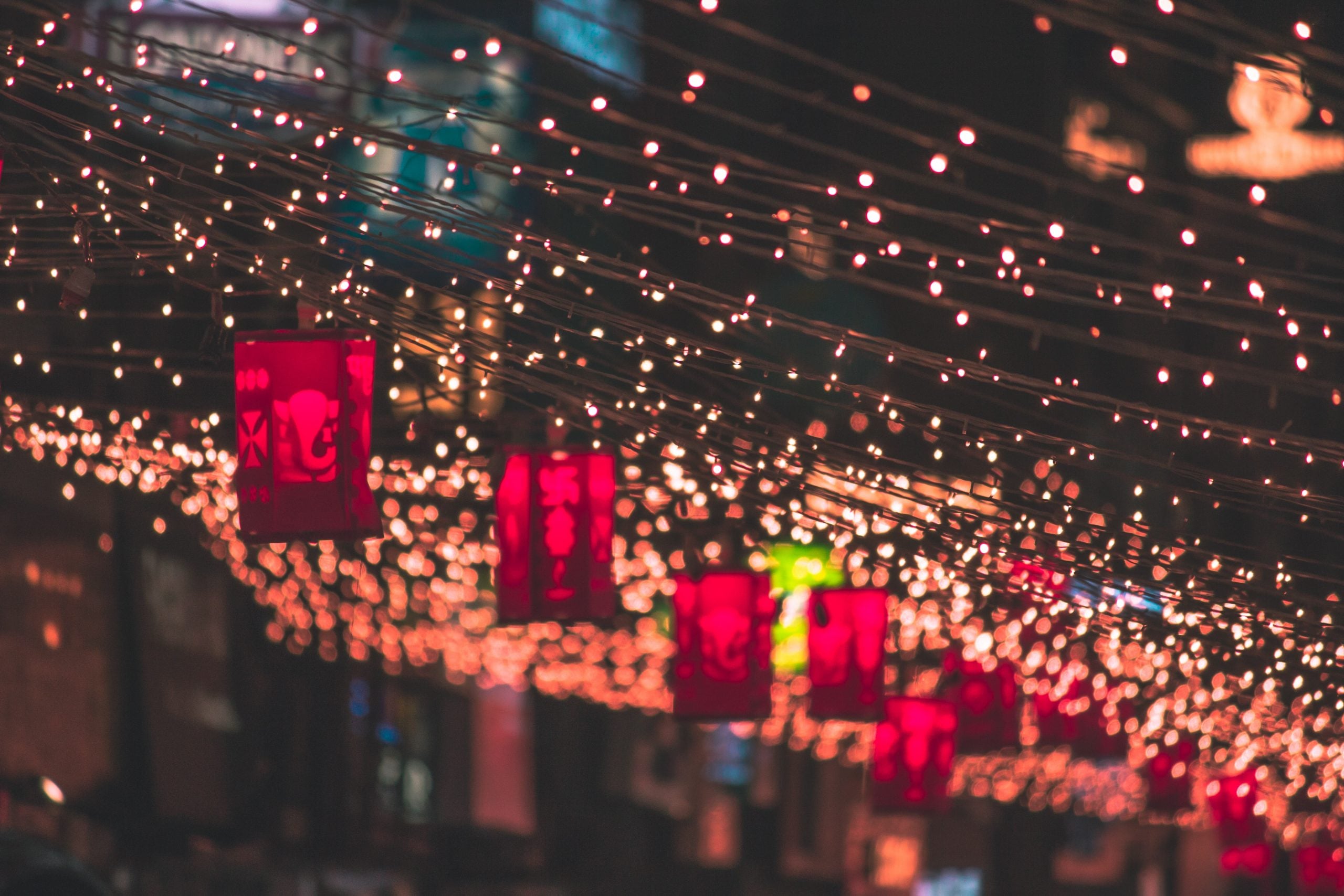 One of the most revered social reformers in the Indian context, Swami Dayanand Saraswati attained nirvana on the new moon day - popularly celebrated as Diwali. For Jains, Diwali marks the enlightenment of Vardhamana Mahavira (the 24th and last Tirthankara). He was the founder of modern Jainism.

4. Thalai Deepavali is a unique Diwali celebration of which Indian state? 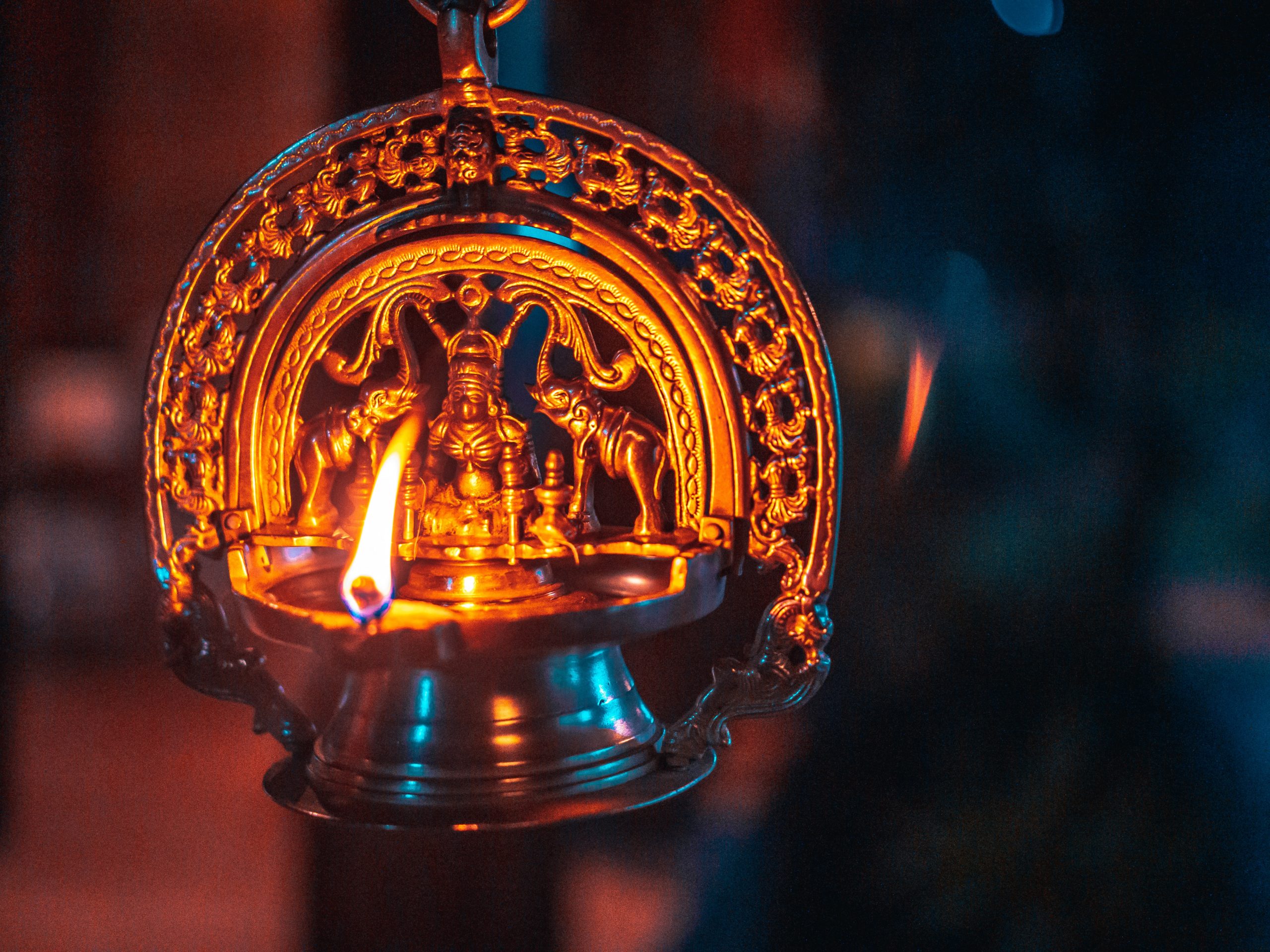 Among the usual Diwali customs and rituals, is the extra special, once-in-a-life event: The first Diwali after marriage. In Tamil Nadu, it is celebrated as Thalai Deepavali. During Thalai Deepavali, the newlyweds go to the bride’s parental home for revelry.

5. Which Hindu month is Diwali observed in? 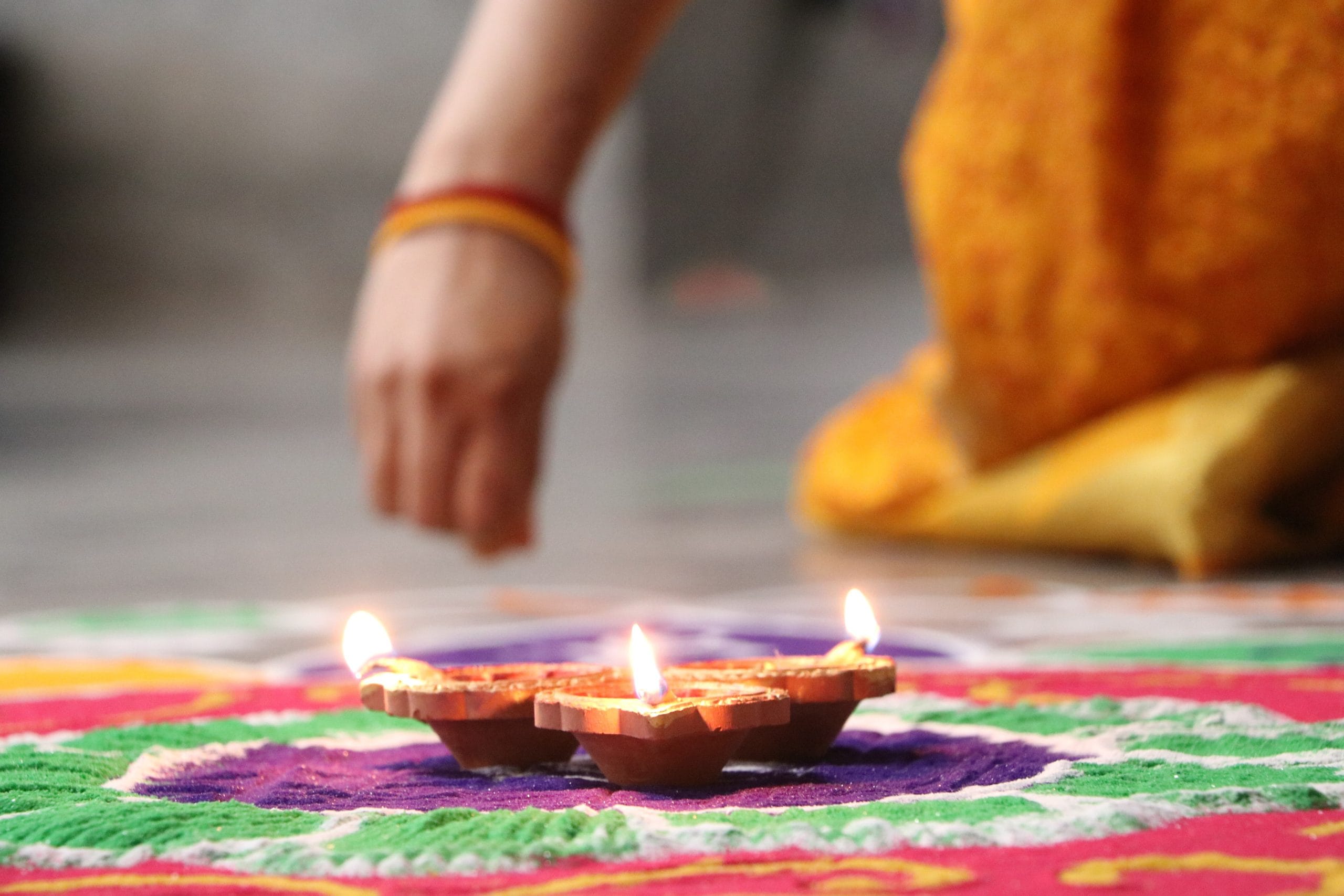 The festival of Diwali is celebrated during the Hindu lunisolar month Kartika (between mid-October and mid-November).

6. What does Diwali symbolise? One of the most popular festivals of Hinduism, Diwali symbolizes the spiritual "victory of light over darkness, good over evil, as this was the day Lord Rama along with Goddess Sita, and brother Lakshman returned back to Ayodhya after the successful win over Ravana in Lanka.

7. How long does the Diwali festival last? 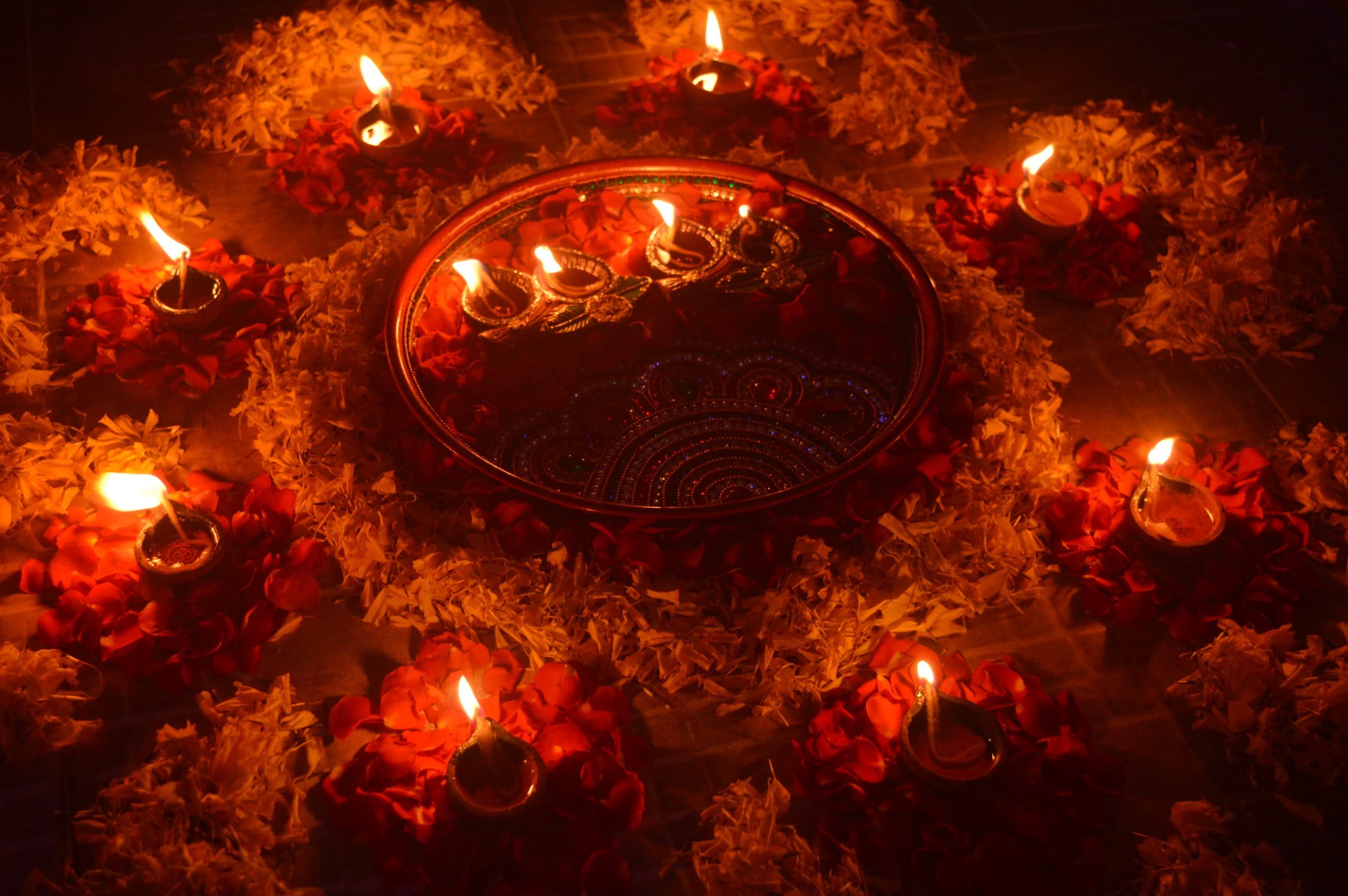 The Diwali festival actually runs for five days, with the main event happening on the third day in most places in India. It starts with Dhanteras, followed by Kali Chaudas/Naraka Chaturdashi, Diwali, Govardhan Puja and Bhai Dooj.

8. Which goddess is worshipped on Day 1 of Diwali? 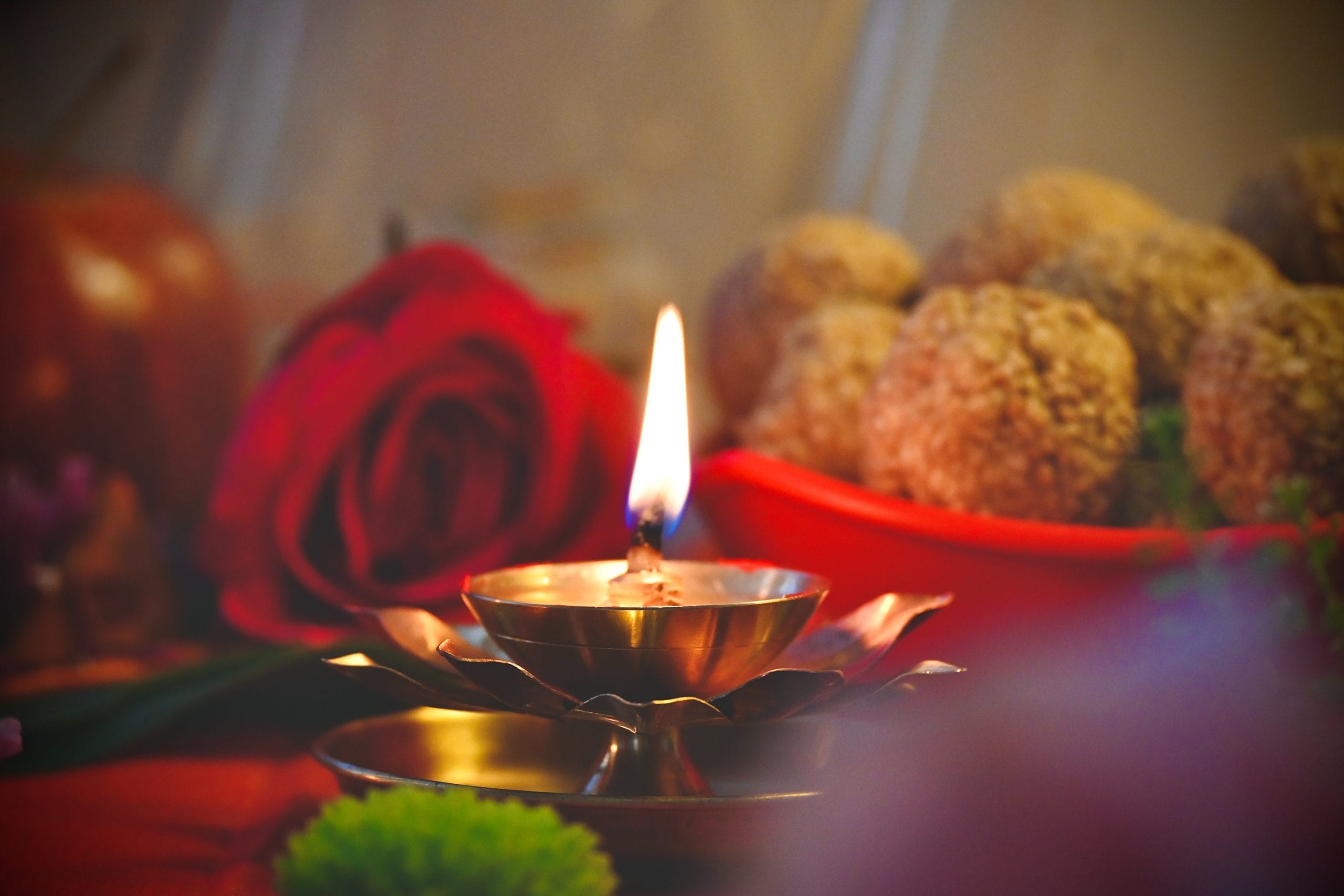 Scriptures have it that - during the ‘Samudra Manthan’ the most eminent entity obtained, was “Goddess Lakshmi” who arose on the Amavasya (new moon day) of the Kartik month. She was subsequently married to Lord Vishnu on the same night - the darkest night of the year. A multitude of emblematic brilliant lamps was lit to mark the auspicious occasion.

9. What is Bhai Dooj called in West Bengal? 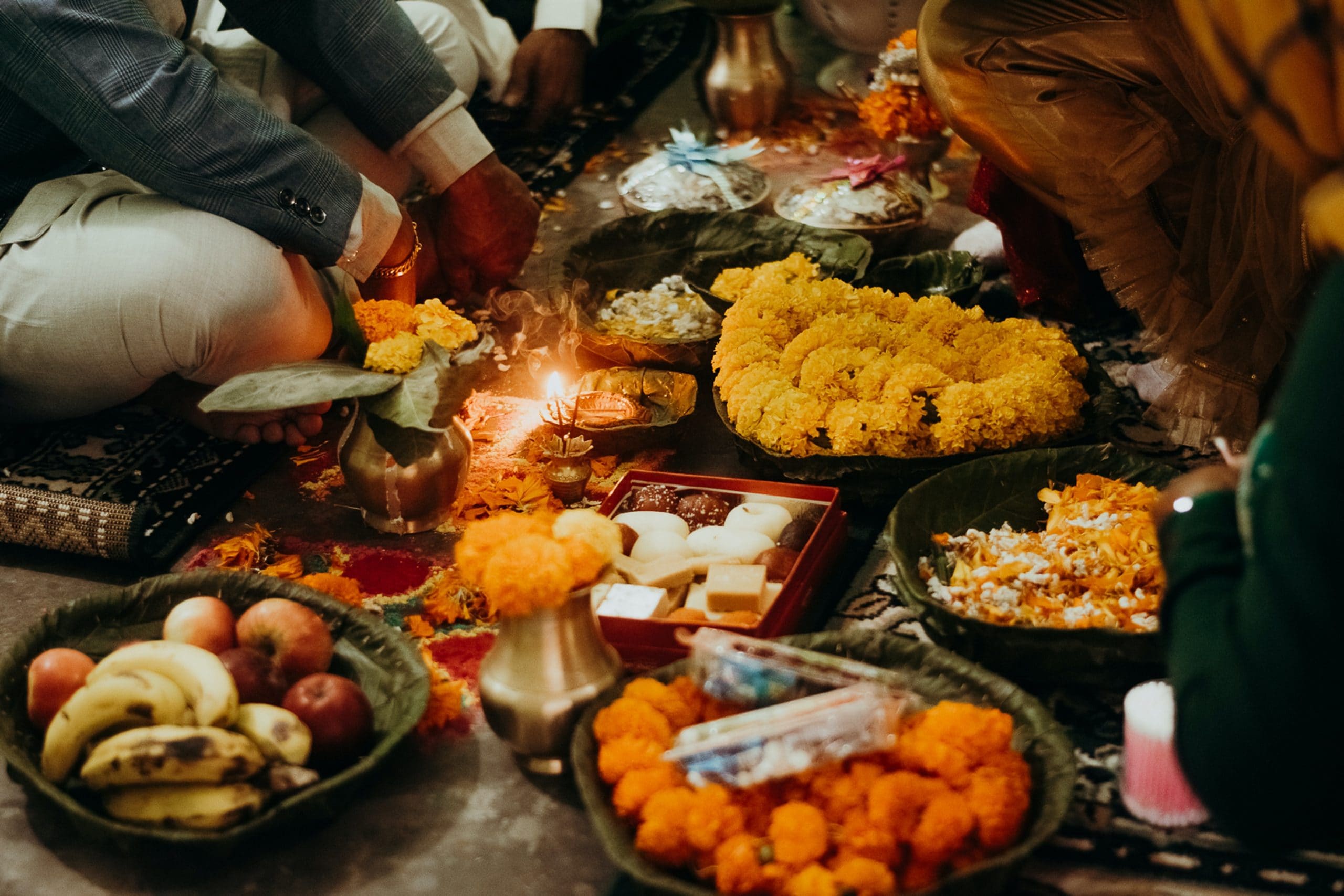 Bhai Phota or Bhai Phonta is a Hindu festival. The Bhai Phota ritual begins at the moment when Amavasya ends. Similar to the Bhai Dooj festival of north India, it takes place during Diwali on the second or third day of the month of Kartik.

10. What do you traditionally eat at Diwali? 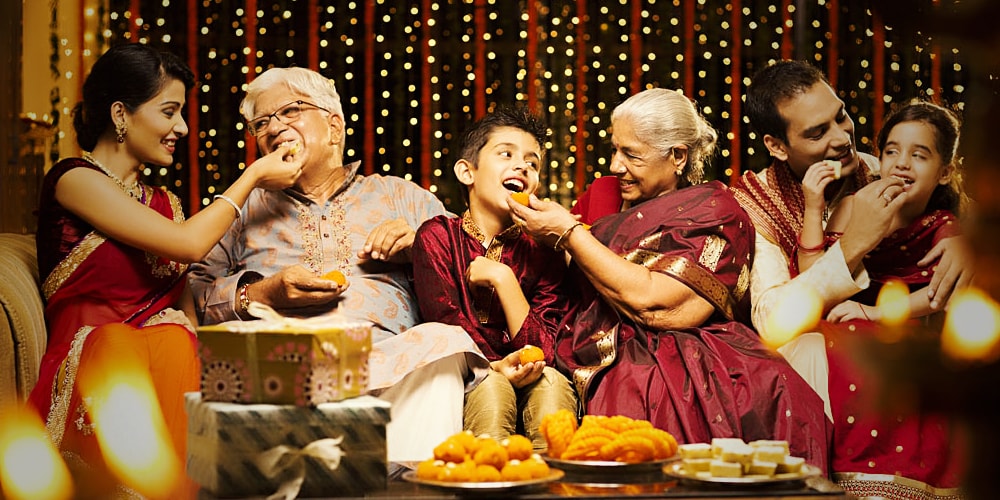 11. Where outside India does the largest Diwali celebration takes place? 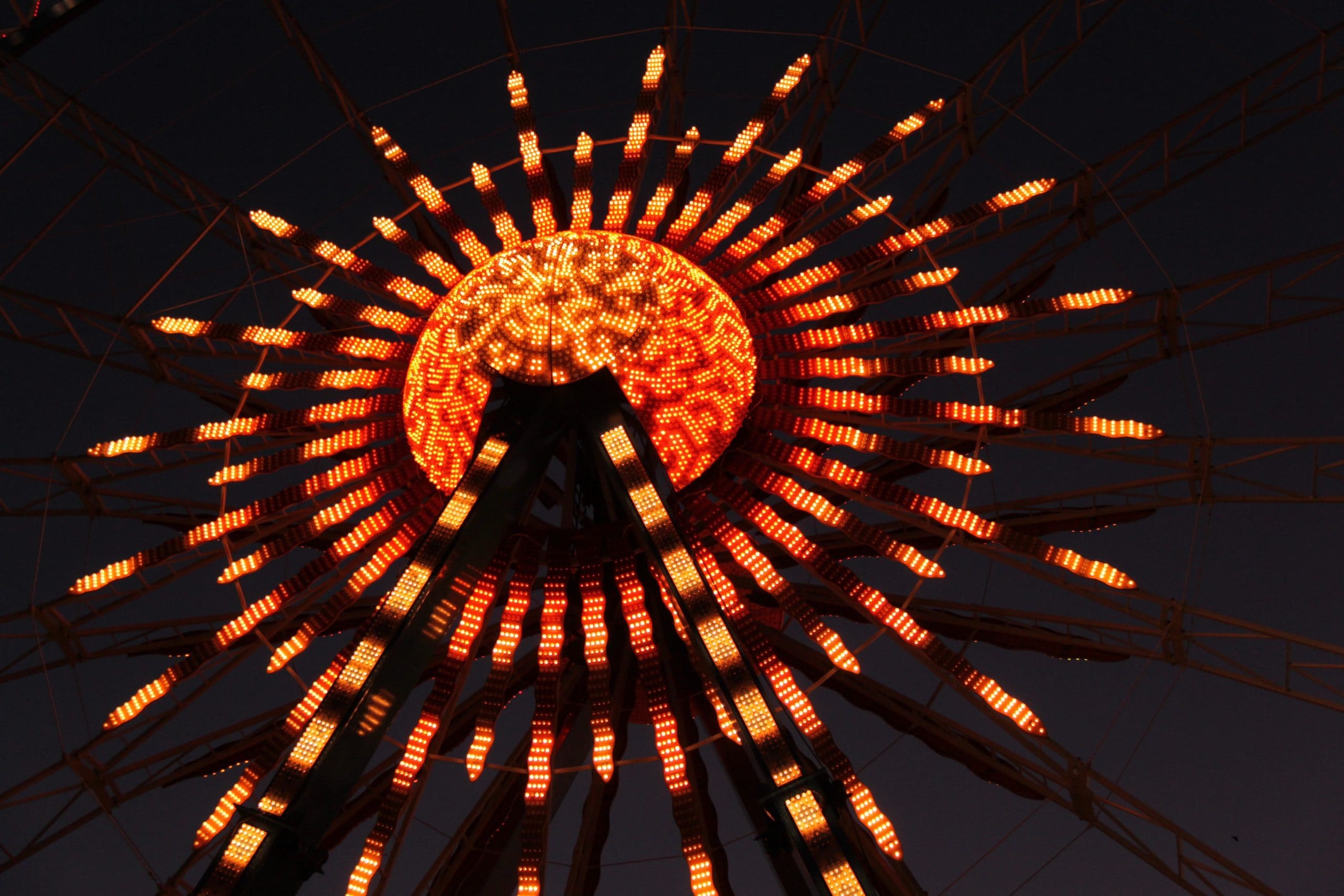 Diwali in Leicester is today recognised as one of the biggest celebrations of the festival of light outside of India. In the 1970s, the South Asian population in Leicester grew significantly, and as a result, so did the city's Diwali celebrations. The annual festival in Belgrave has attracted crowds of up to 45,000 in the previous years - many of whom travel from far and wide to see Belgrave Road illuminated by thousands of colourful lights.

12. Who killed Narakasura and when? 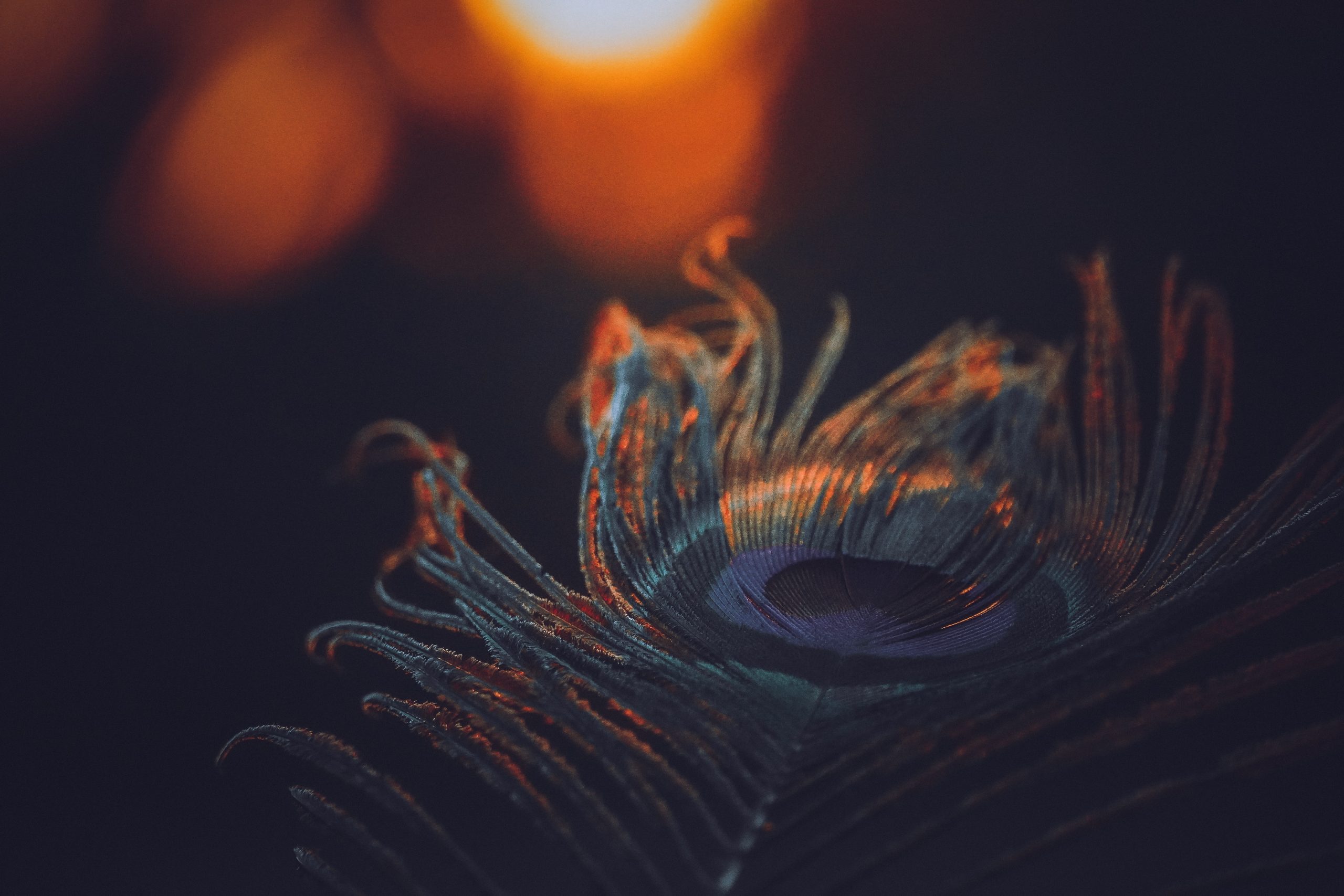 The Vishnu Purana brings us the story of Narakasura- an evil demon king who was blessed with immense powers. When Lord Vishnu incarnated himself as Lord Krishna in the Dwapara Yuga, he killed Narakasura on the night preceding Diwali and rescued 16000 thousand women imprisoned by him.

13. The foundation stone of the Golden temple was laid in Amritsar on the day of Diwali. True or False? Diwali is very special for Sikhs because it was on the same auspicious occasion of Diwali in 1577 that the foundation stone of the Golden Temple was laid in Amritsar.

14. Which deity is Goddess Kali said to have emerged from? 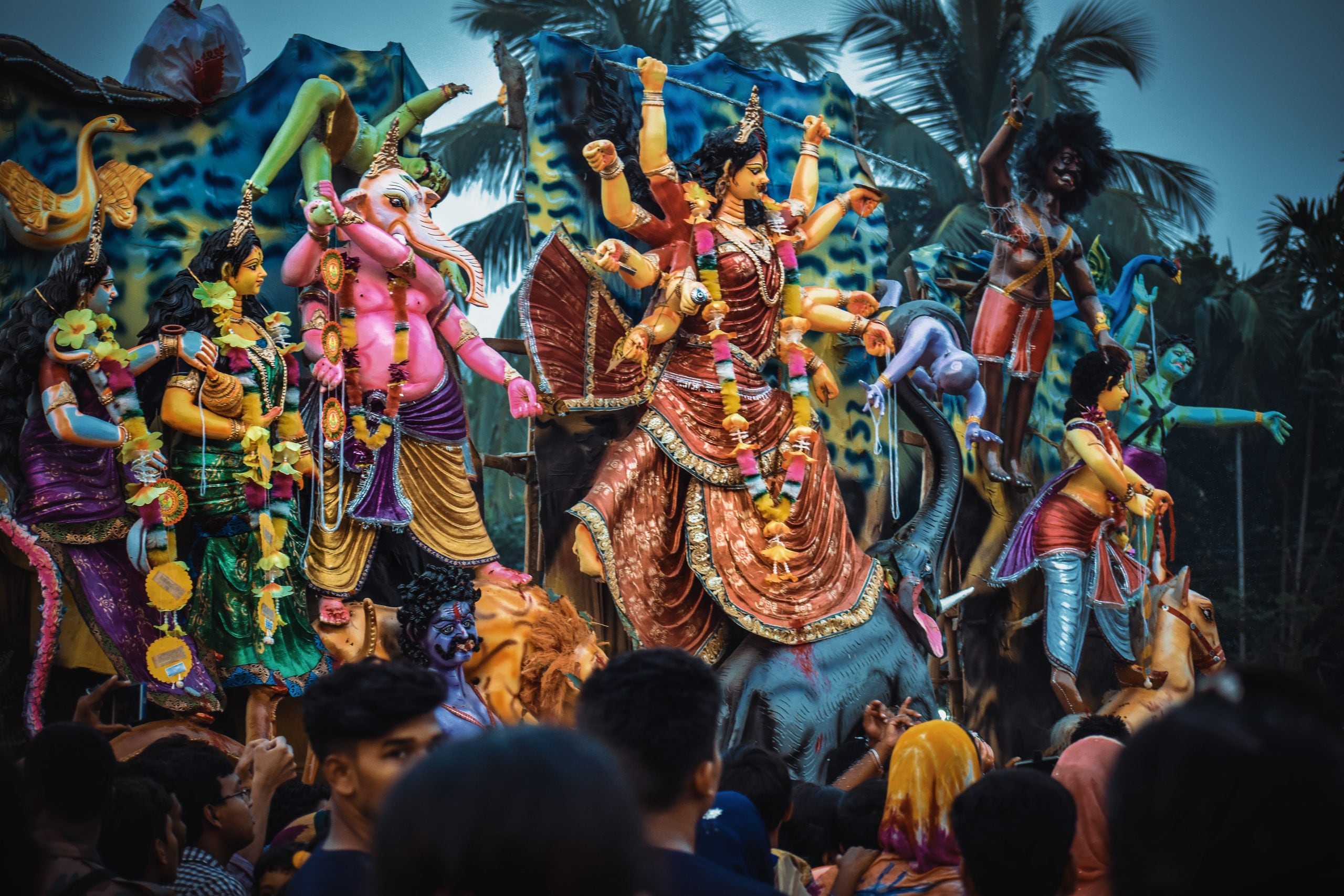 According to legend, Goddess Kali was born to protect the good from the evil. Said to be the personification of Nari Shakti from Maa Durga, Kali was born to save the heavens and earth from the increasing menace of the demons. After killing all the devils, Kali lost her control and began killing anyone who came in her way to be stopped only by Lord Shiva’s intervention.

15. The next day of Diwali, also known as Govardhan Puja is the Hindu New Year for many in India. True or False? Diwali is also the Hindu New Year. It is the time of the year when Hindu businessmen offer Pujas, start new books of account and pay off old debts to start a new year afresh, a good enough reason alone to indulge in the festivities.

The Ultimate Diwali Quiz: Let's see how well you know about the festival
Well, Diwali is much more than the holiday and food, and it seems you need to know a lot more on this legendary festival.
Every festival in India has a meaning, a story, a scripture behind it, and the more you read, the more you know about its marvels. You know quite a lot about the festival, but there are always new things to know. Read up and come back to take this quiz again!
Seems like you absolutely love Diwali! Well, who doesn’t? With everything bright and happy about this festival, we hope it brings you abundance of blessings and prosperity this year.

Explore more of our festival tour packages as they’d surely help you celebrate the festivals of India in all its glory. Best Hotels in Bangkok for the Perfect Stay 10 Best Places to Visit in Thailand for Magnificent Tourist Attractions