It’s certainly impossible for a country as vast and diverse as India to have a national dish. But when it comes to a particular beverage that’s simply loved by almost all of the country, it unarguably acquires the position of being its national drink. No marks for guessing it right…Tea, Chai or Chahaa is what we are talking about! A cup of tea makes everything so much better in India, isn’t it? The brewing hot tea in the kitchen is a ritual that unites our diverse country like nothing else every morning. We most of us waking up to a hot, refreshing, kadak cuppa of tea, it has indeed become an integral part of our lives. But how many of us know more about this daily dose of refreshment of ours apart from the brand name we buy? In this let’s learn more about the interesting history of tea, the benefits of chai, some of its lesser-known interesting facts the many types of tea that’s drunk around the world along with their origin, and more. Don’t you think all we chai lovers need to know all of this about something that makes our day, every day?!

The Origin of Chai

Although it’s difficult to tell who invented tea and how the first cup of tea came to be brewed, legend has it that the origin of chai was made when Emperor Shen Nung of China came across the Camellia sinensis (botanical name) plant back in 2737 BC, when a few leaves stirred by the wind fell into a pot of boiling water as his troops took refuge under the tree, giving the world its first taste of tea. Apart from this, there are other myths prevalent in the country of chai’s origin, that have their own version of the history of tea.

From Cha to Chahaa to Chai

The history and origin of the word Chai are very interesting. The Cha pronunciation came from the Cantonese ‘Chah’, especially Portuguese traders who settled in Macao in the 16th century. The Portuguese adopted the Cantonese pronunciation ‘Cha’, and spread it to India. Marathi has borrowed many words from Portuguese as it’s from here that comes ‘Chahaa’. Isn’t this quite interesting? The widespread ‘Chai’ in Hindi, comes from the Persian ‘Chai’.  Both the Cha and Chai forms are found in Persian dictionaries. They are derived from the Northern Chinese pronunciation of Cha, which passed overland to Central Asia and Persia via the Silk Road, where it picked up the Persia grammatical suffix – Yi before passing on to Urdu in Hindi as Chai. Yet another interesting trivia over here is, even in Russia, tea is called ‘Chai’, as in Hindi! Now you know how deep does India-Russia friendship run!

Did you know that a cup of chai packs in as much health as it does refreshment? Talking about a few nutrition facts about tea, it contains health-giving flavonoids and polyphenols, which are antioxidants that repair cells and in doing so, may help us fend off cardiovascular diseases, cancers, osteoporosis, diabetes mellitus, and other maladies. Having said this, drinking litres and litres of tea through the day and getting addicted to it can have some dire consequences on one’s health. Let’s always remember, everything is good only until it’s in moderation.

With places like Assam and Darjeeling known for their tea plantations in India, with Darjeeling tea even considered to be the ‘Champagne of Teas’, we have always known that the very best tea comes from high elevations and is hand-picked. Moreover, did you know, it takes around 2,000 tiny leaves to make just one pound of finished tea?!

You must have heard about people getting a ‘caffeine crash’ after excessive consumption of coffee or soda. However, with tea, you can rest assured that you are less likely to get it. The main reason being, the high level of antioxidants in tea slow the absorption of caffeine, resulting in gentler increase caffeine in our system and a longer period of alertness with no crash at the end.

Also, did you know that the first ‘iced tea’ in the world was made in 1904 at the World’s Fair in St. Louis, the USA? The exhibiting tea merchant Richard Blechynden whose plan to give away free samples of his hot tea to attendees went for a toss amidst a heatwave, he simply dumped a load of ice into the brewed tea to save his investment of time and travel and thus served the first iced tea ever.

Yet another interesting trivia related to tea is that, although tea didn’t reach most Europeans until the late 16th century, people were using ceramic teapots for as long as 11,000 years ago in Asia and the Middle East. 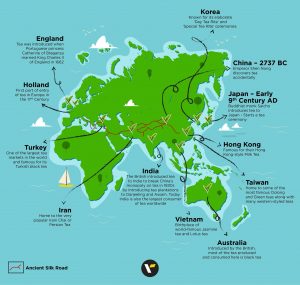 Today, tea has made its way to Number Two, only after water, on the list of most popular beverages around the world. Tea is generally divided into categories based on how it is processed and accordingly, tea comes in at least six different types or varieties. Apart from the popular black and green teas that most of us are quite familiar with, did you know, there’s also white tea, yellow tea, Oolong tea, and even post-fermented dark tea!  Moreover, with its origin in China, eventually, tea has gone a long way, quite literally, reaching far and wide and has found its place as a significant beverage in countries like Iran, Turkey, Australia, and even the coffee-loving USA. Here’s a colourful and interesting infographic, that traces the journey of tea around the world and lets you know some more of its interesting facts. Time to follow the tea trail!