Meghalaya, the hilly state in the Northeastern region of India, is known for its breathtaking landscapes, root bridges, and rainfall. The state has plenty to offer when it comes to new and exciting experiences for tourists. Meghalaya sightseeing destinations include places that bring you close to nature and history, and the sheer abundance of waterfalls due to the heavy rainfall in the region never seems to get old. Cherrapunji and Mawsynram are some of the most popular tourist attractions in Meghalaya that are famous for being among the ‘wettest places on the planet’, receiving a record rainfall of over 11,000 mm on an average.

The state has plenty to offer for nature and adventure enthusiasts. Tourist spots in Meghalaya include waterfalls formed by the torrential rainfall in the region, deep caves and caverns in the Archean rocks, national parks that host vivid life-forms, and museums that exhibit tribal artefacts and house some of the most exquisite creatures from the regional wildlife.

The hilly region is an exceptionally great option when taking family holiday packages as the tourist attractions in Meghalaya are varied and can be enjoyed by everybody.

Here are some of the Meghalaya tourist places that one can enjoy with their family: – Nongriat Root Bridges or simply the Double Decker Root Bridges are by far one of the most enticing tourist attractions in Meghalaya. Formed by the tribal communities over years of root training and bridge making, the unique structure is built with rubber-fig roots. The bridges are formed by shaping the malleable roots of the trees and are strengthened over the years as the trees and their roots grow. Since this bridge-building practice is native to the tribal people of Meghalaya, some of these spectacular structures go as far back as 500 years old.

The bridge, being one of the most important Meghalaya tourist places, observes a great number of tourists each year. Located near the village of Tyrna, the bridge can be experienced on a brief 2-hour hike, crossing the Umshiang River. There over 3500 steps that one must scale to reach the bridge to and from the base at Tyrna.

The hike through the dense forest of Meghalaya gives you a perspective into the world of the tribals as you get to experience their routes and ways that have been followed for centuries.

Although Root Bridges is one of the sightseeing places in Meghalaya that can be accessed throughout the year, according to northeast travel guides, one must avoid visiting this marvel during the full effect of the monsoon weather. During the monsoon season, the region experiences heavy rainfall, and thus, plush layers of greenery can be seen. At the same time, the bridges also get slippery and become a little difficult for children and the elderly to traverse through. Nohkalikai Waterfalls, at a height of 335 meters, is the fourth highest waterfall in the entire world. The natural marvel is formed by the heavy rainwater that runs down a verdant cliff and creates a colourful mist in the entire valley.

The waterfall is a significant destination among the Meghalaya tourist places due to its sheer size and splendour. The waterfall is located deep in the rainforest of the Khasi Hill and culminates into a pristine lagoon that shimmers with the gust of water flowing into it.

The falls are best observed during the monsoon season and there are multiple viewing points for one to observe the magnificent waterfall. The best viewing point is located about 4.4 kilometres from the Cherrapunji market, which is one of the top destinations among the Meghalaya sightseeing places, and allows for spectacular views of this amazing natural phenomenon.

Several fun activities can be enjoyed at the Nohkalikai Falls by people of all age groups. One could swim in the shimmering water of the lagoon or go hiking along the towering hills around the waterfall. With a view so beautiful, one can even indulge in some casual landscape and nature photography along with some bird watching at this beautiful Meghalayan tourist spot. 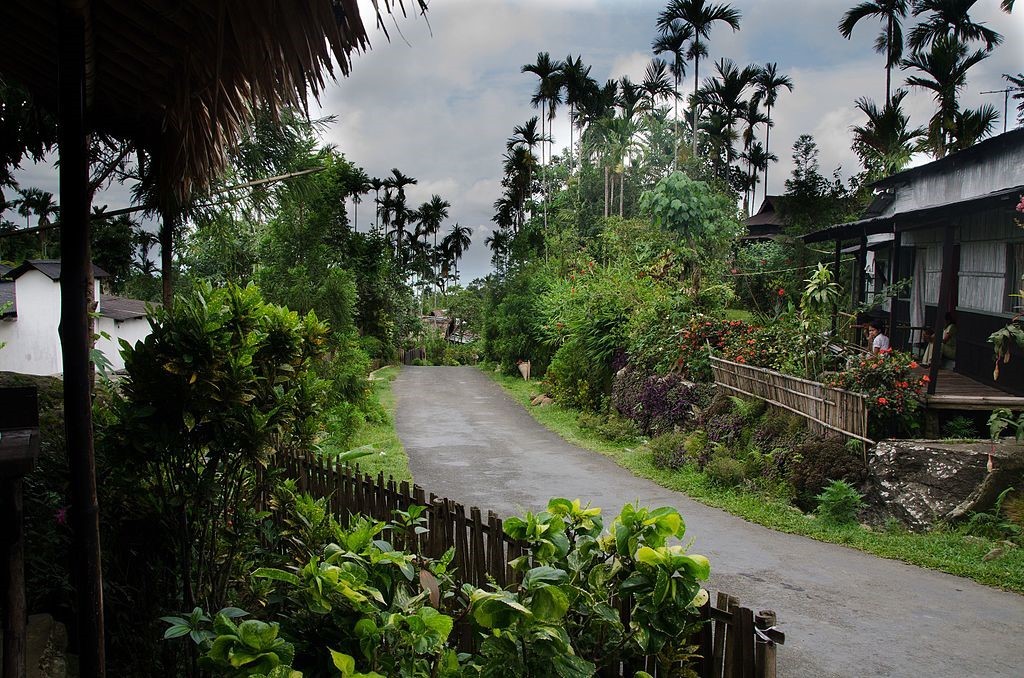 The village receives its clean status with the help of bamboo bins along all corners and bends of the village roads. And not just this, the village is a prime spot in Meghalaya tour packages due to its vicinity to the breathtaking nature reserve it is surrounded by. As the village is located at the very edge of the Indian borders with Bangladesh, one can observe the open fields across the border that invokes a sense of wonder. The village that is often referred to as God’s own garden is a common inclusion in the best of Meghalaya’s sightseeing places. There are several accommodation options one can choose from, but all the options available provide the tourists with an opportunity for simpler living, which is a blessing in disguise in this day and age.

The village is located around 90 kilometres from Cherrapunji and is not easy to access, but the experience is definitely worth the time and effort. Located about 5 kilometres south from Cherrapunji, Mawsmai Cave is situated in the heart of the Cherrapunji-Mawsynram Reserve Forest and is regarded as one of the top Meghalaya tourist spots. The cave is part of an extended cave system of the Cherrapunji region and was first discovered and explored in the year 1844 by British expeditions. To this date, there are several research and explorations carried out in the region.

The Mawsmai Cave is by far the most renowned cave among all the caverns in the region and hosts a large number of tourists inclined towards the Meghalayan nature sightseeing experience. This is due to its accessibility from Cherrapunji and the complexity of the cave system.

The cave has formed due to centuries of rainwater carving through the Archean rock of the region. The cave also has its own ecosystem with a climate and ecology to match the same. Balpakram National Park is one of the most famous Meghalaya tourist places that are referred to as ‘the traveller’s paradise’ with beautiful nature exhibits and breathtaking landscapes. Balpakram means the ‘land of perpetual winds’, and as the name suggests, the national park enjoys winds full of gusto flowing in from the west. Amidst the picturesque greenery of the national park, you can find scores of animal species such as Red Panda and Indian Bison along with rare medicinal herbs that are native to the specific region.

The park is one of the most vivid escapes into nature in Meghalaya with several sightseeing destinations and experiences to offer.

The gorge of Balpakram is equally famous and is easily one of the most discreet destinations among all of Meghalaya tourist places. Elephant Falls is located 12 kilometres from Shillong and are another one of the famous Meghalayan tourist places. The falls have 3 steps of which the first two are covered by the dense forests of the region whereas the last step is the most picturesque and beautiful spots that one can visit in Meghalaya. The falls get their name from the rock formation at the bottom that resembled an elephant but were deformed in an earthquake in the year 1897. The rock is gone but the name has stuck around. The falls are a great place to relax and unwind while enjoying the misty winds from the falls.

The word ‘scenic’ takes a new definition when you are in Meghalaya; it is ubiquitous in everything you see around when here.