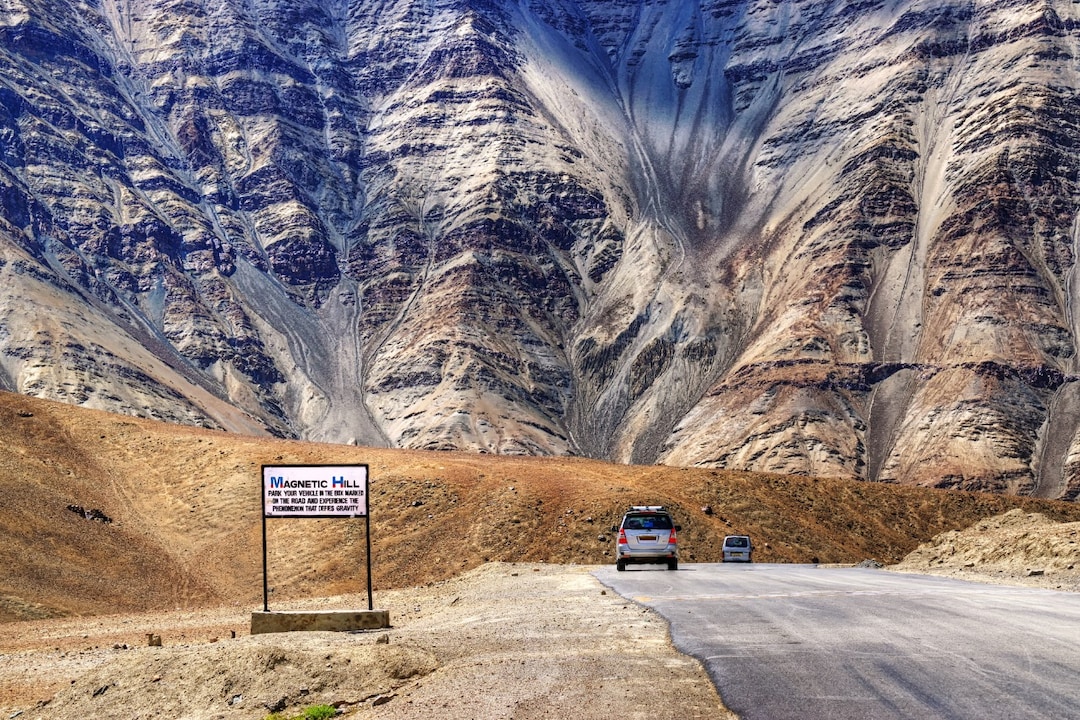 Magnetic Hill in Leh: A Zero Gravity Place of India

Who isn’t fascinated by the miracles of nature? If you too love the idea of them and wish to experience some of nature’s best wonders, Magnetic Hill in India would be the right choice for your next adventure. This place is especially recommended for those who are planning a trip to Leh Ladakh.

So, what’s so special about this place? Well, the Magnetic Hill in Leh is famous for its gravity-defying occurrence. As a natural phenomenon, gravity attracts things towards the earth, which means they fall downwards when let free. However, at this majestic destination, objects appear to be moving uphill when let free. So, what is the explanation for this? Let’s start with geography.

Magnetic Hill lies somewhere along the Leh-Kargil-Srinagar National Highway in the Trans-Himalayan region at an altitude of 14,000 feet. Sindhu river flows to the east of the hill, making it a scenic location to capture photographs. All Leh Ladakh travellers would agree that Magnetic Hill is one of the best places to visit in Leh Ladakh.

The distance from Leh to Magnetic Hill is around 30 km and it is marked by a yellow signboard that reads “The Phenomenon That Defies Gravity”. There is a white marked box on the road to park your vehicle inside it. When parked in neutral at the indicated spot, vehicles begin moving forward at a speed of almost 20 km/h. The road along which the vehicles move is known as Magnetic Road.

Magnetic Hill in Ladakh, India is a sibling to Mount Aragat in Armenia. Mount Aragat, just like the Magnetic Hill, seems to be going upwards when it is actually going downhill. This mysterious phenomenon has created a lot of buzz and attracts tourists every month who come to find explanations for the occurrence. The locals too have interesting stories to tell about Magnetic Hill in India that make this phenomenon all the more riveting.

Theories Behind the Phenomenon

There are a number of theories surrounding the Magnetic Hill in India. Some of them hold logic and some are stories told by those who live there. However, all these are theories and we don’t know for sure if they are true.

The Stories from Locals

Residents believe this road to be a literal stairway to heaven. It’s their belief that the road was once used to send the doers of good deeds or ‘karma’ to heaven. As for those who failed their karma, they never found their way to the land above. Other than this theory, here are two compelling theories that can resolve the mystery of the Magnetic Hill in India and its upward movement:

The most popular one, yet not proven, is the theory which says that the hill has a strong magnetic force emanating from within, as a result of which it pulls vehicles in the vicinity towards it. It is also said that the magnetic force in the area is so strong that fighter planes of the Indian Air Force exclude the route around Magnetic Hill in Leh from their flight plans so that they don’t face magnetic interference on their devices. This has been experienced and testified by many travellers from across the world.

As awe-inspiring as it sounds, the Magnetic Force Theory has never been verified by scientists, and according to a few researchers, a more widely accepted theory (and the most likely one) is the Optical Illusion Theory. This theory says that the Magnetic Hill in Leh is a “Cyclops Hill” that has no magnetic force emanating from within; rather, it is just an optical illusion. According to this theory, the Magnetic Hill looks like an upwards slope, but in reality, it goes downhill and it is an optical illusion that makes it look like an upslope. So, when you see the vehicle going uphill, it is actually going downhill.

How to Travel to Magnetic Hill

There are various ways through which one can travel to the Magnetic Hill in Leh Ladakh. Here are details about the air, train, and road routes, so that you can choose your travel as per your convenience:

Air travel is one of the easiest methods to travel to Magnetic Hill in Leh Ladakh India. The nearest airport, Leh International Airport, is located at a distance of 32 km from the place. People from all locations across the country can easily reach the airport as it is well-connected with major airports in India. From the airport, travellers can take a taxi to reach the destination.

Train travel is not the best mode of transport for those who wish to see the Magnetic Mountain in India, as the nearest railway station to Leh Ladakh is Jammutawi, which is around 700 km away from Leh Ladakh. However, if this distance doesn’t bother you, you can easily reach the place from Delhi. Jammu Tawi is well-connected to Delhi by railways. After reaching Jammu Tawi, you can cover the remaining distance to Magnetic Hill in Leh Ladakh by booking a taxi. Alternatively, you can rent a car or a bike, which is the most preferred mode of transport by travellers just for the experience of it.

If you are travelling from the National Capital Region of India, the Manali-Leh highway makes for the easiest and the most convenient option to reach Magnetic Hill in Leh. From Himachal Pradesh, many public and private buses frequently run to Leh Ladakh. Travellers also prefer to travel from Manali to Leh in their own vehicle, which is at a distance of about 490 km. So you’ve picked your choice of transport and have reached the territory. Now what? Once in Ladakh, hit the Leh-Kargil-Baltic National Highway. After crossing 30 km or after 40 minutes’ drive, you will be able to spot a yellow board saying ‘Magnetic Hill’. This is your destination. On the way towards the Magnetic Hills on the Leh-Kargil National Highway, you will find the Hall of Fame and Gurudwara Pather Sahib, which are other tourist destinations apart from the Magnetic Mountain in Leh.

Things to Keep in Mind While Travelling

The area surrounding the infamous Magnetic Hill in India is majorly a barren region, located about 30 km away from Leh. Therefore, apart from tourists, it is more or less an isolated place. While you may find a few homestays in the area, it is advisable to check in to a hotel at Leh City and drive to the hill from there. Also, there aren’t many dining or takeaways options in the area, so make sure you carry enough food before you set out on your journey to this mystery hill. While it is recommended to take packaged food, protein bars, etc. while travelling to the Magnetic Mountain in India, do keep in mind not to pollute this amazing phenomenon of nature by littering the area with empty packets and other garbage.

The best time to visit Magnetic Hill in Leh is in the summer months from May to September, as the city may experience snowfall during the rest of the year. Some travellers prefer to take their bikes, cars, or any other vehicle to Leh and make it into a road trip and enjoy the scenes along the way. For others, we have Leh Ladakh tour packages that they can take and enjoy their trip without a worry. 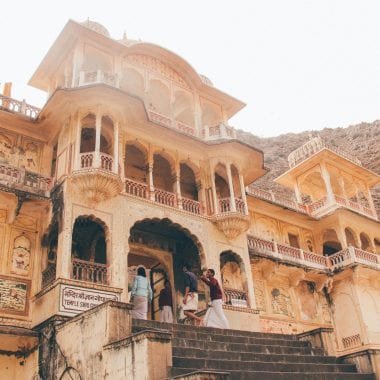