A trip to Leh, Ladakh is to be treated as a memory waiting to be imprinted into your consciousness. Often referred to as the “Mecca” for adventure enthusiasts, the city of Leh has its own charm. It is a town like no other. When you are in Leh, it is like being in the middle of nowhere in a city that offers you every basic amenity possible. The cold winds, harsh sun, patches of green in a cold desert, snow-capped peaks all around, amazing views of sunrise and sunset, the ringing of the bells in monasteries, the memories you make here will stay with you forever. Hence, this trip should be planned well, and given enough time, so that you get to see the best tourist places in Leh Ladakh.

Leh is a picturesque little town, in the district of Leh of the Indian state of Jammu & Kashmir. It was originally the capital of the Himalayan Kingdom of Ladakh, the seat of which was the Leh Palace, which was the former mansion of the royal family of Ladakh. Today, the town of Leh exists as a reflection of its unique blend of Tibetan and Indian culture. Leh is at an altitude of 3524 metres (11,562 ft.) and is connected to Manali, Himachal Pradesh through the extremely jagged Leh-Manali Highway that is one of the biggest tourist attractions in Leh Ladakh, especially for bikers. However, there are other modes of transportation available, such as cycles, jeeps, and buses. The best time for a Manali to Leh Road Trip is June to September. Keep a Leh route map handy if you are travelling on your own conveyance.

Let’s check the tourist places in the town of Leh, Ladakh that you must visit: – 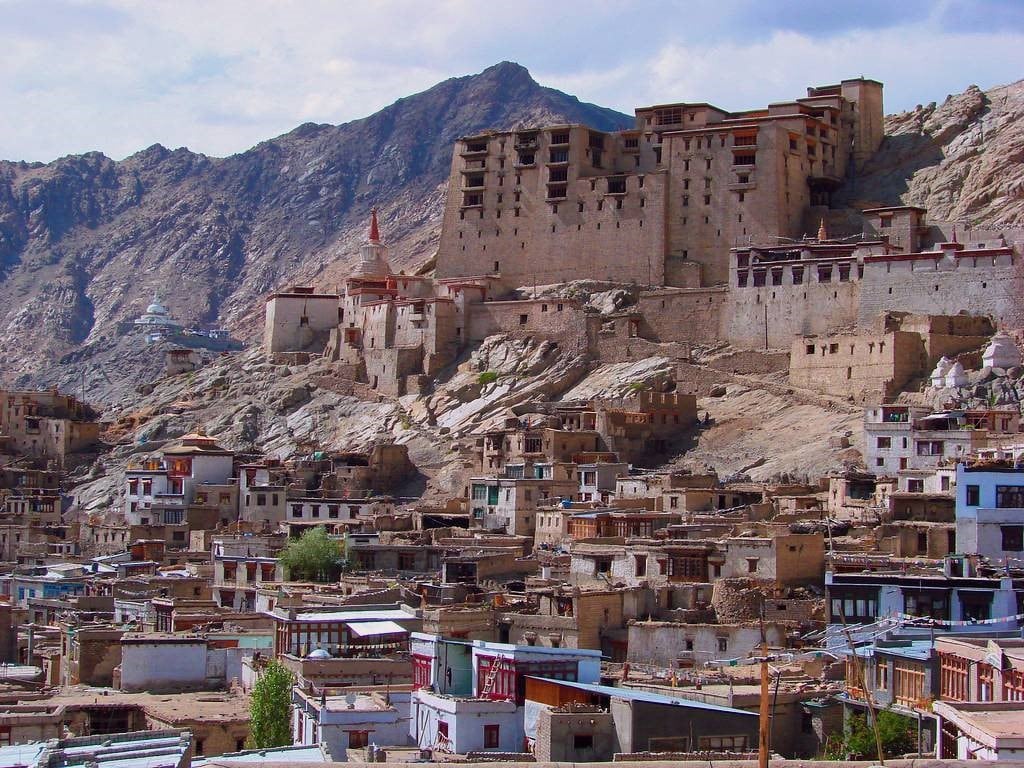 One of the most spectacular tourist places in Leh is the magnificent Leh Palace. Overlooking the town of Leh, this palace was built by King Sengge Namgyal in the 17th century and continued to be the King’s residence. One of the foremost tourist posts in Leh, you can also view the mountain of Stok Kangri in Zanskar towards South from here while the Ladakh mountain range rises behind the palace towards North. The night view of the palace is quite charming too though you will not be allowed inside after sunset. 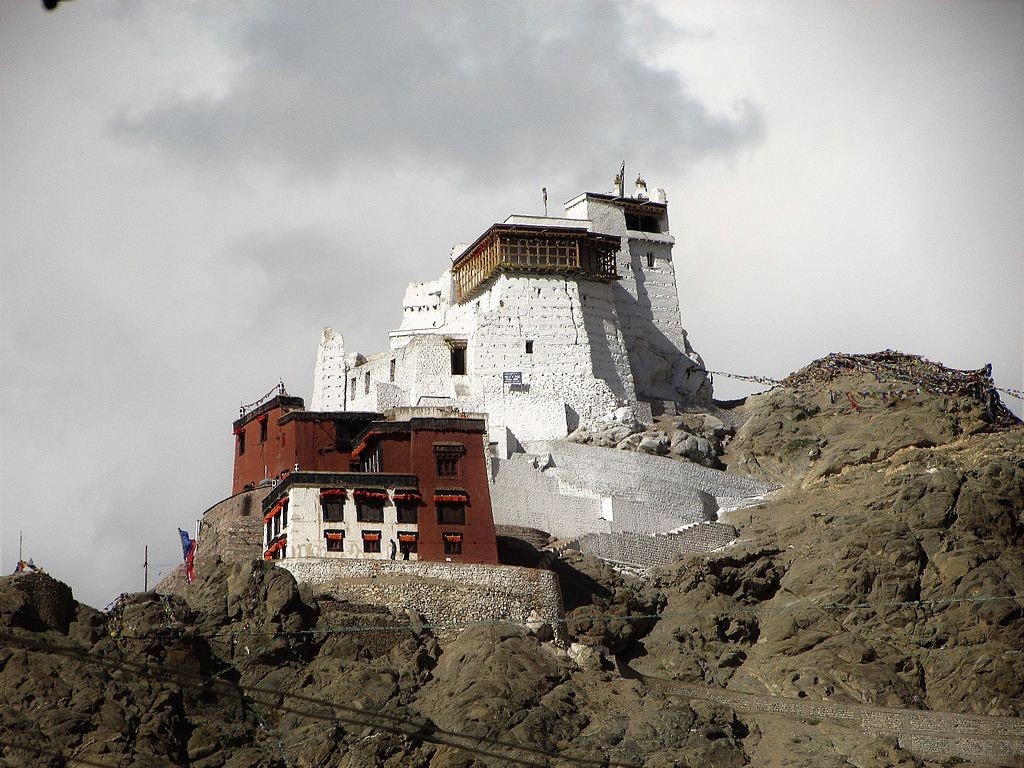 This is another ancient structure that is a little further up from Leh palace, built by King Tashi Namgyal in the 15th century. A 20-minute trek on a dusty zigzag trek will take you to the top of the cliff that houses Tsemo Castle. The castle itself is a quaint sight but the panoramic views you can get from the top are even better than what you will see from Leh palace. The breathtaking views of Ladakh should not be hindered by anything like windows etc. and hence the most sought-after mode of travelling to Ladakh is a road trip on a motorcycle.

Nubra Valley is a tri-armed valley located to the northeast of Ladakh valley. The common way to access this valley is to travel over the Khardung La pass from Leh town. Local scholars say that its original name was Ldumra (the valley of flowers). This valley is home to many popular tourist spots scattered across this Ladakhi valley, including the town of Diskit, a landmark statue of Maitreya Buddha that is 32 metres tall, monasteries among other pristine Ladakhi villages of Sumur, Turtuk, Kyagar (also known as Tiger), Tirith, and Panamik. There is also Hundar here, famous for the surreal blend of sand dunes and the flowing river Shyok. In Hundar, you will find the famous two-humped Bactrian camels which make for a rare yet magnificent sight! Thiksay Monastery is among the best tourist places in Leh Ladakh. Located atop a hill in the Thiksay village approximately 19 kms away from Leh town, it is the largest Gompa in central Ladakh. It is noted for many items of Buddhist art such as stupas, statues, thangkas, wall paintings, swords, and a 15-metre (49 ft.) high statue of Maitreya, the largest such statue in Ladakh, covering two stories of the building.

This is one of the most spectacular tourist places in Leh, built atop a hill in Changspa region. It is a white domed stupa built by a Japanese Buddhist Bhikshu, Gyomyo Nakamura. There is a road leading from Leh to Shanti Stupa so you can either choose to drive or first walk from Leh or climb up some 500 odd stairs to the top. It is another great vantage point offering mesmerizing views of the town of Leh with mountain landscapes in the backdrop and a spot to capture some amazing sunset shots. 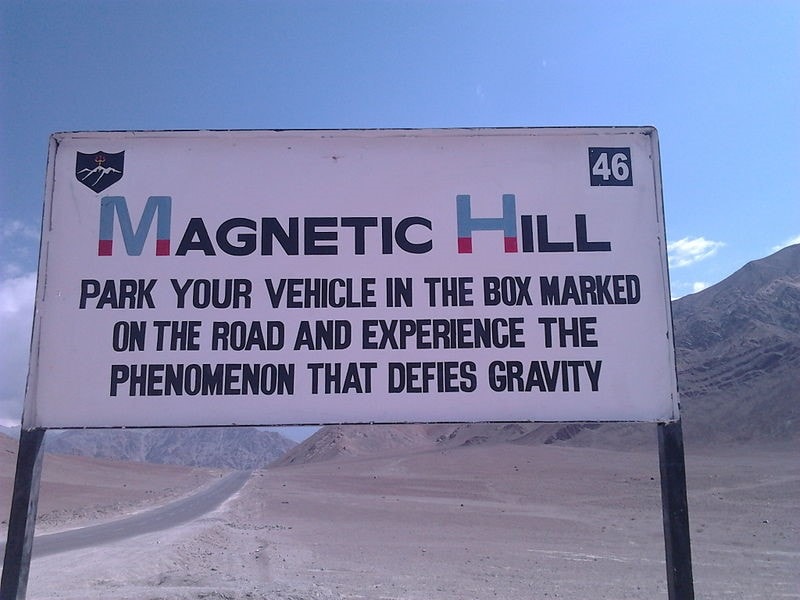 A popular point to stop by during your Ladakh road trip is the Magnetic Hill. The common belief about the place is that the hills here have magnetic properties and the pull will get any vehicle moving uphill even with the engine turned off. There is a lot of folklore about the place as well which terms the entire phenomenon as supernatural. Travel 35 kms on the Srinagar-Leh Highway en route to Leh to unravel the mystery of Magnetic Hill. Turtuk village is located in the Nubra valley and is the northernmost village of India. It was recently made popular by the Hollywood film, Mission Impossible 5: Fallout, starring Tom Cruise. Visit the small picturesque village to get a sense of serenity and isolation. Mainstream it may not be but it certainly one of the top tourist spots in Leh Ladakh that you should not miss out on. 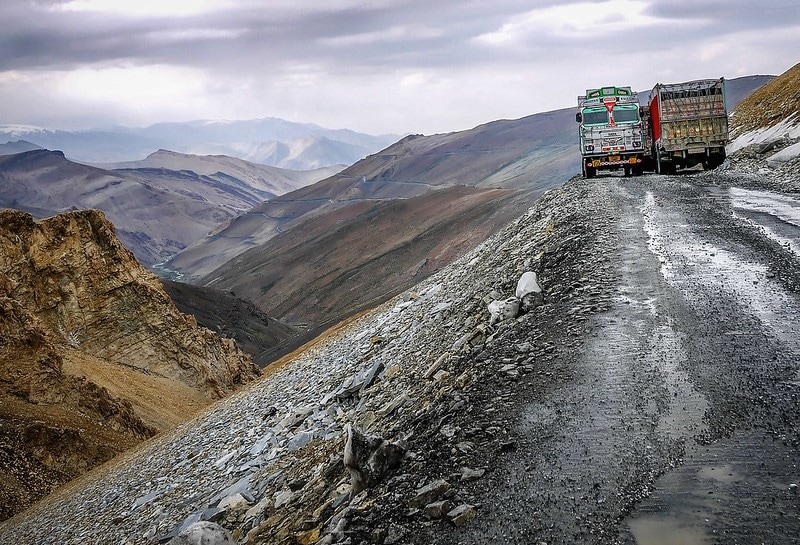 Also known as Tanglang La, this is a high paved mountain pass that is also one of the most popular tourist attractions in Ladakh for bikers. The sign on Taglang La pass claims to be at an altitude of 17,582 feet, which would be 5,358 metres, and also claimed to be the world’s second highest motorable pass. Well, that honour now belongs to Khardung La, the erstwhile highest motorable pass in the world. 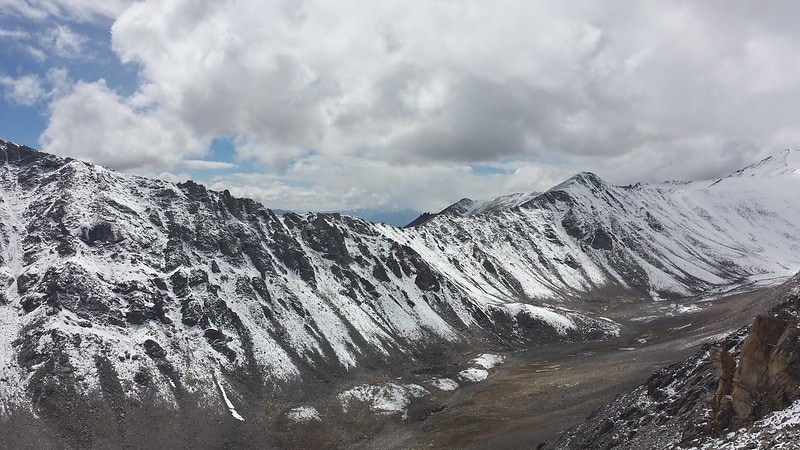 You knew this was coming!

One of the best tourist places in Leh Ladakh, Khardung La is a mountain pass of historical significance in the Ladakh region of Jammu and Kashmir. The pass on the Ladakh Range is north of Leh and is the gateway to the Shyok and Nubra valleys. The Siachen Glacier lays part way up the latter valley. Built in 1976, it was opened to public motor vehicles in 1988. The elevation of Khardung La is 5,359 m (17,582 ft). Khardung La lies on the major caravan route from Leh to Kashgar in Central Asia. About 10,000 horses and camels used to take the route annually. 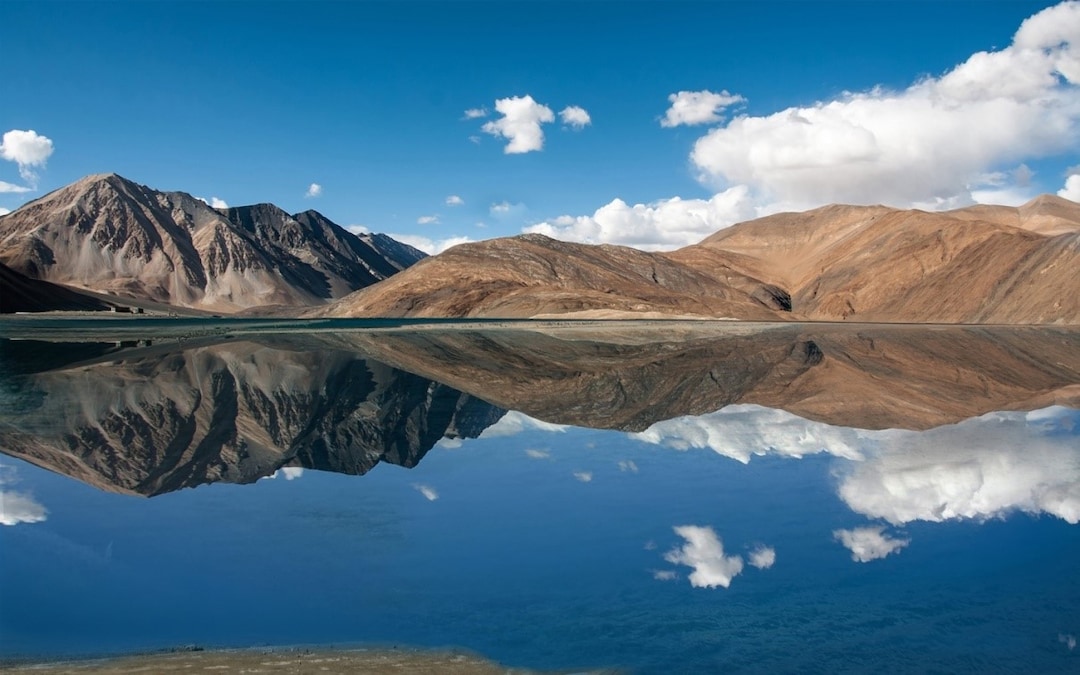 Pangong Tso in Tibetan refers to “high grassland lake”. It is a very picturesque, endorheic lake in the Himalayas that is at a height of about 4,350 metres (14,270 feet). Across this deep azure lake lies the Tibetan Autonomous Region of China. During winter, the lake freezes completely despite being saline water. It is not a part of the Indus river basin area and geographically a separate landlocked river basin. The lake turned into a popular tourist place in Ladakh since the filming of the Bollywood film, 3 Idiots that starred Aamir Khan, was done here. Pangong Tso can be reached in a five-hour drive from Leh, most of it on rough and dramatic mountain roads. 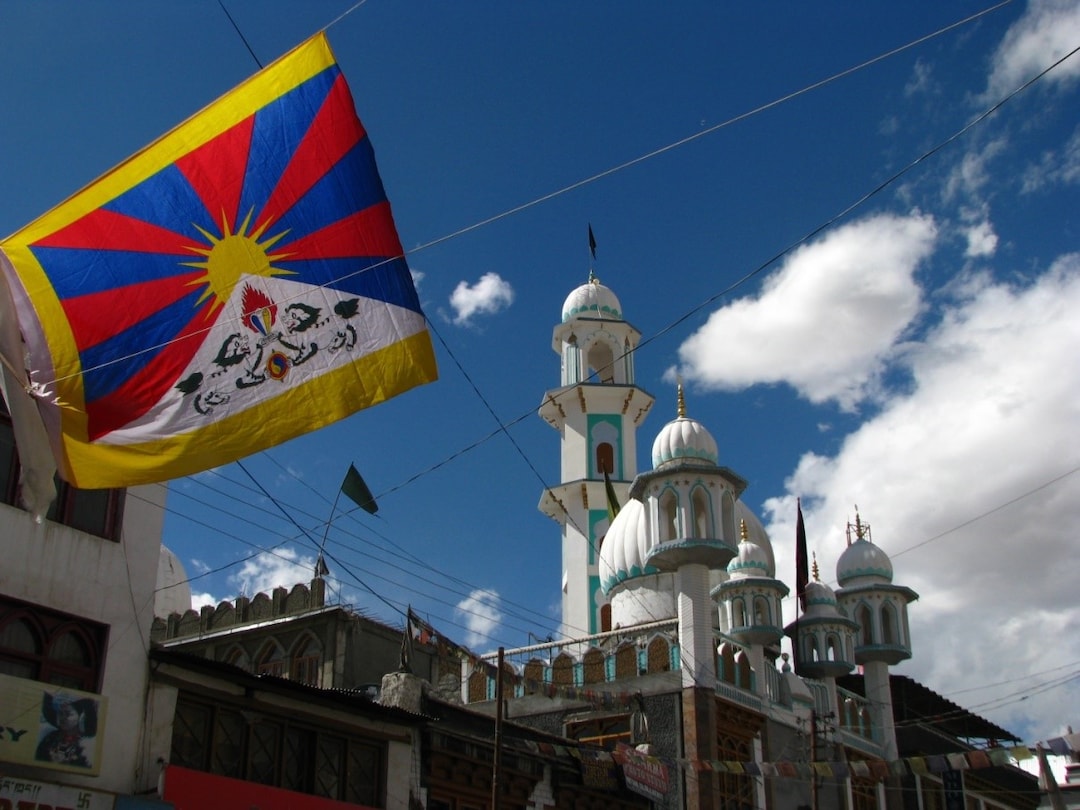 Jama Masjid in Leh is a historical mosque built in 1666-67 that has been rebuilt several times since. The mosque was a symbol of agreement between Deldan Namgyal, king of Ladakh and Mughal Emperor Aurangzeb wherein Mughals were to provide protection to Ladakhi King in return of a small fee. It is the biggest mosque in Ladakh and is also noted for Shahi Hamdan Memorial that is built to honour Mir Syed Ali Hamdani, a Muslim Sufi Saint. 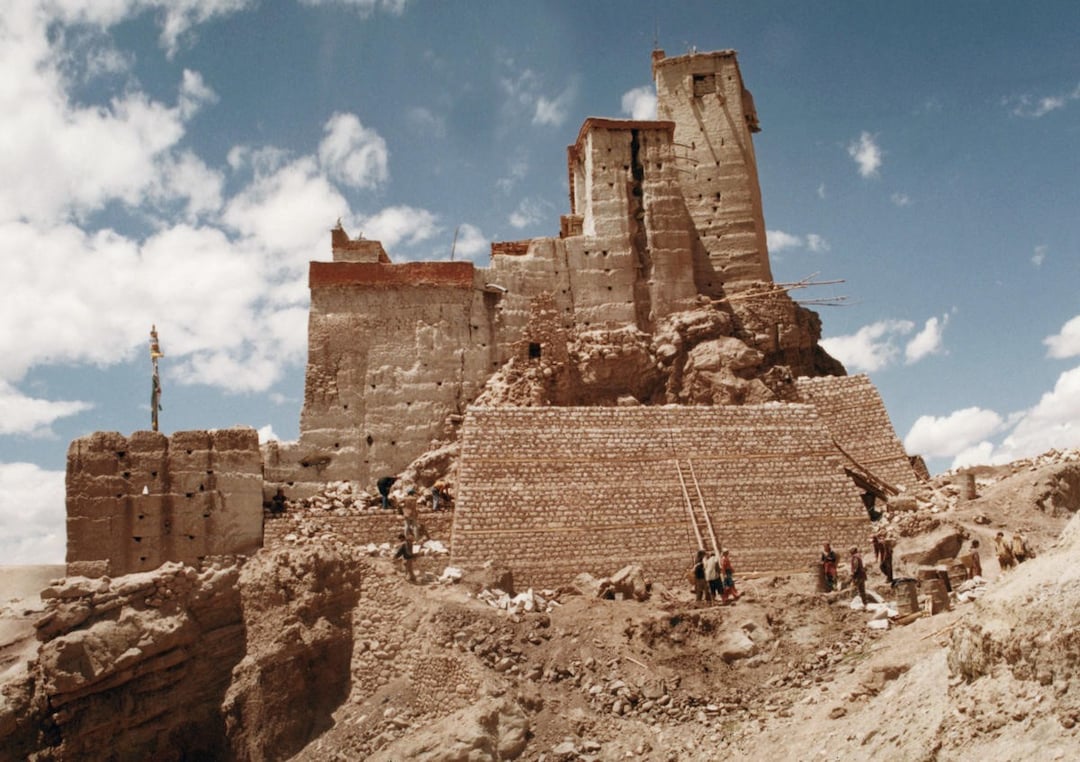 Located around 40 kms from Leh is the small village of Basgo which, in ancient times, was considered a political and cultural center of Ladakh, and is now one of the significant tourist places. The ancient Basgo Palace that also houses the Basgo Monastery is located here. The ancient palace was built in the 15th century but the Monastery is believed to be even older than that. 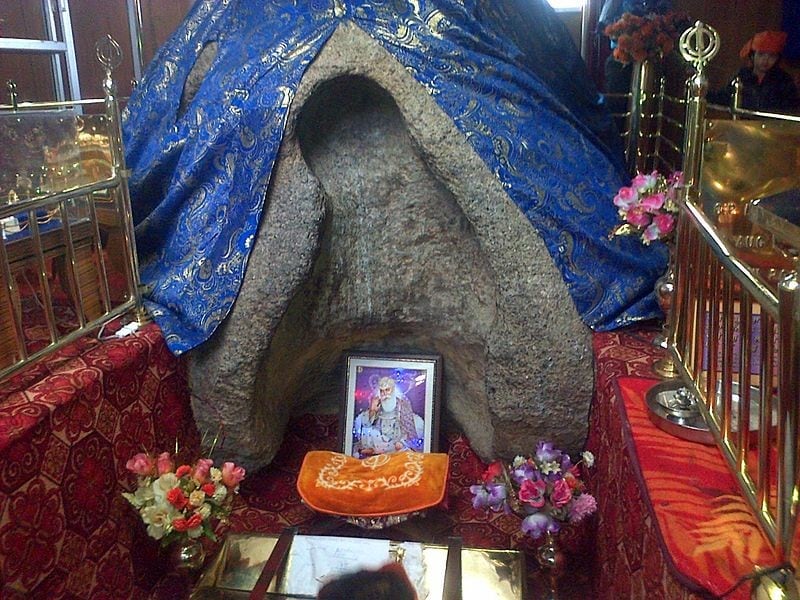 This rare, picturesque gurudwara is one of the tourist attractions in Leh and Ladakh. Located 25 kms from Leh on the Srinagar-Leh highway, it was built in 1517 to commemorate Guru Nanak Dev’s visit to Ladakh. It is noted for a huge stone that is believed to have Guru Nanak Dev’s imprint on it and another stone that is believed to have the imprint of a demon he encountered here. Both these stones are on display here. 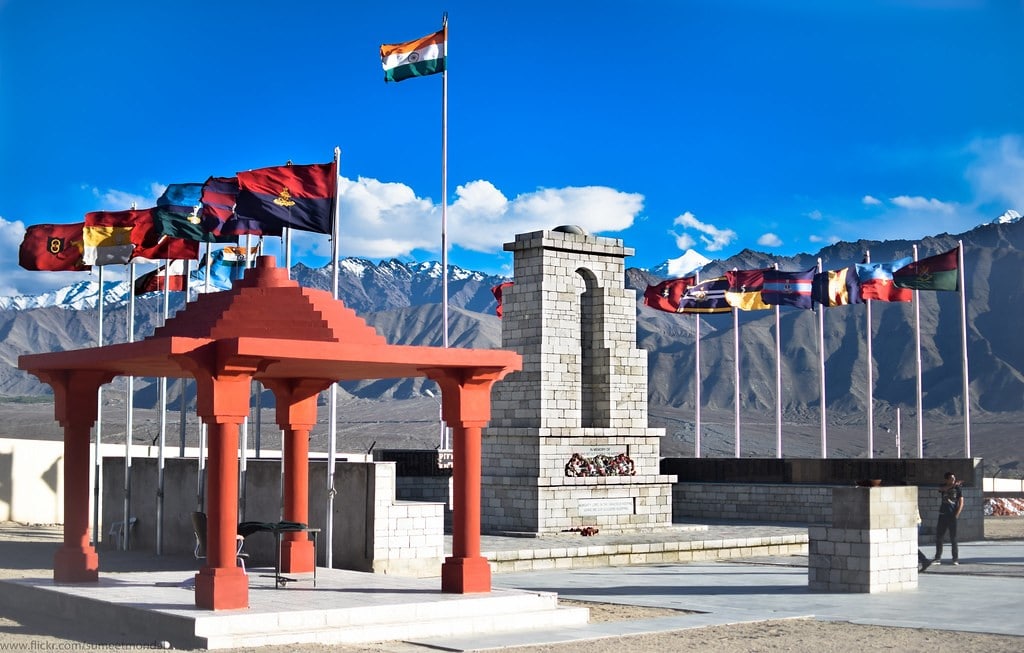 This is one of the most interesting places to explore in Leh. Hall of Fame is a museum constructed and maintained by the Indian Army, honouring the Indian soldiers who lost their lives during Indo-Pak wars and also commemorating the Army’s role in cloudburst relief in 2010. In the Siachen Glacier section, you will find a lot of information related to how our brave soldiers survive in such extreme conditions.

Often referred to as the land of high passes, Ladakh is what you call the art of god. Be it a solo trip to Ladakh, a group tour or one with your better half, the landscape of Leh Ladakh will humble you and give you a perspective that you will carry within you for the rest of your life.

Book a Leh ladakh holiday package and experience the thrill!