The centre of this big and diverse nation, Madhya Pradesh has a widely flourishing tourism sector. Known all around for its rich history and cultural heritage, the state is home to some of the most popular historical sites in the country. Given their unique architectural styles and historical significance, these tourist places in Madhya Pradesh draw people from different parts of the country and outside, to come and explore its land.

As the last vestiges of eras gone by, these impressive points of interest in Madhya Pradesh for visitors will give you a tour through time itself. No matter what you plan to do when here, you simply cannot ignore these prominent historical places in MP. So to give your trip a fulfilling end while you have the experience of your life, take note of some of the most popular historical places in Madhya Pradesh:

The Great Stupa of Sanchi 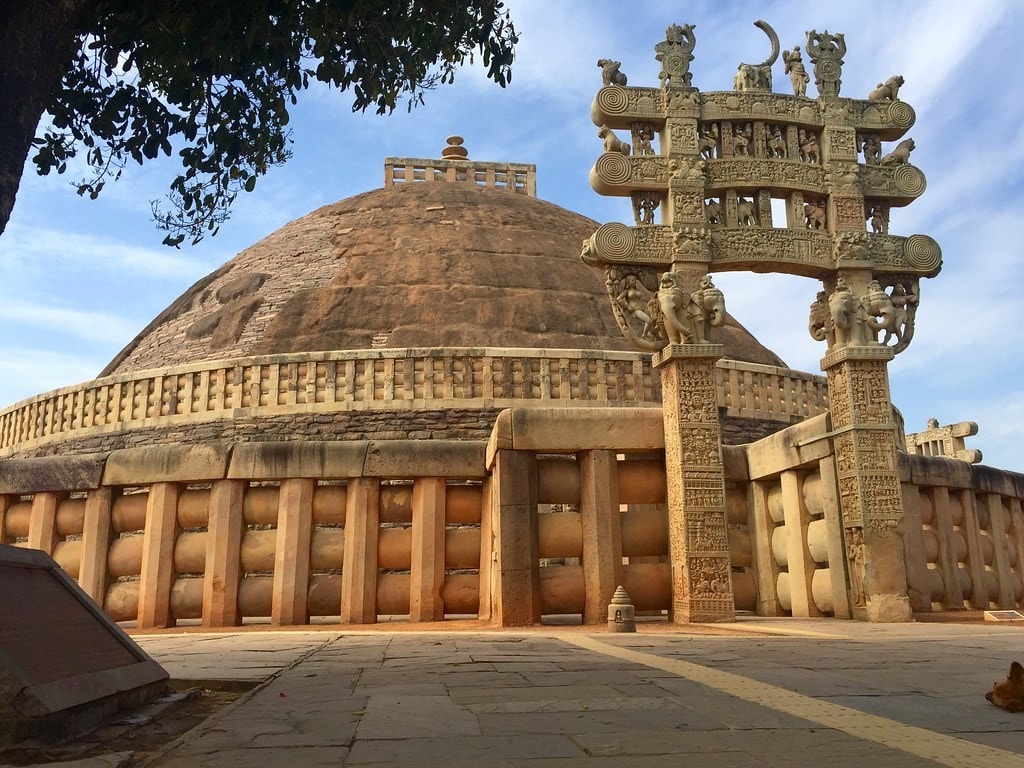 Located 46 kilometers north-east of Bhopal, in Raisen district, MP, Sanchi Stupa, better known as the Great Stupa, is a Buddhist complex that’s one of the oldest and most important structures within the country. Built originally by Emperor Ashoka in the 2nd century BCE, the Sanchi Stupa was a hemispherical structure made of bricks, preserving the relics of Lord Buddha. The stupa had a raised terrace enclosing the base and a stone umbrella and railing on the summit. Later on, during the reign of the Sungas, the diameter of the stupa was enlarged to almost twice its original size, while the structure itself was covered in stone.

Designated as a UNESCO World Heritage Site, the Sanchi Stupa is not only a famous historical place in Madhya Pradesh but also an important site for pilgrimage for the followers of Buddhism.

The Khajuraho Group of Temples 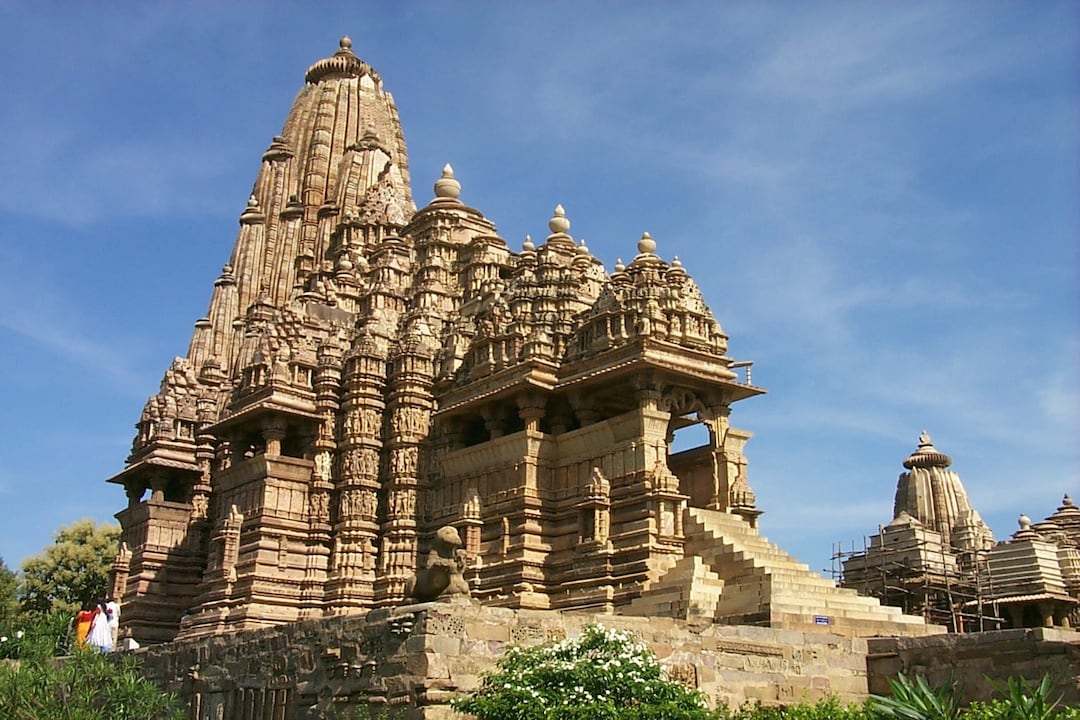 Another popular place of interest for tourists in Madhya Pradesh is this collection of Hindu and Jain temples in Khajuraho town of Chhatarpur district. Located 175 kilometers southeast of Jhansi, the Khajuraho group of temples dates back to the 9th and 10th centuries when the Chandela dynasty of Rajputs constructed these. As per historical records, there were as many as 85 structures occupying an area of twenty square kilometers by the 12th century. However, only 25 of these temples have managed to survive the ravages of time, of which the Kandariya Mahadev temple is the most popular. Dedicated to two different religions, the Khajuraho group of temples is best known for their Nagara-style architecture, intricate details, and erotic themes.

Mentioned in the works of several ancient scholars, right from Al-Beruni to Ibn-Batutta, the Khajuraho group of temples is most definitely a one-of-its-kind structure.  You must include these temples in your tour package to Madhya Pradesh. 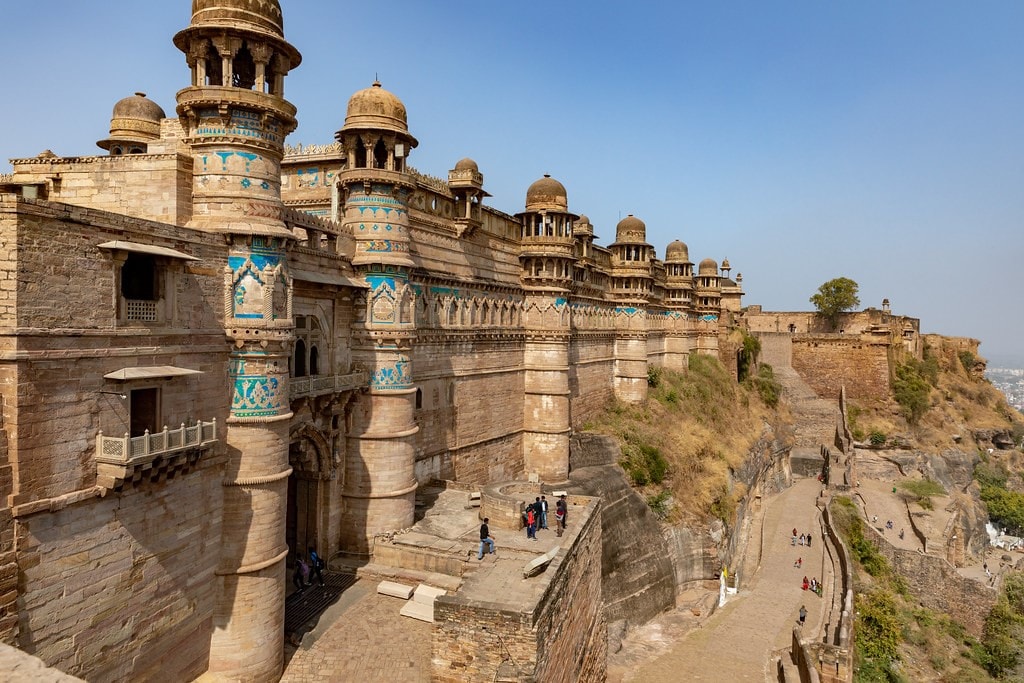 Whether you are a fan of hill forts or a history buff in general, this astonishing fort structure in Gwalior, Madhya Pradesh is sure to steal your heart. Although the exact history behind the construction of this fort is unknown, local legends suggest that it was built back in 3rd century CE by a ruler named Suraj Sen in dedication to Gwalipa, the sage who cured him of leprosy. Believed to be one of the most impenetrable forts in the nation, the Gwalior Fort is undoubtedly one of the top historical places in Madhya Pradesh for you to see. 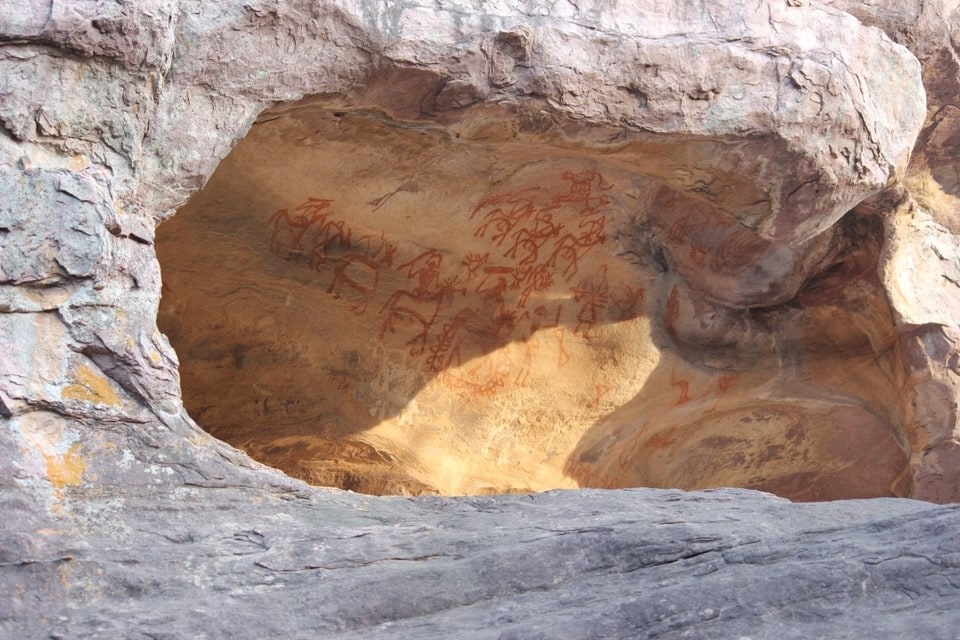 An important archaeological site located 45 kilometres southeast of Bhopal in the Raisen district, the Rock Shelters of Bhimbetka are among the must-visit historical places in Madhya Pradesh. Displaying a collection of nearly 700 rock shelters and wall paintings spanning the Palaeolithic and Mesolithic stone ages, the Bhimbetka rock shelters depict one of the earliest traces of human settlement in India. Where some of the paintings that feature different aspects of human life are believed to be around 30,000 years old, some rock caves date back to a time 100,000 years ago.

As one of the largest prehistoric complexes exhibiting the oldest known rock art on the subcontinent, the Bhimbetka rock shelters are like a dream come true for archaeologists and historians. 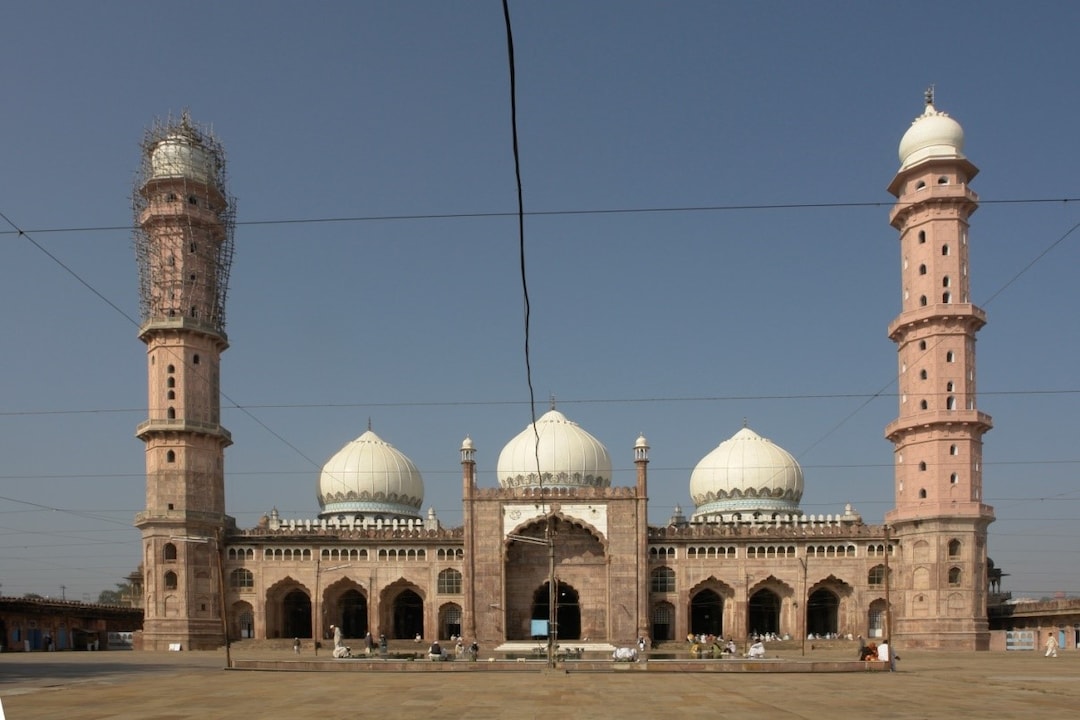 Famous as the largest mosque in the country, Taj-Ul-Masjid in Bhopal is another historical place of interest in Madhya Pradesh that tourists must go to. Its name literally translates to the “Crown of Mosques”, and this mosque is one of the best specimens of Mughal architecture and craftsmanship in central India.

The construction of the mosque is believed to have started in the 19th century during the reign of Mughal Emperor Bahadur Shah Zafar. Taj-Ul-Masjid comprises of 18-storied octagonal minarets topped by marble domes. The attractive pillars, marble flooring, and the main hallway within the mosque resemble that of other remarkable Mughal structures like the Jama Masjid in Delhi. The mosque is so massive that it can house as many as 1,75,000 people at any given time. Situated at the side of Rudra Sagar Lake, in the holy city of Ujjain, the Mahakaleshwar Temple is among the prime religious and historical places in MP. As one of the 12 Jyotirlingas in the country, it is also one of the most visited places in Madhya Pradesh by both tourists and locals.

Dedicated to Lord Shiva, the Mahakaleshwar temple is the only Jyotirlinga that faces the south. Referred to as Dakshinamurti, the lingam form of Lord Shiva is believed to be Swayambhu, meaning one that derives power from within. The Lingam here has not been invested with power using mantra-shakti.

The temple has five levels, of which one is underground. The original temple had been destroyed during the raid of Iltutmish in the 13th century. The present structure was constructed by Maratha general Ranoji Scindia. Another well-known historical monument in Madhya Pradesh, the Bhojeshwar Temple is dedicated to Lord Shiva. The temple structure stands atop a hillock overlooking the village of Bhojpur. What makes this temple both popular and unique is that its construction was left incomplete. The architectural plans of the temple can be found engraved on the rocks nearby.

Supposed to have been constructed in the 11th century, the Bhojeshwar temple houses a 7.5 feet tall linga in the sanctum. The area around the temple once had three dams and a reservoir, which suggests that the Shiva temple could have been constructed by a powerful ruler. The Archaeological Survey of India has deemed the temple structure a “Monument of National Importance”. Located in the town of Mandu, Jama Masjid is another historical tourist place in Madhya Pradesh that you should not miss out on. This mosque is a significant point of interest especially with respect to its history, culture, and spirituality.

Built during the reign of Hoshang Shah, the mosque reflects the Mughal style of architecture. The construction of Jama Masjid was completed in 1454 when Mahmud Khilji was the ruler. The mosque spreads over an area of 950 square feet. An inscription on the doorway to the porch explains that the Jama Masjid has actually been modelled on the Mosque of Damascus, Syria.

Given the wide number of historical monuments that Madhya Pradesh is blessed with, the state has actually become a cultural hub attracting visitors all year round. We have listed down some of the top historical places in MP for you because we want you to see them in person. So, don’t forget to include them in your MP tour itinerary.