While there are plenty of places to visit in Mysore, especially the Mysore Palace that forms an important part of Mysore sightseeing, you’ll be surprised to know that there are many beautiful places to visit near Mysore as well. A healthy concoction of remarkable structures, trekking spots, wildlife sanctuaries, and captivating natural beauty, the places surrounding Mysore are lovely attractions in themselves. From the misty land of hills, Coorg, to the awe-inspiring hill station of Ooty, there are many fascinating places to visit near Mysore.

Here’s a handy list of tourist places near Mysore within 300 km which will give you the options you need: – 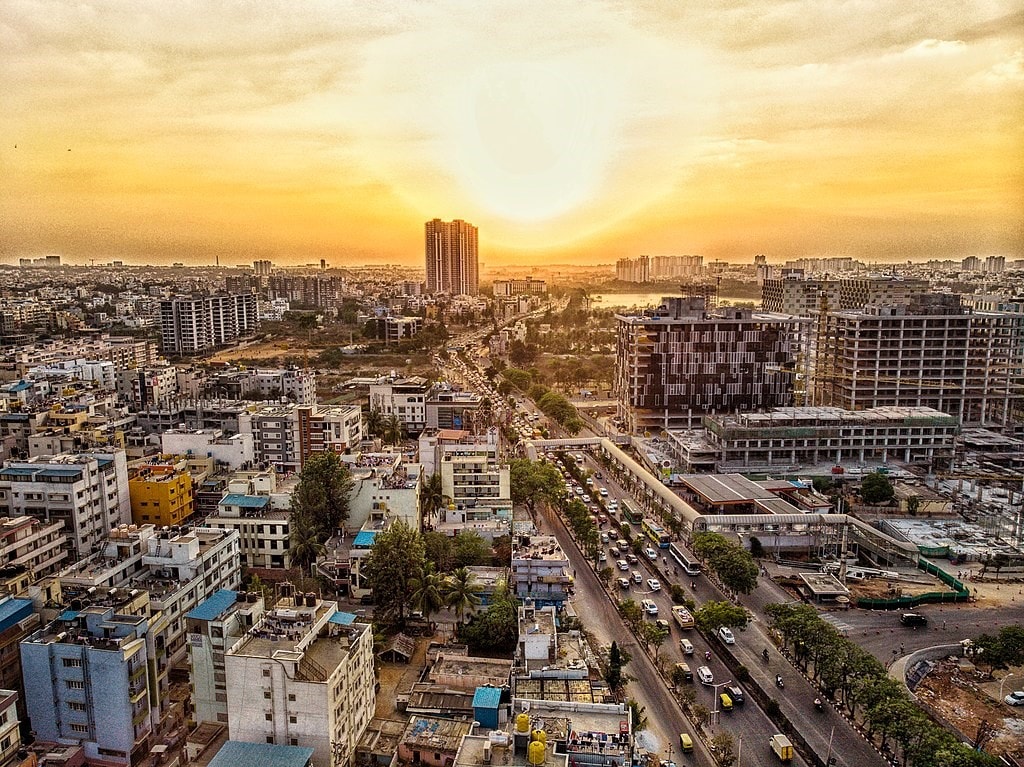 Situated in South India on the Deccan Plateau, the city of Bengaluru is one of the best places to visit near Mysore. Upon entering the city, you can almost instantly see a blend of modernity and traditions. Because of it being an IT development hub in India, it is often called the ‘Silicon Valley.’

Bengaluru has seen an upsurge in its café culture and is the perfect place to go pub-hopping with your pals. But that’s not it; the lush green space surrounding Bangalore is home to wildlife sanctuaries, brooks, waterfalls, and rivers. The Cubbon Park, Bugle Rock Park, Ulsoor Lake, and Indira Gandhi Musical Fountain Park are some of the places that you should definitely visit on your Bengaluru trip. The city also houses many picturesque locations which welcome adrenaline junkies with options for hiking and trekking. One can head to Savandurga, Nandi Hills, Narayanagiri, and Ramanagara for the same. Waking up to the mesmerising scent of coffee and gawking at the idyllic beauty of hills; sounds fascinating, doesn’t it? If you wish to have such an enriching experience, head to Coorg, a stunning hill station in Karnataka. Famously known as the Scotland of India, Coorg is situated along the Western Ghats. The ravishing beauty of this gorgeous land of hills grips your attention almost instantly. It is one of those places near Mysore that is perfect for planning weekend getaways with your family or friends.

From gawking at the unspoilt beauty of nature or taking up a challenging trek, Coorg provides the perfect set-up for a quintessential vacation. The waterfalls, mountains, and captivating view of flora and fauna make Coorg one of the best places near Mysore. Make sure you visit the mesmerising Abbey Falls and Raja’s Seat while you are in this hill station. Abbey Falls offers a delightful view to its visitors. On the other hand, Raja’s Seat is a beautiful garden with charming flowering plants and alluring artificial fountains that you must check out.

To make the best of Coorg, go for a Coorg tour package which comes with a pre-planned itinerary and lets you concentrate on having fun on your trip. 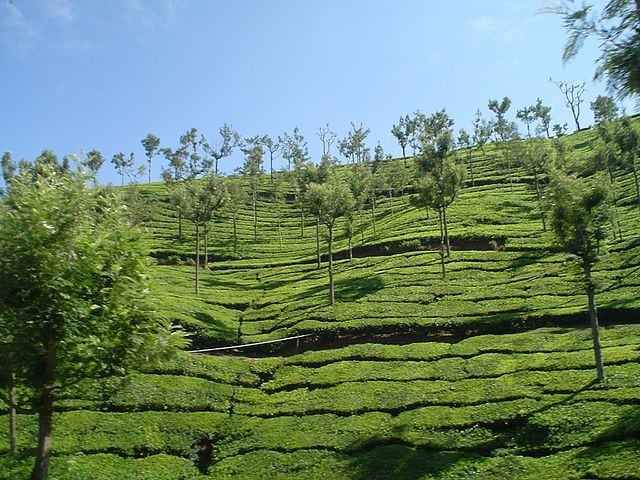 One of the most exciting places to see near Mysore, Ooty is a mountain lover’s paradise. In fact, many travellers take Ooty tour packages to unwind and have a relaxing time. Perched amidst the Nilgiri hills, the region offers a favourable climate during all times in a year. Be it the tranquil waterfalls, the tea gardens, or the local culture of the place, all seem to cast a spell on every traveller. While in Ooty, do not forget to take a trip on the Toy Train that offers panoramic views of the beautiful hill station.

If you have been searching for the best places near Mysore for the weekend, Ooty can definitely be your go-to destination. Whether it is walking on winding lanes or gazing endlessly at the fascinating architecture, Ooty provides the perfect setup for a laid back time in Tamil Nadu.

Chikmagalur is located on the Mullayangiri Range foothills and is an awe-inspiring hill station nestled in Karnataka. Home to several coffee plantations, this hill station always has an enchanting scent of coffee in the air. Popular for its lush green forests, tall mountains, and peaceful environment, Chikmagalur is, without a doubt, one of the best places to visit near Mysore.

A treasure trove with many trekking trails for trek enthusiasts and a magnet for nature lovers and coffee enthusiasts, holidaying here is quite the experience. So, after you finish Mysore sightseeing, you can plan the trip to Chikmagalur to sit in the lap of nature for hours at a stretch. 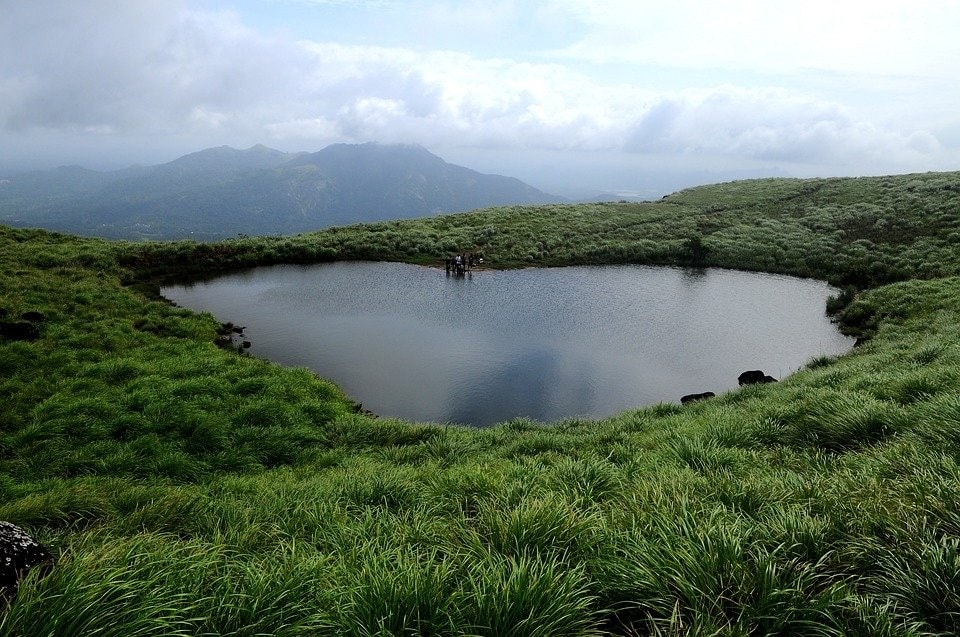 One of the most exciting places to visit near Mysore, Wayanad is known to offer soothing temperatures throughout the year. Situated in the Indian state of Kerala, it houses misty mountains, plantations, gushing rivers, and dense woods. It also has vast orchards of different spices such as star anise, black pepper, cardamom, black cumin, fenugreek, and much more. The scent gets even better because of the presence of aromatic coffee plantations.

When you plan a trip to Wayanad, do visit the Banasura Sagar Dam, one of its major attractions. Wayanad is also a hub for rappelling, rock climbing, mountaineering, hiking, and various other adventurous activities. You will even find some great examples of old architecture in Wayanad like Karinthandan Temple, Ancient Jain Temple, Thirunelli Temple, and many others. So, do make a pit stop at Wayanad after concluding your Mysore sightseeing trip. Srirangapatna is a tiny island town in the Cauvery River. The town is one of the best places nearby Mysore that you can plan on visiting. The Ranganathaswamy temple which is dedicated to Lord Vishnu is one of the most crucial Vaishnavite centres of pilgrimage in town. Along with housing many interesting monuments, Srirangapatna has an abundance of scenic beauty too. There are many breathtaking waterfalls awaiting you in this town. You also find tombs, palaces, temples, and military warehouses here too. If you have time on your watch, you can also visit the Ranaganthittu Bird Sanctuary that is home to different bird species. All in all, Srirangapatna is one of those places nearby Mysore which is well worth the visit. 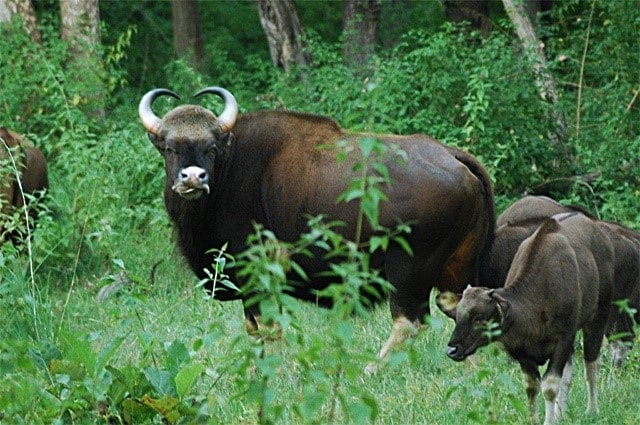 Located in Karnataka, Bandipur National Park served as the hunting grounds of Mysore’s Maharaja once. At a later stage, it was established as a reserve under Project Tiger. With this, the park became a famous tourist place near Mysore. Housing deciduous forests with rich wildlife, the national park appeals to both wildlife enthusiasts and nature lovers. The park is home to many endangered species such as hornbills, pythons, deer, sloth bears, elephants, panthers, etc. A large number of beautiful sandalwood and teak trees in this national park is a sight for the sore eyes. It is one of the tourist places near Mysore which is within 150 km. So, you can definitely consider visiting it for a short but fulfilling trip after you are done exploring Mysore sightseeing places. 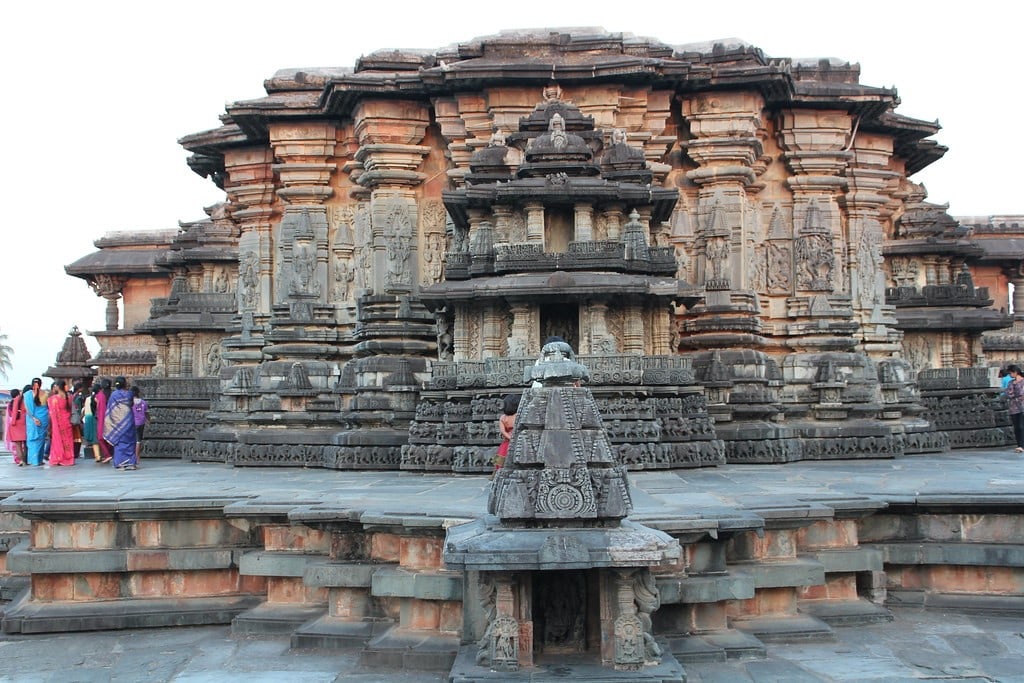 One of the best places to visit near Mysore, Belur is known for preserving its medieval architecture style. It is a tiny town set in Karnataka and a great place to visit in the winters. Tourist places such as Kedareshwara temple and Chennakesava Temple are a must-visit here. The Chennakesava Temple portrays the fine craftsmanship of Hoysala architecture style, something that you will really find intriguing upon your visit to Belur. Shravanabelagola is widely popular for its massive monolithic stone statue of Gomateshvara. Perched on the top of Vindhyagiri Hill, the Jain deity’s statue can be spotted from everywhere in Shravanabelagola. Being a major centre for Jains in southern India and one of the most fascinating places to visit near Mysore, the place is home to many temples. Shantinatha Basadi, Akkana Basadi, Kattlae Basadi, Chandraprabha Basadi, and Parshwanatha Basadi are some of the temples you will find here. The major attractions of Shravanabelagola include Indragiri, Chandragiri, Jinanathapura, and Bhattaraka Math. 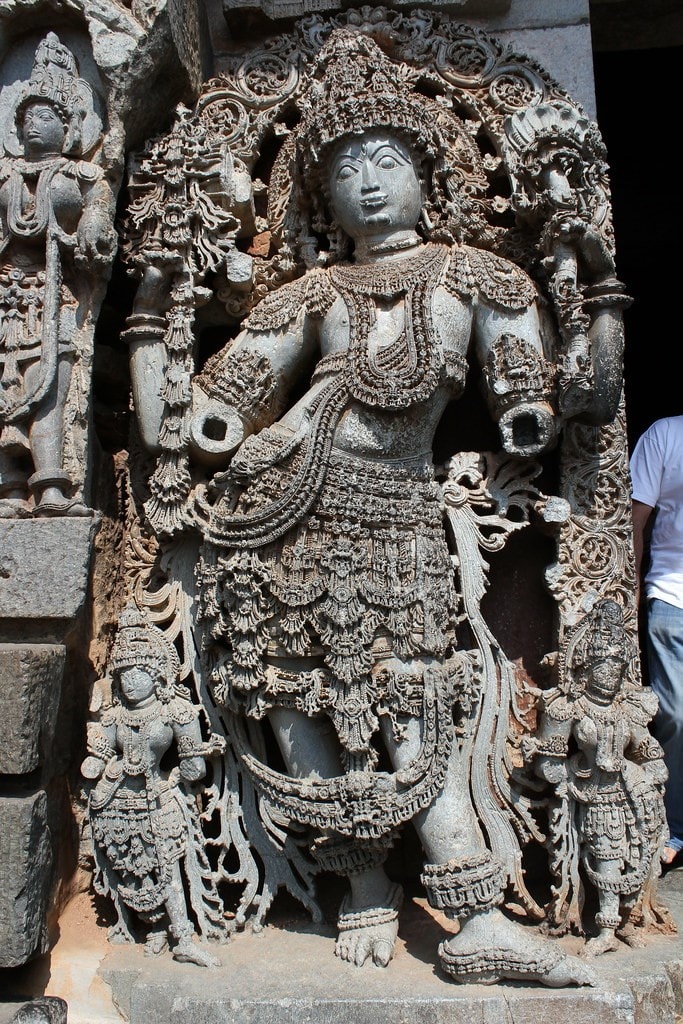 Halebidu is one of those offbeat tourist places to visit near Mysore. Its main attraction is the Hoysaleswara Temple. Apart from this temple, one can visit the Kedareswara temple and Shantaleswara temple. Other popular attractions include Yagachi Dam and Basadi Halli. The city has immense historical significance which attracts history buffs from different parts of the country and is an interesting tourist place near Mysore that you must check out. 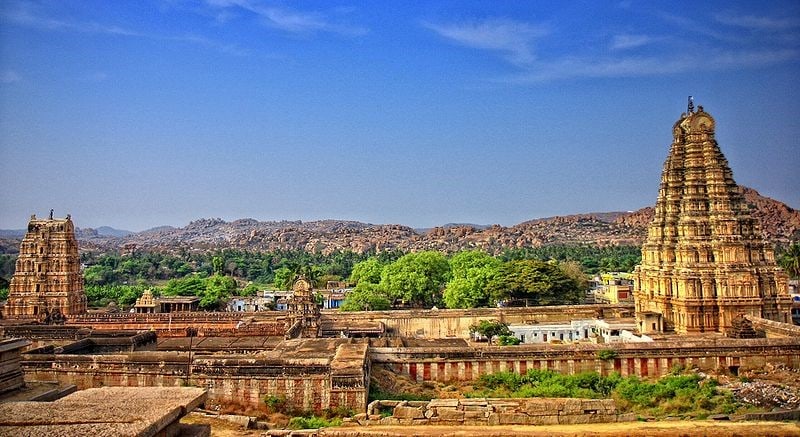 Situated in the state of Karnataka and 406 km from Mysore, Hampi is one of the most interesting places to see near Mysore. It is the city of ruins which serves as a historical delight for visitors. Encircled by stunning temples, busy street markets, old monuments, and remains of the Vijayanagar Empire, Hampi is situated on the banks of Tungabhadra River. So, when you are done exploring the places extremely nearby Mysore, Hampi is the city you can head to.

The city is an open museum with numerous locations for the travellers to see and explore. The ruins of temples and various other structures can be seen spanning a massive area. Popular for its huge, attractively carved temples, Hampi is particularly famous for its Virupaksha Temple that you must visit during your trip. You will also find the remains of canals, stables, military barracks, and old aqueducts here. While planning your trip to Hampi, having a pre-planned itinerary is the right way to go about it. Therefore, opting for a Hampi tour package is hands down the best way to discover the city of ruins.

When you set to explore the places nearby Mysore, you truly are in for a wonderful surprise. What’s more, there are several short tour packages on offer that help you break the monotony as you have the perfect weekend getaway!