Formerly known as the region of Uttaranchal, Uttarakhand is one of the most picturesque and beautiful states in India. Located among the foothills of the great Himalayan range, Uttarakhand is truly a vivid experience. With a great number of amazing tourist places in Uttarakhand, the region has something to offer for everybody. It is a hub for religion, culture, and art in the northern part of India and has over the years become an important contributor to the whole Himalayan experience.

The territories of Uttarakhand vastly vary, and myriad experiences can be obtained in this land of gods. The region is dotted with temples and ashrams across various major cities like Rishikesh, Haridwar, and so on, which are some of the well-known places to visit in Uttarakhand. The state also houses some of the most important pilgrimage sites for the Hindu faith, such as the Kedarnath Temple and the Badrinath Temple. Many Uttarakhand tour packages are booked solely for religious tourism, as these temples are some of the most popular places to visit in Uttarakhand.

Here are a few destinations that you must visit on your trip to the Devbhoomi, Uttarakhand: –

Located in the foothills of the mighty Himalayas, and one of the best tourist places in Uttarakhand, Rishikesh is where the holy river Ganga and the river Chandrabhaga meet. The town of Rishikesh is surrounded by the lush plains of Uttarakhand and is an oasis of spirituality in the region. It is one of the best places to visit in Uttarakhand and is a destination you should include in your Uttarakhand tour itinerary if you’re looking for a calming and adventurous trip at the same time. The town is renowned for the experience of spirituality it offers and it has tourists visiting throughout the year from all across the world seeking spiritual guidance. This little town situated on the banks of Ganga is often also referred to as the “Yoga Capital of the World”. Although Rishikesh has always been a holy site for people of the Hindu faith, it was popularized as a tourist destination over the past few decades.

During the late ‘60s the legendary musicians, the Beatles, visited this serene town and there was no going back from that point onwards. Today, the town is one of the most famous tourist places in Uttarakhand and offers plenty of experiences and activities for all kinds of people to enjoy. It has also become a hub for adventure sports like rafting, rock climbing, and so on.

One could visit the numerous temples and ashrams during their stay or visit the great Lakshman Jhula or even indulge in adrenaline-pumping sports like white water river rafting. The town is a great mix of activities that can be enjoyed by people with varied interests. 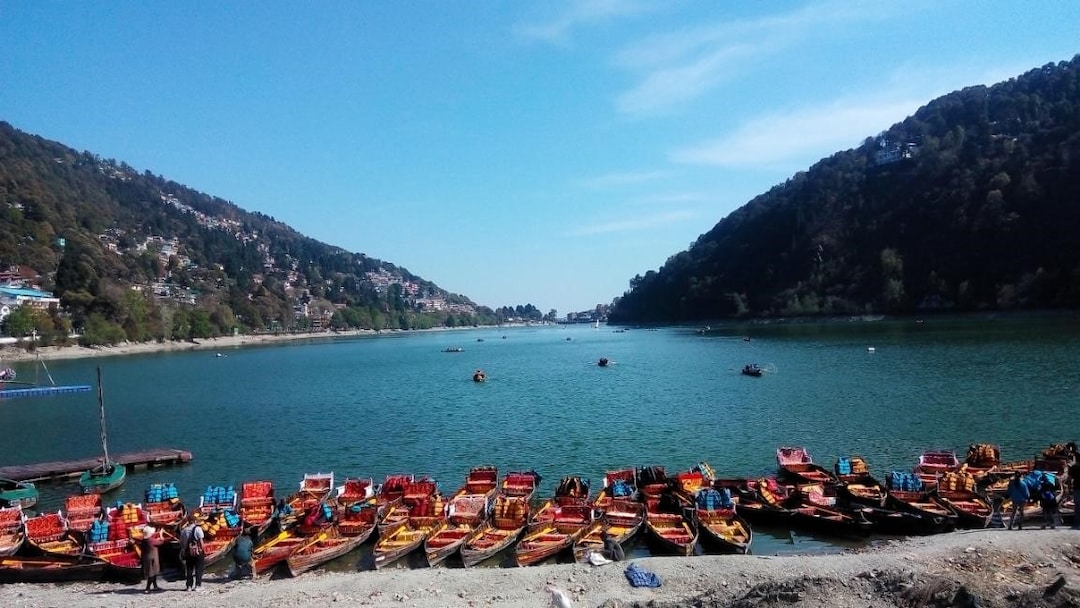 The marvellous hill station of Nainital, nestled in the foothills of the Kumaon Range is one of the most prominent tourist spots in Uttarakhand. The town is built around the shimmering waters of the Naini Lake and is everything one desires in a hill station.

Since the colonial era, this small town has been famous for its splendid weather and breath-taking views. Even today, several British colonial structures can be found here, which add to the beauty of this city of lakes.

If one is looking for a calm getaway that can be enjoyed with friends and family alike, Nainital is one of the best tourist places in Uttarakhand. Nainital can be your primary destination to visit among other tourist attractions in Uttarakhand owing to its easy accessibility and wonderful weather throughout the year.

The shimmering waters of Naini Lake as it turns golden during the early hours of the morning are a sight to behold and cherish. Several activities such as boating and angling can be enjoyed at the lake, and you could also add a visit to the snow-view point to your Uttarakhand itinerary to experience the views of the breath-taking Himalayas on the horizon.

You could indulge in the local cuisine and try some dishes like the Phaanu or Badi, or you could shop for handicrafts and novelty items at the local market called Mall Road.

This hill station welcomes thousands of tourists each year; after all, Nainital is one of the must-add destinations for any Uttarakhand tour itinerary. Mussoorie is by far one of the most famous tourist places in Uttarakhand. The picturesque hill station is like a trip to the British past of India. Serene hills and sprawling landscapes surround you when you’re in Mussoorie. The hill station is full of pristine natural beauty and a welcoming sweater-weather throughout the year.

The town has been an escape from the hot plains of the country for several decades since the British colonial era, which is showcased in the plethora of British architecture that can still be found here.

Mussoorie is great for family retreats and is a popular destination in any Uttarakhand tour itinerary. Mussoorie is also one of the most renowned tourist places in Uttarakhand for the sightseeing it has to offer.

The Mall Road at Mussoorie has several eateries offering local food and shops selling handicraft items, along with many cafés and restaurants to unwind at.

The hill station is simple and relaxing. Adding Mussoorie to your Uttarakhand tour itinerary gives you the opportunity to kick back and relax as you are enveloped by the wafts of cool wind that cradle this town.

The hill station enjoys pleasant weather throughout most of the year, except for the monsoons. Monsoon may also have landslides in the region, thus a visit during the monsoon is best avoided. The best weather to visit the rustic hill station, however, is during September and June when the climate is moderate, and most activities and destinations can be enjoyed thoroughly. Located between Nar and Narayan mountain ranges and perched among the peaks, Badrinath Temple looks like nothing short of heaven and it is definitely worth adding the temple to your Uttarakhand itinerary.

The temple idol is 1 meter tall and jet black in colour, and is believed to have been established by the great Yogi Adi Shankaracharya.

The Badrinath Temple is a monument of legendary proportions and has found mention in several Hindu texts, including the Vedas.

Due to its significance as a pilgrimage spot for the people of the Hindu faith, the temple is easily accessible via roads; although, during the winter season, the snowfall in the region leads to the temple being shut during the extremely cold weather.

Devotees and pilgrims each year flock to this legendary temple to relish the raw beauty of the great Himalayan peaks. Thus, the temple of Badrinath is one of the most popular religious tourist places in Uttarakhand.

Along with being a destination of great religious importance, Badrinath is also a prime example of the Uttarakhand sightseeing experience with snow-clad mountains and valleys that stretch across the horizon. 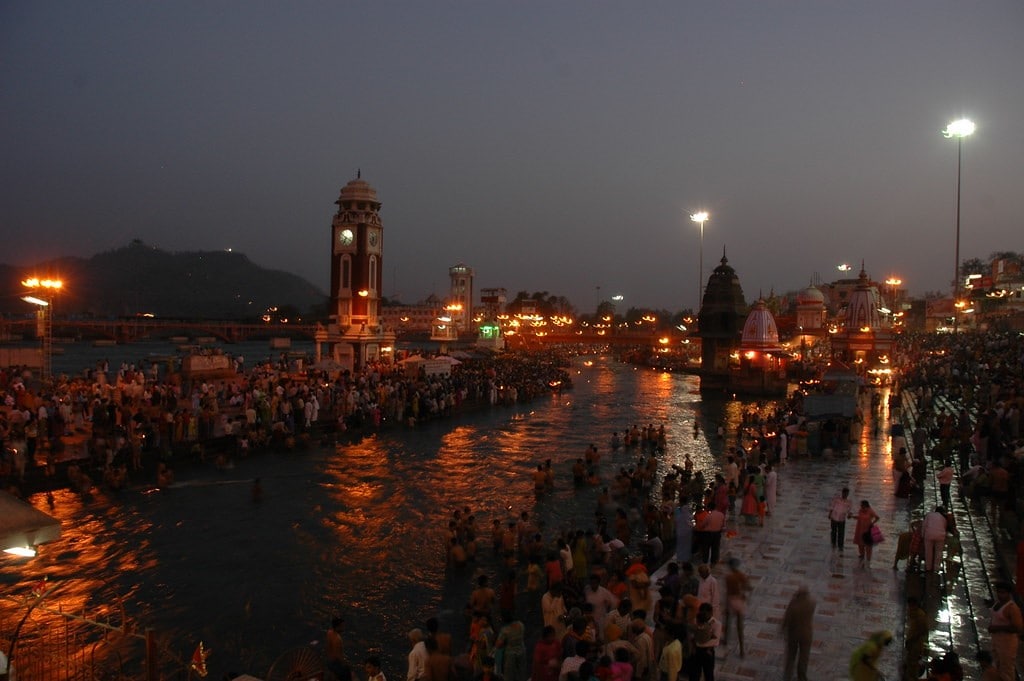 Haridwar, literally meaning “the Gate to Heaven”, is a town located on the banks of the holy river Ganga. The town, one of the popular places to visit in Uttarakhand, is located in the plains of Gharwal and has been around since ancient times. Haridwar is regarded as one of the 7 holiest cities in India and is dotted with temples and ashrams. Famous as a temple town, Haridwar is flooded with devotees and pilgrims throughout the year. Every evening, the grand Ganga Aarti is conducted en masse, where thousands of devotees gather at the site to worship the holy river.

Haridwar is also one of the most famous tourist places in Uttarakhand as being the site of the Kumbh Mela. The Maha Kumbh Mela is a festival of epic proportions which is celebrated in the town of Haridwar every 12 years. Millions of people attend this great festival and the people from all across the globe visit Haridwar during this season.

Apart from being an epicentre for Hinduism, Haridwar is easily connected to all parts of Uttarakhand, making it the perfect stopover destination on your Uttarakhand sightseeing journey. The town is also famous as a centre of culture and spirituality with the countless ashrams and famed yogis imparting their knowledge.

The weather in Haridwar is pleasant during most of the year, but the summers tend to be hot and humid. The bets months to visit Haridwar are from October to February, when the climate is moderate, and the outdoors can be enjoyed. The Jim Corbett National Park is a gem in the wildlife preservation effort of India. The park was established in the year 1936 and is the oldest national park in the country. also It is home to the critically endangered Royal Bengal Tigers. Since its establishment as Hailey National Park, the region has been at the forefront of nature conservation and efforts of the Indian Forest Ministry.

Located in the foothills of the Gharwali Himalayas, the national park is home to a great number of wildlife species, some of which are unique to the national park. Situated at the banks of the river Ramaganga, the national park supports over 480 species of flora and fauna and is spread across a region of 500 square kilometres.

The national park is an exemplary destination to fully experience the wildlife diversity of India. The park itself is spread across woods, marshland, and mountains.

Things to do in Corbett include visiting the deepest part of the reserve via jungle safari, bird watching to spot rare species of various bird types, river rafting in the clear streams that flow through the park, and taking an elephant ride across the open fields.

Accommodation inside the national park is available at 3 locations, all of which are equally beautiful and comfortable to stay. The jungle safari is the highlight of the Jim Corbett experience, and if you’re lucky enough, you might just spot the elusive Royal Bengal Tiger.

Although the weather in Jim Corbett National Park is pleasant throughout the year, the best weather to visit the reserve is during November to February. Summer can be avoided, as the climate turns excessively humid at that time. 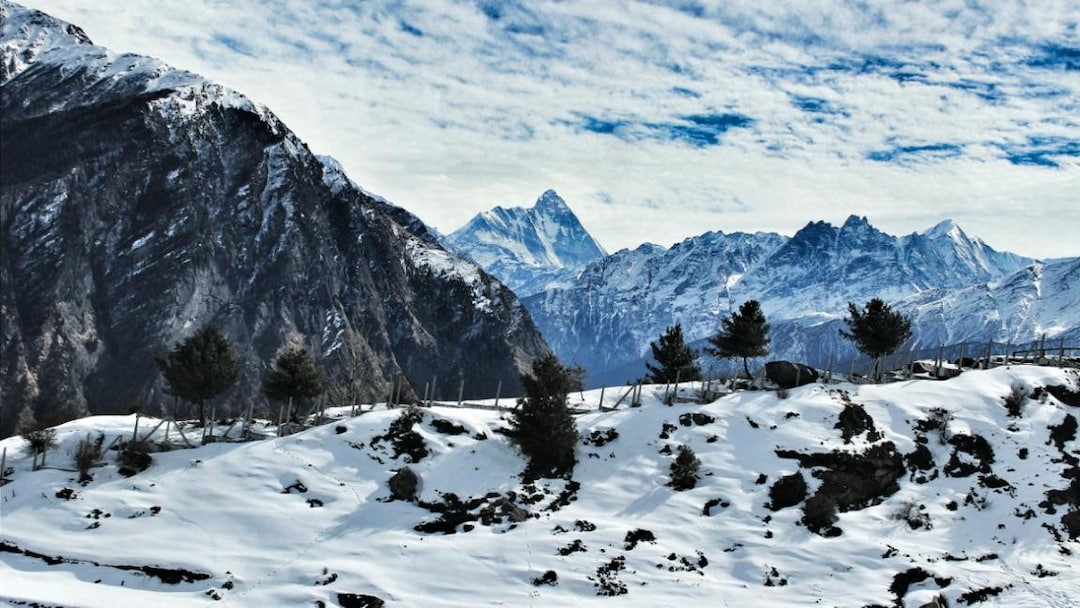 Auli is a prime location for the skiing enthusiasts in India. The town is located among the high hills of the Himalayas in Uttarakhand. The town is perfect for Uttarakhand sightseeing due to the gleaming slopes clad with snow and the open and clear skies that you can glimpse here. The town enjoys a clean sheet of snow each year, that adorns the town in shimmering white.

One could easily mix up Auli with a splendid skiing resort from the Swiss Alps, as the town perches among mountains such as Nanda Devi, Mana Parvat, and Kamat Kamet and offers breath-taking views of vivid landscapes.

During the British Colonial period, Auli was a ski resort held in high regard by the Britishers. Even today the town enjoys a great number of skiers each year, making it the most famous skiing tourist spot in Uttarakhand.

Apart from skiing, adventure seekers can also enjoy trekking and hiking in this hilly paradise to make the best of the spellbinding views that stretch across the horizon.

The weather in Auli is pleasant and enjoyable throughout the year, but the best time to visit the hill station would be during the months of December to February. It is also during these months that most skiing activities are carried out.

Known as the land of the gods and breath-taking views, Uttarakhand is a destination that everybody can enjoy. It has something in store for the adventure seekers and the devotional, while is also great for travellers seeking leisure time. Countless destinations lie in this wonderful land of mountains and valleys for one to have the time of their life!