The Top 10 Things You Have To Do When In New York | Veena World
Reading Time: 6 minutes

New York City may not be the capital of the country, but it sure is one of the most important cities in the United States of America! It is said to be the ‘city that never sleeps’ for a reason. No matter where you head, there are so many amazing things to do in New York that making a choice will never be difficult. Whether you are in the city to visit some friends or family or you are here on holiday on a New York tour package, it is always a good idea if you plan out your itinerary in advance. If you ask us, the mere thought of missing out on any of the must-do things in New York leaves us bemused. So, to help you along with the best activities to try out, here is a list of the top 10 things to do in New York that you can pick and choose from: – 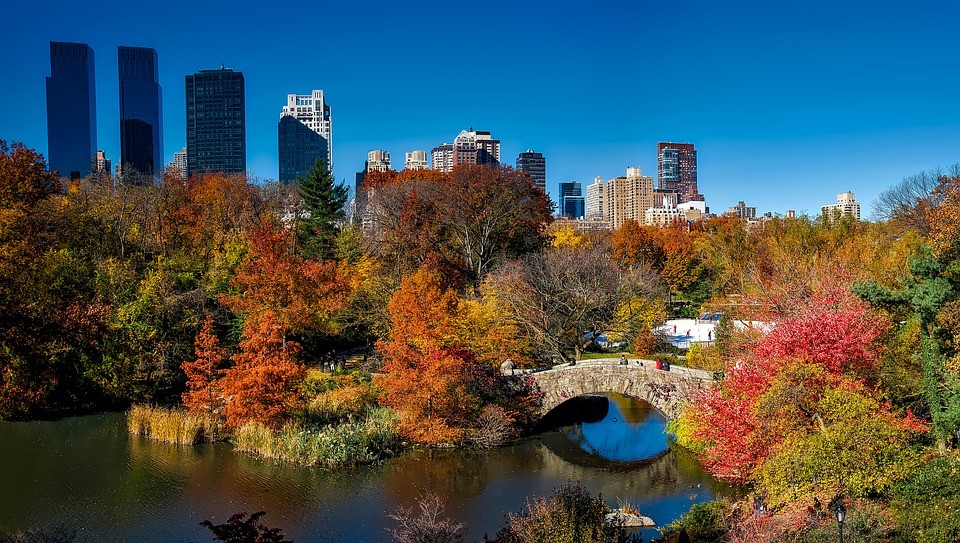 It was decided that right in the middle of Manhattan’s grid system, a giant strip would be cut out from 5th Avenue to 8th Avenue and from 59th Street to 110th Street, to give the city some extra greenery. Covering about 843 acres, the Central Park of New York was born, including within its boundaries, a concoction of some ponds, a central lake, and reservoir. The park also has public art, almost 50 fountains, sports facilities, schist outcrops, and some well-known landmarks like the Bethesda Terrace.

Your New York trip wouldn’t feel without visiting this place; after all, a picnic in Central Park is one of the most popular things to do in New York. When in Central Park, you can visit the zoo, outdoor theatre, horse-drawn carriage tours, and go boating. Times Square is a bowtie shaped plaza in New York where Broadway meets Seventh Avenue. While it may not sound like much, but walking through Times Square, simply gazing at the billboards is one of the most amazing things to do in New York. On a busy day, as many as 500,000 people pass through the area and up to a million people show up just to watch the New Year ball drop at Times Square, a tradition that dates back to 1907. Times Square is, without a doubt, a significant piece of New York’s history, and walking the area is still one of the best things to do in New York while you are there.

3. Go to the Top of the Empire State Building King Kong, anyone?! No? Ok, we will abstain from pop culture references.

New York is a huge and sprawling city and if there is one vantage point that lets you see the expanse of the Big Apple, it is the Empire State Building. One of the best things to do in New York, this is an iconic limestone skyscraper that was built in just 410 days. The views from the outdoor deck on the 86th floor and the indoor deck on the 102nd floor are simply magical!

4. Stroll in the Brooklyn Bridge Park 5. Watch the Choreography of Commuters at the Grand Central Terminal 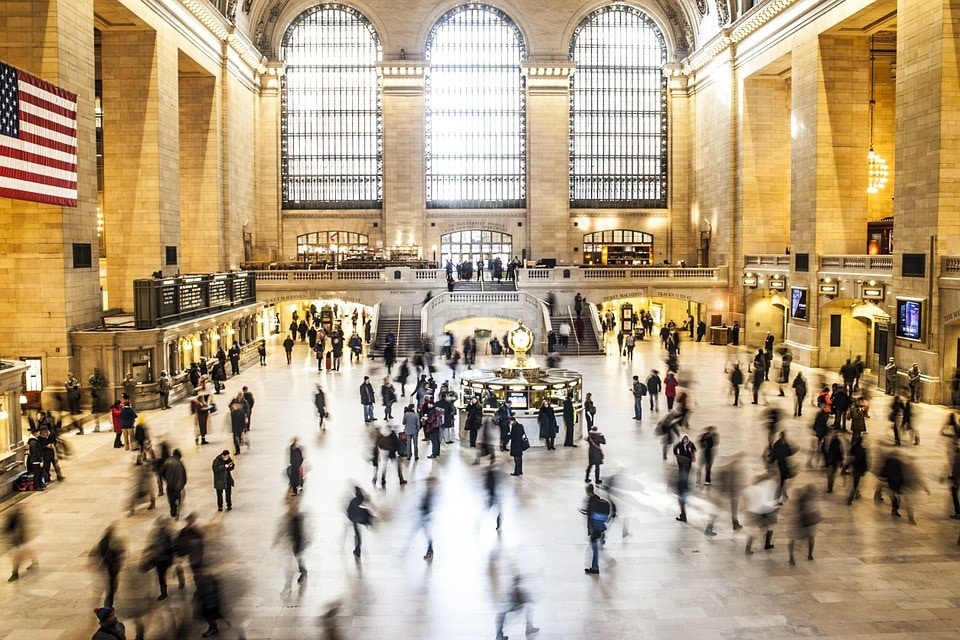 Trust us, it is poetry in motion!

This thing is more about getting the “New York Experience” more than anything else. One of the most common things to do in New York is to take a train from Grand Central, regardless of whether you are a local or a tourist. This is the world’s largest and USA’s busiest station with nearly 700,000 commuters every day. Mind-boggling, right? But that doesn’t take away its sheen as one of the most magnificent public places in New York with glimmering chandeliers and a worth seeing main concourse and a fibre-optic map of the constellations on the ceiling. Avoid the rush hour and a visit to Grand Central may just be one of the best things to do in New York.

6. Have Some Fun at Coney Island 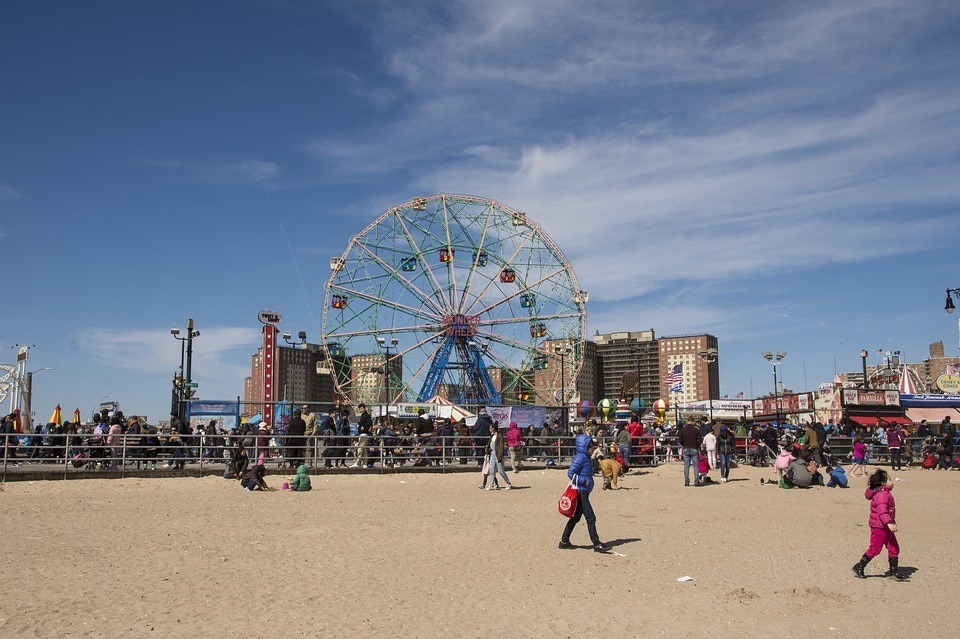 Earlier, Coney Island used to be a seaside resort for the New Yorkers. However, today it has been revitalised as a tourist destination that is counted among the top things to do in New York. The Coney Island Cyclone in Luna Park is one of the oldest functioning rollercoasters (made of wood), which was originally opened in 1927. Another one of the best things to do in New York’s Coney Island is taking a ride on the Wonder Wheel at Deno’s Wonder Wheel Amusement Park which offers some amazing views of Manhattan’s skyline, the beaches in Brooklyn, and of Rockaway Peninsula.

7. Pay Your Respects at the 9/11 Memorial and Museum 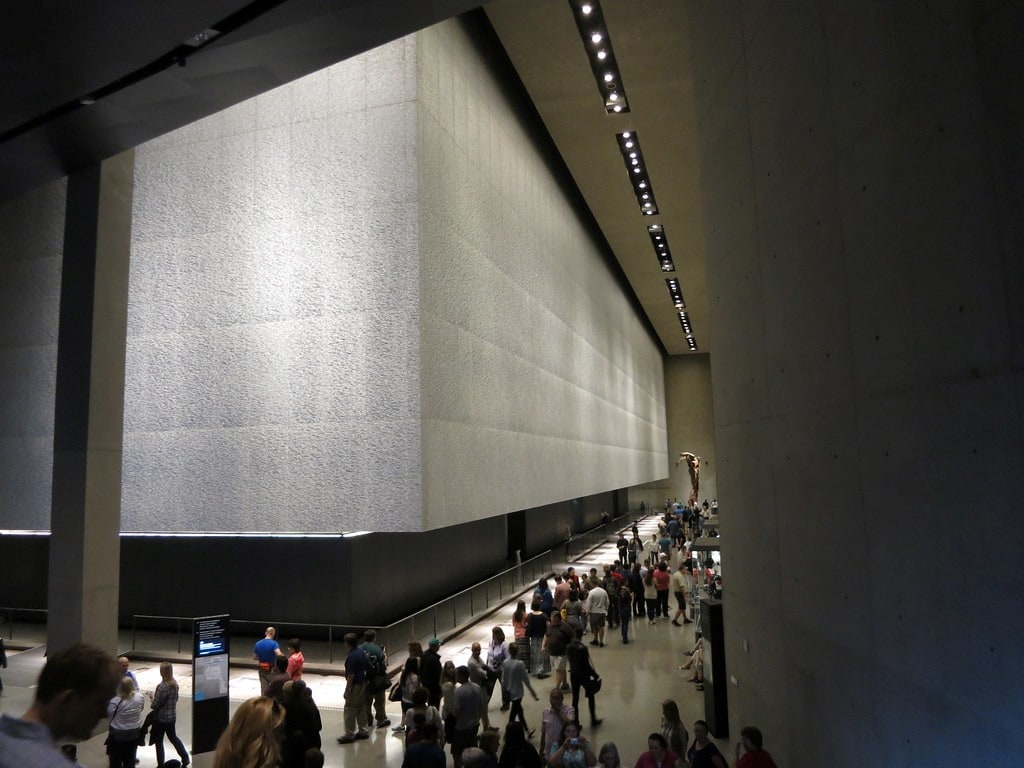 When in the city, you should not miss out on visiting the 9/11 Memorial and Museum. These are 30-foot waterfalls that stand where the Twin Towers once stood. It is said that these are the largest man-made waterfalls in North America. Edging the Memorial pools are bronze panels that are inscribed with the names of the 2,983 people who lost their lives in the World Trade Centre terror attacks, in the crash of Flight 93 in Pennsylvania, and of the six people who died in the 1993 World Trade Centre bombing.

8. Ferry Your Way to the Statue of Liberty 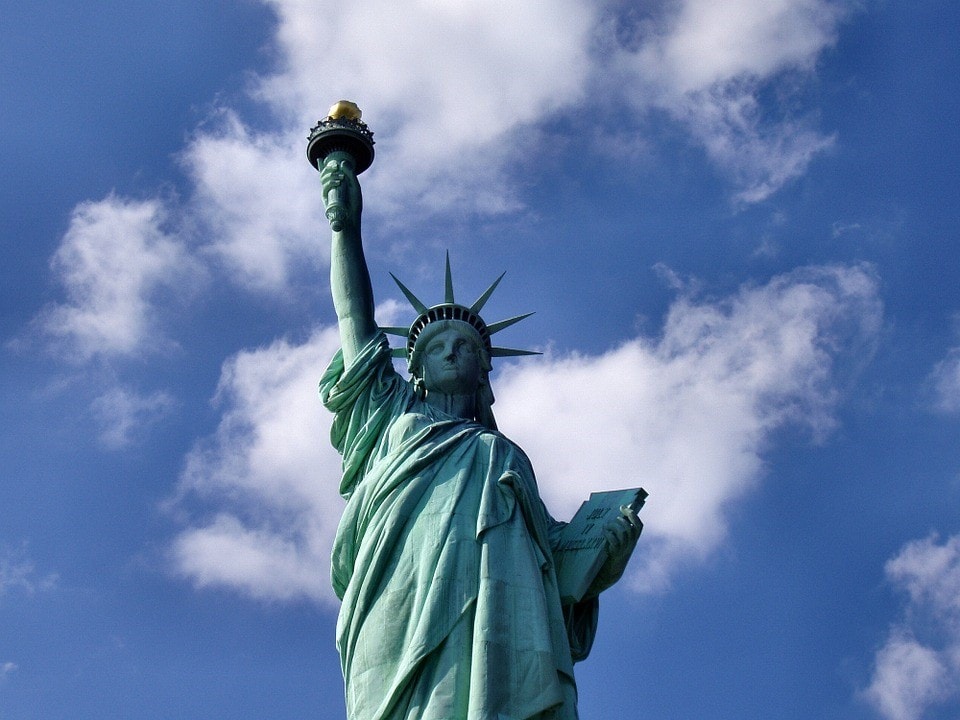 You simply can’t go the Big Apple and skip on one of the top things to do in New York – visiting the Statue of Liberty. Take a ferry from Battery Park and when you are there, make sure you visit Ellis Island National Museum of Immigration as well to get an interesting insight into America’s history.

9. Spend Some Time at the Chrysler Building 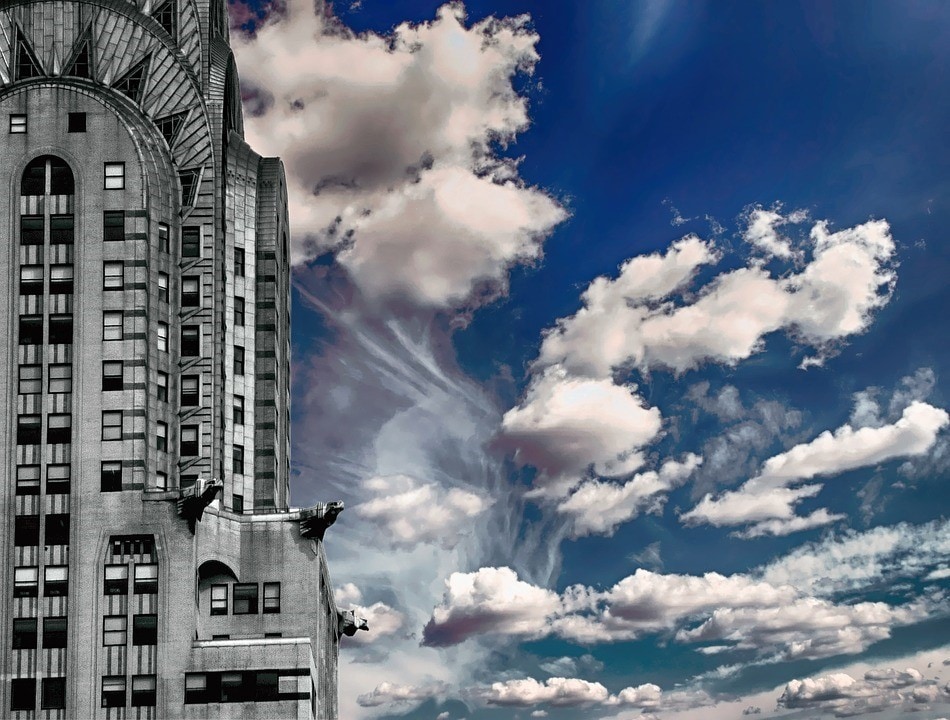 Another one of the best things to do in New York is to visit the Chrysler Building. The 77-floor building is the perfect example of New York’s art deco architecture. The building is guarded by chromium-nickel eagles and is topped by a spire that is reminiscent of the rising sun. The lobby itself is a sight worth beholding for the visitors.

10. Marvel the Marvels at Guggenheim Museum 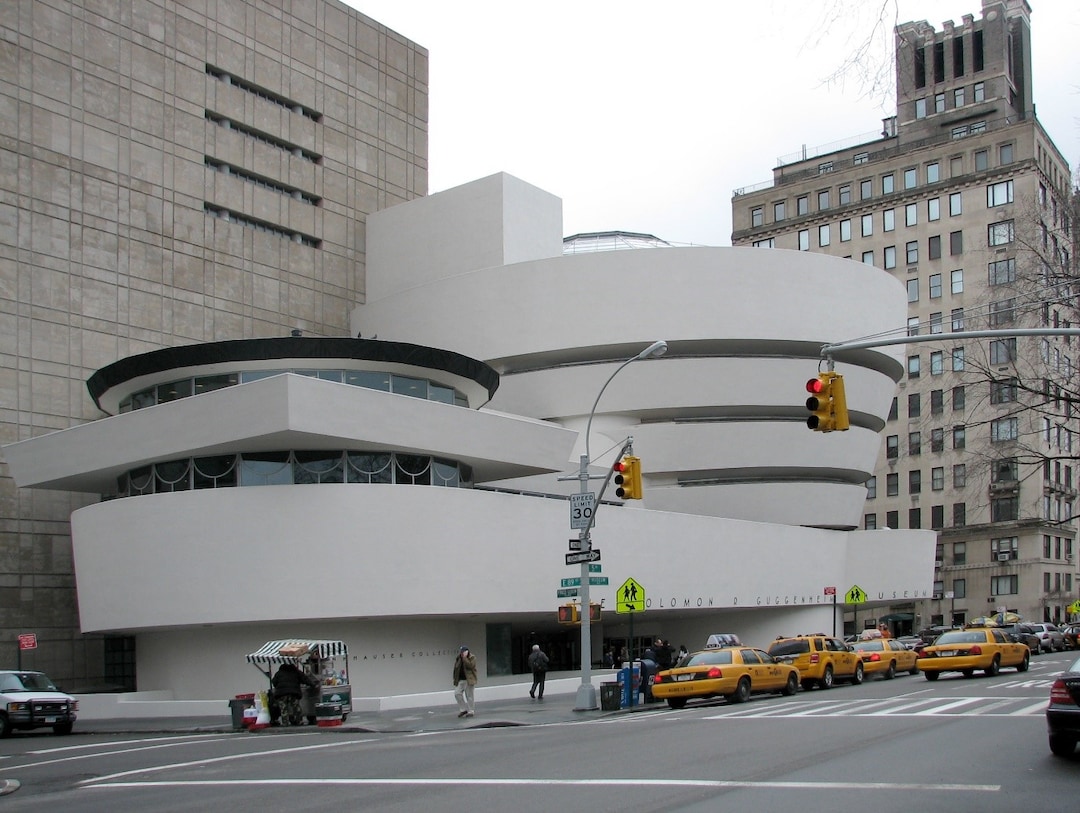 This museum is probably more famous than the artwork it has inside. Shaped like a conical white spiral, it houses works by Pollock, Picasso, Kandinsky, Monet, Degas, Van Gogh, and Mapplethorpe. One for the art connoisseurs!