Landlocked between a couple of other counterparts, Central Asia’s age-old gem – Uzbekistan is a new shining star on the block for new-age travelers. The region is a cradle of culture with its prized possessions of grand architecture, ancient cities and the deeply infused fascinating history of the Silk Road.

But have you ever heard someone say they are planning a trip to Uzbekistan for the winter holidays? Well, it is time to change that because there is a bevy of unique experiences that Uzbekistan is waiting to offer you and take you on a trip of rich culture scape. And with easy visa systems, visiting Uzbekistan from India is all the easier.

Here’s a list of ten ancient tourist places to visit in Uzbekistan:

A symbol of oriental architecture and captivating design, Registan Square of the 14th century got a UNESCO World Heritage tag in 2001. The square is surrounded by grand madrasas, each unique with its own motifs and has always been the centre of social life in Samarkand. Registan, translated from Uzbek, means “sand place” and derives its name from the fact that the square was completely covered in sand in the old times. You can see Uzbekistan’s signature shades of blue and shining gold leaf carvings on the walls of the square in circular patterns.

This ensemble of three grand edifices are among the world’s oldest preserved medressas. The three medressas have taken their knocks over the years, thanks to the earthquakes in the region, but they still stand tall with due credits to their builders and the Soviets for the restoration. The capricious addition of a blue outer dome to the Tilla-Kari Medressa is magnificent and no amount of pictures can do justice to it. On the Western side, you will find the original medressa – The Ulugbek Medressa, finished in 1420 under Ulugbek. The stars on the portal reflect Ulugbek’s love of astronomy. The entrance portal of the Sher Dor (Lion) Medressa, opposite Ulugbek’s is decorated with roaring lions. The final resting place of Timur, and his two sons and two grandsons, this monument is a stunning mausoleum with an azure dome that will leave you in awe of its beauty. Did you know that the tomb also inspired Mughal architecture in India, especially Humayun’s Tomb and the Taj Mahal?

Pro tip: Try to visit this monument at night to look at the illuminated tilework. When you feel you have seen the best architectural beauty in your trip so far to Uzbekistan, hold your breath because the richest tilework is waiting for you at Shah-i-Zinda complex. Yet another venue for stunning mausoleums, Shah-i-Zinda complex means ‘Tomb of the Living King’. The Amir Timur Museum in Tashkent is dedicated to the Mongol conqueror, Timur. It was opened in the capital, Tashkent, in 1996 after the country gained independence. The museum has over 5,000 exhibits artefacts related to Timur and the dynasty that followed him, the Timurid Dynasty. The building itself is meant to resemble the Gur-e Amir mausoleum in Samarkand. 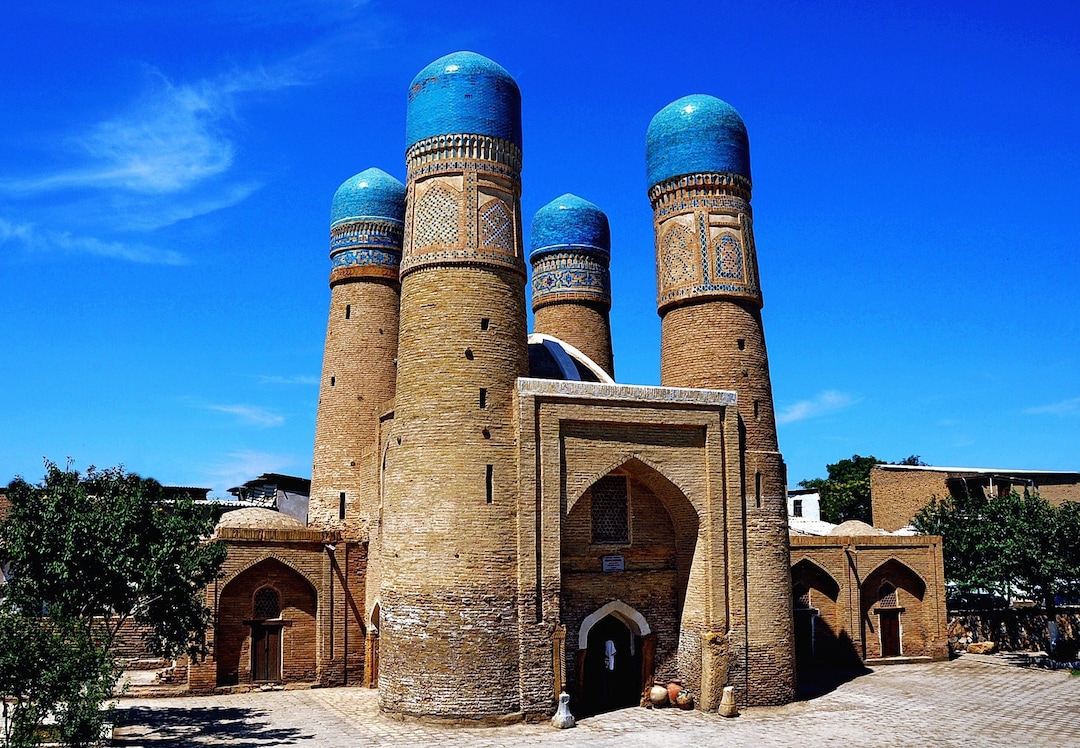 No, don’t confuse this one with the Char Minar of our very own Hyderabad. This historic mosque located to the northeast of Bukhara was built in the 18th century by a rich merchant, Khalif Niyazkul. The four minarets for which the mosque is named (Chor Minor literally means “four minarets”) symbolize the four cardinal points. Photogenic little Chor Minar, in a maze of alleys between Pushkin and Hoja Nurabad, bears more relation to Indian styles than to anything Bukharan. The building, resembling an upside-down chair thrust deep into the ground, is merely the darvazakhana gatehouse of a madrassah. If you view the building from the south you are standing in the madrassah courtyard with its former summer mosque to your left and hauz to your right. The only remains of the madrassah lie crumbling to the sides of the Chor Minor. 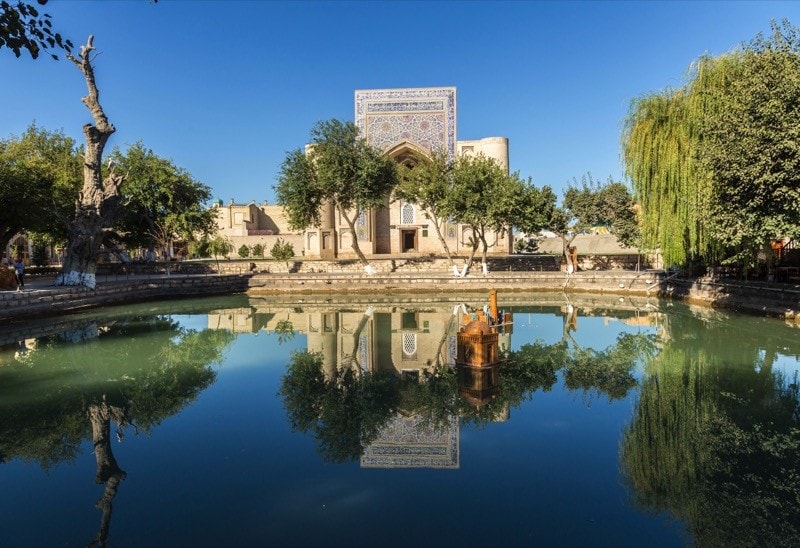 Built in the 1600s, the Lyab-i Hauz is a serene plaza built around one of the few remaining ponds (hauz) in Bukhara. The pond itself is fed by an ancient canal system and is surrounded by beautiful mulberry trees. To the south of the Lyab-i-Hauz lies the historic Jewish Quarter of the city. The ancient city of Khiva, also known as Khorasam, is over 2,000 years old. The walled inner city Itchan Kala, was the first Uzbek site added to the list of UNESCO World Heritage Sites. Encircled by crenellated brick walls, it is full of fascinating places and historic monuments. Entering the walled city is like going back in time. 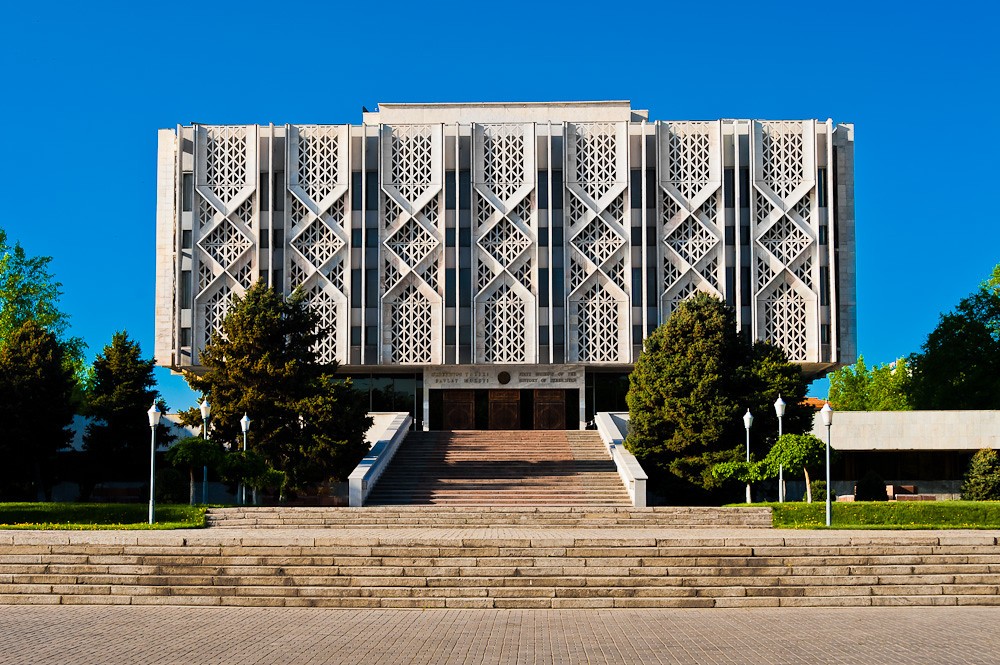 Previously known as the National Museum of Turkestan, this is one of the oldest museums in Central Asia, founded in 1876.  It has over 250,000 exhibits reflecting Uzbek history from prehistoric to modern times. Among these are: a well preserved Gandharan alabaster Buddha relief from Termez; Tamerlane calligraphy; and ethnic art and costumes.

‘Zindan’ means prison in Persian, and this prison, built in the 18th century was used to house criminals and dissenters during the Bukhara Emirate. Able to house up to 40 prisoners, the brick structure also has a circular pit.  After the fall of Bukhara Emirate in 1920, the Zindan of Emir ceased to operate, and was eventually turned into a museum. This is the palace of the last ruler of the Kokand Khanate, Khudayar Khan. Often called the ‘the Pearl of Kokand,’ it was built in 1871 and cover four acres of lush green land. It once had seven courtyards and 119 rooms. However, only two courtyards and 19 rooms are open to the public today.

With such a rich cultural heritage and so many amazing places to visit in Uzbekistan, it should definitely be on your list of potential holiday destinations. And, to make things easier, here’s a specially curated travel package to the land of ancient mysteries – Uzbekistan.

Creative ninja and a true follower of ‘Work, Save, Travel, Repeat’, I love to travel, experience places and bring back stories for a lifetime. Born and brought up in Ahmadabad, I like to visit the same old places, the same clichéd tourist spots and destinations, but choose to see the unexplored in the old places. Always inclined towards the mighty mountains in their debate with the beaches!