Temples in Japan You Need to Visit on Your Next Vacation

Situated in the northwest Pacific Ocean, Japan is one of the most popular tourist destinations owing to its diversity of natural sights and magnificent architecture. As one of the oldest countries, Japan has many historical and spiritual treasures to discover, including temples and shrines. Most of these temples are over 1,000 years old, featuring huge complexes made of pagodas, statues, gardens, big wooden gates, and more. While some of these temples are parts of the UNESCO World Heritage Sites, others are federally protected since they are home to several significant religious and historical artefacts. Booking one of the Japan travel packages will allow you to come across various architectural masterpieces that are well worth a visit. If you are planning a trip, here is a list of some famous temples in Japan that you must include in your travel itinerary.

One of the most iconic and famous temples in Japan, Kinkaku-Ji is a must-visit stop on any visit to Kyoto. Constructed in 1937 as the home of a shogun, or military chief, Ashikaga Yoshimitsu, the temple was formally known as Rokuonji. One of the most photographed places in Kyoto, Japan this temple features many small outdoor shrines and beautiful Japanese zen gardens. The temple is also called the golden pavilion, as its top two stories are covered in gold leaf. Each floor in this golden temple in Japan represents a different style of architecture. The next on the list of best temples in Japan, Sensō-Ji, is an ancient Buddha temple in Asakusa, Tokyo. With over 1300 years of history, Sensō-Ji is home to a sacred sculpture of Kannon, the goddess of mercy. Most of the part of Sensō-Ji temple was rebuilt after World War II. However, it remains the most important place for culture and history in Japan. The history of this oldest temple in Japan states that two brothers found a statue of Kannon from the Sumida River while fishing. They tried to return it to the river, and despite many efforts, the idol came back to them. Later, the temple was built in that location to honour the goddess. One of the most colourful and renowned temples, Sensō-Ji looks divine and magnificent in the evening when the illumination highlights its intricate architecture.

The Kōtoku-in is yet another Japanese Buddhist temple, famous for a giant, 43ft tall bronze Buddha statue sitting outside the temple. Dating back to the 13th century, Kotoku-in now belongs to the Jodo Shu sect of Japanese Buddhism. The temple has managed to withstand many calamities, including tsunamis, earthquakes, and wars, without facing any scratch or chip on the structure. As one of the famous temples in Japan, this should be a part of your itinerary when planning a trip here.

One of the most iconic Hindu temple chains, the ISKCON temple in Japan is a must-visit religious place for tourists. Located in Edogawa, Tokyo, the ISKCON temple is dedicated to Lord Krishna and Goddess Radha in the form of Radha Parthasarathi. This Vaishnav temple hosts many events and conferences that are joined by all ISKCON leaders from different parts of the world. Those who want to enjoy a delicious sattvik meal can visit Govinda’s, a vegetarian restaurant located inside the premises of the temple. This beautiful temple in Japan hosts so many activities and events in the temple complex that you can spend the whole day here. A famous Buddha temple in Japan, the Todai-Ji is one of the largest wooden structures in the world. Located in the city of Nara, Japan, the temple is the most famous and historically significant place of worship in Japan. Founded in 738 CE as the head temple of all regional Buddhist temples of Japan, the temple was officially opened in 752 CE when Nara was the capital of Japan. This massive building is home to the biggest bronze statues of Buddha (Daibutsu) in Japan. The temple complex is spacious, covering most of the northern Nara Park, including many small Japanese shrines and points of interest near the Daibutsuden Hall.

If you are planning to visit Tokyo in Japan, do visit this unique Buddha temple called Gotokuji temple. It is a serene temple situated away from the noisy city of Tokyo. It has become a famous place in Tokyo due to a legend mentioning it as the birthplace of the Maneki-Neko (beckoning cat), known as a good luck charm. Built in the 17th century, the grounds of Gotokuji temple are adorned with thousands of Maneki-Neko, these lucky cats that are mostly gifts from visitors wishing for good fortune. It is a perfect stop for cat lovers and those interested in Japanese culture.

Ryoan-Ji Temple is another famous shrine in Kyoto built around one of the biggest rock gardens in Japan. Situated in northwest Kyoto, this Zen temple belongs to the Myoshinji School of the Rinzai sect of Zen Buddhism. While the Ryoan-ji’s garden is a beautiful place on its own, there are many other incredible things to see and experience inside and around the temple. The temple complex was formerly a home for an important leader and was converted into a temple in the 1100s. Here you can spend hours visiting gorgeous temple structures, sprawling gardens, and houses that are from the late 8th century. One of the most celebrated temples, Kiyomizu-Dera is a Japanese Buddhist temple in eastern Kyoto. It was founded in 780 near the Otowa Waterfall in the wooded hills and derived its name from the pure waters of the fall. As UNESCO World Heritage Site, this Kyoto shrine has many buildings beyond the main temple hall. You can walk through the leafy gardens, visit the Koyasu Pagoda, and pay respect to the Jishu Shrine, which is said to give luck in love.

At this temple, visitors can use wooden cups to have flowing water from the fall, which is said to provide many benefits such as good health and wealth. The huge wooden stage of the temple offers incredible sights of cherry and maple trees and the city of Kyoto in the distance.

Located in the centre of a Japanese garden, Nezu Shrine is one of the oldest places of worship in Tokyo. Set in lush greenery, this Japanese shrine is surrounded by ponds of carp, beautiful wooden structures, and pathways that are tunnels of small shrine arches. Dating back to 1705, Nezu Shrine is famous for its Azalea Spring Festival, when above 50 species of azaleas are in full bloom between April to May. Many events and performances take place in the complex of the shrine. There is also a small cafe area where you can enjoy a variety of delicious foods like amazake, dumplings, and green tea. If you want to experience the culture and colourful vibe of Japan, you must visit this temple in Tokyo during the Azalea Spring Festival. In addition to the ones mentioned in the above list, there are many other small temples and shrines that you can include in your trip package. If you want to enjoy a trip with a little peace of mind, the temples of Japan can be your haven. Remember to make the most of your trip by travelling in superfast bullet trains in Japan that are famous worldwide. 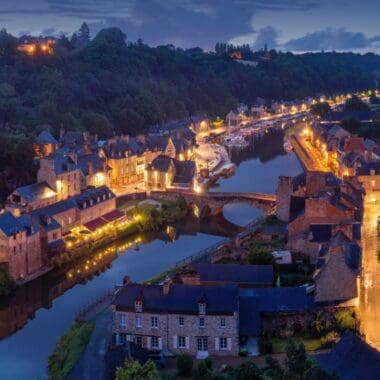 Best European Countries to Visit in 2022