Blog › 12 Most Beautiful Places to Visit in Bhimtal 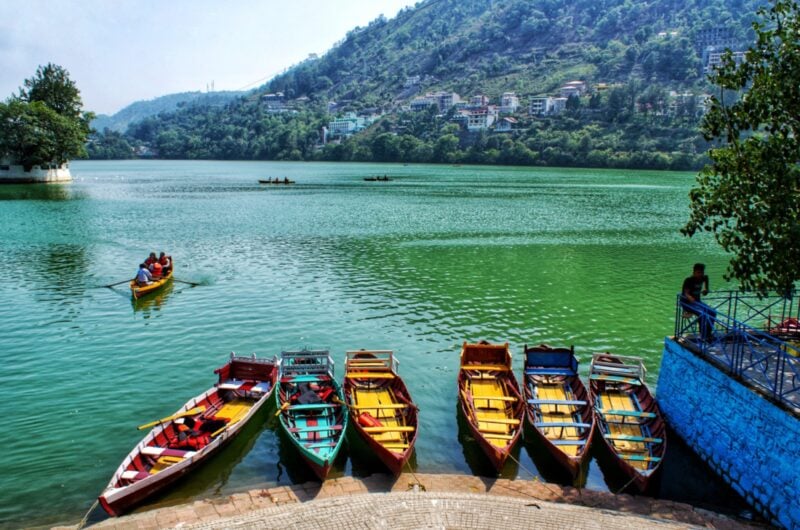 12 Most Beautiful Places to Visit in Bhimtal

Blue skies, scintillating lakes and tranquillity wrapped in the blanket of nature, Bhimtal is one of the most beautiful tourist destinations in Uttarakhand that awaits your discovery. The beautiful city of Bhimtal is surrounded by forested hills and lakes and offers a stunning view of the Himalayas. Bhimtal is located at a height of approximately 1,270 metres above sea level and is one of the most popular tourist destinations in the Kumaon region of Uttarakhand. This quaint little city of Bhimtal is a place which is named after Bhim, one of the Pandavas from the Hindu epic mythology, Mahabharata. If we dig deep into the history of Bhimtal, it is older than Nainital, and its routes connecting to Kumaon hills, Kathgodam, Nepal and Tibet are believed to be a part of the ancient silk route. Talking about the geography of Bhimtal, to its north lies the Almora district and to its south lies the Udham Singh Nagar district. Bhimtal lies on the lap of the Himalayas, which is located to the North of Bhimtal.

Travelling solo, with your family or on a honeymoon, Bhimtal in any case won’t disappoint you, as Bhimtal is filled with tourist places starting from pristine temples and beautiful lakes to adventure activities, all lined up, especially for you. Located approximately 22 kilometres from Nainital, if you are planning a Nainital holiday package anytime soon, here are a few places to visit in Bhimtal from us to spend a beautiful vacation in Bhimtal. Bhimtal Lake is one of the oldest and most beautiful places to visit in Bhimtal, which is surrounded by magnificent green hills and offers stunning views to the onlookers. The Bhimtal Lake was named after the Bhima, who was a legendary character from Indian mythology, Mahabharata. To spend your time at Bhimtal Lake, you can take a stroll around the lake or enjoy boating in the lake. Birdwatching is another popular activity which is popular during the spring and autumn months at Bhimtal Lake.

Naina Peak is the highest hilltop and offers a spectacular view of the entire valley and the mighty Himalayas. If you are an adventure enthusiast, hiking the Naina Peak is one of the best places to see and visit in Bhimtal. Naina Peak is also frequently visited by a flock of tourists throughout the year for the splendid view the hill has to offer.

Karkotak Temple in Bhimtal is dedicated to Lord Karkotak, which is the god of snakes. The temple is an equally important tourist place in the entire Bhimtal which is not just frequented by worshippers but also tourists who want to rejuvenate their minds, bodies and souls by meditating while enjoying the unspoiled views of the Himalayas. The Karkotak Temple is adorned with a gold-plated roof and carved walls, which is also home to many small temples and temple residences.

If you want to refresh your senses just by witnessing the beauty of nature, head to the Garg Parvat, which is an unexplored place to visit near Nainital in Bhimtal in the Kumaon region in Uttarakhand. Garg Parvat in Bhimtal is a place where the holy river Gargi makes its way, and hence the hill is known as Garg Parvat. The hill is also popularly known as “the valley of the flowers” since the place is covered with a carpet of colourful flowers. Garg Parvat is also one of the best places to visit in Bhimtal for hiking if you are seeking something adventurous in Bhimtal.

Hidimba Parvat is one of the many peaks in the Himalayas, which is home to a variety of flora and fauna. Hidimba Parvat is a sightseeing place in Bhimtal, also known around the world for its many warm springs, which are believed to have medicinal properties. The views from the Hidimba Parvat are great and worth adding to your places-to-see list in Bhimtal. You can even add trekking as one of the itineraries in your trip to Hidimba Temple, which is another non-missable opportunity. Also known as Lok Sanskriti Sangrahalaya, Folk Culture Museum is one of the popular places to visit near Bhimtal, which is situated just 5 kilometres from the town of Uttarakhand. The museum was established in 1995 and has a collection of treasured exhibits, including paintings and wooden artefacts. There are so many things to visit and do near Bhimtal Lake, and visiting the Folk Culture Museum is one such to do, which you must not miss.

The word Naukuchiyatal means “nine corners lake”, which is another beautiful tourist spot in Bhimtal, perched at the height of 1,220 metres above sea level. Naukuchiyatal is one of the famous places in Bhimtal, which is a quaint village in the Nainital district in Uttarakhand. The Naukuchiyatal village is surrounded by greenery, temples and monasteries, which just increase the beauty of the place. You can even plan several adventurous activities around the place, like trekking, paragliding and rock climbing, if you are someone interested in seeking adventure in nature.

Bhimtal is an ideal holiday destination when you want to get off the beaten path and embrace nature. We hope the blog helped you in making your own bucket list of the best places to visit in Bhimtal and plan your vacation. At Veena World, you can find an abundance of Nainital holiday packages, which are carefully crafted especially for you, including all-inclusive in-city tours, accommodation, travel guides etc., in Bhimtal. If you want to plan your own vacation according to your preferences, do check out Veena World’s customise holiday option. 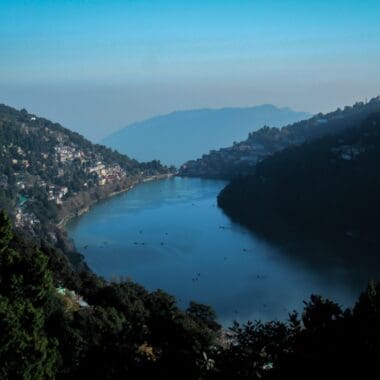