The much-awaited nine nights of the year, filled with reverence and devotion are here. However, just like all other festivals, Navratri too is going to be different this year. With social distancing norms in place, our beloved Dandiya Dance, which we used to look forward to every year may not happen in all its glory. While the tunes and beats of traditional Gujarati  Garba may still be played, however, we won’t be able to indulge in the euphoria of swirling to them, dressed up in our traditional best, along with our friends. That’s a bitter reality this year and we have no other option than accepting it. Rather, it’s our responsibility that we don’t break any of the norms and avoid any kind of super-spreader event to take place.

Navratri, being celebrated for full 9 nights and 10 days is among the longest of Indian festivals. Culminating with Dussehra, Navratri is the time of the year when we celebrate Goddess Durga in her nine forms all through the nine days. The tenth day which is celebrated as Dussehra or Vijaya Dashmi celebrates the victory of Lord Rama over Ravana and thus the victory of good over evil. Theoretically, there are four seasonal Navratri. However, in practice, it is the post-monsoon autumn festival called Sharada Navratri that is the most observed in the honour of Maa Durga.

Well, while we the people of Mumbai are well aware of Navratri as it is celebrated in the city, did you know that the devotion towards Maa Durga manifests in different forms in different parts of India?! Over the past few years, with many Durga Puja pandals across the city, we have been fortunate enough to get to experience and indulge in the slice of Bengal during Navratri. Lucky we!

Through this blog, let’s take our journey of cultural extravaganza ahead and get to know about Navratri celebrations around India in many more different ways.

In Maharashtra, the Navratri puja vidhi begins on the first day of Navratri with Ghatasthapana (sthapana of a ghat), which literally means ‘mounting of a jar’. On this day, rural households mount a copper or brass jar, filled with water, upon a small heap of rice kept on a wooden stool (colloquially known as ‘paat’). Additionally, with the jar, are placed eight varieties of agriculture symbols, like mango leaves, coconut, major staple grains, etc. The family worships the pot for nine days by offering rituals and a garland of flowers, leaves, fruits, dry fruits, etc. with a naivedya (offering of food), and water is offered to get the seeds sprouted. On the eighth day, a ‘Yajna’ or ‘Hoam’ is performed in the name of Goddess Durga. On the ninth day, the Ghat puja is performed and the Ghat is dismantled after taking off the sprouted leaves of the grains. On the ninth day or Khande Navami of the festival, men participate in worshipping all kinds of tools, weapons, vehicles and productive instruments.

Navratri is one of Gujarat’s main festivals. The traditional celebrations include fasting for a day, or partially each of the nine days such as by not eating grains or just taking liquid foods. The prayers are dedicated to a symbolic clay pot called ‘Garbo’, as a remembrance of the womb of the family and the universe. The pot represents the source of life and the light represents Shakti (power). Every evening, women who are fasting, dedicate their prayers to ‘Garbo’ with Diyas (oil lamps). The Garbo significance is celebrated through performing arts on all nine days. The folk dance of Garba (performed in concentric circles whilst clapping hands) is danced accompanied by a live orchestra, seasonal raga, or devotional songs. The dance deploying Dandiyas (sticks) is called ‘Dandiya Raas’. Moreover, songs in the praise of Goddess Durga, known as Navratri ki Aarti, which are sung every evening, also form a significant part of the rituals and celebrations. Veena World’s special Gujarat tour packages, operating during the Navratri festival have been one of the hot favourites among our guests for years now.

In the temples and some households of Goa, on the first day of Navratri, a copper pitcher is installed surrounded by clay (in which nine varieties of food grains are placed) inside the sanctum sanctorum of the Goddess and Krishna temples. Celebrations include placing the Goddess image in a specially-decorated colourful silver swing, known as Makhar in Konkani language and for each of the nine nights, she is swung to the tune of temple music (called as Ranavadya) with devotees singing Kirtan (devotional songs) and waving lamps. This is locally called Makharotsav. The last night of the Goa Navratri festival is a major draw for devotees and tourists. It’s a major celebration and is locally called the Makhar Arati.

The Navratri is celebrated as the Durga Puja festival in West Bengal. Durga Puja festival marks the battle of Goddess Durga with the shape-shifting, deceptive and powerful buffalo demon Mahishasura, and her emerging victorious. The last five days of Navratri mark the popular practices during Durga Puja. The next most significant day of Durga Puja celebrations is the sixth day, called Shashthi where the local community welcomes the Goddess and festive celebrations are inaugurated. On the seventh day (Saptami), eighth (Ashtami) and ninth (Navami), Durga along with Lakshmi, Saraswati, Ganesha, and Kartikeya are revered and these days mark the main Durga Puja vidhi with a recitation of the scriptures and the legends of Durga in Devi Mahatmya and social visits by families to elaborately decorated and lighted up temples and Pandals. A very special festive meal, call ‘Bhog’ is served for free to all those who come for the puja and is similar to langars that take place in Gurudwaras. It is an auspicious part of Durga Puja, as not only does it offer traditional Bengali food, but it also celebrates Durga Puja by adding a hue of Bengali tradition. Dressed in traditional attire, devotees offer prayers in the evening and perform Dhunuchi Naach, a special dance with earthen lamps. After the nine nights, on the tenth day called Vijaya Dashami, married women play ‘Sindoor Khela’ wherein they play with Sindoor (vermillion) and apply it to each other’s heads and faces. Later on, a great procession is held where the clay statues are ceremoniously walked to a river or ocean coast for a solemn goodbye to Maa Durga.

In North India, Navratri is marked by the numerous Ramlila events, which is the enactment of the episodes from the story of Lord Rama and Ravana on temporarily constructed stages. In 2008, Ramlila was inscribed by UNESCO as one of the ‘Intangible Cultural Heritage of Humanity’. Ramlila is particularly notable in historically important cities of Ayodhya, Varanasi, Vrindavan, Almora, Satna and Madhubani and other cities of Uttar Pradesh, Uttarakhand, Bihar and Madhya Pradesh. Moreover, at the end of Navratri, on Dusshera, effigies of Ravana along with those of his brothers’ Kumbhakarna and Meghnada are burnt to celebrate the victory of good over evil. The most famous Navratri festival is organised and promoted by Directorate of Tourism, Jammu and Shri Mata Vaishno Deviji Shrine Board, wherein hundreds of thousands of devotees attend the festival at Katra. Elsewhere, Goddess Durga’s war against evil is remembered by installing a pot (similar to Gujarat) at a sanctified place at home with a lamp kept lit in the pot for nine days. While the pot symbolises the universe, the uninterrupted lit lamp symbolises Adishakti, i.e. Maa Durga.

In Tamil Nadu, Navratri pays homage to all three Goddesses – Durga, Laxmi and Saraswati. The three Goddesses are venerated on three separate days during which friends and families gather to celebrate and exchange gifts and sweets. Another integral part of the Navratri celebration in Tamil Nadu is the display of Kolu (figurines), which are arranged to narrate popular legends from the scriptures.
The biggest draw for travellers during Navratri in Karnataka is the Dussehra celebration in the city of Mysore, which follows the same rituals first practised by King Raja Wodeyar l in 1610 AD. On the ninth day of the festival (Mahanavami), the royal sword is set on a throne to be worshipped and taken on a procession of elephants and horses. On the 10th day (Dussehra), another grand procession of dancers and musicians escorting an image of Goddess Chamundeshwari (a form of Durga) mounted on a golden saddle atop an elephant is carried through the city. All through the festival, the world-famous Mysore Palace is all decked up and completely illuminated. Navratri in Kerala is celebrated by worshipping Goddess Saraswati during the festival. Education takes centre stage during the time, as people place books on the altar of the Goddess of Knowledge. A prayer ceremony takes place on Ashtami (the eighth day of the festival) and on the 10th day, the books are taken out and read as part of the ritual. Vijaya Dashmi day is considered auspicious for initiating the children into writing and reading, which is called Vidyarambham.

It’s said that it’s during Navratri that Goddess Durga descends on earth to take away all that’s worrying her children residing here. In these auspicious days of Puja, let’s pray to our dear mother that she liberates the earth from the pandemic and life returns to normal as before. Let’s make plans for how are we going to bounce back as a safe and healthier world next year, all set to welcome her with all that pomp and grandeur. And yes, now, since we know of how Navratri gets special across various parts and states of India, we can certainly start thinking of the Navratri special festival tours that by now we have already decided to take next year. Here’s wishing you and your family a Very Happy Navratri and Dussehra!

10 Best Places to Visit Near Lucknow 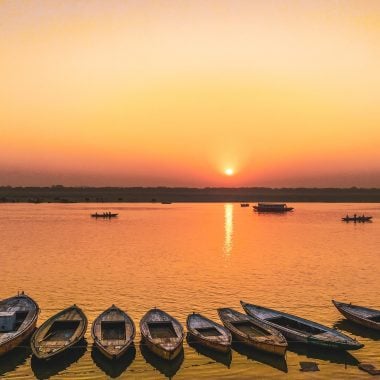 10 Best Hotels in Varanasi for the Perfect Stay