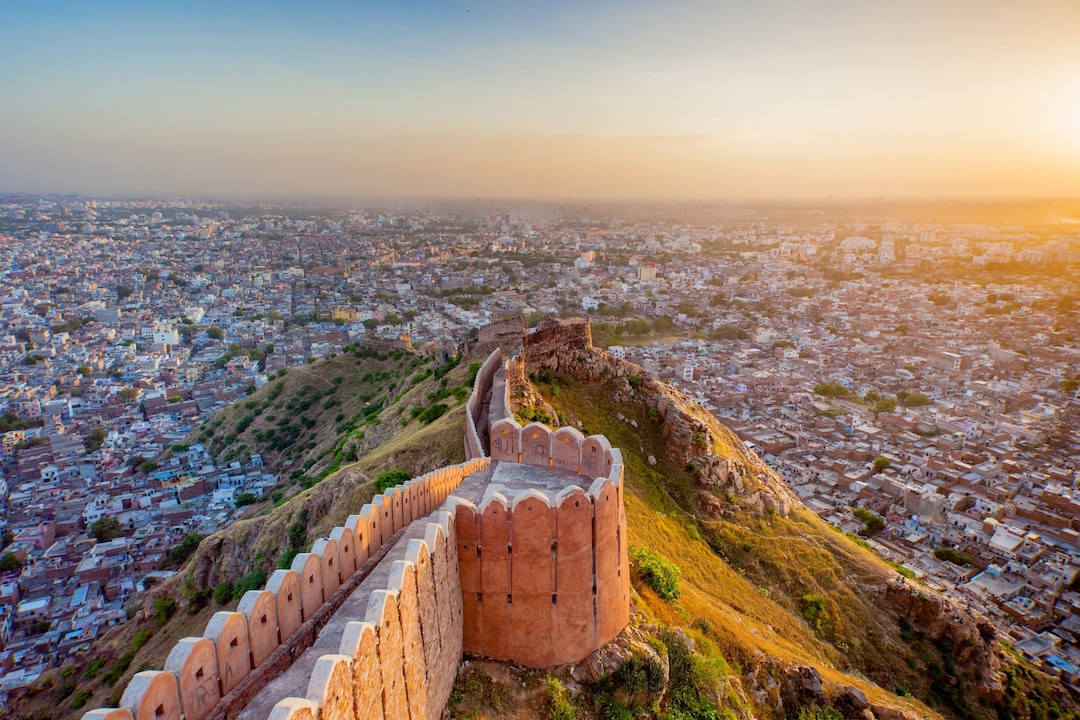 Rajasthan is famous as the royal state of India that attracts tourists with its rich culture, beautiful palaces, and majestic forts. Nahargarh Fort is one such glorious fort in the state, located in the Aravalli mountain ranges in Jaipur. Once known as Sudarshangarh, the Nahargarh Fort was built by Maharaj Sawai Jai Singh II in 1734. With its glorious past and imposing architecture, Nahargarh Fort attracts tourists from all over the world. It is also known as one of the largest forts in India, reflecting the charm of Rajasthan and its legacy. One of the best places to visit in Jaipur, Nahargarh Fort, is associated with many important historical events. Here is everything you should know about Nahargarh Fort in Jaipur. 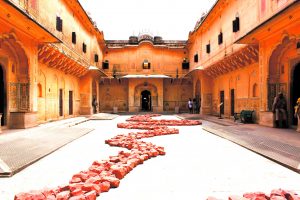 Earlier, Nahargarh fort, along with Jaigarh Fort and Amer Fort, formed a strong three-point defense strategy around the city. Located on Cheel ka Teela or Hill of Eagles, the fort represents a perfect example of Indo-European architecture. With grand gates, huge courtyards, and towers, the fort displays the influence of the Rajputana kingdom. The fort houses nine similar suits constructed for each of the nine queens of Sawai Madho Singh. All these suits are connected to each other by corridors and have a kitchen, lobby, bedroom, and other vital sections. The suites are marvellously adorned with Rajput Mughal frescoes showcasing the lifestyle and culture of Rajputs. The names of these suits are Chand Parkash, Jawahar Parkash, Suraj Parkash, Ratan Parkash, Laxmi Parkash, Vasant Parkash, and Lalit Parkash, etc.

The fort also comprises a couple of temples dedicated to the rulers of Jaipur and the prince Nahar Singh Bhomia. Nahargarh Fort in Jaipur also has the prominent architectural structure Diwan-i-Aam – a common hall used by the kings for public meetings to resolve complaints made by common people. The fort also has two-step wells, one inside the complex and another one within the ramparts. A distinctive trait of these wells is they are designed asymmetrically, unlike other step wells in India.

Constructed in 1734 by Sawai Jai Singh II – the then Maharaja of Jaipur, the fort was initially named Sudarshangarh, and later it was renamed Nahargarh. Though the fort was primarily built for defense purposes, it was never attacked by enemies during its entire history. However, in the 18th century, the fort was used for events like the signing of treaties with Maratha forces. The fort also served as a retreat for the hunting trips of the royal family.

The fort is open from 10 AM to 5:30 PM in the evening. The timings to visit Nahargarh Fort are the same on all days of the week.

Attractions in and around Nahargarh Palace in Jaipur 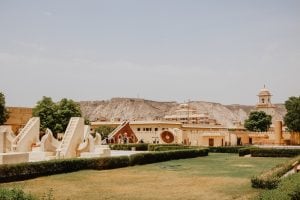 One of the most famous tourist attractions in Jaipur, Jantar Mantar, was built in 1734 by the Rajput king Sawai Jai Singh II. Located at the heart of the city, the Jantar Mantar is an astronomical observatory featuring the biggest stone sundial in the world. The Jantar Mantar in Jaipur is a sprawling property and a collection of 20 huge instruments that estimate the positions and progression of the celestial bodies.

Located in the vicinity of the Nahargarh Fort in Jaipur, Nahargarh Biological Park is a sanctuary, sprawling across a 7.2 sq. km area in the Aravalli mountain range. If you like to explore nature and wildlife, you must visit this park on your trip to Jaipur. There is a zoo inside the Nahargarh Biological Park where Bengal tigers, crocodiles, Himalayan black bears, Asiatic lions, wolves, and Indian leopards can be seen in cages. 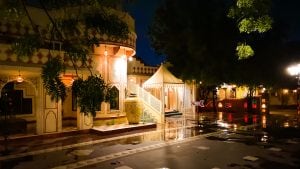 Another name in the list of attractions near Nahargarh in Jaipur is Chokhi Dhani. Famous for its rich Rajasthani heritage and culture, the place is truly a reflection of local Rajasthani traditions. Situated away from the busy city life, in a lively and refreshing surrounding, Jaipur Chokhi Dhani has a unique architecture inspired by the Indo- Saracenic approach. It has a series of reconstructed village huts plastered with mud and cow dung and decorated with attractive wall arts. Inside Choki Dhani, you can enjoy the traditional folk dance performances, magic shows, puppet shows, animal rides, shopping, and relive the historical Haldighati Battle. 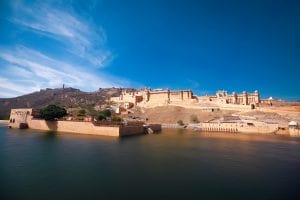 Nestled at the top of the Aravali Hills, Amer Fort, is one of the most famous and magnificent palaces in India. Constructed in 1592 by the loyal general of Akbar Maharaja Man Singh I, the fort is aesthetically designed with red sandstone and marble, reflecting a rustic and mysterious look. The fort showcases a Rajputana and traditional Hindu architecture style. Here, a light and sound show is held each morning and evening, displaying the history of Jaipur and the fort. The show is organized to celebrate traditions, folklore, folk music, and local legends of Rajasthan. 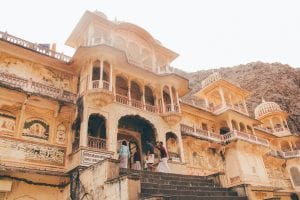 Photo by Mitchell Ng Liang an

Situated on the outer edge of the city, Galtaji Temple is a famous attraction for Hindu devotees. Surrounded by the Aravalli hills, the temple is home to many shrines, pavilions, holy kunds, and natural springs. This majestic temple was constructed using pink-coloured sandstone, and adorned with round roofs, painted walls, and pillars. Galtaji Temple Jaipur boasts of natural freshwater springs and 7 sacred kunds or ponds. Clear and pure water streams pour from a rock formed like a cow’s head or Gaumukh into the pond. This temple is designed like a magnificent palace or haveli than a conventional temple. 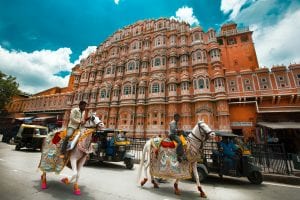 Known as an embodiment of Rajputana architecture, this striking five-storey palace was built by Maharaja Sawai Pratap Singh in 1799. With its facade with 953 latticed windows, the Hawa Mahal represents an iconic landmark in Jaipur. It is an excellent example of brilliant architecture. The complete structure of Hawa Mahal was designed in a unique way that it forms the crown of Lord Krishna. When visiting Nahargarh Fort in Jaipur, make sure you include this beautiful tourist spot in your list. Also known as the water palace, Jal Mahal, is the most striking architectural palace, constructed with Rajput and Mughal craftsmanship. Placed in the middle of the beautiful Man Sagar Lake, the palace is built using sandstone. The four corners of this mahal are adorned by four elaborated chhatris in octagonal shape. Apart from this, a big Bengal-style rectangular chhatri on the roof enhances the aesthetic appeal of the palace. This spectacular palace seems to be floating on the lake’s surface.

For the cultural and heritage experience of Rajputs, Nahargarh Fort in Jaipur is a must-visit fort, as it beautifully gives a glimpse of the Rajputana lifestyle through its majestic rooms, royal chambers, and corridors. With a customizable Jaipur tour package, you can explore the fort effortlessly! 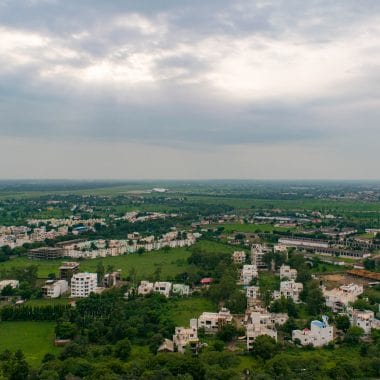 10 Best Hotels in Bhopal For a Pleasant Stay The 12 Best Hill Stations near Chennai