The National Rail Museum which was set up on 1st February 1977 wonderfully showcases the history and legacy of the Indian railways. For anyone visiting Delhi, it is highly suggested to have a visit to the National Rail Museum included in your Delhi tour package. This railway museum in Delhi houses train engines that graced the railway tracks of India and played a crucial part in the development of the country. The museum traces the history of the Indian railway from its beginning to now.

Here are 7 big reasons that make the National Rail Museum a must-visit: –

Railways have been among the lifelines of India for over 160 years. In this period, the railways sector has seen many developments. At the National Rail Museum in Delhi, you can see the evolution from the first train to the latest ones. From local passenger trains to the ones that were once privately owned by rajas and maharajas, you will find the entire galore here. An interesting thing about the museum is that not all trains which are exhibited are static. The museum houses several working trains that are still used on some occasions. Here you will find an array of railway artefacts, historical photographs, and train models. Next to each train are tablets that tell about its history.

The Indian rail museum in Delhi is known not only for its massive collection of trains but also its expansive gallery. The total area covered by the museum is 11 acres and it’s not all indoors. A beautiful gallery has also been set up which resembles a railway yard. The trains exhibited here are life-size original trains that once ran on the railway tracks for over a century. This gallery also has a rail garden and a turntable that showcases different models of trains that have witnessed the vast and diverse Indian terrains. If you are going to the museum with your family and are looking for picnic spots in Delhi, this outdoor gallery will be perfect. This massive collection and the beautiful gallery shine through at the National Rail Museum, New Delhi.

The Indian rail museum in Delhi has a restaurant named The Rails. It is housed in a building that’s a replica of the main building of Chattrapati Shivaji Terminus (formerly known as Victoria Terminus) in Mumbai, Maharashtra. At The Rails, you will see the depiction of the unification of 42 independent railway systems that were once privately owned by the British East India Company and the princely states of India. If you ever wanted your food to be brought to your table automatically, you can have this experience at The Rails. The restaurant has a model steam engine that chugs around the restaurant and serves food at tables that are named after historic railway stations. This rail is inspired by the model train of Maharaja of Gwalior. He had a silver train model that ran around the banquet to serve food to his royal guests. Food is always one of the most memorable parts of vacations, and it will be here as well at the National Rail Museum, Delhi.

4. Houses the Rarest of Rare Exhibits

Museums are known for exhibiting objects that are rare and cannot be seen anywhere else. The Rail Museum in New Delhi is a treasure trove in that sense. You will easily spend the entire day at the museum and it will still feel like the day has gone by in a jiffy. The museum traces 160 years of railways in India. This has been no easy task, and all of it cannot be studied in a day. The museum has the Patiala State monorail, one of the last working steam monorails in India. It was built in 1907 and was used till 1927 when it was decided to put it in the scrapyard. In 1962, it was repaired to bring it to working condition before being exhibiting it in the National Rail Museum, New Delhi. The museum houses 2 of these monorails.

It also has the Fairy Queen which is the oldest working steam engine in the history of the railway. It was built in 1855 and has been properly maintained since then. The Fairy Queen is not just put for display at the museum. It is used a couple of times every year for heritage. This makes Fairy Queen an engine that has seen the entire evolution of Indian railways.

When has a kid ever said no to a ride? This museum is the perfect place especially if you have kids with you on this weekend getaway. At the Indian rail museum in Delhi, you can enjoy the train exhibits and the little ones can have a lot of fun thanks to the plenty of rides on offer. This means that at the museum, learning and enjoyment both happen simultaneously. Your child will learn about the vast and expansive history of the Indian railway as they go along. There are various Toy Trains in the outdoor gallery that your child can ride in. There are also 3D coach rides that put you in the driver seat of an engine driver. It’s a simulator that allows your child to experience what it’s like to drive a train. And this 3D simulator is not just for children; when you visit the museum, you will see many adults using it, and rightfully so. Trains have been fascinating humankind for a long time. How a small engine pulls so many wagons at such high speeds is a remarkable view. It’s a testament to what the human mind can create. With steam engines like Fairy Queen still in working condition, we see how carefully these engines were constructed that they are still in perfect working condition a century after they were built.

No outing is ever complete without bringing home some souvenirs. The train museum in Delhi has a souvenir shop where you can buy gifts and souvenirs for yourself and for your friends. Indian railway has a 160-year long history that cannot be fully studied in one day. If you are visiting the museum for the first time and learning about this cultural heritage and the importance of the Indian railway, your learning should not stop at the end of the day when you return home from the museum. There are various books available in the souvenir store on the Indian railway that you will not find anywhere else. If you are a train enthusiast, the souvenir shop will be a haven because you will find books that are otherwise rare and not easily available. But you don’t have to restrict the shopping at the museum to yourself; you can buy gifts and model trains for children in your family. And if you know someone who’s a reader or who is into trains who would love a book from this shop, get one for them as well.

While the museum is obviously exciting for children, it enthrals adults as well. Several schools in and around Delhi organise their trips to the National Rail Museum because it’s exciting and fun. When adults visit it, the museum has the knack of transporting them back to their childhood. As children, we have all been excited by trains. The nostalgia evoked by this museum is one to be cherished for a long time. Which is why you should click as many photos here as you can to remember the museum. It’s a visit you will fondly look back on in the future when you’re older. It’s something even your children, after growing up, will want to visit once they have children. The museum gives you plenty of opportunities to mark your visit with well-clicked photos.

The ticket price of rail museum in Delhi begins from Rs 10 for children and Rs 50 for adults on the weekdays. On the weekend, the price for a children’s ticket is Rs 20 and Rs 100 for adults. The museum is open on all days except Monday and the national holidays. So bring your family, friends, and children to the National Rail Museum. It will be a visit worth remembering! 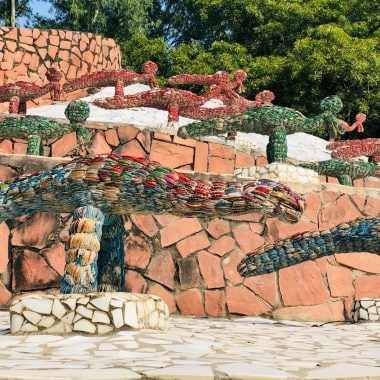