Blog › 10 Reasons Why Bhutan Has To Be Your Next Travel Destination! 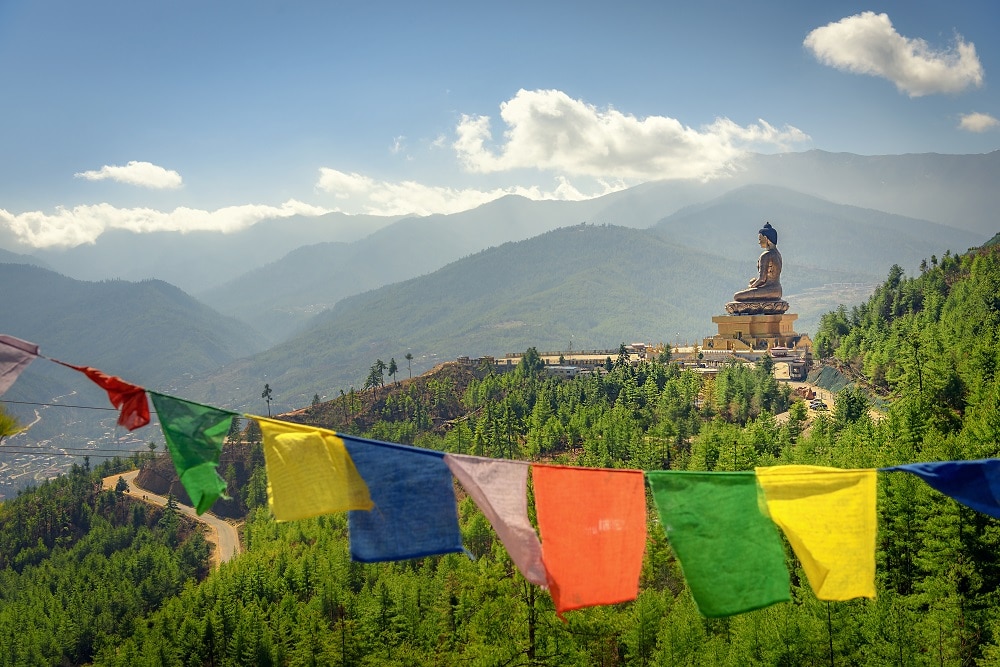 10 Reasons Why Bhutan Has To Be Your Next Travel Destination!

Abundant natural beauty, breath-taking landscapes, magnificent monasteries, ancient Buddhist temples, fluttering prayer flags and happy faces is how I would begin to describe Bhutan! I say, begin to describe because there is so much more to say about this tiny landlocked country that one blog would definitely not be enough. But yes, a journey through the magical and breathtaking lands of this country would surely be a good start to get yourself introduced to the happy country!

I visited Bhutan back in 2015 and I sure did leave a piece of me behind, in this place! Such was the mesmerizing beauty and picture-perfect appeal of this place that the memories of this wonderful country still linger in my heart and mind after all these years. The serene atmosphere, fresh mountain air, clean roads, zero pollution, zero traffic and a simple yet beautiful culture coupled with warm, inviting Bhutanese locals showed me that the world could be quite different just a few miles north-east of India. This was evident right from the beginning of our journey! We were amazed to notice the stark difference between the super clean roads of Phuentsholing (border town in Bhutan) and the crowded grimy streets of Jaigaon (border town in West Bengal) as we crossed the border from India and entered Bhutan. Even so, Bhutan is a much-loved and pampered younger brother of India who fondly refers to our nation as, ‘Bada Bhai’!

On that note, let’s have a look at 10 reasons why Bhutan is one of the most-preferred destinations for a holiday and why it HAS TO BE on your travel list next!

1.) The Pursuit of Gross National Happiness

Make a note of this right away! Bhutan is one of the least polluted countries in the world today where carbon emissions are negligible and people consciously work towards a clean and green environment. This is a country where there is absolutely no traffic, people do not honk horns on the roads, they follow traffic rules and most of all and because road discipline is so religiously observed, there are no traffic lights on the road (rather there isn’t a need for traffic lights!).

Funnily enough, a traffic light was installed in the capital city of Thimphu but it was removed after a mere 24 hours since the locals preferred a traffic policeman rather than a traffic light!

3.) Welcome to the Land of Culture & Heritage!

Bhutan is a country where ancient culture thrives in the best way possible! The Bhutanese have slowly and steadily marched towards progress but they have always been grounded to their beliefs and traditions. For e.g. it is mandatory for a Bhutanese man/woman to wear the traditional Bhutanese attire whenever he visits any official/religious/judicial premises in Bhutan. This not only keeps the tradition alive but also instils a sense of integrity and cultural pride in the people.

Bhutanese are also experts in various arts and crafts such as textiles, paintings, sculptures, paper making, wood carving, sword making, bamboo craft, jewellery making and sports such as archery, futsal, khuru, soksom, pundo and digor that play an important role in their profound history and heritage. Did You Know? Archery is the most popular and the national sport of Bhutan!

Guru Rinpoche founded Buddhism in Bhutan and set course for a simple lifestyle that ensured people were honest, hardworking but also spiritually inclined and grounded to their religious roots. In Bhutan, Buddhism is not a religion, it’s a way of life! People are generally content and peaceful often meditating at the many Buddhist monasteries or contributing their fair share and participating in the traditional festivals. You deserve that much-needed break too, from our busy, chaotic and stress-ridden lives. And what better place than Bhutan to help you achieve that sense of happiness, content and peace of mind?

5.) Be Amazed by Stunning Natural Beauty

Bhutanese law dictates that atleast 60% of land should be under forest cover at any given time! This bodes well with the country as it currently has about 71% forest cover that helps in maintaining and preserving the natural eco-system of this destination. The hilly landscapes, a variety of flora fauna, lush green valleys, sparkling water bodies along with verdant slopes and mountains provide a unique bio-diversity and balance of nature to the country. Natural beauty is at its best and more importantly, the environment is pure and significantly pollution-free for locals as well as tourists.

Did You Know? Bhutan was awarded the ‘Earth Award’ in March 2018 at the ITB (International Tourism Bourse) in Berlin, Germany. Bhutan was selected as the winner among 100 sustainable destinations for its efforts to promote responsible tourism. With this, Bhutan is the leading green destination in the world.

To know more about planning a trip to Bhutan, read: How to Plan a Budget Friendly Trip to Bhutan from India?

One of the most significant and iconic monasteries of Bhutan! Tiger’s Nest Monastery or Paro Taktsang is a Buddhist temple complex perched on a clifftop in Paro Valley. The monastery, built in 1692, is dedicated to Guru Padmasambhava (Guru Rinpoche or Second Buddha) – the founder of Buddhism in Bhutan. A popular legend states that Guru Rinpoche fled from Tibet on the back of a tigress and flew to this exact location which later came to be known as Taktsang (Tiger’s Lair). The monastery can be reached via a short trek that takes us from the base of the village through steep slopes, hills and bridges towards the monastery on the top. The view from here is one of spectacular wonder, calmness and peace of mind!

7.) A reason to celebrate, bond together and have fun – Tshechu (Festivals)

The cultural diversity of Bhutan is reflected in the many colourful festivals (Tshechu) celebrated around the country. These are annual social gatherings that are held in every district of Bhutan where the festivities, events and even the month of celebration are unique from one another. The Punakha Tshechu celebrated at the iconic, Punakha Dzong is one of the most popular festivals in the country. The unfurling of the Thongdrol (a large tapestry) usually depicting Guru Padmasambhava surrounded by holy beings is the main attraction of this festival. It is believed that a mere viewing of this tapestry is enough to cleanse the sins of the viewer!

Bhutanese style masquerade dance (Cham), re-enactments of ancient Bhutanese legends, battle scenes (victory over Tibet), viewing of Thankas and local delicacies such as red rice, spicy pork, traditional rice wine (Ara) and Ema Datshi (National dish of Bhutan) are some of the most common features of these festivals.

Undoubtedly one of the most beautiful monasteries in the country!  The Punakha Dzong is a lovely riot of colours, especially in spring, when the purple jacaranda trees bloom in all their glory against the white-washed walls of the monastery and the picture-perfect backdrop of the lush green mountains. A stunning sight you must definitely not miss when you visit Bhutan. Punakha Dzong is the second oldest and the second largest monastery in the country, certainly one having great historical as well as cultural significance. It is lovingly placed on the banks of the confluence of Mo Chhu (Mother) and Po Chhu (Father) Rivers. Whitewater river rafting is a well-known adventure sport along these rivers!

9.) A Mountain Pass Worth Passing Through!

Dochula Pass, on the way between Thimphu and Punakha, is a sight to behold! This lovely mountain pass is where you will find 108 memorial chortens or stupas built in honour of Bhutanese soldiers who sacrificed their lives in the battle against Assamese insurgents in December 2003. Also known as the ‘Druk Wangyal Chortens’, the stupas have been commissioned by the eldest Queen Mother, Ashi Dorji Wangmo Wangchuk of Bhutan. Another reason why Dochula Pass is a must-visit tourist attraction in Bhutan is the breath-taking 360 degrees panoramic view it offers of the surrounding snow-clad Himalayan ranges. The Dochula Pass is also home to the beautiful Druk Wangyal Lhakhang Temple and Royal Botanical Park (the very first botanical park of Bhutan).

This Buddha statue alone is enough to make you want to visit Bhutan atleast once in your lifetime! The Buddha Dordenma Statue is located on top of a hill at Kuenselphodrang Nature Park in Thimphu. The statue represents Shakyamuni Buddha in a sitting meditative position and the throne on which the Buddha sits is a huge meditation hall. The massive statue is made of bronze and gilded in gold. It measures 51.5 metres in height, making it one of the largest Buddha statues in the whole world. The serene expression, benevolent eyes, the half-smile and the quiet calm posture of the Buddha exudes peace and content unlike any other!

How about that? 10 reasons to make you believe that Bhutan is truly a land of happiness, culture, natural beauty and peace! We are so entangled in the daily monotony of our lives that sometimes, we forget to breathe, take a break, relax a bit or simply appreciate the finer things in life. A journey through the wonderful land of Bhutan will make you realize that it’s not difficult to be happy! All you have to do is give yourself that much-needed break at a destination that lets you find your inner peace…

So, when are you heading to the Kingdom of Happiness for a journey of self-discovery?