Thailand is situated in the centre of Indo-Chinese Peninsula in South East Asia. Its long stretches of coastline touch the Andaman Sea on one side and the Gulf of Thailand on the other. While its coastline brings umpteen opportunities for the beach lovers to unwind on the white sand, its green lands and wilderness attract several adventure junkies. Hedonism defines Thailand for its ability to proffer the utmost fun, amazing adventure, and fabulous cultural indulgence. Better known as the Land of Smiles, this place is going to leave you astounded. You can pamper yourself with traditional Thai massages, explore woodlands, go trekking, rove the street markets, and savour the sweet and spicy flavours of Thai Cuisines.

Now, Thailand may be famous among the travellers for its enchanting landscapes, dazzling and magnificent beaches, lush green forests, and immense wildlife. Well, there’s an enchanting side to it as well – amidst this natural beauty lie some of the most famous temples in Thailand that are brilliant specimens of different construction styles that stood through eras. The places of worship in India or Japan signify an evolution in the forms of architecture since the historic period; temples in Thailand, on the other hand, are a reflection of evolving building styles.

These well-formed structures of religious as well as historic importance are must-see places. In addition to some of the famous tourist destinations in Thailand, your Thailand group tour package should also include a few from these 10 famous temples in Thailand: – 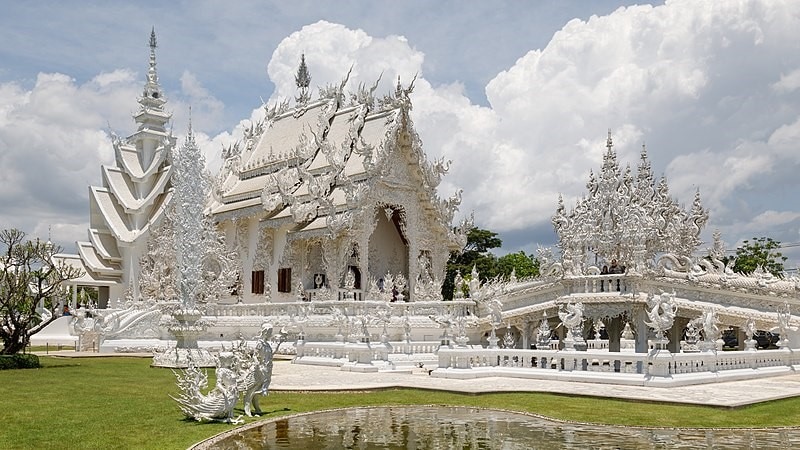 Wat Rong Khun is magnificently white and has glass plastered on the walls which further add to its lustre. Its distinguished architecture sets it apart from other Thailand temples. This design and look to the temple was given by Chalermchai Kositpipat, a contemporary artist born in Chiang Rai. He started working on this temple in the 20th century and brought this temple up from the relics. A temple that was, till 20th century, in complete ruins now has nine buildings including ubosot, a hall of enshrining Buddha relics, a meditation hall, the monks living quarters, and an art gallery.

This Thailand temple is made with teak wood. The brainchild of Thai businessman Lek Viriyaphan, this shrine is a specimen of Thai construction style of the Ayutthayan period. The 105-metre tall hall of this temple has intricate carvings of Buddhist and Hindu motifs, which gives spectators a sight that stays etched in the memory. Besides these delicate carvings, you will come across the statues of elephants, effigies, and idols of different deities. This temple carries extreme religious importance in the life of worshipers, both Thai and foreign. However, that doesn’t refrain the appreciators of philosophy, art, culture and faith from visiting it. 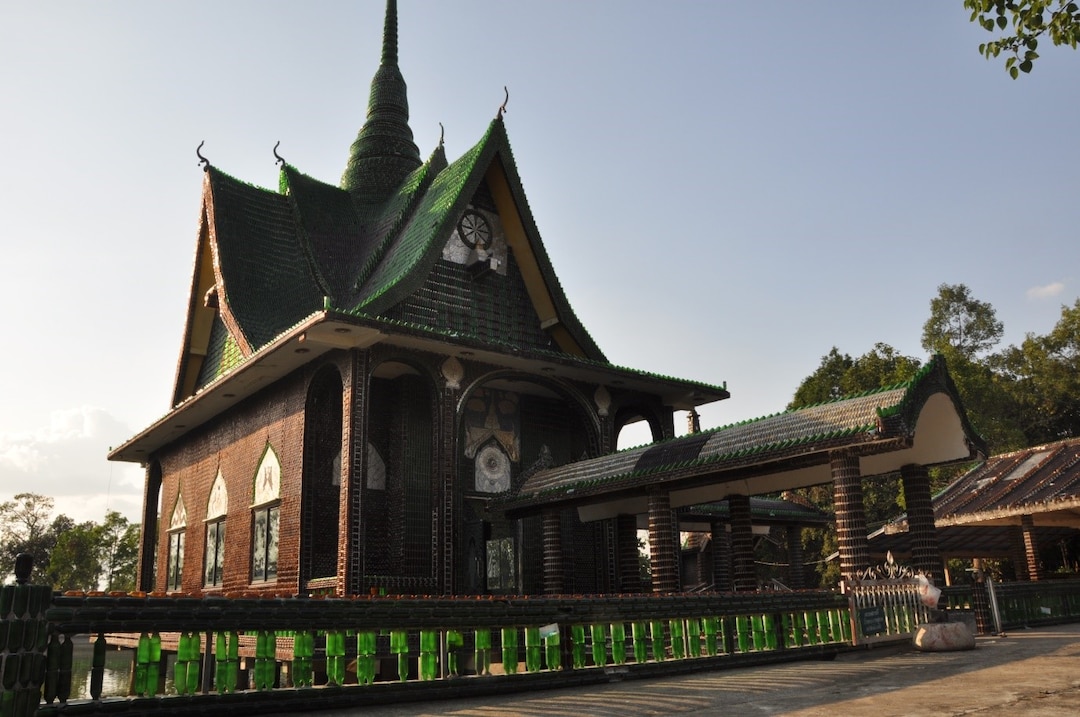 This giant structure made of beer bottles will become a part of your travel tales forever, once you visit this place. The amazing view of light reflected by the bottles will urge you to visit this Thailand Buddha Temple over and over again. Started as a project to recycle waste bottles in 1984, this place is now a multi-building structure. Mostly Heineken bottles and brown Chang bottles were used to make this temple and by 2009 almost 20 buildings were constructed in a similar fashion. Where bottles were used to form the walls of this building, bottle caps were brought for creating mosaics and Buddhist designs. Being constructed out of beer bottles, this temple has also come to be known as the Temple of million bottles. 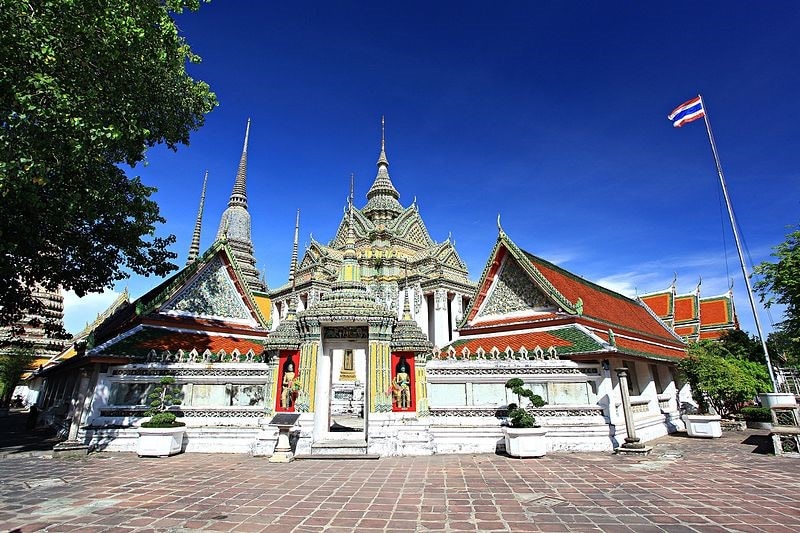 Wat Pho is one of the oldest and largest Thailand Buddha Temples. It is officially named as Wat Phra Chetuphon Wimonmangkhalaram. However, most people recognize this temple as the temple of Reclining Buddha in Thailand. This is because this shrine has a 46-metre long and 15-metre high reclining Buddha statue. This place is a major attraction for visitors – this 8-hectare land has Bodhi Tree, more than a thousand Buddha images, and the National Headquarters for Teaching and Preservation of Traditional Thai Medicine. 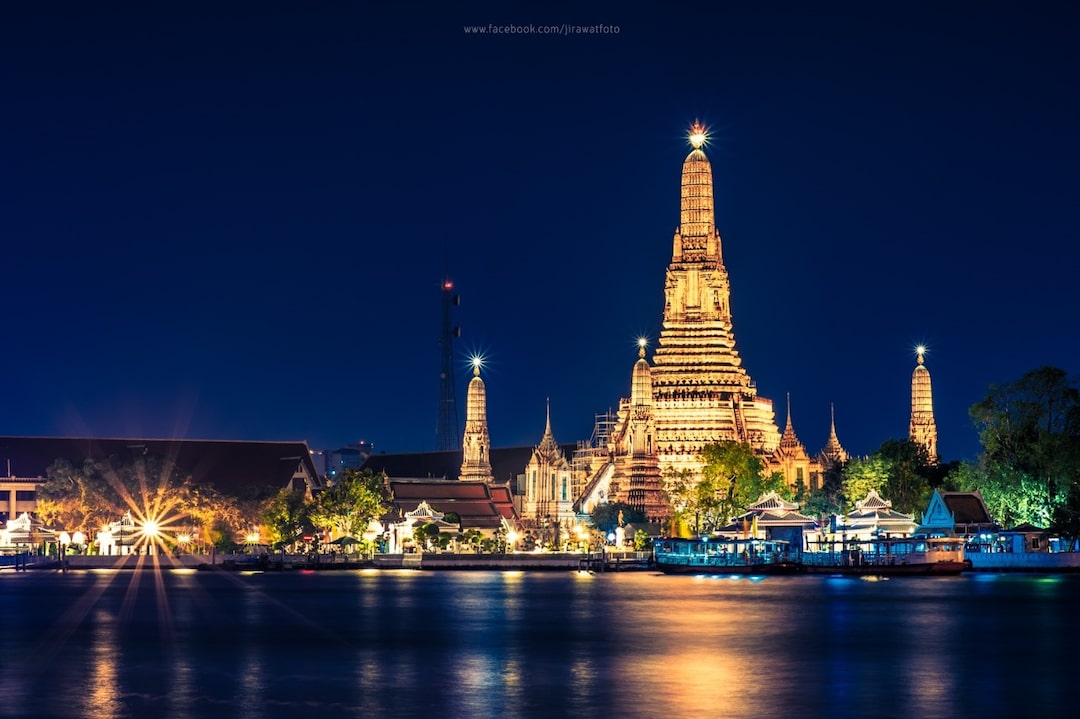 Wat Arun is one of the best temples to visit in Thailand for its stunning view at the time of dawn as well as dusk. Known to most people by the name of “Temple of Dawn”, this temple gleams up with the very first ray of sun. The sight of morning light making the 80-metre-tall prang shine like a gem can be a hypnotizing sight for a spectator. This prang, made with coloured glass and Chinese porcelain, is the major attraction of this Thailand Buddha temple. 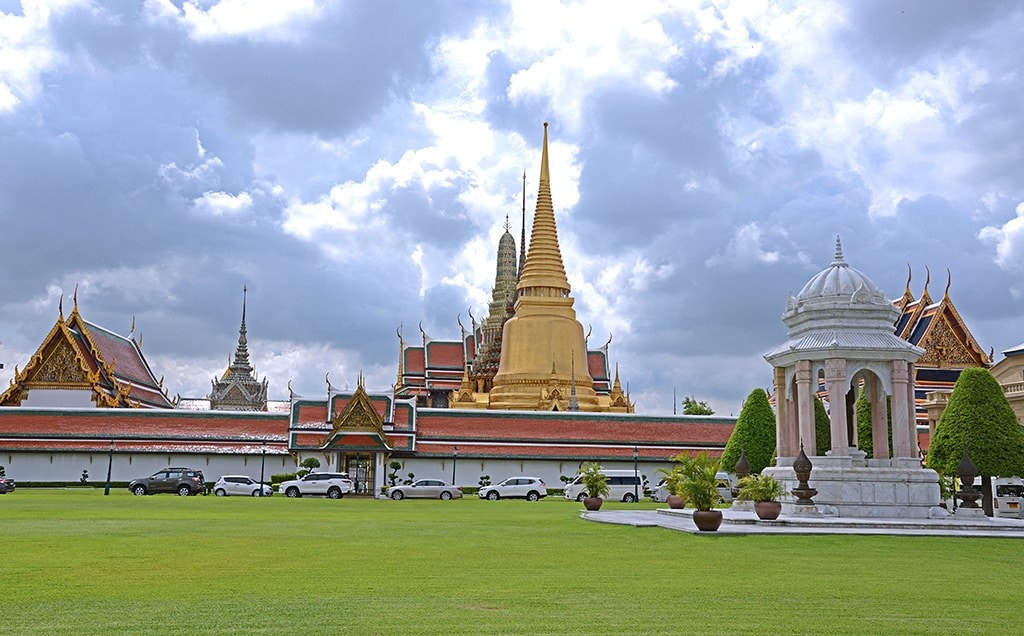 Wat Phra Kaew has a history associated with India. It is said that the Emerald Buddha dwelling in this Thailand Temple originated in India, and the time when it was built, Indian Sage Nagasena foretold that it will prosperity to the country in which it is installed. For this reason, it is one of the most revered temples in Thailand. The temple’s back story is one reason why this temple is visited the most in Thailand. Another reason is its spectacular adornment surrounding the tall Emerald Buddha, a statue carved out of single jade stone and given a meditating posture. 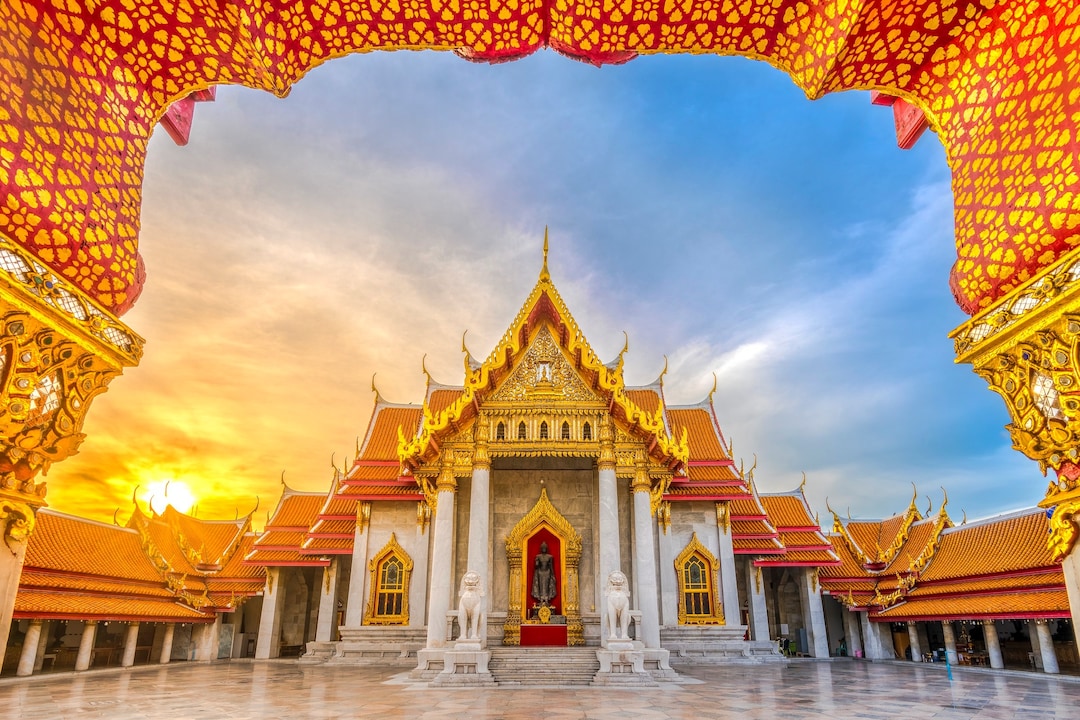 It is a Thailand temple that has interiors influenced by Thai as well as European architecture and engineering. What gives this temple its dazzling beauty is the Italian fine marble it is made with, and for this reason, this temple came to be known as the Marble Temple. Made in Thai symmetrical architecture, this place has red carpets spread on the floor, stained-glass windows and motifs, and paintings made in golden and white colour.

Perched on Doi Suthep Mountain and looking over Chiang Mai, Wat Phra That Doi Suthep is a highly revered Thailand temple. It holds extreme importance in the lives of worshippers as it is said to possess the relics of Buddha. People venerate this place to the extent that they are willing to climb 306 stairs to reach this Buddha Mandir in Thailand. While climbing these stairs, people will experience tranquility and will get to see excellently-carved serpent statues. 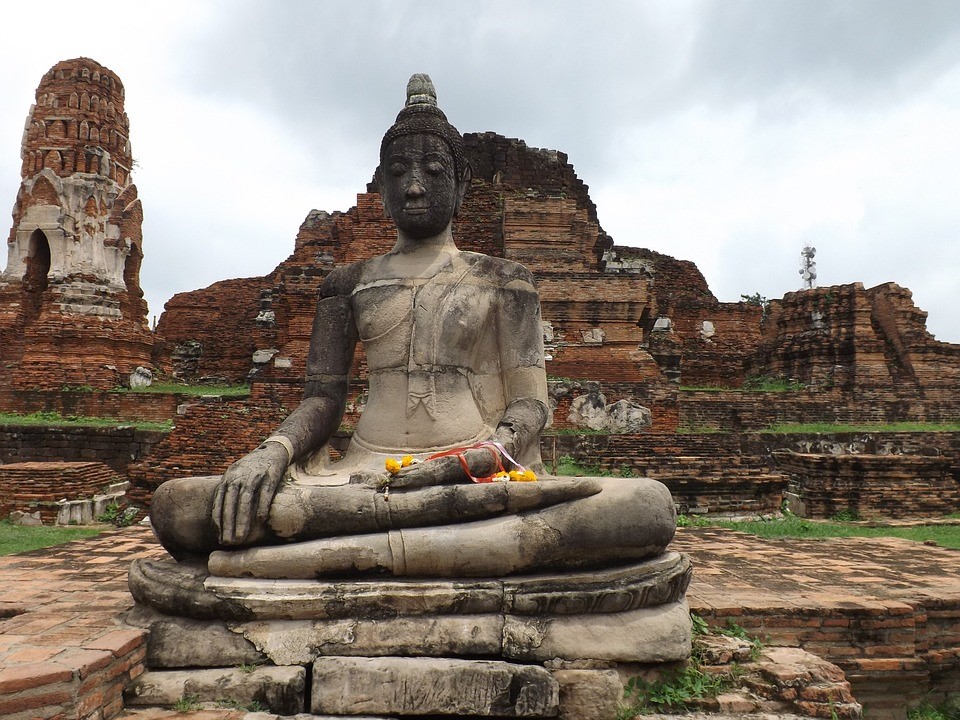 If you want to sneak out from the hustle and bustle of the city, then head out to Wat Mahathat. Its isolated environs can be your perfect escape plan. You can seek immense peace here as this temple is the main centre for meditation. It is a site where relics of Buddha are preserved and therefore, it is known as The Great Temple of Relics. Take a trip of this temple on Sunday and you will get to visit Amulet Market where religious amulets, talismans, charms, and traditional medicine are sold. Even though in ruins, this Thailand temple offers an unruffled experience.

Thailand is the land where Buddhism is widely practiced and emanates from every corner. For this very reason, you will find golden Buddha statues and Buddha Temples built in every city of this country. When you seek peace, this place can be your haven.