10 Best Places to Visit Near Lucknow

Did you know, Lucknow is an anglicised spelling of the local pronunciation ‘Lakhnau’, which is considered to have been named either after ‘Lakshmana’ from Ramayana or after ‘Goddess Lakshmi’?! This capital city, along with Agra and Varanasi forms the Uttar Pradesh Heritage Arc. The city rose to prominence as the home of the Nawabs of Avadh (Oudh), who were great patrons of the culinary and performing arts like dance and music. Today, this bustling city is home to exceptional Islamic and British Raj-era architecture, some fascinating bazaars and amazing food, and is truly a unique mix of the ancient and the modern. An interesting fact is, all that surrounds this city of ‘Nawab, Aadaab, Kebab and Shabab’ is as amazing and spellbinding as the Lucknow sightseeing itself. The places are a perfect blend of spiritual sojourns, historic towns, and wildlife sanctuaries, and make for a perfect weekend getaway. Must-visit for everyone who’s residing in or visiting Lucknow, we bring to you the 10 best places to visit near Lucknow.

Looking for tourist places near Lucknow within 150 km. or so? Ayodhya is the destination to visit! Located about 135 km. from Lucknow, it takes around 2 to 3 hours to visit this birthplace of Lord Rama along with being the birthplace of four of Jainism’s 24 Tirthankaras. Here, you can visit the makeshift Ram Janmabhoomi temple (until the deities are shifted in the proposed grand temple shortly), Raja Mandir, Kanak Bhavan, and Hanuman Garhi Mandir. Moreover, the city is also home to some stunning architectural monuments like Moti Mahal, Gulab Bari and Bahu Begum ka Maqbara along with some amazing museums housing ancient artefacts like Ram Katha Museum and Tulsi Smarak Bhavan Museum. Ayodhya can be visited at its best and experienced in its full grandeur during the festivals of Diwali and Dussehra, which are celebrated with great pomp in the city.

It is believed that sages ‘Sudh’ and ‘Ved Vyas’ had been to Naimishranya and it houses ‘Suth Gaddi’ and ‘Vyas Gaddi’ – the respective places of stay of both of them. Also, must-visit here are Hanuman Gaddi and Pandav Killa – two crucial sites in the Hindu epics Ramayana and Mahabharata. Sitting on the bank of river Gomti, Naimisharanya is therefore substantial in Hindu mythology and receives thousands of devotees each year. Some other important religious sites to visit in Naimisharanya are Shri Lalita Devi temples, Chakra Tirth, Hawan Kund, Sita Kund among many others. This is one of the tourist places near Lucknow within 100 km.

Dewa or Dewa Sharif is world-renowned for the shrine of a Sufi saint – Haji Waris Ali Shah. This small town in the Barabanki district houses the preserved tomb of the Sufi saint with a splendid architectural monument with beautiful interior and is a prominent pilgrim place not only for Muslims but for people of all religions and beliefs, just as Dargah Sharif in Ajmer or Haji Ali in Mumbai. One sight to behold is the ecstatic celebration of Holi taking place at the shrine. Moreover, on the occasion of annual Urs, the shrine also hosts a ten-day fair known as ‘Dewa Mela’. This intriguing celebration takes place in the months of October-November to commemorate the saint. The highlights of the fair are All India Mushaira, Kavi Sammelan, music performances, etc. Located just 25 km. away, Dewa Sharif makes for a perfect one-day trip near Lucknow.

This pleasant tourist attraction is located on the Lucknow-Kanpur highway and is just a little more than 45 km. from the city. So, if again you are looking for a quick getaway from the city, Nawabganj’s Bird Sanctuary proves to be one of the best places to visit near Lucknow. Covered in dense trees, the place is home to several species of domestic and migratory birds like the Siberian Crane, Cotton Teal, White-neck Stork, Indian roller, etc. Here, you can choose to go on a bird-watching adventure tour and also take a look at the bird interpretation centre to get information about all the birds in the sanctuary. There’s also a beautiful deer park housing different breeds of deer and even a reptile enclosure to visit here.

Bithoor is one getaway from Lucknow that packs in something for everyone. Be it temples, ashrams, historic monuments and towns, or even theme parks and water parks, Bithoor has some richly diverse experiences to offer. Situated on the banks of the Ganges, this small township, a little more than 90 km. away from Lucknow, is a place of religious prominence. Visit the Valmiki Ashram and the Siddhi Ashram to dwell in the stories of the epic Ramayana, along with the temples at the Brahmavart ghat and Patthar ghat along with the ISKCON temple. Stroll around Dhruv Teela and Deepa Mallika Stambh to hear some exciting tales. Moreover, also not to be missed is the Bithoor fort and Nana Saheb Rao Park for the history of the town and its importance during the Freedom struggle. And if your heart still yearns for some child-like fun and excitement, there are also a few theme parks and water parks around Bithoor. All in all, certainly one of the not-to-be-missed tourist places near Lucknow.

If you wish to escape the hustle and bustle of Lucknow and are seeking peace and solitude, visit the ancient city of Shravasti. Regarded as an essential place for Buddhism and Jainism, the old part of the city is divided into Sahet and Mahet. While Sahet is a famous site for the Buddhist monastery Jetvahana Vihar and stupas, Mahet is famous for Kachchi Kuti and Pakki Kuti, having a stupa of Anathapindika and the cave and stupa of Angulimal, respectively. Other important Buddhist sites in Shravasti are the Ananda Bodhi Tree, where Lord Gautam Buddha meditated, and Vipassana Meditation Centre. Shravasti also houses stunning Jain temples, such as the Shobhnath Jain temple and Shri Shwetambar Jain temple. This is among the very interesting and important places to visit near Lucknow within 200 km.

Located some 200 km. away, Allahabad is one of the very interesting and best places to visit near Lucknow. This one of the oldest cities in India was originally named Prayag and holds immense religious significance as the three holiest rivers in Hinduism – Ganga, Yamuna and the mystical Saraswati meet here and their meeting point is called Triveni Sangam. The historic Kumbh Mela is also held on the banks of Triveni Sangam, every 12 years. It is believed that taking a dip in the Sangam can wash off all your sins. Moreover, mythology says, Lord Brahma chose this place on Earth for Prakrishta Yagna, which makes it one of the most sacred pilgrim centres in India. With its grand temples, beautiful ghats and age-old monuments like Allahabad Museum, Allahabad Fort, Anand Bhavan, Khusro Bagh, and Hanuman Mandir among others, the city sure fascinates history lovers and pilgrims alike.

Gomti Nagar, located at a stone’s throw away from Lucknow railway station, is one of the largest and upcoming areas of Lucknow. It is situated on the banks of the river Gomti, a tributary of Ganga, which flows through Lucknow, hence its name Gomti Nagar. Talking about the places to visit in Lucknow near Gomti Nagar or rather in Gomti Nagar are its three big parks, namely – Ambedkar Park, Janeshwar Mishra Park and Ram Manohar Lohia Park. Janeshwar Mishra Park is the biggest park in Asia sprawling 376 acres of land. The highlights of this park include – a real MIG-21 aircraft and a battle tank for public display along with a 200 ft. high Indian flag. The Ambedkar park is a mammoth construction of marble, stones and fountain and looks marvellous when lit up at night. Marine Drive (not the Mumbai one!), which is also known as River Drive, located on the banks of river Gomti, with a musical fountain show organised every evening in a nearby park is a great crowd-puller, attracting people from all over the city during evenings. Moreover, the 8 km long Riverfront mega project over here has already been a major attraction for tourists and filmmakers in the city.

If you don’t mind travelling a little more than 200 km. from Lucknow, and are a wildlife enthusiast or even a leisure seeker, National Chambal Wildlife Sanctuary can prove to be a perfect weekend getaway for you. This beautiful sanctuary, surrounded by the Chambal river (known to be one of the cleanest rivers in India) is a habitat of some of the most endangered species, like, Gharial, Red-crowned turtles, Gangetic Dolphins, Indian skimmers, etc. The sanctuary provides travellers with a combination of a unique and unpolluted habitat, abundant wildlife and amazing landscapes, medieval temples and magnificent ancient ruins, animal fairs and Naga Sadhus, all in all, making for a perfect respite from the chaos of the city. There are many options to choose from to explore this nature’s haven – Rent a motorized boat sailing through ravines, sign up for one of the walks around the river and ravines during mornings and evenings, take a normal jeep safari, or even choose from a bicycle ride, camel safari and horse safari. Trained wildlife experts can also accompany you and provide expert information on wildlife.

Along with National Chambal Wildlife Sanctuary, Chitrakoot is yet another place to visit near Lucknow within 500 km. Popularly known as the ‘hill of many wonders’, and rightly so, this small town is situated in the north Vindhyan range and is located over the districts of Chitrakoot in Uttar Pradesh and Satna in Madhya Pradesh. It holds great importance according to Hindu mythology and the epic Ramayana. Legends have it that Chitrakoot was the place where Lord Rama, his wife Sita and his brother Lakshmana stayed for eleven and half of their fourteen years of exile, and it was here that Bharata, brother of Lord Rama came to visit them and asked him to come back to Ayodhya and rule the kingdom. Chitrakoot is also the place where Goswami Tulsidas, author of ‘The Ramcharitmanas’, spent many years of his life. Moreover, adding to the sanctity of the place is the belief that the principal Gods in Hinduism – Brahma, Vishnu and Shiva took incarnations here. Chitrakoot mountain range, therefore, has numerous places of great religious importance like Bharat Milap Temple, Hanuman Dhara, Janki Kund and many more. There are many lively fairs which are organised on different occasions and festivals. There’s yet another reason that makes Chitrakoot the ‘hill and place of many wonders’ for it is also home to the only university in the world specially made for the differently-abled – The Jagadguru Rambhadracharya Handicapped University.

So, this was the list of 10 best places to visit near Lucknow. Whenever you plan your Lucknow tour package, you definitely won’t regret including some of the above places in your itinerary. As you soak in the wonders of the city of Nawabs, rest assured, your amazing experiences just don’t cease there. There’s a lot more to travel to, explore and celebrate in the surrounds of Lucknow. Just make it a point not to miss out on the many hidden gems of Uttar Pradesh. 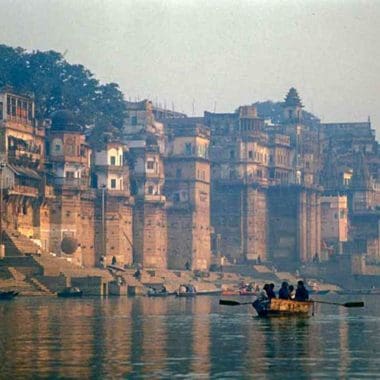