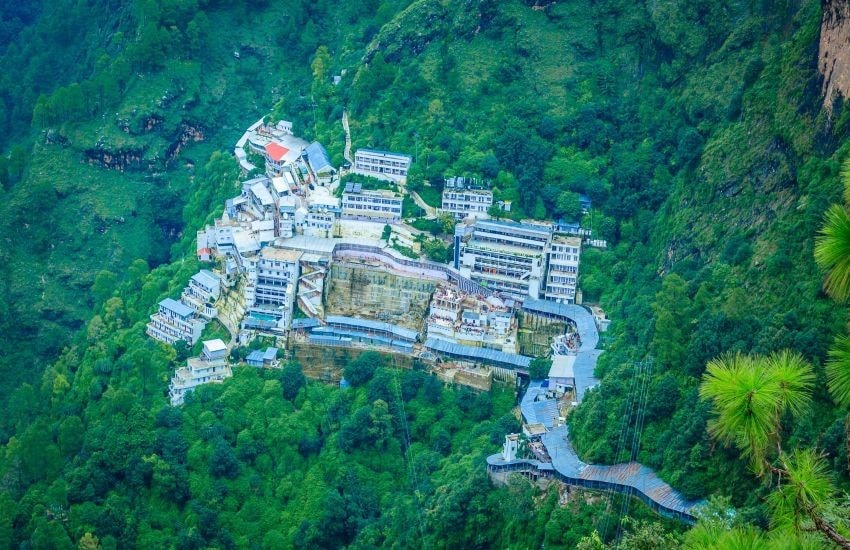 Located in the lap of the splendid Trikuta Mountains in Jammu and Kashmir is one of India’s most visited Hindu pilgrimage destinations, Mata Vaishno Devi Cave Temple. The famed religious site attracts devotees in huge numbers from all over the world, where they come seeking the blessings of Goddess Vaishno Devi as she is said to fulfil all their wishes. Devotees make traditional offerings, including chunri, sarees, dry fruits, gold ornaments, flowers and more. Vaishno Devi Temple is one of the few places on this Earth that can’t be travelled or explored but needs to be lived. Kashmir’s expansive beauty, the city’s grand allure and the temple’s religious vibes, all make it worth the difficult journey here.

Considered one of the most important and sacred temples in the whole of India, Vaishno Devi temple is also an important Shaktipeeth with strong beliefs and connection to the people. In fact, Mata Vaishno Devi darshan is such a big affair among the people of India that month-long delays and overpopulated hotels are a common sight.

It takes a 13 Km trek from Katra to reach the Bhawan, which diverges into two different pathways. The first path goes via the Adhkuwari Temple, which denotes that the pilgrims are halfway through the Bhawan. Its old construction is revealed through the step and narrow passageways. The newer second route goes via Himkoti and is wide enough with an ascendable gradient.

Mata Vaishno Devi temple has rich history and heritage attached to it. The cave’s importance is depicted in folktales which tell that here was Goddess Sati’s skull had fallen and that the goddess resides here in the form of a five and a half feet tall rock which has three heads or the Pindies.

The holy cave at Vaishno Devi temple is said to have been first discovered by Pandit Sridhar, a Hindu priest, who witnessed the Goddess in his dreams and was instructed to find the temple. When the priest found the holy cave, Mata Vaishno Devi appeared to him and blessed him with four sons. He was given the boon of being the custodian of the cave, a commitment locals believe his descendants follow to this day.

The 13 Km long trek to the Vaishno Devi temple cave starts at the Banganga Check post in Katra. The journey to the Bhawan at the top is tiring no doubt but offers stunning views of the valleys and foggy mountains. Viewpoints with places to sit, rest, toilets and eat can be founded after every few meters, or around each of the corners, to ensure your journey is as comfortable as possible. While most devotees embark on the journey on foot, you can also complete it via horses, palki or in a helicopter.

Vaishno Devi helicopter bookings should be made in advance to avoid unnecessary delays and price hikes, but you can also purchase Vaishno Devi helicopter package at Jagjivan Ghat near the Katra Bus Stand. Helicopter services, however, have limitations such as being prone to cancellation due to climatic changes and low availability.

The board overlooks the maintenance of several guest houses, dhams located in Jammu, Katra, Adkuwari, Sanjichhat and Bhawan apart from the bhojanalaya services both in the Main Bhawan and the Manokamana Bhawan Complex. The temple administration also provides cheap and affordable eating options all along the long trek both up and down the cave, including hygienic vegetarian meals, water, hot and cold beverages and more at fixed flat rates.

The Mata Vaishno Devi Shrine Board has started the process of Online Yatra Registration to make the process easy and manageable for devotees.

Through online booking, devotees will be able to obtain all bookings including Yatra Registration slip, Room Bookings as well as Pooja bookings well in advance, online.

To make Vaishno Devi darshan booking online, obtain a Yatra Slip or use any other Online Service being provided on the official website of Shri Mata Vaishno Devi Shrine Board, users will first need to register on the website. It is to be noted that this Yatra Slip is free of cost and will need to be presented at Banganga Yatra check post on your arrival to undertake the Yatra to the Holy Cave Shrine, else you will not be permitted. The Yatra Parchi is valid for a full day to cross Banganga check post.

The Vaishno Devi temple in Jammu and Kashmir is open to the devotees throughout the year for pilgrimage. The temple premises can be entered from 5 AM till 12 PM after which the temple is shut down, and again opened from 4 PM till 9 PM. The traditional Aarti, which is the main reason for huge queues in the Vaishno Devi darshan, takes place both in the mornings and evenings, right before sunrise and sunset.

The aarti at Vaishno Devi is an experience out of this world that should be experienced in person. But if for any reason you are unable to visit the holy Mata Vaishno Devi Temple in Katra, you can enjoy the divine experience live at your home. Vaishno Devi live darshan broadcasts the daily aarti and pooja on TV for millions of people to enjoy from the comfort of your home.

The Aatma Pooja, meant for self-cleansing, is conducted by the temple’s priests and marks the start of the Pooja. The Goddess is then bathed with water, ghee, milk, honey and sugar, after which the Goddess dresses up in a saree, chola and chuni amidst the holy echoes of chants and shlokas. Aarti is conducted once inside the main shrine or the sanctum, and then outside the cave where the devotees waiting in long queues get the first glimpse of divine procedures.

Although the Vaishno Devi, Jammu is open to pilgrims throughout the year, the best time to visit is during the months of March to June, and then from October to November.

These months encounter several festivals which ensure a better traditional experience. However, many pilgrims are seen visiting the holy temple during these months and hence it is recommended to make your bookings in advance to avoid cancellations.

The months from June to October are not considered ideal as these are prone to heavy rainfall which brings with it the risks of frequent landslides, and road blockages, making the conditions far from ideal. Similarly, the months from December to March encounter harsh winter conditions with sub-zero temperature levels and it’s best to avoid visiting Vaishno Devi temple during these months.

Dedicated to Goddess Vaishno Devi, a form of Goddess Durga or Shakti, this cave temple holds immense importance in Hindu mythology and celebrates major Hindu festivals, especially Navratri with high glory. When visiting this extraordinary state, it is highly recommended that a holy trip to the Vaishno Devi temple is included in your Jammu and Kashmir tour packages for a divine experience. 14 Magnificent Temples in Puri for a Divine Pilgrimage