Thanjavur is a town of rich history, culture, and art, nestled in the Cauvery Delta, around 300 kilometres southwest to the metropolitan of Chennai. The town carries a legacy of South Indian art and culture in its mesmerizing temples and architecture, which you can explore while sightseeing in Thanjavur. The history of the town is vivid, with a belief of the town being as old as the 3rd century AD. According to most Thanjavur tourist guides, the town also finds early mentions in texts from the Chola period, after which the grand destination was almost forgotten.

Thanjavur, also known as Tanjore, rose back to power during the early 1800s and that is when the immortalisation of the town in South Indian history began. A temple dedicated to the goddess Nisumbhasudani was also established during this period. With time, Thanjavur went through the rule of several empires, including the Pandayan kingdom, the Delhi Sultanate, and even the Maratha Empire. It is during this period of change that the town constructed several temples to decorate and commemorate its rich and vivid history, which also form a major part of local sightseeing in Thanjavur. 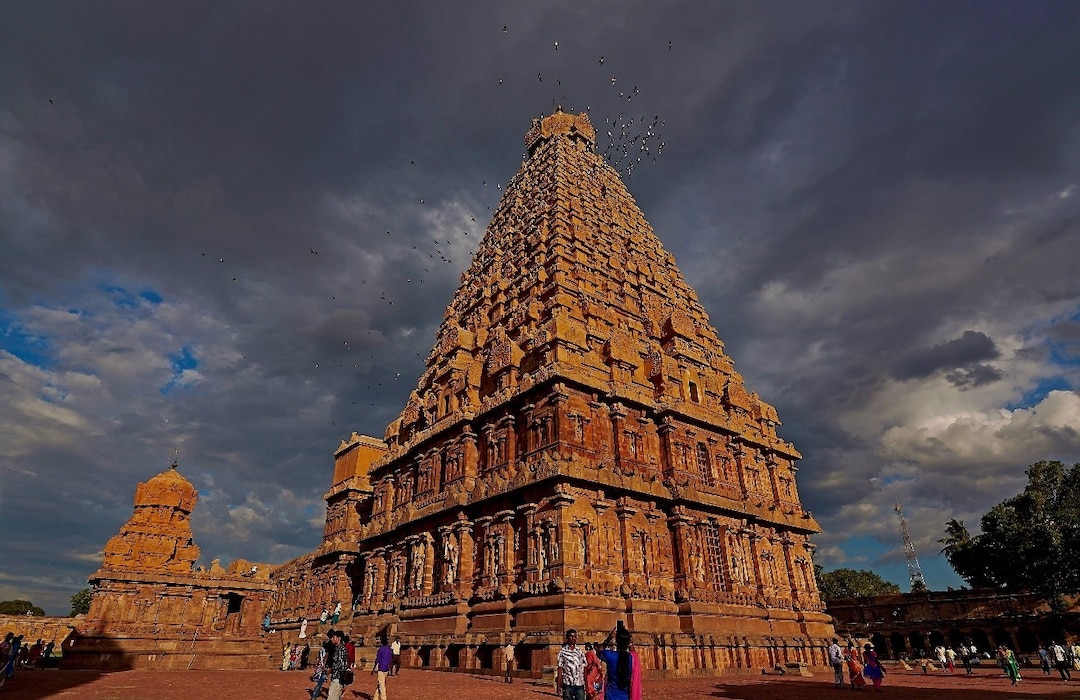 The Brahadeshwara Temple is one of the most famous tourist spots in Thanjavur, so much so that any list of tourist places in Thanjavur is incomplete without it. Built in the period from 1003-1010 by the Chola King, Raja Raja Chola I, this temple is an amazing example of Dravidian architecture and art. Dedicated to Lord Shiva, the temple is one of the largest temples in South India and attracts thousands of pilgrims and tourists each year on Thanjavur sightseeing.

Built on the banks of the Cauvery, the temple is a grand sight to behold. With its pillars, murals, and sculptures representing the great prosperous period of the Chola Empire, the temple stands tall at a massive 66 meters and the Shikhara of the temple is a 16-storey tower dotted with sculptures and art. The temple also hosts several paintings, murals, and iconography, both for artistic representation and religious sub-text.

The temple houses one of India’s largest idol representations of Lord Shiva in the Linga form. Standing at a height of 29 feet, the primary idol is massive and occupies 2 storeys of the grand temple. Being one of the most important sightseeing places in Thanjavur, the temple is a must-visit on your trip to this amazing town. The Bangaru Kamakshi Temple is among Thanjavur’s popular religious tourist spots, located centrally in the town of Thanjavur. Famous for its history and the idol that it houses, the temple stands witness to the great artistic feats of South India during the mediaeval period. ‘Bangaru’ translates to ‘golden’, which means that the name of the temple translates to the Temple of Golden Mother Kamakshi.

The story behind the deity and her idol is such that it spans the entire region of South India. The golden idol of goddess Kamakshi situated in the sanctum sanctorum of the temple has travelled to several towns after being placed in the temple. Originally commissioned for a temple in Kanchipuram, the idol is made from solid gold and is an example of excellent craftsmanship. The idol was moved from the Kamakshi Amman temple of Kanchipuram, owing to the continuous attacks and invasions from Islamist regimes in the north. In order to do so covertly, the entire golden idol was covered in a black substance. Today the entire idol shines as bright as the sun, but the face of the idol of goddess Kamakshi is still covered to commemorate the idol’s history and the story of how it came to the town to become one of the important local sightseeing places in Thanjavur. Built partly by the Nayaks and the Marathas in the early 1550s, the Vijayanagar Fort has been among the top sightseeing places in Thanjavur. It is among the most popular Thanjavur tourist spots owing to the history it has witnessed. When it comes to local sightseeing in Tanjore, the fort is counted among some of the most famous spots in the town. Within the fort, you can also explore the Tanjore Palace, Sangeetha Mahal, and Shiva Ganga Gardens.

Tanjore Palace was built by the Nayaks and was briefly also their primary residence up until the Maratha Empire annexed Thanjavur. Thereafter, the palace was known as the Tanjore Maratha Palace and served as the official residence of the Thanjavur Marathas.

The fort also houses the Saraswathi Mahal Library, which is described as one of the most remarkable libraries across the Indian subcontinent. The library dates back to the 16th-17th century, when, much like the Tanjore Palace, it was constructed by the Nayaks and later nurtured by the Maratha rulers. The library holds books and written compilations from medieval India, recording the culture and art from those periods. Stories, lore, and texts about gods, saints, wars, and weapons from that era can be found intact in the grand library.

The rest of the fort is mostly in ruins having suffered the ravages of time but still holds on to its share of history. The fort is an integral part of local sightseeing in Tanjore and must definitely be on your list of tourist places to visit in Thanjavur. 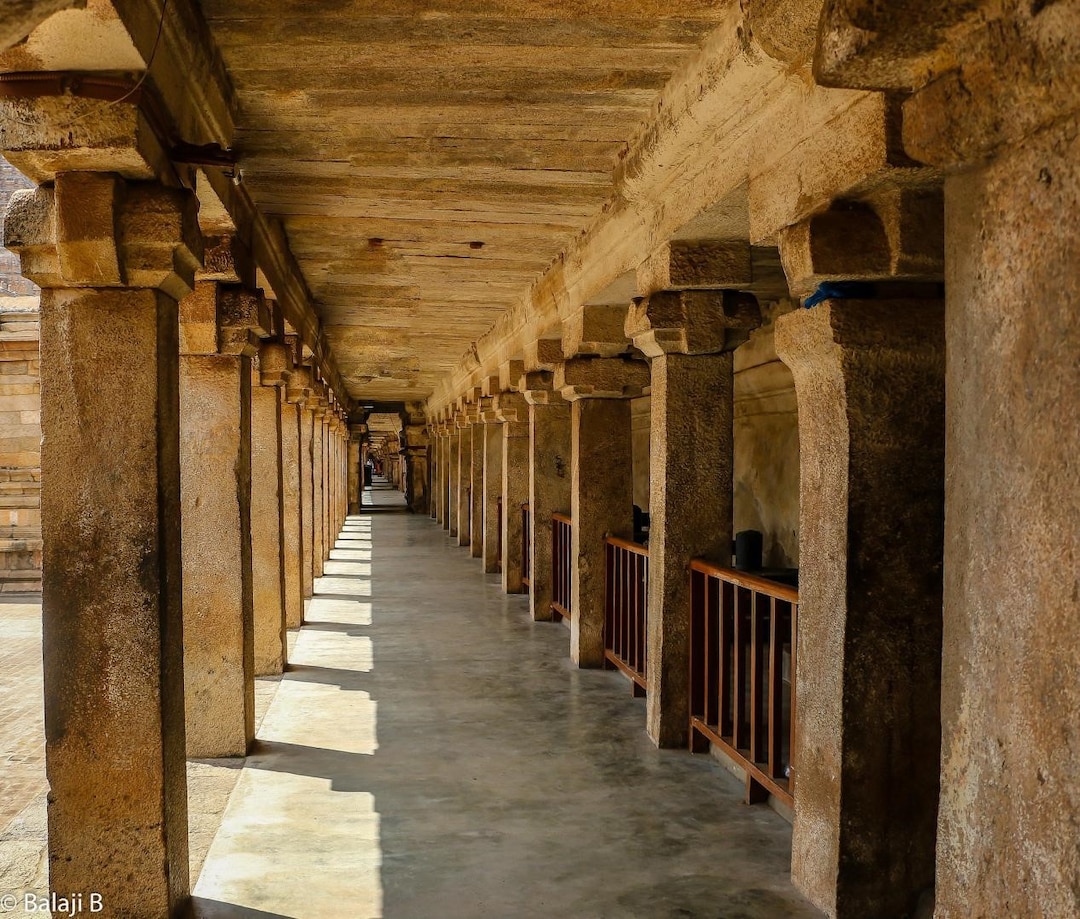 Thanjai Mamani Koil is another gem in Thanjavur’s list of religious tourist places. A total of three temples together comprise of the Thanjai Mamani Koil. The group of temples is famed and known throughout the sub-continent due to their status as Divyadeesam. This Thanjavur sightseeing destination is one of the 108 places in India that are considered to hold high significance in the Vaishnav faith. All three temples are located close to each other, with an idol of Lord Vishnu in his Narasimha avatar. The temples, arranged in an inverted L-shape, hold idols of Lord Vishnu with his consort, Goddess Mahalakshmi. The idol of Goddess Lakshmi is placed on the right side instead of her usual position towards the left, signifying the anger that Lord Vishnu had when destroying the demon king Hiranyakashyap.

The temple is adorned with statues and sculptures of other gods and goddesses who are relevant to Lord Vishnu’s avatar of Narasimha. Even human representations of individuals from legends, such as Prahlad, a devout believer of Lord Vishnu, Hiranyakashyap, and even Anjaneya Hanuman can be witnessed at the temple. For all this and more, this place is quite a popular tourist spot in Thanjavur.

The aim of this brief tourist guide for Thanjavur was to give you a fair view of the experiences awaiting you here. Thanjavur, although known specifically for its grand temples and architecture, offers an amazing experience when you visit during the winter months as well. The cool and calm atmosphere of the town and the numerous spots for sightseeing in Thanjavur make it special for plateful of reasons.