Cocooned amidst the breathtaking snow-covered hills of the Himalayas, the Hadimba Devi Temple is a unique temple dedicated to the Hidimba Devi, who is known as the protector of the dense forest. Manali is a popular getaway destination among families and honeymoon travellers who want to experience the crisp, cool air covering the majestic mountains. For a glimpse of the splendid beauty in Manali, there is no better way to begin your journey than a visit to the breathtaking ancient Hadimba Temple. Locally known as the Dhungari Temple (Dhugari means rock), the temple’s architecture is entirely different from any other temple in Manali. This little tourist attraction has risen to so much popularity over the years that travellers believe their sightseeing is incomplete without a visit to the Hadimba Temple Manali. The Hadimba temple was named after Hadimba, a ferocious demon who ruled the area around the ancient temple. Hidimba and her brother Hidimb created havoc in the surrounding villages, and the villagers lived in fear during their reign. The Hadimba temple story started when Hadimba was reluctant to marry a person who had the willpower to kill the mighty Hadimb. One day, Bheema and his brothers were passing through the forest and fell in love with Hadimba. After killing her brother, Bheema married Hadimba and gave birth to their son Ghatotkach. Bheema then left and joined his brothers in exile, while Hadimba decided to stay back and nurtured their son till he attained adulthood. Once Ghatotkach became an adult, Hadimba left for higher summits in the Himalayas and meditated deeply to vanish away all her sins. She worshipped goddess Durga with such devotion that she could transform herself from a demon to a deity.

The ancient Hadimba temple is built in pagoda shape with flat roofs. The roof at the top is conical in shape, and the other roofs are covered with timber tiles. The temple architecture is made mainly of wood and stones.  The doors of the temple are intricately carved, and there is a 24- meters high wooden tower above the temple. The temple entrance door is adorned with carvings of Goddess Durga, and the base of the temple is made of whitewashed stones keeping the temple cool even during scorching heat. Keeping the interiors of the temple simple, the walls are decorated with carvings and figurines of Hindu gods and goddesses and various animals, etc. The temple also consists of a huge rock believed to be a meditating place of Hadimba Devi. History enthusiasts and archaeology personnel consider the Hadimba Devi temple as one of the iconic places to visit in Manali. 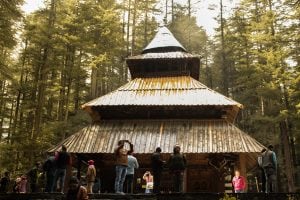 Hadimba Devi is considered a mountain deity among the locals and is worshipped by them immensely. The villagers seek her blessing before any special occasion and always offer prayers to appease her if any calamity or hindrance hits the village. Since Hadimba Devi is considered an avatar of Goddess Durga, the people of Manali worship Hadimba Devi in the temple during the auspicious occasion of Navratri. During the Dusshera festival, the deity’s idol is taken to the Dhalpur Maidan, where she blesses the ceremonial horse. The tradition is called ‘Ghor Puja’ locally among the villagers. Visitors can relish delicious local food during the festival month at the temple.

Timings and Distance from Manali to Hadimba Temple

The temple is just 2 km away from the city centre of Manali and can be reached via bus, taxi, autorickshaw, or even by foot. The nearest airport to the temple is Kullu Manali Airport which is 52 km from the temple. The temple gates are open every day from 8 AM to 6 PM. You can book your Manali tour package and hire a taxi to reach the temple from the airport. The Hadimba temple is operational throughout the year and welcomes travellers from all parts of the world. The calm and pleasant weather of Manali welcomes travellers throughout the year.

A trip to Manali is incomplete without a visit to this breathtaking temple in the Himalayas. Children too might enjoy taking pictures around the temple with local animals like fluffy rabbits and mountain goats. After a relaxing day at Hadimba temple Manali, travellers can walk down to Mall road, just 2 km away from the temple. The Mall road boasts fine dine-in restaurants and cafes to give you a taste of the local cuisine. The narrow lane also consists of many handicraft shops where you can shop local craftsmen handicrafts and take back some with you to gift to your friends and family. Unlock the beauty of the Himalayas by visiting the magnificent Hadimba Devi temple once in a lifetime. 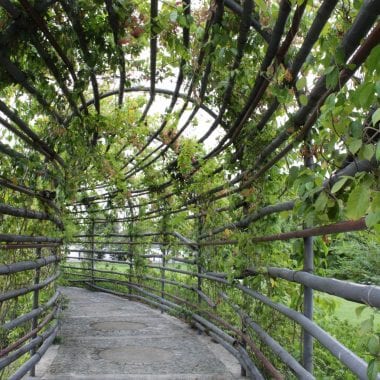 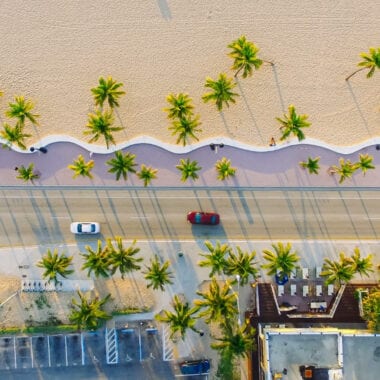 10 Beautiful Beaches in Florida That You Must Visit